Summer is great for spending time with our families– I had a great time visiting my grandparents with my mom and dad earlier this month.

My dad was definitely the person who most encouraged my comics habit when I was a little kid– and his stepmother always had a refrigerator covered with Family Circus cartoons.  My mom’s parents– the ones I visited– used to clip and save all the comics that didn’t show up in my own local paper, which is how I read Prince Valiant as a child.

This week, I asked our cartoonists to tell us a story about their family– or a family in their comics.

My older brother changed my life at age 4. Pete pulled a huge cardboard box out of and old trunk and it was chock full of comic books. He told me I could only look at one at a time. [I couldn’t read yet but the pictures told the stories.  I started drawing then and there and I’m still doing it.

The penguins left their families behind when they emigrated to the Arctic Circle. Oscar would like a family, but he’s not very good at dates and has even resorted to a Russian Mail Order Bride (a budget version).

My parents were very supportive and helpful with my career. First of all they were both artists and sold their art on the side. They gave me a room in the house for my studio and storage in the attic for my collection. My father was an architect but was also a musician, a writer, poet, and had wanted to be a cartoonist. He wrote a poem every morning and would take it to the Kansas City Star for publication. He’d take me with him and I’d visit the five cartoonists on the staff. I’d show them my work and they’d give me suggestions. When I sold a cartoon to a magazine when I was 11 years old, I got excited and dropped out of school. My parents tried to get me to got back to school but I wouldn’t go and I began selling cartoons all over the country and was written up with my picture at my drawing board in newspapers mationally. I was a pro at 11. I finally returned to school because I learned that writing was a big part of cartooning and I needed to study it.

Back in 1997 my Uncle Al figured he could write and draw as well as I. I let him try. Here’s a link to the full story

You want a family story? Here’s one: my Mother had a Zippy tattoo on her left shoulder, which I designed so I didn’t have to look at a bad Zippy tattoo!

My wife Teri provides crucial feedback to the creation of my strips. Every week I write more gags than are needed, but her contribution goes beyond simply choosing the best ones to use. She tells me when a storyline isn’t working, which prevents me from wasting time going down a blind alley. Sometimes I get too close to the characters, and her comments help me step back and see the Big Picture. We have a system in which she grades each gag either a 1 (use it) or a 2 (don’t). Over the years I’ve learned to disregard her input at my peril.

Of my four brothers and one sister, I was the problem kid. No doubt many times throughout my childhood and teen years, my parents lamented, “What are we going to do with Jeff?” I wasn’t much of a student, and spent my time devising elaborate ways to escape homework, yard work, and anything remotely considered work. It would often take me as much time getting out of doing the work than it took to get the job done in the first place. After I finished school, I lived with my parents, with no real job, and no real prospects other than committing entire Monty Python sketches to memory. I was basically a “Dustin.”

Most parents would’ve been terrified at thoughts for the future with a kid like me, but my parents saw something in my obsession with cartoons. Mom and Dad both encouraged me to pursue my dream. They always saw cartooning as a serious endeavor, and saw how serious I was about it.

And another big plus, my parents were two extremely talented people in their own right.

My Mom is a tornado of creativity. She can “whip up” amazing stuff using everything from papier mache to foam egg cartons, plus, she is one of the finest seamstresses ever. She once made us all an amazing set of marionettes for Christmas, so that we might expand our creative minds by putting on elaborate plays of medieval melodrama where the heroic dragon or wrongly-reviled witch would vanquish the meek, good, and virtuous. Mom never thought she was much of an artist, but she is really quite good. When we were very small, she liked to play a little game to keep us quiet whenever we were waiting at a dentists office or something. Mom would pull out a small piece of paper and draw a little doodle, then asked us to guess what the picture was — a kite, a boat, a broom, a plate of bacon and eggs. Depending on how long the wait was, the piece of paper would be filled with fun little doodles. It could be said my Mom invented Pictionary.

My Dad in turn was a master craftsman. He could fix, design, and build anything imaginable, always to perfection. Dad made bedroom furniture and toys for us kids, including a huge, working stage for that marionette set Mom made. How he was able to build a 4′ x 8′, large-scale slot car track table in the basement, and keep it a secret until Christmas morning evades me completely to this day. I still have a genius display case Dad made in the shape of a Buckingham Palace guard house to show off my regiments of Britains toy soldiers — he also built my first drawing table. In his youth, Dad was a skilled draftsman, and throughout his life he had the most beautiful block-lettering hand I ever saw. He was also a huge fan of the daily comics, and a would-be cartoonist deep down. When he passed away, we found thick, three-ring binders filled with every one of my editorial cartoons and “Dustin” strips he had printed out and saved.

I owe everything to my Mom and Dad, my creative genes, my determination, my humility, and my good looks. Their love, patience, and support for me, and for all of us kids, was nothing short of superhuman. And amazingly, they did it all without using swear words or booze.

Now… don’t even get me started on the beyond-measure role my wife, Pat, has played in my life…

Several years ago, my son, Jordan, worked at a local supermarket for a time. Marcus had a asked me to do a couple of daily panels while he was on vacation. Coincidentally, a couple of the gags had supermarket settings so I thought I’d feature my baby boy! lol! 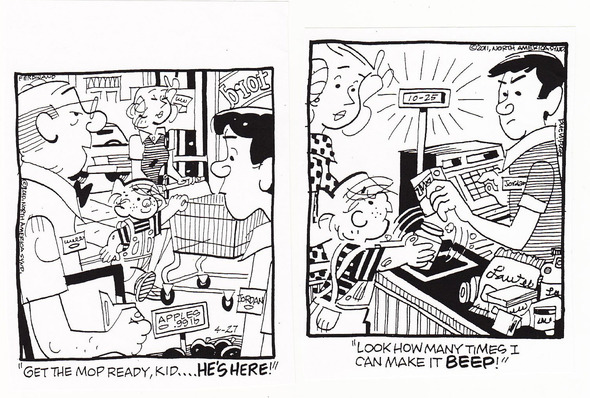 I have written before about how supportive my family has been of my cartooning, but this support extends beyond my immediate family and into my extended family, as well. I grew up in Virginia, but from the age of 12 until I was in college, I spent a portion of each summer with my Uncle Ronnie and Aunt Mary Ellen in Orlando, Florida. I worked for their family businesses and, when I was older, for Walt Disney World (in the hotels) while there. When I first started visiting them, I was too young to drive so they transported me everywhere. They were very encouraging to me as a young cartoonist and took me to Jim Ivey’s Cartoon Art Museum very frequently during my visits. It was on the other side of Orlando from where they lived and I would spend all day there! They would drop me off in the morning and pick me up in the evening. It was my first exposure to seeing professional cartoonists’ original art. I was especially amazed to see the comic strip artwork! I even got to watch Jim Ivey draw some cartoons. In addition to museum owner and cartoonist, Jim Ivey, they also introduced me to Orlando Sentinel cartoonist, Ralph Dunagin (The Middletons, Grin and Bear It), in the lobby of the Orlando Sentinel one day. He was so nice to spend time talking to me. And, of course, they took me to Disney World many times during my visits. Those were wonderful times! Thank you Uncle Ronnie and Aunt Mary Ellen!