Welcome back to the Comics Kingdom Blog! I’m your Comic Strip Critic, here today with a question for the King Features Archivist.

And gosh darnit, the Archivist just answered a question about Flash Gordon a few weeks ago. I love Flash to death, and am reeeeally hoping that the upcoming movie is a runaway success.

Anyways! My question for the Archivist is below:

The oldest comic in my collection is Fontaine Fox’s Toonerville Trolley, a delightfully charming old comic my late grandfather gave me. I have heard a bit about Toonerville being in other non-comics media, but aside from a few scant pictures of tin models, board games, and a few animated shorts on YouTube, I haven’t been able to find much. What can you tell me about Toonerville’s media presence?

Which the Archivist was then kind enough to answer in today’s post. Thank you, Mr. Archivist!

Great question, Comic Strip Critic. It’s not unusual that Fontaine Fox’s Toonerville Trolley still has fans. I guess everyone knew “Toonerville Folks” because it was about the various citizens of the town, all with some unique characteristics easily relatable to real people, that made great fodder for gags.

There was the amazingly strong but dimwitted Powerful Katrinka, the joy-killing Grandma the Demon Chaperone, the terrible tempered Mr. Bang, and more. But the most memorable of Fox’s creations were the trolley and the whiskered old man that ran it, The Skipper, as well as street tough Mickey McGuire. 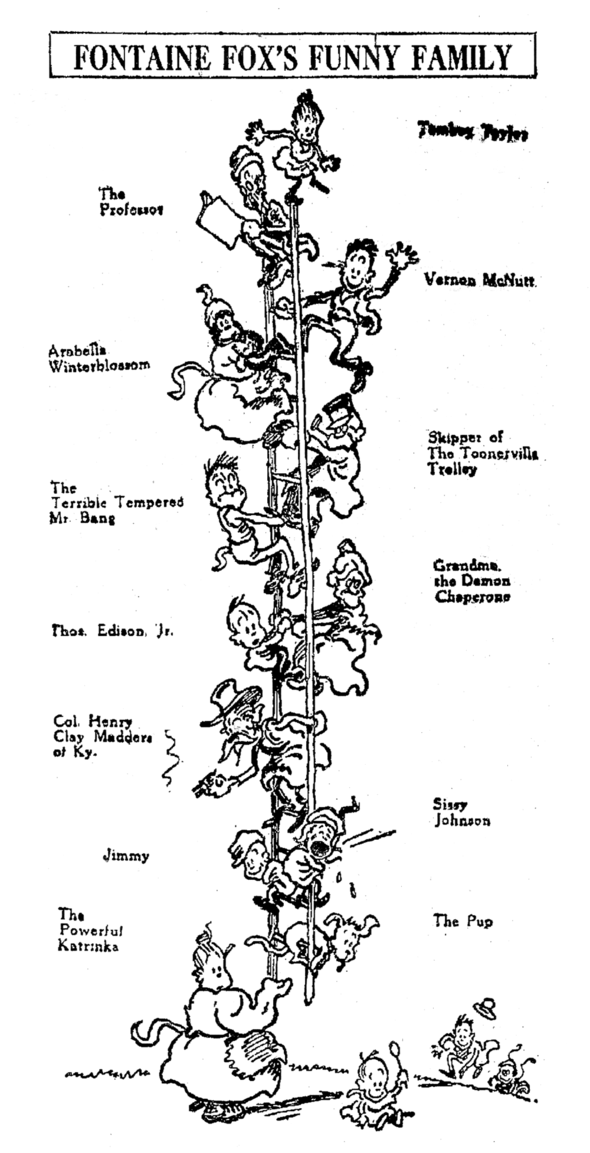 SOME OF TOONERVILLE’S MORE PROMINENT CITIZENS, 1919

The trolley that served the good folks of Toonerville was a spindly, ancient contraption held together by spit and wire, and run by the cantankerous old Skipper who could slow down or suspend service on whim. It struck a chord with the public, and the term “Toonerville Trolley” became a synonym for a poorly run train line. For instance, the Long Island Railroad was routinely described as such.

Mickey was the terror of the town, a bully who fought the local boys, teachers and truant officers. He could show up most anywhere, but never seemed to have a home to go to. 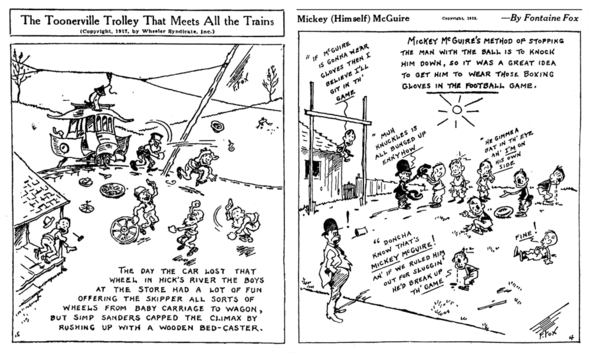 These characters were hugely successful from the World War One era until Fox retired in 1955. Dolls, mechanical toys, games, product endorsements for things like Coca-Cola and Post Cereals were part of Fox’s success, as well as movie ventures.

The Skipper had a short series starring Dan Mason made by the Betzwood film company, located near Philadelphia. They were cheaply made from 1920-22. And there were three color animated cartoons of the trolley made in 1936 by VanBuren studios. They were well made, but the place went out of business in 1937.

A more memorable group of films were based on Mickey McGuire’s career. In the storyline, Mickey’s rival was hated rich boy Stinky Davis. Both had kid gangs, (Mickey’s were known as “The Little Scorpions”) , but were so broadly portrayed, nobody would confuse them with Our Gang.

They were launched in 1927 by small time producer Larry Darmour. The lead was Joe Yule Jnr., better known as Mickey Rooney. The live-action short subject series was probably the most successful inspired by a comic strip, transcending silent to sound, finally ending in 1934. Mr. Rooney, who only passed away three months ago at age 93, was the last leading man from silent films. 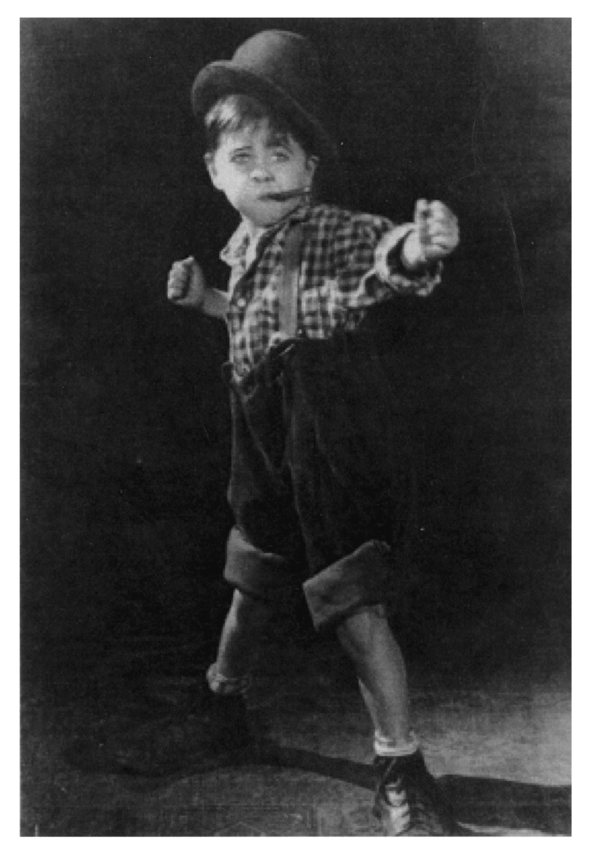 Fox’s creations were not unique in their multi-media successes, but perhaps his were unusual in that he was independent of any large syndicate organization behind him as we have at Hearst.

The popularity of the two new mediums, comics and film, insured they’d come together early on.

The first strip-based film was The Katzenjammer Kids In School (1898), and by the dawn of Hollywood, comics were a mainstay of film plots.

Hearst had launched animated cartoon versions of Krazy Kat, the Katzenjammers, Happy Hooligan, etc. in the 1910’s, and various strip stars followed, the most famous being Popeye.

As for the live action films, they weren’t exactly high prestige projects, mostly relegated to cheaper producers, and are definitely not in the Buster Keaton or Laurel & Hardy class. King Features characters were sometimes seen, but wisely managed and licensed to better a grade of film. Larry Darmour made a Barney Google and a Toots & Casper series, for example.

There were series based on Chicago Tribune’s Winnie Winkle and Public Ledger’s Hairbreadth Harry made by the Wiess brothers. Anything made by another pair of brothers, Julius and Abe Stern, at Universal Pictures was cheaply made. They put out a Buster Brown series and two based on George McManus creations, Let George Do It and The Newlyweds and Their Baby. Interesting to note: all three strips had been discontinued years before the films began.

The most popular strip in the world for decades was McManus’s Bringing Up Father, and it was a licensing bonanza for just as long. In its early years, there were stage productions based on it, and one of these plays, Jiggs And The Social Lion, was filmed in 1920 by Slapstick empresario Al Christie, starring comedian (not the “Crying” tenor) Johnny Ray.  It worked out well enough to set off two more films, Jiggs In Society and Father’s Close Shave. It seems Mr. Ray’s health prevented further entries. Eight years later, an MGM feature version was made starring character actor J. Farrell MacDonald with Marie Dressler and Polly Moran.  It pretty much came and went without much excitement, probably because at that moment, all the attention was on films with synchronized music and sound effects, talkies and the short lived phenomenon of hybrid part-talkies. The last silent offerings were lost in the background somewhere. 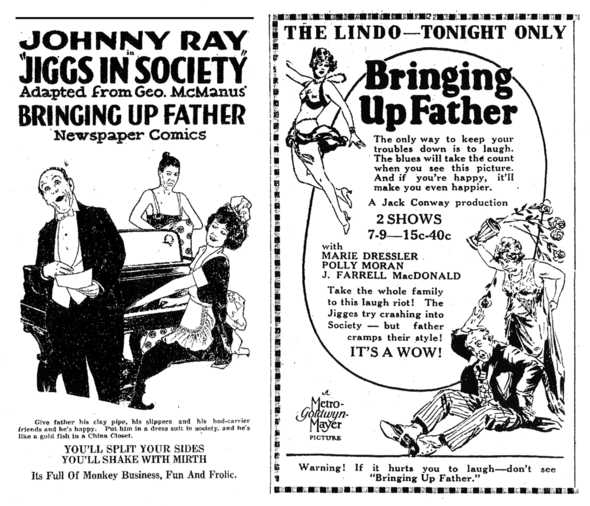 It took eighteen years for Jiggs to return to the screen, this time at studio Monogram, home of b-cowboy movies and The Bowery Boys. The lead this time was old vaudevillian and minor actor Joe Yule, Snr., Mickey Rooney’s father. Maggie was played by Renie Riano, who unfortunately was perfect for the part, being a dead ringer for the cartoon battleaxe. McManus himself always found a way to make a gag appearance in these films.

The years had been great to Mickey, now no longer playing comic strip characters, but a first rank major star of such classics as Boy’s Town (1938) and The Human Comedy (1943), as well as the Andy Hardy series and famous co-starring appearances with Judy Garland.

But Mickey’s Father never rose to any such heights, though he had a lot of work at MGM so long as Mickey was there.

The five Monogram Jiggs and Maggie titles were his only starring vehicles, and the series ended, just like his predecessor, when his health broke in 1950. 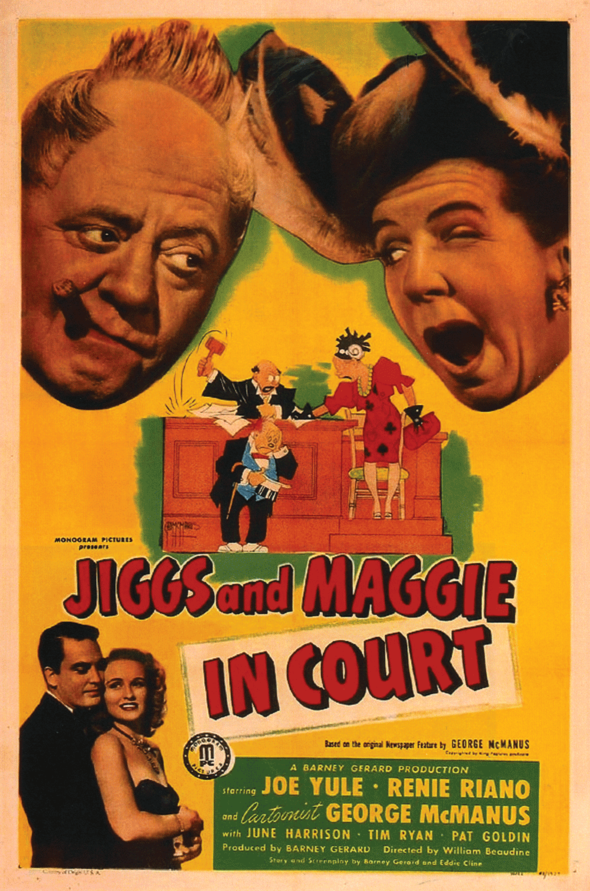 A ONE-SHEET FOR THE THIRD OF THE FIVE MONOGRAM FEATURES, FROM 1948.

Below are some of your comments and questions from last week’s post:

If you liked last week’s dichotomy, a second helping is being warmed up for Thursday next.

In my lifetime, I have known people who were adults in the 19th century. It seemed incredible that they lived before film, electricity, automobiles and indoor plumbing, yet lived to see the atomic, and then the space age. Yet, in my lifetime, the arrival of the computer age has little of the magic that space travel held.

All the strips were created pretty much about a month in advance, and still are. Though you will notice some strips, perhaps inadvertently, mentioned the moon in some way.

We will keep in mind your wish for Ponytail and the good doctor. Perhaps later this year we will consider what new titles will be added.

THE ARCHIVIST, WITH SPECIAL HELP FROM THE COMIC STRIP CRITIC