Ask the Archivist: “The Smith Family” 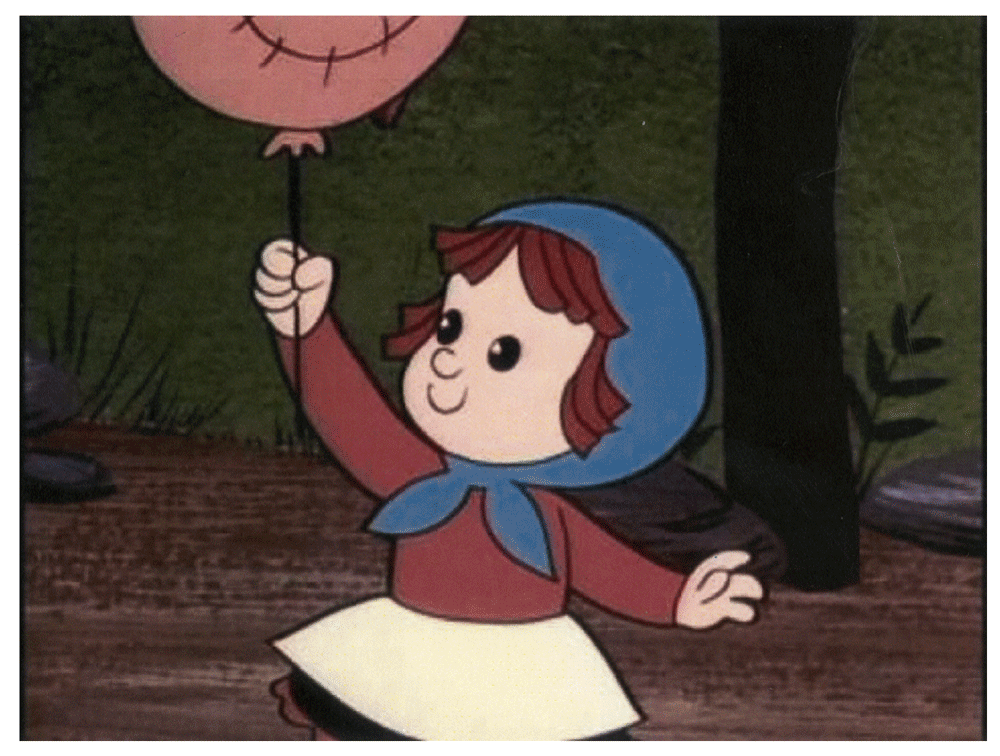 In answer to our friend Little Lulu’s query of a few weeks ago,  Loweezy & Snuffy were married when we first came across them in 1934, living with their nephew, Jughaid.  Perhaps because he was one of Billy DeBeck’s creations, Fred Lasswell, who took over in 1944, felt obliged to keep him as a permanent guest in Snuffy’s house, but he wanted to expand the cast himself.

Perhaps not his own idea was a new addition in 1964, when out of the blue, a niece appeared. She was a small girl in a homespun headscarf and matching long dress named Bizzy Buzz Buzz.

In the 1963-64 TV syndication scene, we at King Features, coming off our hugely successful Popeye series, put out the new offering of  Barney Google And Snuffy Smith, Beetle Bailey and Krazy Kat cartoons. In four of the Snuffy efforts, Bizzy shows up.  It is established she is from Loweezy’s half of the family, her mother being a lady named Martha, I guess Loweezy’s sister. 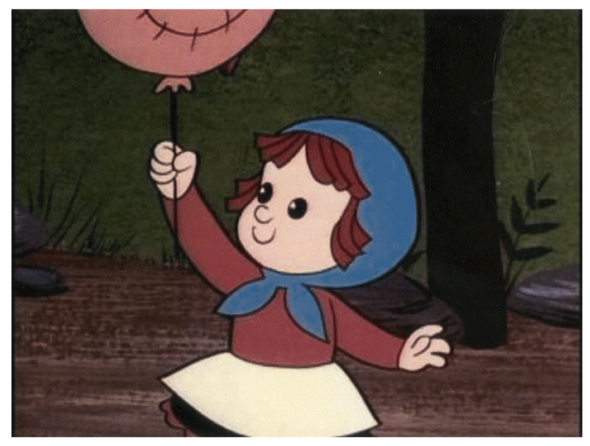 And Bizzy she was, a tiny human dynamo of activity, sweeping and cleaning and cooking and sewing — a regular demon homemaker. So much so, she was unstoppable. She tracked mud in the house so she could scrub the floor again. She dusts trees.  She dresses up a cave in the woods with portieres. The voice talent in these cartoons (and the voice of Krazy Kat too) usually fell to Penny Philips, who had one of the oddest, mush-mouthed deliveries in talking animation history. She decided to give Bizzy a Swedish accent, belying the Ozark surroundings. To give her a gimmick for kids to identify, she makes a buzzing sound in place of some words in songs she sings.

Her appearance in the actual strip lasted only three weeks of Sundays in October and November that year. This would indicate that Lasswell had little to do with her creation, or for that matter, any interest in sustaining her as a cast member.  It seems kind of obvious that she was created by a committee for a more lucrative licensing character. Not much had been generated as toys and products from Barney since the halcyon days in the 1920’s with Spark Plug, and an ornery Hillbilly with a shotgun and a fat, pipe-smoking wife were always unlikely kid favorites. So, BBB was created. Unfortunately, nothing much came of her at all.

Your Archivist has a doll of hers (got a problem with that, fella?) that looks great, probably made by the Gund Company, who did a lot of King Features licensing, including hand puppets of the newly redesigned Barney & Snuffy for this series.  I can’t seem to find any record of the doll being made, not even an internet image, so maybe it’s a prototype. Fortunately, it’s not a talking doll. 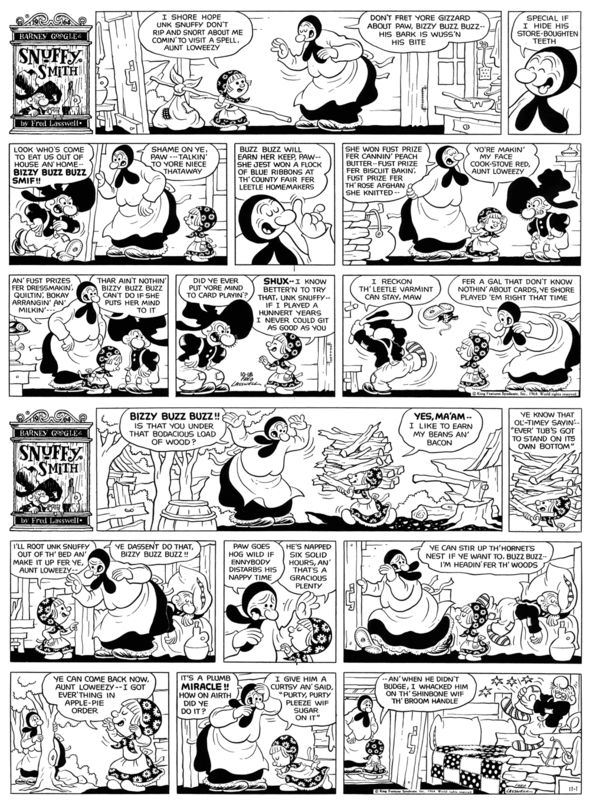 18 OCTOBER AND 1 NOVEMBER 1964, THE FIRST AND THIRD (LAST) APPEARANCE OF BIZZY  IN THE STRIP. THE DOLL HAS HER WEARING THIS PATTERN, UNLIKE THE CARTOONS.

We might have run into copyright infringement. At the time, there was a toy already on the market called “Bizzy Buzz Buzz,” which was a large red plastic, top-hatted insect with a pen instead of a stinger. You held the pen to paper, and the nib of the pen/stinger spun around in a small circle. We were easy to amuse in those days.

The next time there was an addition to the Smith kinfolk was in 1967 when, beating the odds, Loweezy finally had a son. “Tater” was born just before Thanksgiving. Usually, or usually in the preceding years, the birth of a cartoon couple’s kid was an opportunity for some publicity in client papers. Back in 1933, when a crate with a baby was delivered to Popeye’s doorstep, a question was posed to readers to send in suggestions for a name for the little stranger. The name “Swee’Pea” won. (Popeye creator Elzie Segar originally wanted to call him “Schooner.”) In 1941, Blondie Bumstead had a baby that generated a well-organized campaign to build reader interest in naming the baby with contests and prizes. (The Baby who I refer to is Cookie.)

This time though, there was no build up, it just happened without syndicate fanfare (or none that I can find).  A strip pretending to be reader suggestions for a name are nothing more than gags. Lasswell obviously had “Tater” in mind all along. I wonder if that’s a nickname and his full name is “Potato”?  Now the baby is nearly fifty and hasn’t learned to walk yet. I guess they have something in the water down in Hootin’ Holler. 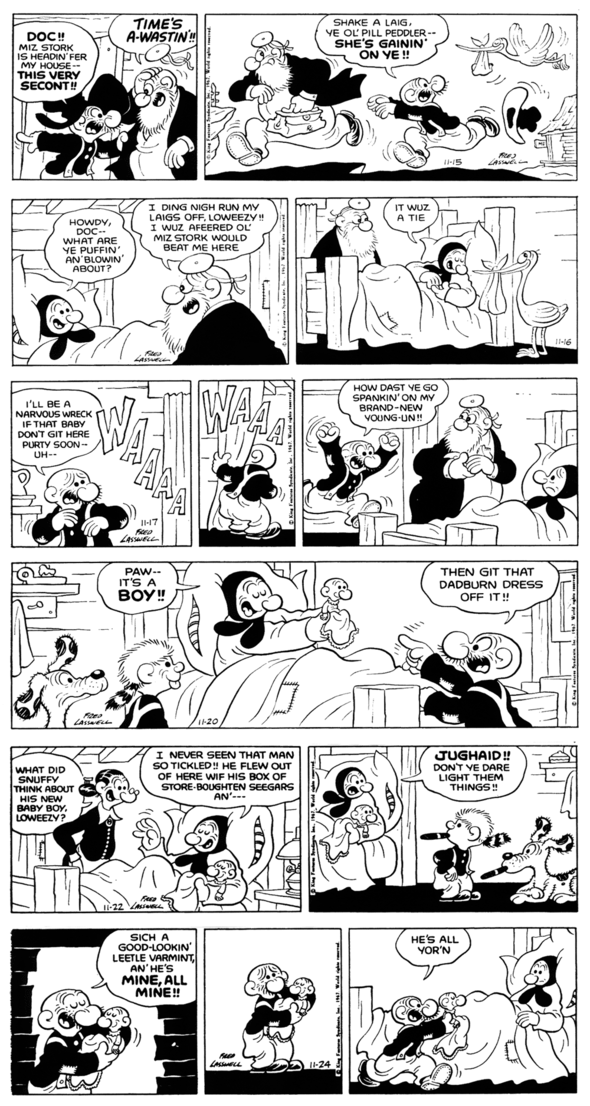 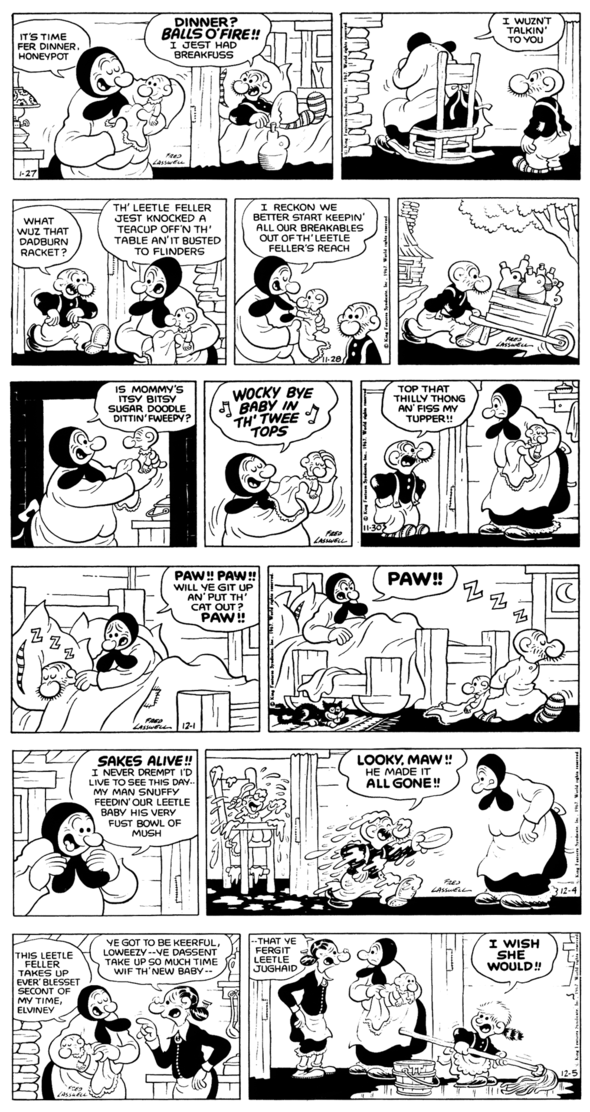 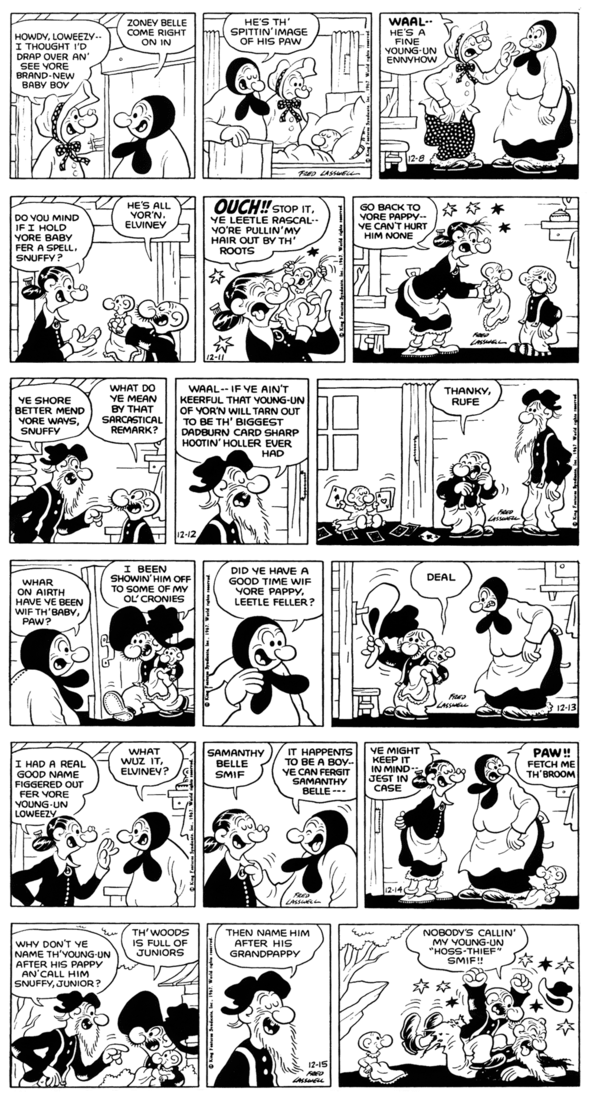 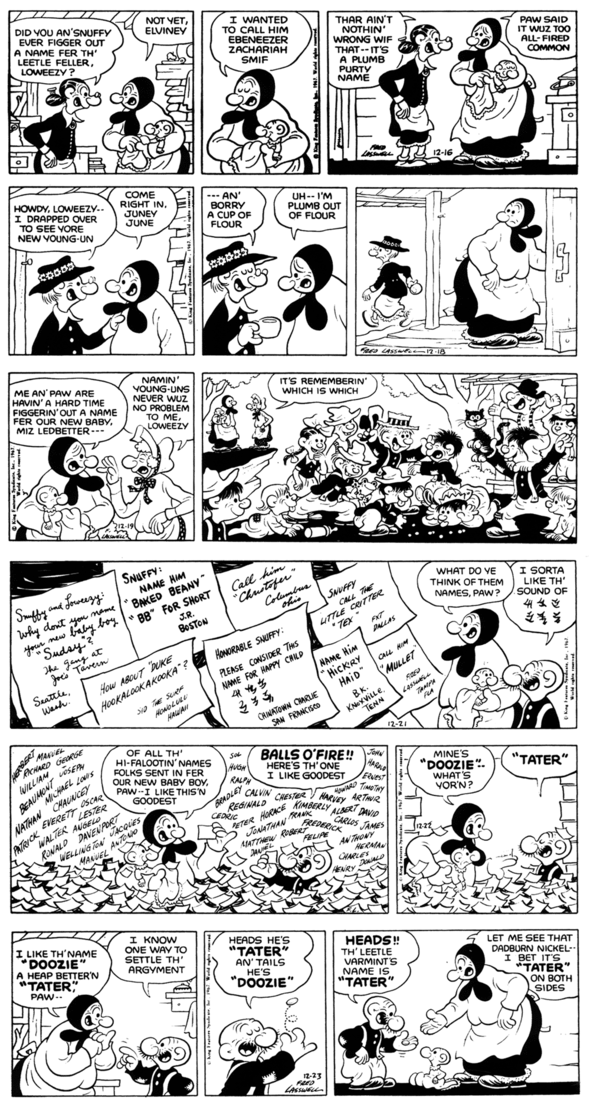 SCENES FROM THE BIRTH OF TATER SMITH NOVEMBER-DECEMBER 1967.