AN INTERVIEW WITH JULES RIVERA 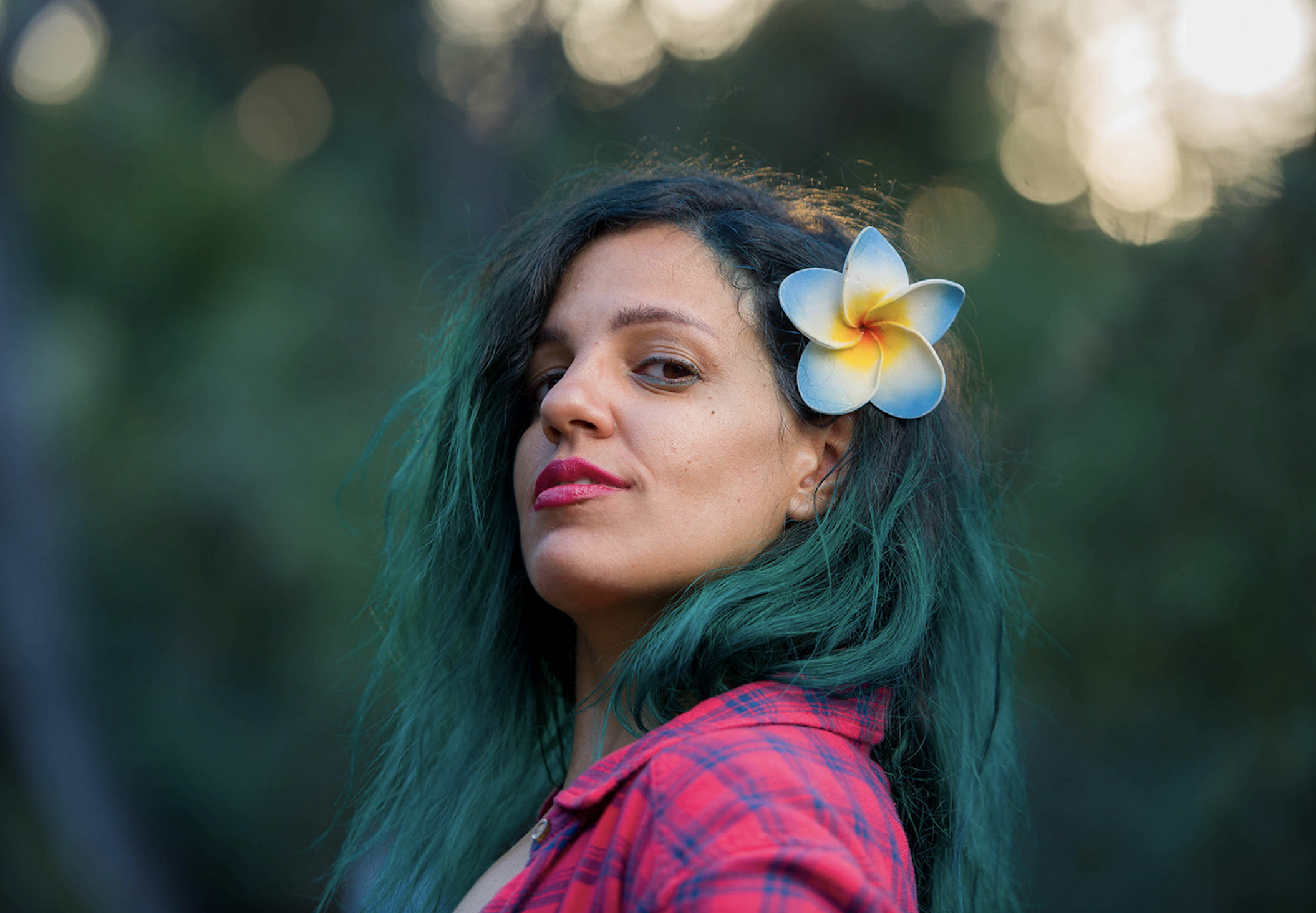 This Monday, October 12, Mark Trail will get a complete makeover by a new and talented artist: Jules Rivera. The LA-based cartoonist and illustrator has been hard at work these past few months to bring this new modern take on the character to life. But who exactly is the person behind the pen? Well, we can tell you she’s about 50% surfer, 50% gardener, and 110% strong and unapologetic feminist. Oh and there’s probably some percentage of tireless artist in-between all that.
As we welcome Jules to the Comics Kingdom family, we got a chance to sit down together to find out more about her as an artist and as a person. Continue reading below for our exclusive interview. Trust us, she’s a really cool gal!
-To start off, tell us a bit about yourself and what got you into the world of art and comics.
“I’ve had an interest in cartoons and animation since I was very young. When I was a kid, the most compelling cartoons on Saturday morning were X-Men and The Tick. I loved how grown up dynamic those shows were. When I hit adolescence, the anime craze hit the United States and I fell into the Sailor Moon trap with most teenage girls my age at the time. Anime led to manga and manga led to webcomics. Once I had discovered I could tell my own visual stories by making comics and graphic novels, I was hooked. I started making my own webcomics in the early 2000’s and have been on that journey ever since.”
-What are some of the works you’re proudest of?
“I feel like I’ve made the greatest mark on the world with my comic, Love, Joolz. I’m obviously proud of that. I’m also extremely proud of the graphic novel I just put out this summer, Spectre Deep 6  It’s a graphic novel about a team of ghost agents who are literally ghosts. They’re trying to save the world from dangerous technology, but also trying to sort their unfinished business from their lives. It was a great book and I worked really hard on it. I’m honestly annoyed the market is sleeping on it. More people need to know how great this book is.”
-So I see you’re big fan of surfing. How many boards do you own and what’s the biggest wave you’ve ever ridden?
“I presently own two boards to ride and one for show. A longboard and a shortboard. Usually the bigger waves I catch are about 6 feet tall, but I’m still not a great surfer. I keep to the shorter waves until I feel more comfortable taking on the bigger ones.”
-Got any interesting surfing stories to share? Something funny or scary ever happen to you on a board?
“Many of the Love, Joolz comics are actually surf stories and tips I had to take ten to paper right after a guy told me to paddle away from where he was surfing because I had gotten in his way. Then a giant wave ate him, as he almost blocked another surfer riding it. It was instant karma. It was amazing. I also based my Pop-eye 90th Anniversary on a surfing experience where I landed in a bunch of sea weed.”
-Out of all the cities you’ve lived in, what made you settle for LA?

“I love LA. It’s the perfect synthesis of big city life like New York, but with the tropical weather of Florida. Also, LA has all kinds of possibilities for an artist like me. Then I started surfing and skating, and that solidified my relationship with this city. I love California in general for its dramatic landscapes and huge skies. There’s so much to love here.”

-So now you’re the new Mark Trail cartoonist. Congrats on that! How did you come across this opportunity and what attracted you the most about it? Were you familiar with the comic strip beforehand?
“I was contacted by editors who follow my comic on social media. Once I learned about Mark Trail, I saw there was a huge opportunity in this for me and my skill sets: art, science, and drawing dudes punch each other in the face. I knew I was the right artist for this job. Nobody in comics is punchier, more action-oriented or more hellbent on saving the world with sideways knowledge than me. I might not have known about Mark Trail before I heard about the opportunity, but I’m a very quick study. Also, I lived 17 years in Florida. Are we gonna act like Mark Trail isn’t Florida Man? Because, yes he is.”
-Your art for the strip captures the spirit of the classic Mark Trail comics quite well while also adding that colorful flair that most modern cartoons and comics have. Do you have any signature quirk or easter egg that you plan on implementing to this new version of the strip to make it more your own? Something that fans of yours will immediately recognize and wink back?

“Obviously, I’ve made Mark ridiculously hot, and I do have a talent for drawing hot guys. Also, I’ve drawn a few comics that had animal attacks as part of their plot lines. But my personality exudes all over this piece. Character facial expressions, intensity, things exploding, guys getting decked. This is gonna be another Joolz joint for sure.”

-Speaking of your art, I checked out your portfolio while doing research for this interview and you have quite a lot of range! I’m talking from colorful and quirky ‘Scott Pilgrim’-like art to more business professional WikiHow-looking designs. What’s your secret to getting good at all sorts of styles?
“I get bored easily. Working in multiple styles allows me to start fresh with each project. Novelty always fuels my passion, so I’m able to dive into new things pretty quickly. Bouncing from project to project keeps me on my toes. Stagnation is my foe.”
-How do you get your inspiration for the story arcs in Mark Trail?
“I wander around the internet and trip over facts until I find something interesting. Coming up with new storylines isn’t even that hard. Most of the time they come to me.”
-Is there a certain amount of research you do for the animals and environments that you write about in the strip or do you simply write what you know? Maybe a bit of both?
“I know a lot of really weird facts about animals just because I’m a weird facts connoisseur (a net result of living in Florida). But surface knowledge often leads to research. I know some things, but I often have to do research to backfill what I don’t know in order to fill out the science parts of the strip. I love learning about animals and science so it works great for me.”
-As the new mastermind behind the strip, how do you tackle these characters that have been around for decades? How do you balance writing for old and newer fans alike?
“The key is to understand the underlying essence of what makes these characters great. I learned that Mark Trail started about Mark, as a World War II vet, being rescued by a St. Bernard. Isn’t that the sweetest? Mark is a man who loves animals and nature so much he’s willing to throw down to protect them and honestly that’s hot. That hotness manifested in his redesign. To modernize Mark, I got more into his head. I show him being vulnerable in ways he hasn’t before. Sure, he tries his best to keep up that strong, manly front, but I want readers to see there’s more going on behind the Nature Dad persona. His sternness makes him classic, but his vulnerability makes him relatable. Mark has always had charm. I’m just adding a little more depth.
Cherry and Rusty are more blank slates, so I had a lot more freedom in developing their characters. My goal with Cherry and Rusty is to update them while respecting their histories. Cherry has always been supportive of Mark (and even gotten into a few animal-related follies of her own), so I wanted to develop her in a way that would compliment Mark. Cherry has to be the kind of woman who would be totally down to marry a dude as chaotic and bizarre as Mark for their chemistry to work. Cherry’s a country gal who helped her single dad work a veterinary business. She’s not afraid to get her hands dirty with animals or plants. 2020 Cherry is going to be a gardener and that’s gonna get interesting. Do you have any idea how much theft and criminality is involved with gardening?
Rusty is going to be an actual 12 year old, dealing with kid issues outside of his parents (especially since he’s the age where he’s starting to rely on his parents less). He and Andy will be best friends who go on all the ill-advised adventures you can expect a 12 year old to get on.  Rusty continues the lineage of Mark Trail as the OG story of a guy and his dog.” 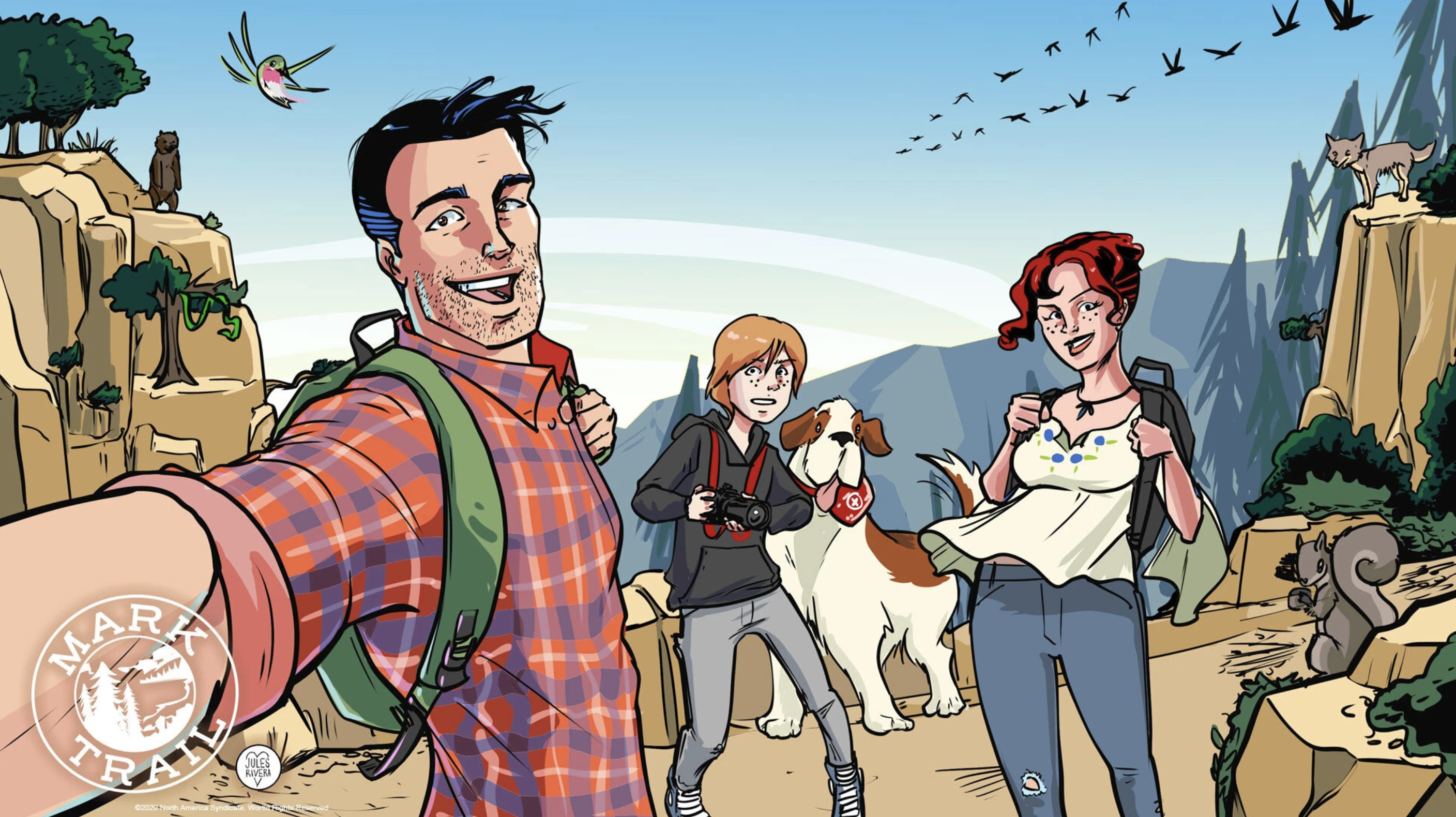 Mark’s family has never looked this good! Also, is it us or does he look a bit like actor Jon Hamm?
-Lastly, what other side projects do you have going on and what can we expect to see from you in the future?
“My webcomic, Love, Joolz updates twice a week.  I already have two graphic novel collections done of Love, Joolz for readers to check out. 200, my sci-fi graphic novel with Jennifer Brody,hits bookstands in February 2021. It’s got everything: romance, death, flowers, more flowers, no really a lot of flowers. I took it as destiny when I got offered the opportunity to jump on Mark Trail after drawing all those flowers. Check me out. I do a lot of stuff.”
Click here to check out Jules’ website, and don’t forget to check out the all-new Mark Trail from Jules herself this upcoming Monday, October 12 right here on Comics Kingdom!