Reveille – A Family Legacy in Comics 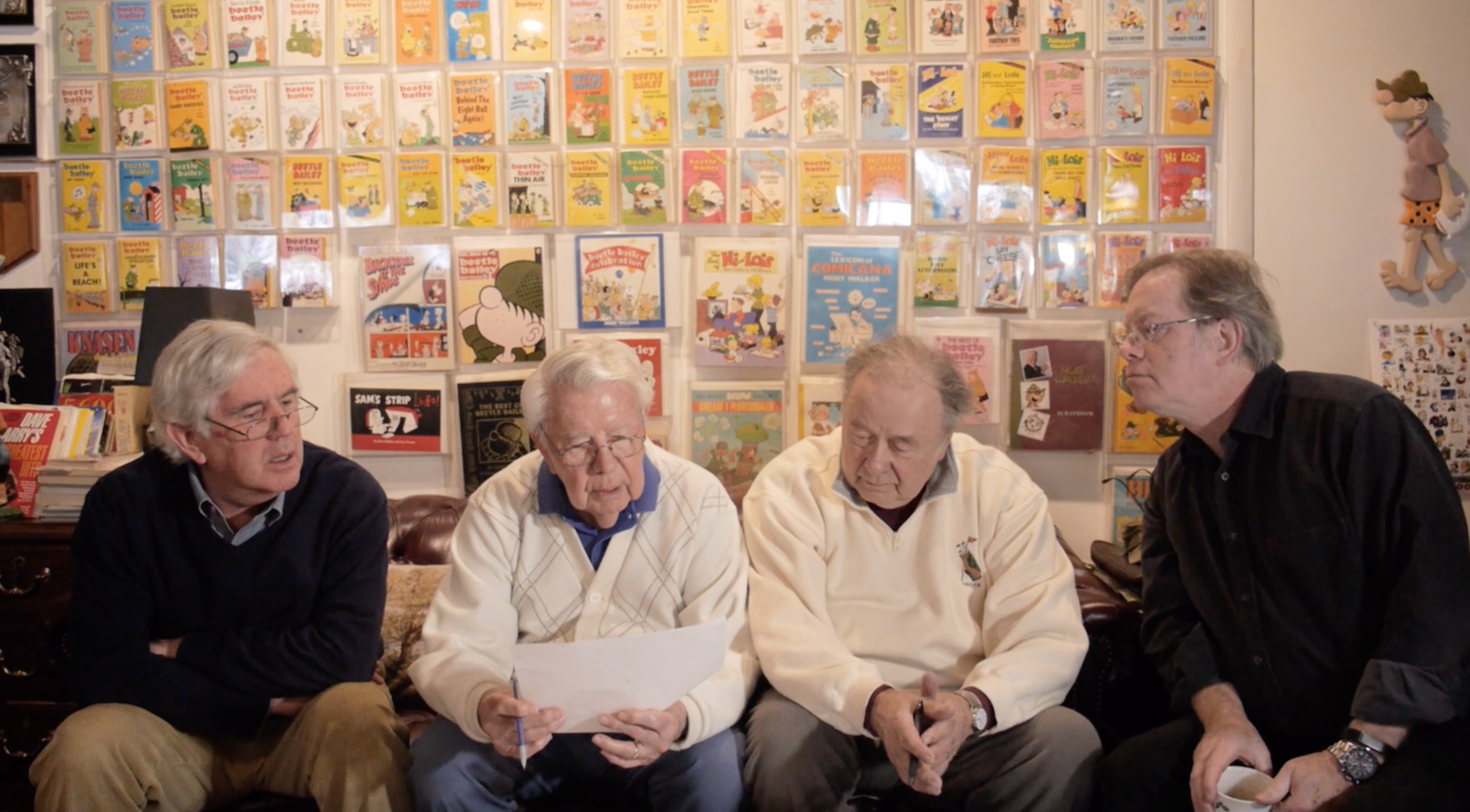 In 2014, my son David, who was an aspiring filmmaker at the time, had an idea. He asked me if he could come to Connecticut and document how a Beetle Bailey comic strip was produced from start to finish. He hoped that he could record a single gag going from original inspiration, through the gag conference and finally to the penciling and inking stages. I told him we could try but I couldn’t guarantee that one of my ideas would make it through all these steps. 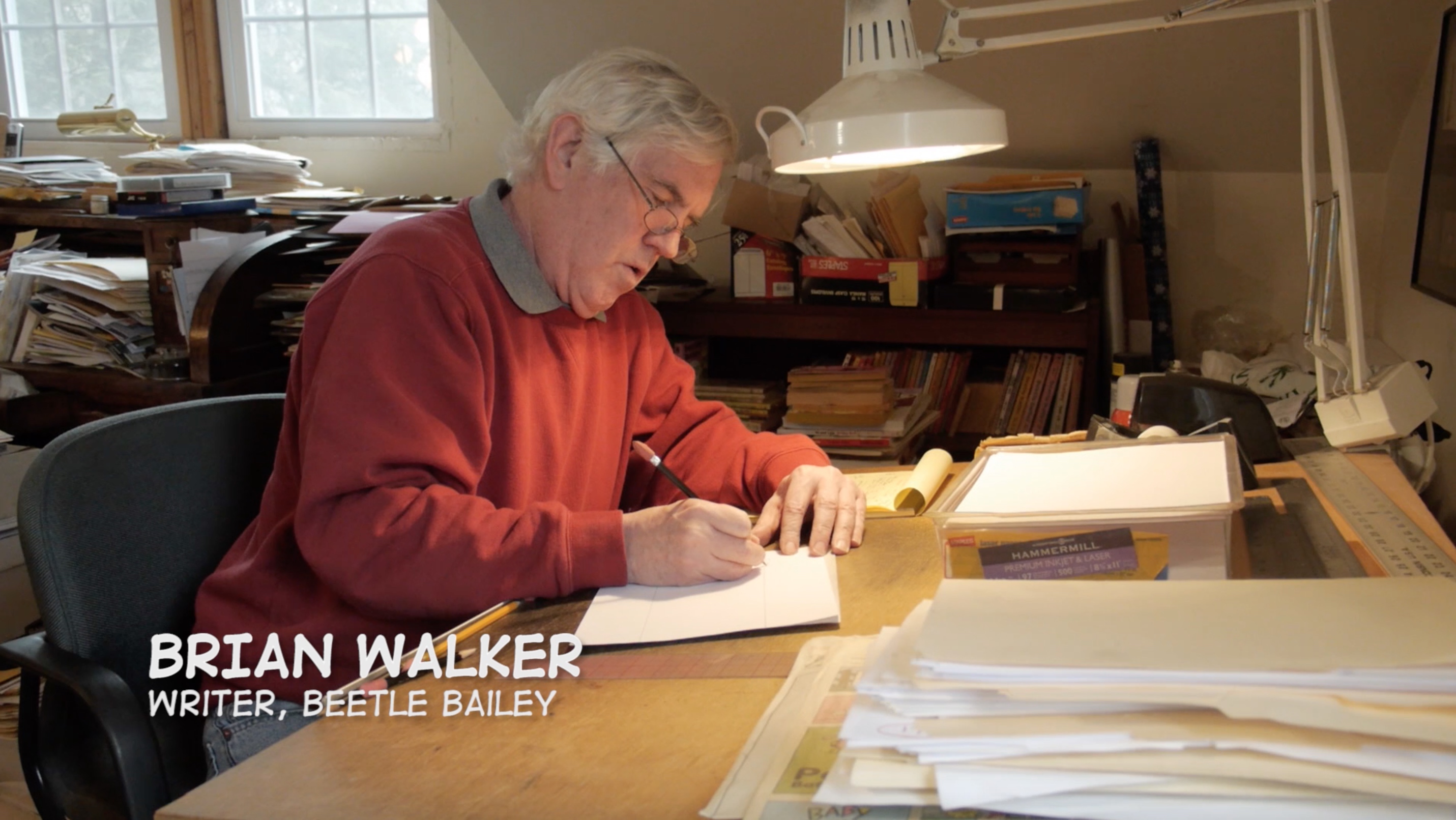 The first day he came to my studio in Silvermine to film me writing gags. I sat in my recliner chair and explained to him the creative challenges of coming up with fresh ideas. We decided he could increase the chances of getting a usable gag by recording a number of likely candidates. One of them involved Beetle and Sarge playing ping-pong.

The next day he came to my father’s studio in Stamford to shoot our monthly gag conference. In those days, these meetings were attended by Mort Walker, Jerry Dumas, my brother Greg and myself (above).  Our brainstorming sessions had never been filmed. To David’s delight, the ping-pong gag got passing grades. 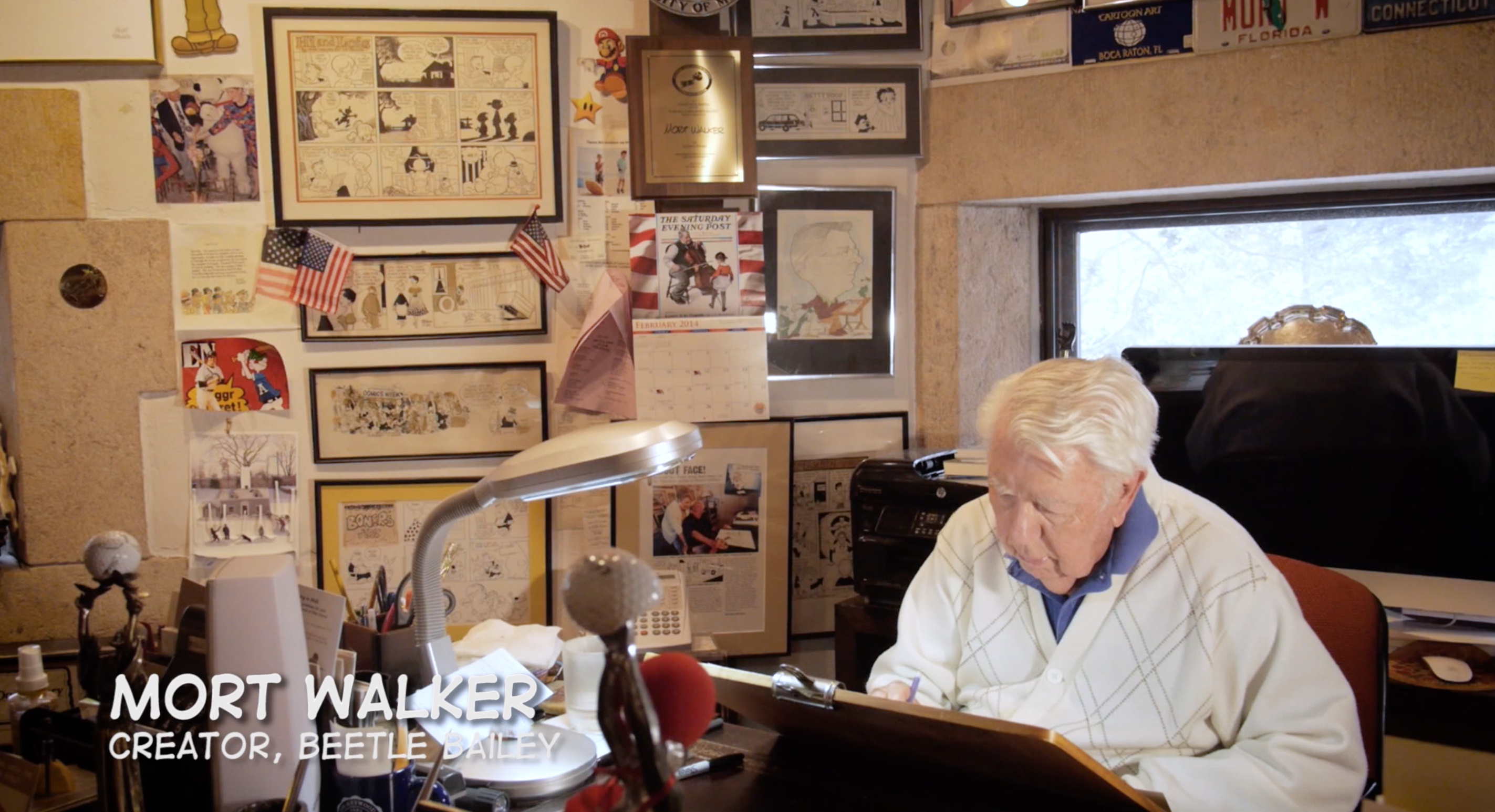 We gave the sketch to Mort and he did the finished pencil drawing before our eyes in about fifteen minutes. While David filmed, Mort talked about his childhood love of cartooning and his long career. He was ninety years old at the time. 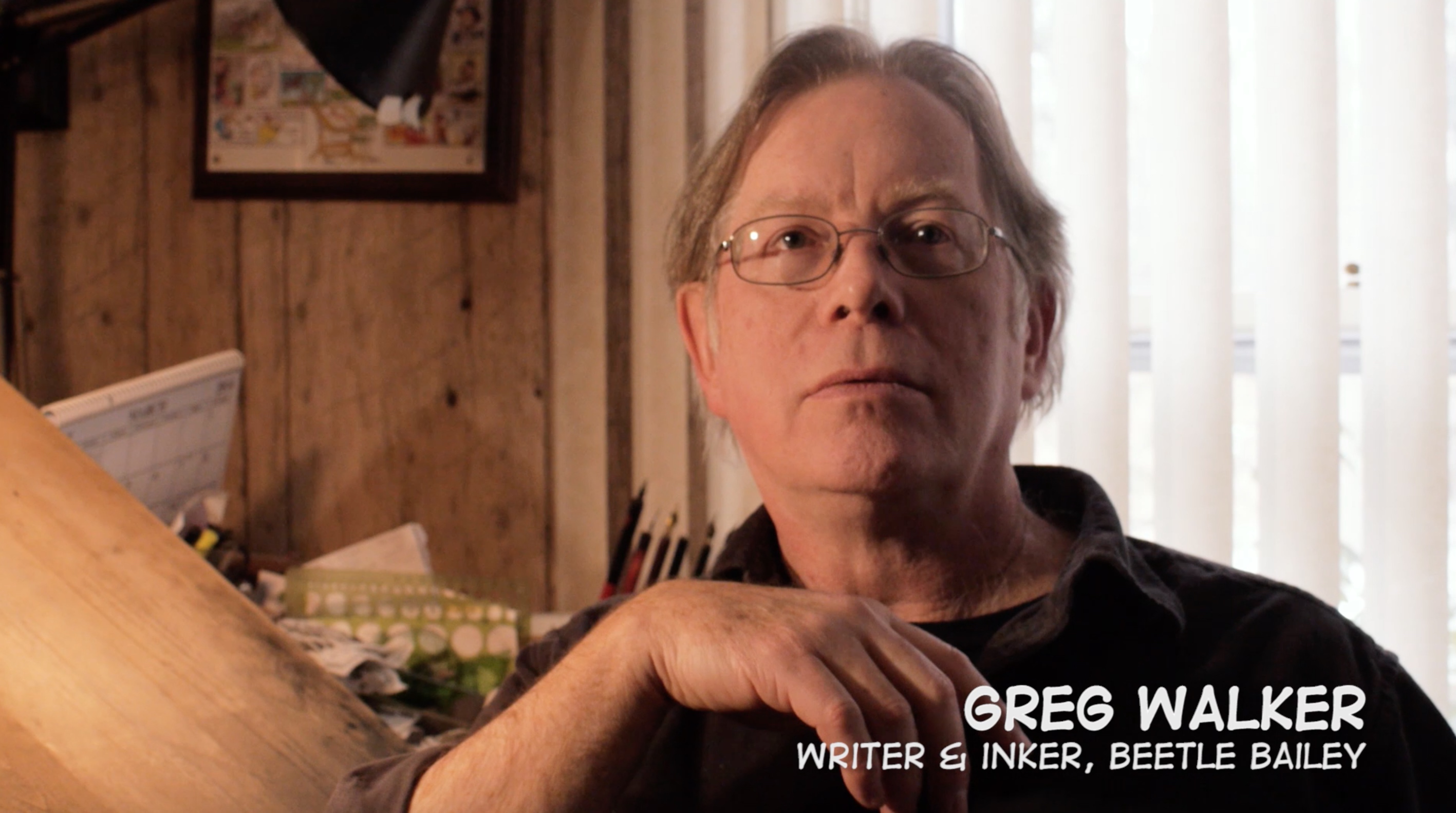 Next we took the penciled strip to Greg’s studio, a few miles away in Stamford. While Greg meticulously ruled, lettered and inked the finished product, he spoke about how he remembered the sound of a scratching pen coming from our father’s studio when he was a kid. “That’s the sound of cartooning,” Greg remarked as his pen scratched away. This turned out to be one of the highlights of the film.

David finished his documentary with a shot of the ping-pong strip printed in our local newspaper.

Soon after all this footage was taken, David was hired by John Hancock in Boston. In the last six years, he has worked as a video director, doing everything from filming the Boston Marathon, interviewing local sports celebrities like David Ortiz, Rob Gronkowski and Bill Belichick, to producing animated instructional shorts, marketing films and public service ads.

He was also slowly editing his Beetle Bailey documentary. We previewed a six-minute version at the National Cartoonists Society’s Reuben Awards Weekend in Huntington Beach, California in May 2019. The completed film, “Reveille – A Family Legacy in Comics,” premiered online in June 2020, is being shown at this year’s virtual NCS Fest on Sept. 12 and at the Crossroads Columbus Festival on October 4.

Jerry Dumas passed away in 2016 and Mort left us in 2018. David’s film preserves a piece of comics history. The strip is now produced by three Walker brothers (in photo below, left to right, Neal, me and Greg). 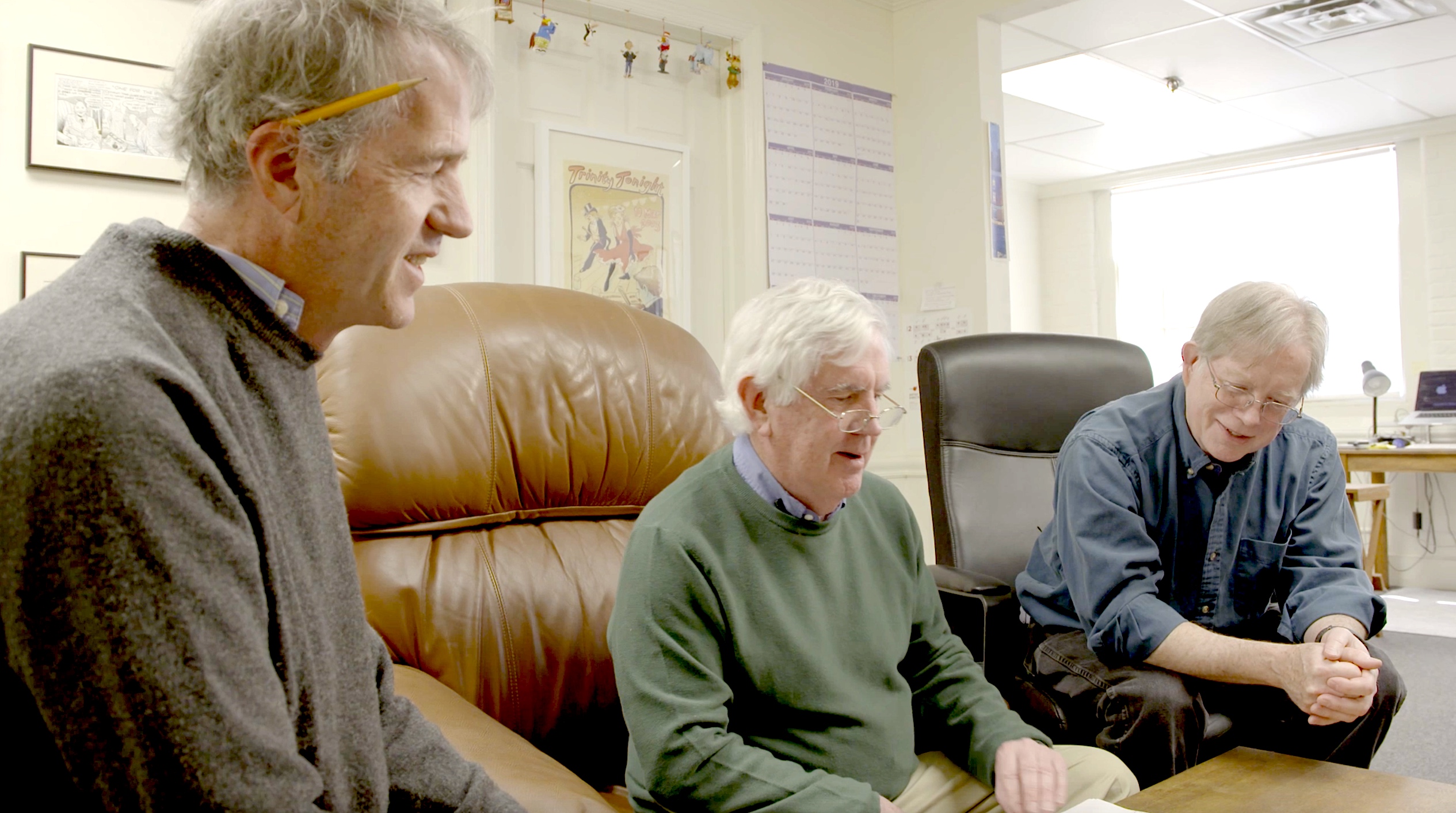