AN INTERVIEW WITH BIANCA XUNISE FROM SIX CHIX 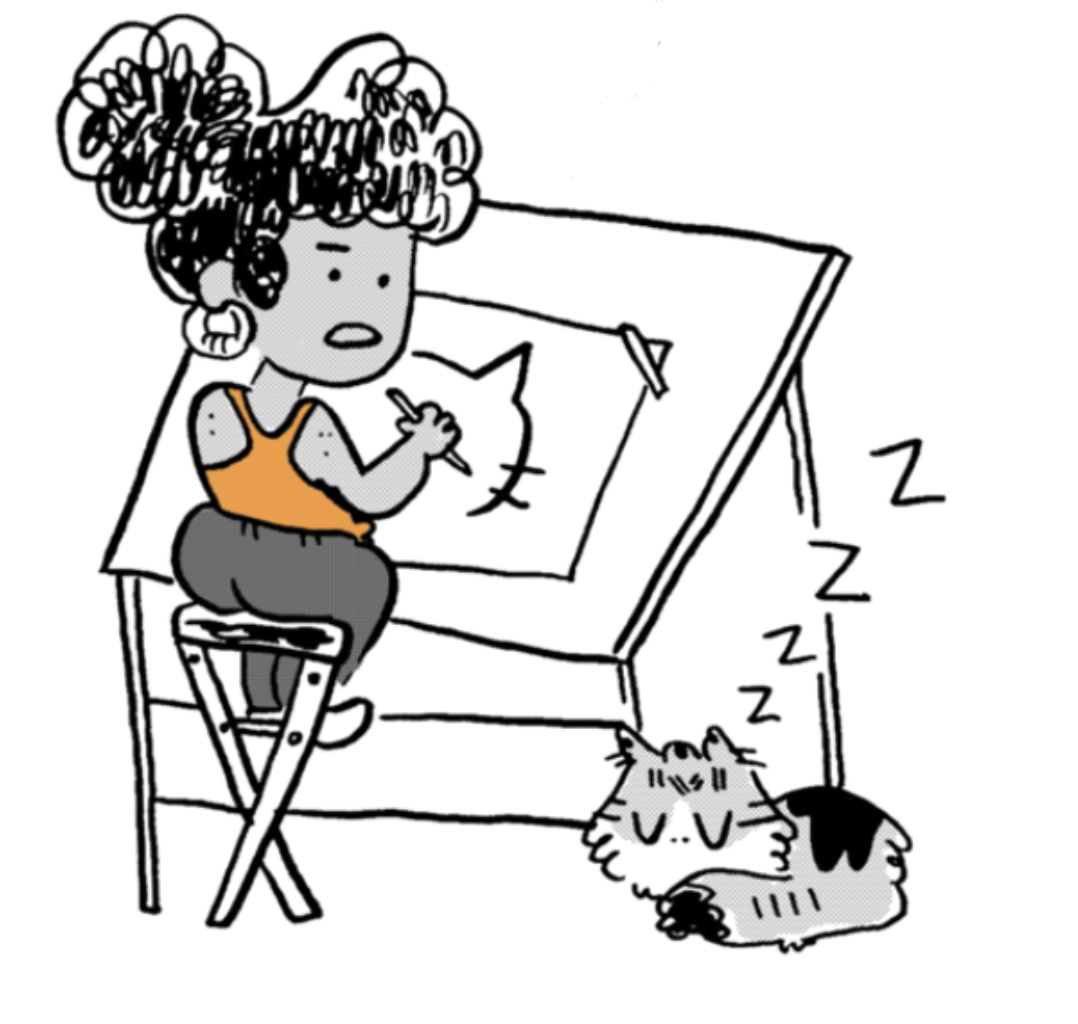 Today we sat down with Bianca Xunise, the latest addition to the Six Chix roster, for an exclusive Comics Kingdom interview! The new Tuesday chick’s work primarily focuses on the plight and daily struggles of a young black feminist weirdo in modern society. Oh that’s right, did we mention that she’s the first black member of the comic strip? With a fresh and modern voice to add to the syndicated strip, Six Chix now enjoys more variety and diversity of content than ever before!

But what did the Chicago-native and avid goth/punk-rocker had to say regarding her background and her love for music? Find out below!

-Tell us a bit about yourself; how did you get started in cartooning and what are some of your previous works you feel most proud of?

I’ve been drawing for as along as I can remember. Comics were a way that my family expressed themselves to one another. My mom had ambitions to draw for Mad Magazine before she went into fashion design, so I definitely got my dark sense of humor from her. She used to draw all our chore lists as mini comics, and every birthday or holiday card came with illustrations. It’s my love language. I love all of my work. They each represent different things, it’s hard to pick a favorite!

-What other cartoons or comic strips do you consider major influences?

My go to’s as a kid were Cathy, Where I’m Coming From, and Love is…! I like the simplicity of all of those strips and I am a minimalist in my work as well. I am also inspired by artists such as Al Hirschfeld, Saul Steinberg, and Ludwig Bemelmans. Artist who are capable of expressing a whirlwind of emotion with limited details is captivating to me. I hope to do the same in my work.

-Besides cartooning, what else are you doing to keep yourself busy during this quarantine?

I work from home 365 days out of the year, so not much has changed for my home life, it’s when I leave the house that everything feels topsy turvy. I miss my friends, so FaceTime happy hours have become essential. But I also like goofing off to my favorite playlists and dancing in my living room like it’s my very own goth club.

-From what I’ve gathered, you have a huge fascination with goth culture and punk music in general. How did you get introduced to that scene and what are some of your favorite bands or artists?

I got into goth and punk culture sort of accidentally. I wasn’t allowed to listen to pop music from my generation growing up but oldies were OK in my mom’s house. So I discovered essential bands like Depeche Mode, The Ramones, and Cyndi Lauper. I haven’t been the same since!

-Being a huge fan of that particular music scene, how would you say it influences your art direction?

I am inspired by the fashion and hair of those cultures and try to incorporate it on my characters! But most importantly I love the grass roots and political ethos of black and brown punk culture. My comics are often political, and that’s my punk expression!

-Are you familiar with the legendary CBGB in New York? Which band would you have loved to see there if it was still open?

I would’ve LOVED to see Xray Spex during their residency. (Shout out to black women in punk!) I got to see the CBGB pop up last year at The Rock N Roll Hall of Fame, it was very cool. 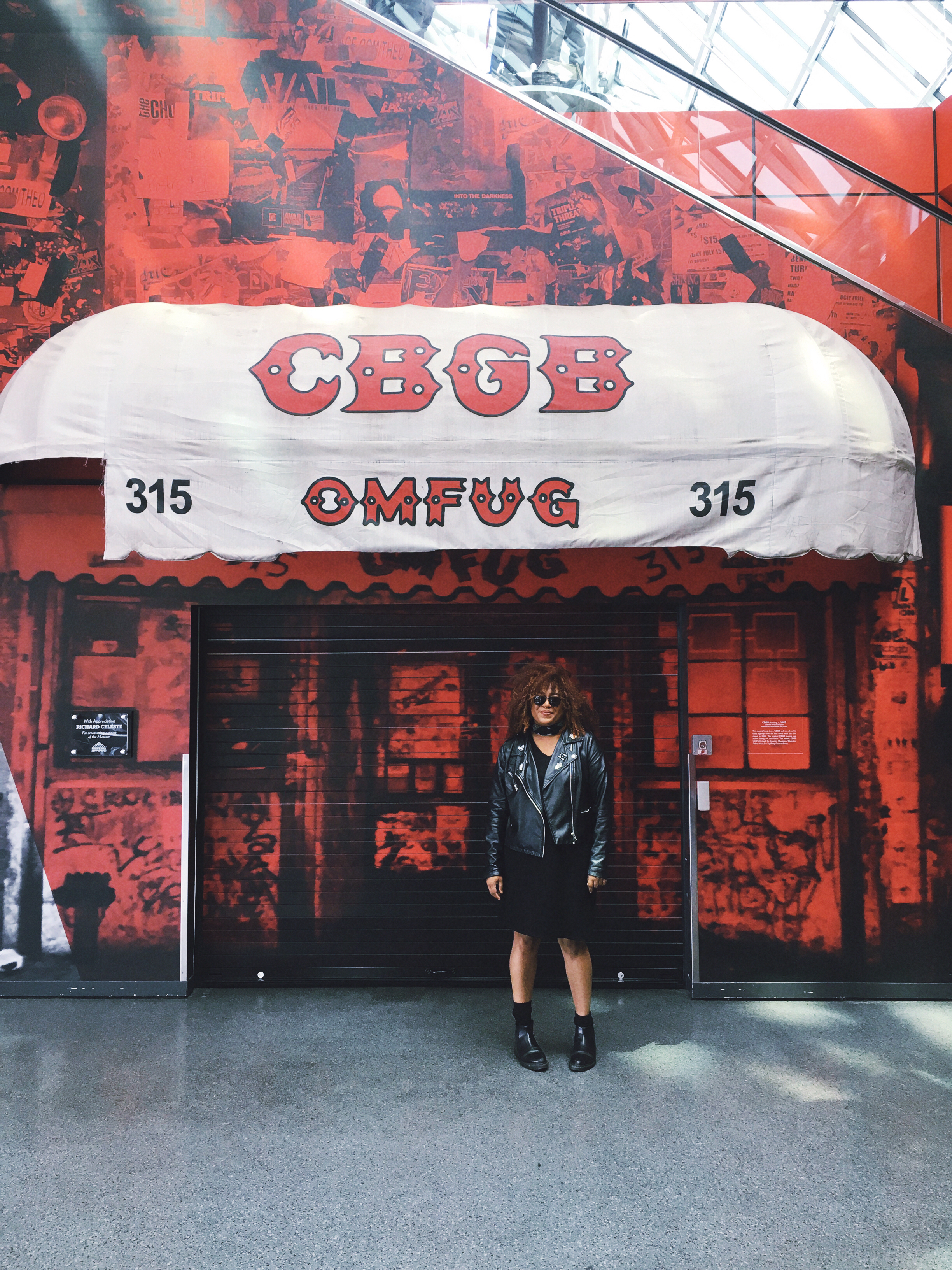 -What attracted you the most about becoming a part of the Six Chix comic strip?

The freedom to add my voice to the conversation.

-What messages do you hope to communicate to readers through Six Chix?

Don’t take yourself so seriously. My caricature of myself that often featured in my strip is a way for me to laugh at my own flaws and let things go.

-Do you face any unique challenges with this new gig?

I’m used to telling longer stories, so to challenge myself in a one panel has been fun and has forced me to grow as an artist.

-In your Six Chix comics, there seems to be a consistent character that you use to tell your stories or jokes. What can you tell us about this character? Does she have a name? Is she based on yourself or anybody in particular?

As aforementioned, she’s (they are) me! I’m a very “type A” perfectionist in real life, my cartoon self is my way of letting go control of life and learning to find the humor in it.

–You’re the second African-American woman to be nationally syndicated in comics. I know you’re a fan of Barbara Brandon-Croft and other Black cartoonists who preceded you—can you share with us some of the things you love about their work and how you think they stand out from other cartoonists?

I recently did a panel with Barbara for the Billy Ireland Cartoon Library and Museum, to hear her process with incredibly inspiring. I never knew why she only focused on heads instead of showing the women’s bodies in the cartoons she creates. But she wanted to create a cast that was free from their body and the most important thing about them was their voice. I think that’s so cool! I love her minimalism but understanding the process behind it, is even more provocative.

-Do you have any advice or words of encouragement for other people of color trying to break into the industry?

Draw for yourself, don’t chase an audience. At the end of the day you have to love your work, and audience will come to you if you put yourself out there. But don’t get hung up on likes and reshares, what’s most important is the relationship you have with your work.

Click here to check out more of Bianca’s works, and for more Six Chix, stick with us right here on Comics Kingdom!