Two comic strip anniversaries were celebrated in 2008.  Familiar characters from these long-running features made guest appearances in Beetle Bailey.

Alley Oop was distributed by the Newspaper Enterprise Association beginning in 1933. Created by V.T. Hamilin, the strip starred a caveman, Alley Oop, who lived in the prehistoric kingom of Moo. The cast included his girlfriend Ooola, his pet dinosaur Dinny, his best pal Foozy, King Guzzle ruler of Moo and Dr. Elbert Wonmug, a scientist. The storylines combined adventure, fantasy, humor and time travel. Hamlin produced the feature for four decades.

When Hamlin retired in 1971, his assistant Dave Graue took over. Graue had been assisting Hamlin since 1950 and had been doing the daily since 1966. Graue wrote and drew the strip until his tragic death in a car accident in 2001. After that, Jack Bender and his wife Carole took over.

Here are the anniversary tributes the Benders did in 2008. 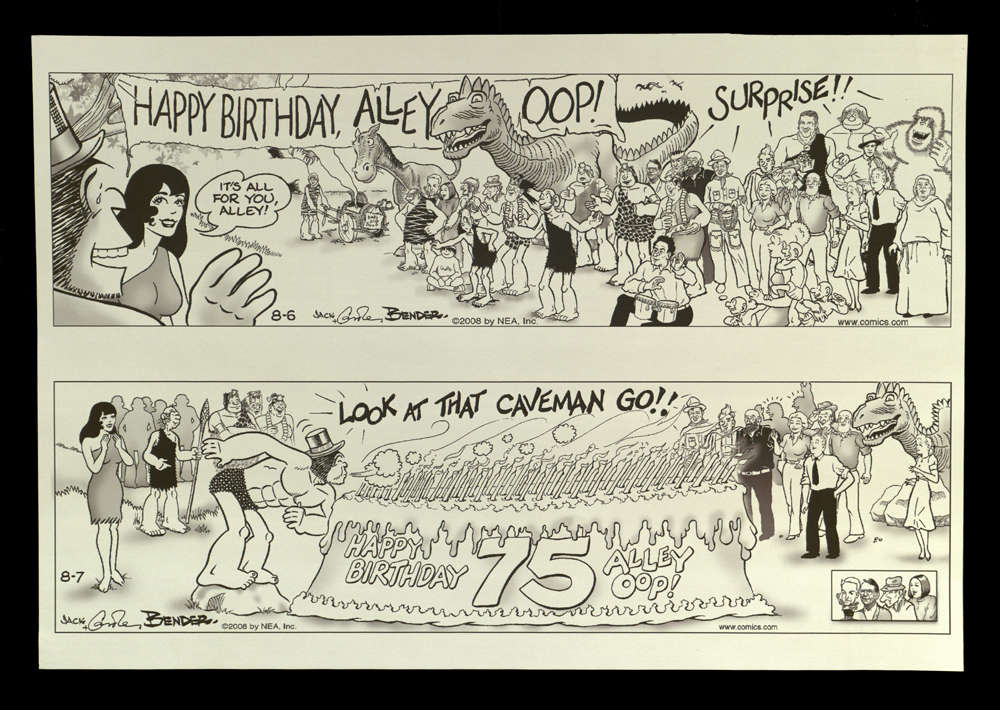 Frank King’s Gasoline Alley, one of the few comic strips in which the characters age, debuted in 1918.  Starring a group of automobile enthusiasts, the feature took off in 1921 when bachelor Walt Wallet found an abandoned baby on his doorstep.  He named the child Skeezix and the rest is history as the Wallet family continued to expand and grow.

Frank King was succeeded by two of his former assistants. Bill Perry took over the Sunday page in 1951 and Dick Moores, first hired in 1956, became the writer and artist for the daily strip beginning in 1959. When Perry retired in 1975, Moores took over the Sunday strips as well, combining the daily and Sunday stories into one story. Moores died in 1986, and since then Gasoline Alley has been written and drawn by Jim Scancarelli, a former assistant to Moores. Scancarelli continues the strip today.

Here is the anniversary Sunday page Scancarelli did in 2008.

A few of the Gasoline Alley gang also made a guest appearance in Beetle Bailey that year.

Next week the Timeline will move ahead to 2009, so be sure to check back.