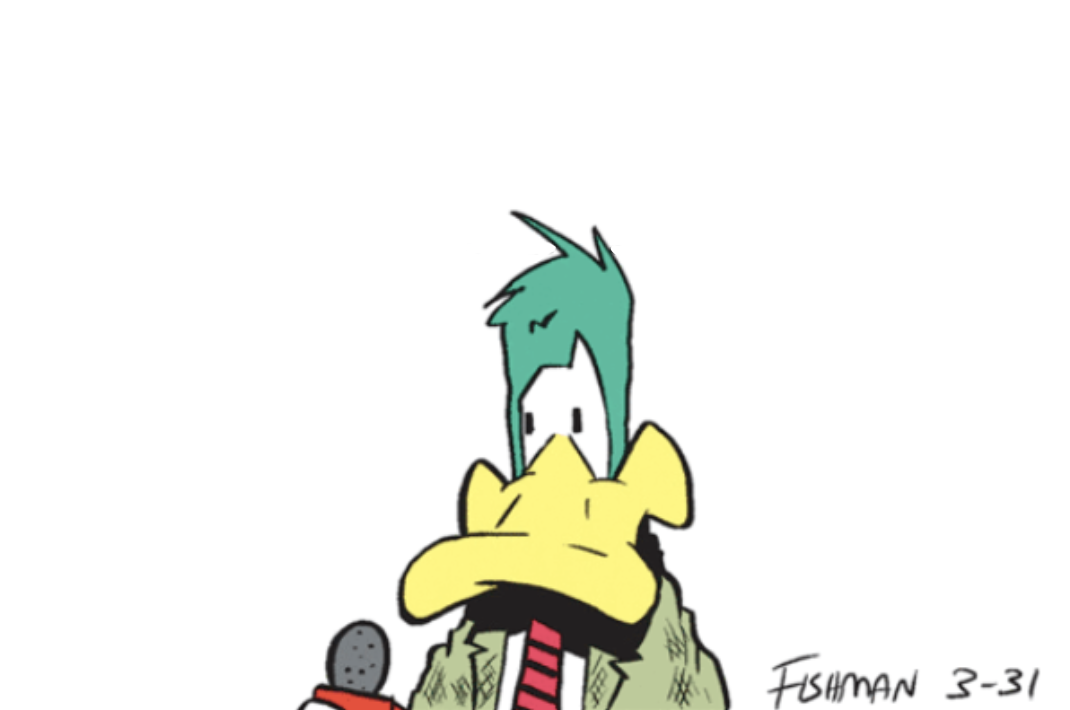 As some of you may have noticed, the popular political comic strip Mallard Fillmore has had a sudden change of art style in the past month or so, with a new signature present in place of Bruce Tinsley’s. Well, today we pull the curtain on that mystery! Meet Loren Fishman, the man in charge of filling Bruce’s shoes while he’s away. 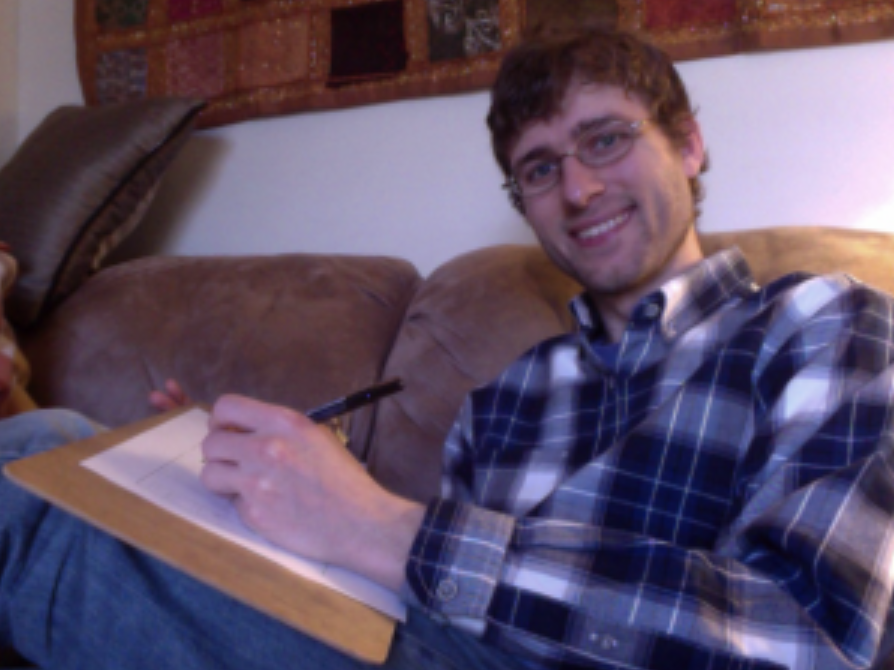 Did you know that Loren is available for commission work? Stick around ’till the end of this interview for more information!

The Minneapolis cartoonist has quite the track record and extensive portfolio that is ever growing to this day, and it shows no sign of stopping! Having recently taken up the opportunity to become the new creative mind behind the most notorious duck in Comics Kingdom, we sat down with him for a little chat to discuss this new project. He also talked about his previous works, his political values, what he brings to the table with Mallard, and whether he really likes ducks or not.

CK: Tell us a bit about yourself; what got you into cartooning and what are some of the projects you are the most proud of?

LF: I started cartooning in 2009, when I was a graduate student studying music. I loved my field but strongly disliked many aspects of academia, including the insistence on writing long-winded, jargony papers. I found myself constantly thinking: “This could easily be explained with two sentences and a picture, why must I ramble on for 20 pages?” So I think my first attempts at cartooning were escapes from what I found to be a stifling and impractical way of communicating. It was either that, or the delayed onset effects of growing up with a different Far Side Gallery in each bathroom of my house.

As my day job, I’m a classical pianist and piano teacher, and my first cartoons were pretty esoteric musings about classical music and musicians. I originally developed my cartoon panel, Humoresque, for various music and piano magazines. Once I got my feet in the water and became engrossed with cartooning in general, the panel quickly expanded into cartoons about many aspects of daily life as well as social commentary.

In addition to working on my own comics, I’ve also been in the trenches of the freelance cartooning business for several years. I’ve had the opportunity to help a ton of businesses and individuals create cartoons to add humor to their marketing materials, sales pitches, books, presentations, newsletters, gifts, and even marriage proposals.

CK: What are some of your favorite comic strips?

LF: Growing up, my comics diet was almost exclusively The Far Side, Calvin and Hobbes, and Matt Groening’s Life in Hell. Right now, I never miss Zits, Sherman’s Lagoon, F-minus, and Bizarro.

CK: What do you enjoy doing in your spare time?

LF: Wow, spare time seems like a distant and foggy concept to me. I’ve never really found time for hobbies because I’ve always tried to find a way to turn my passions into sustainable careers. But if I’m not working on cartooning or music, you’ll find me hanging out with my wife and my one-year-old son, who’s always hatching some mischievous plot.

CK: What attracted you to the opportunity to be a guest cartoonist for Mallard Fillmore?

LF: I think Mallard has a really interesting premise and a unique voice. I also think it’s a very misunderstood strip. Unfortunately, many people approach Mallard already predetermined to oppose it or even hate it on ideological grounds, and that mindset makes the humor and satire fly right over their heads.

Before signing on as the guest cartoonist, I researched the strip’s archives really extensively and poured over hundreds of Mallard comics. I came to admire Bruce Tinsley’s consistency and willingness to stand up for sincere ideas that may be unpopular or even invite outrage. That takes a lot more bravery than people realize. I also appreciate that Mallard himself is not just a party-line Republican pundit, as many would cast him; he’s an independent and logical thinker with a complex, nuanced personality. He’s also not always trying to make a political point, and is sometimes charmingly insecure and neurotic, or often just plain silly.

CK: What challenges, if any, do you face when working on the strip?

LF: The biggest challenge for me has been to keep the voice of the strip consistent. I know that Mallard is a character based very heavily on Bruce himself, so while I can do my best to get inside his head, I don’t always know exactly what Mallard is thinking the way Bruce innately would.

I’ve also had to get used to the format of the strip. My own comics are almost exclusively single-panel gag cartoons without recurring characters; so, writing cohesive storylines has been a challenge, albeit a really fun and interesting one.

CK: Do you share any similarities to Mallard? Tell us a bit about your background with conservatism. What are some issues you care about the most?

LF: I care deeply about many of the same issues that Mallard does. For example, I’m extremely troubled by the preponderance of ideology creeping its way into – and in some cases completely compromising – institutions that are meant to simply inform or educate us. So I think Mallard and I are both hyper-aware of being jerked around by the activism and political agendas of many media and academic institutions, and we have no patience for it.

An aversion to political correctness and the suppression of free speech (especially as it manifests itself on the political left in our current moment) is also something that Mallard and I share. I think most people involved in creative endeavors are very sensitive to the need for free expression, which seems to always be under attack on a lot of social and political fronts.

I also share a lot of Mallard’s seemingly minor pet peeves, like the overuse or grammatical misuse of words in journalism and pop-culture (i.e. “refute” vs. “rebut” or the abuse of apostrophe’s). Some of my favorite strips are the ones where Mallard uses his “teacher voice” to explain how to use a certain word or phrase correctly. I know these premises may seem silly, but I find them to be really important social commentary. Mallard understands that accurate language is how we articulate truth, and when people start messing with language for political or ideological reasons, the truth becomes undefinable…and then we’re all in big trouble.

CK: What current events or issues have been the most fun for you to talk about in the strip?

LF: I’ve enjoyed talking about the presidential debates and primary season. It’s nice to have an outlet for the anger and frustration that consumes me when watching our country’s political process being reduced to petty bickering and conflict-driven spectacle.

CK: Do you have any tips for aspiring cartoonists?

LF: It feels a bit strange to offer advice because I, myself, am in a perpetual state of feeling like an aspiring cartoonist. But then maybe that’s the best advice to give: keep a scrappy and aspirational mindset because that will keep you plugging away and constantly improving.

Also, I made a poster to stick on the wall right in front of my drawing desk that says: “But is it funny?” In the cartooning business, you may find yourself bogged down in the process of trying to find a niche or a gimmick to sell your work. It’s really easy to get sidetracked with thoughts like: “This idea might sell to such and such a market…” or “This might relate to people who work in an office…” I’ve found that this kind of thinking really takes the authenticity out of your voice. Just asking myself the question on that poster has helped me course-correct away from a lot of mediocre ideas and keep the joy in my work.

CK: How do you feel about ducks? Would you ever own a pet duck?

LF: I love ducks. There are a lot of ponds and wetlands around my neighborhood, and I go on walks with my family to watch the ducks and geese. I don’t think I could ever own a pet duck, though, because I have a trusty feline sidekick (like many cartoonists), and I wouldn’t really want to witness the feathery mayhem that would ensue if his jungle-predator instincts kicked in around a duck.

If you’re interested in Loren’s work, be sure to visit his website humoresquecartoons.com. Maybe he’ll draw your next marriage proposal!