From Doodle to Publication

For any newcomers to the feature, as well as longtime readers who may be wondering, perhaps and introduction is in order.

After nine years spent writing a ton of gags for Bizarro, including three years assisting Dan Piraro as the feature’s colorist, and filling in as guest cartoonist for a couple of weeks, I signed up to write and draw the Monday through Saturday Bizarro comics starting on January 1, 2018.

Bizarro‘s creator, my friend and colleague Dan Piraro, invited me to take over for him, while he continues to produce the Sunday pages from Rancho Bizarro World HQ in Mexico, where he also works on gorgeous surrealistic paintings and an upcoming graphic novel.

For my first official post on the Comics Kingdom Bizarro blog, I’d like to show you how the sausage is made here at Bizarro Studios North, in Hollywood Gardens, PA. 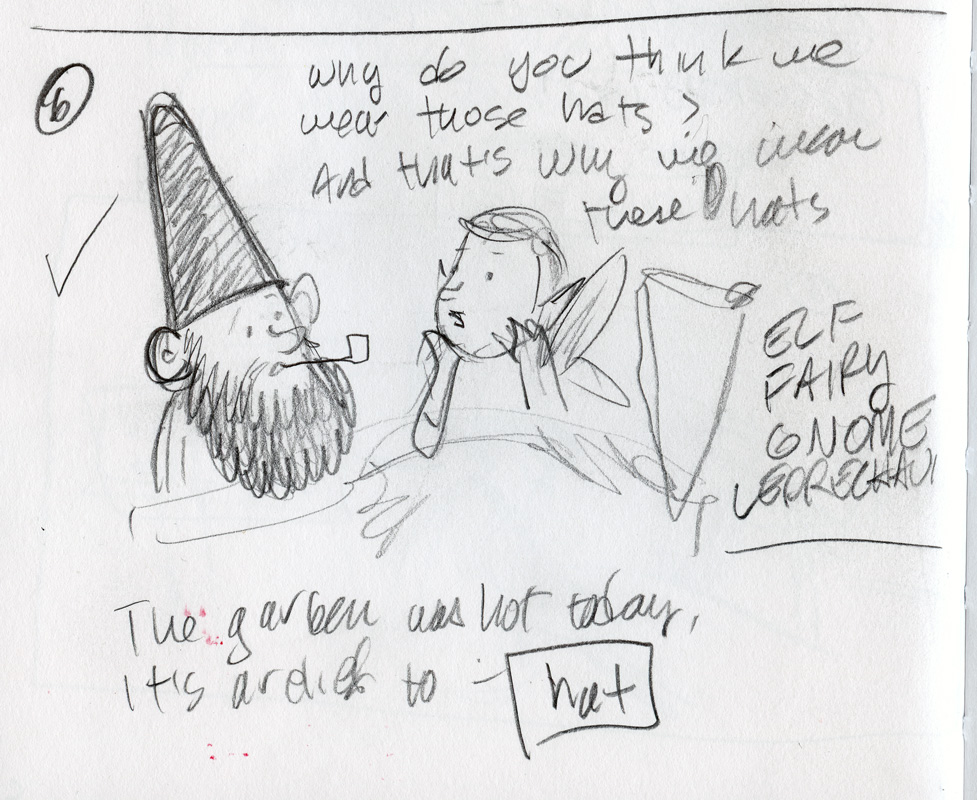 Today’s panel started as a scribble in my sketchbook. I wondered if garden gnomes might wear those tall pointy hats to cover up tall pointy heads, and decided to build a gag around that idea. 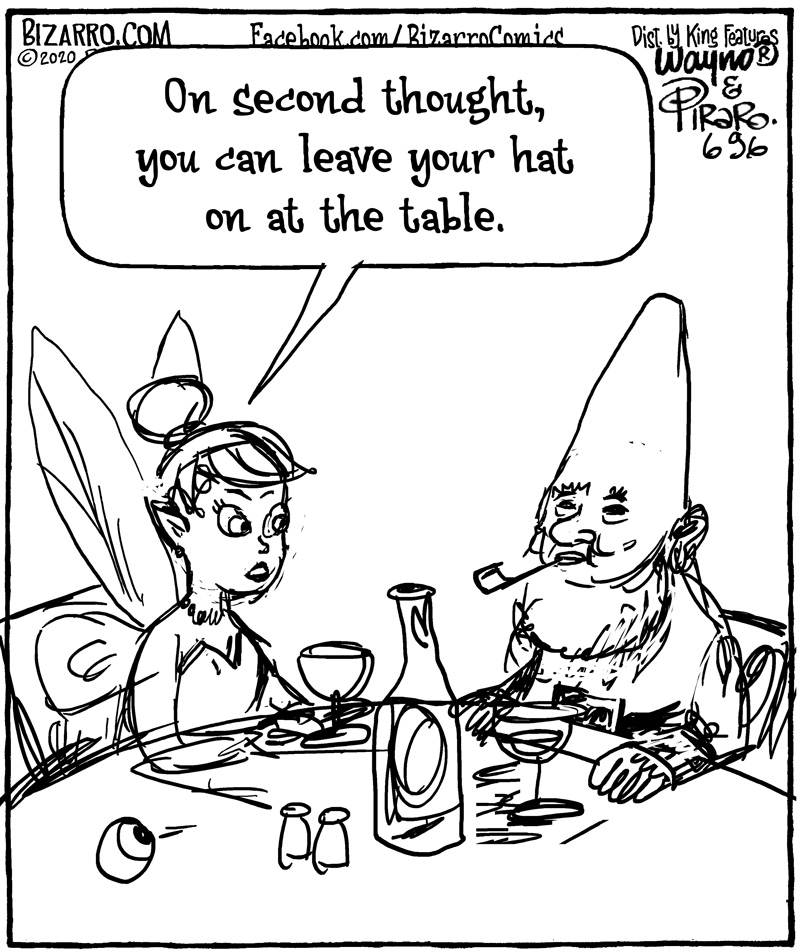 After I composed the dialog and chose a setting for the gag, I laid out the text, and did a quick digital sketch, drawing with a Wacom tablet and stylus. At this point, I adjust and move parts of the drawing to leave space for the signature and other publishing text, and to keep the frame from becoming crowded.

The notation under the signature is numbering I use to keep track of the gags and deadline schedules in a database. This cartoon was the 696th one I’ve drawn since I started working on the dailies. 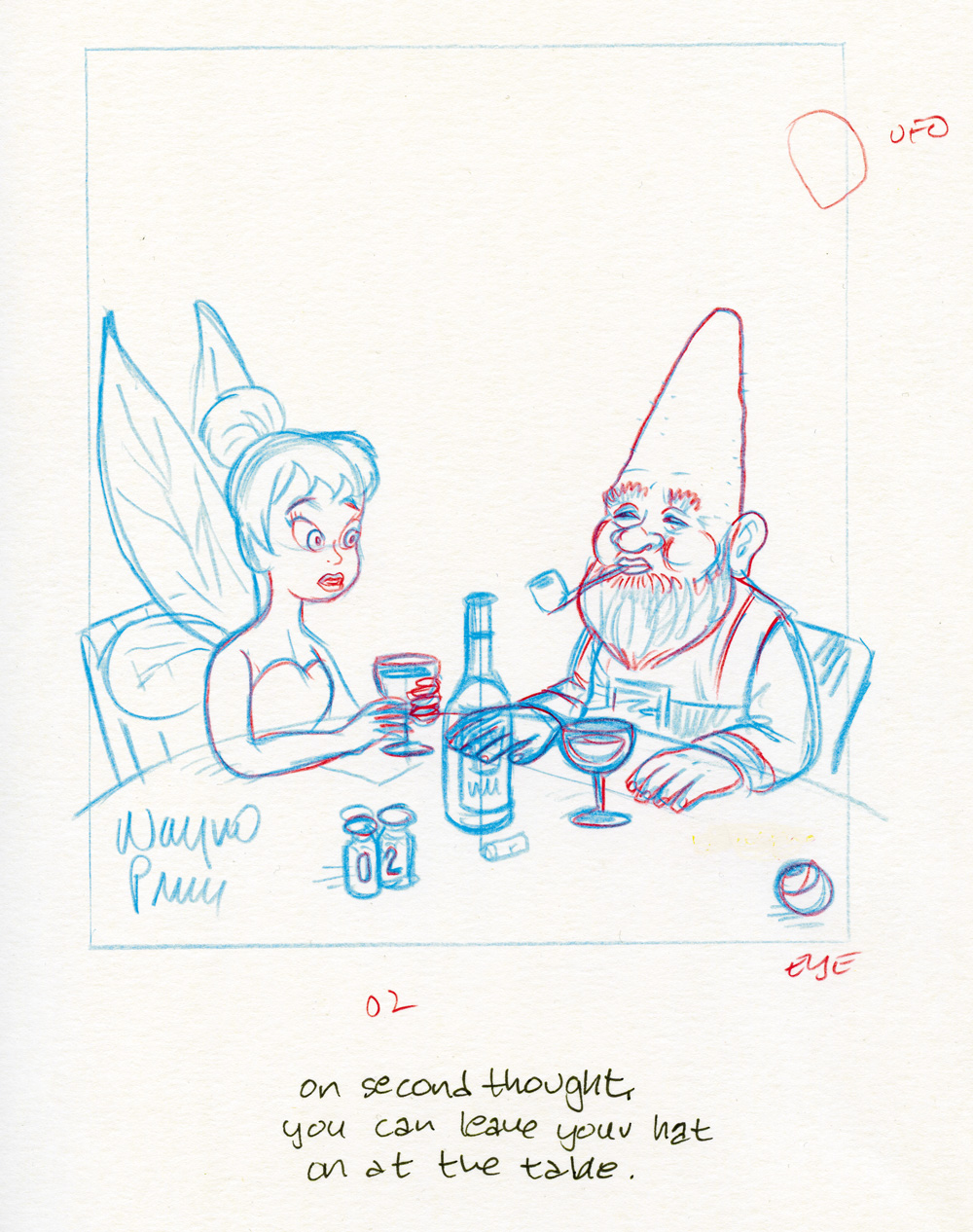 My next step is to tape a printout of the sketch onto a light box, where I lay artist’s paper over it, and draw a tight pencil version. Yes, I still make the original art with pencils, paper, and ink. I like to watch as the pile of original drawings grows.

I start with a pale blue pencil, and if I need to make any changes or refine parts of the drawing, I’ll do it with a red pencil. I also write the dialog under the drawing, and make some notes about the Secret Symbols appearing in the panel. 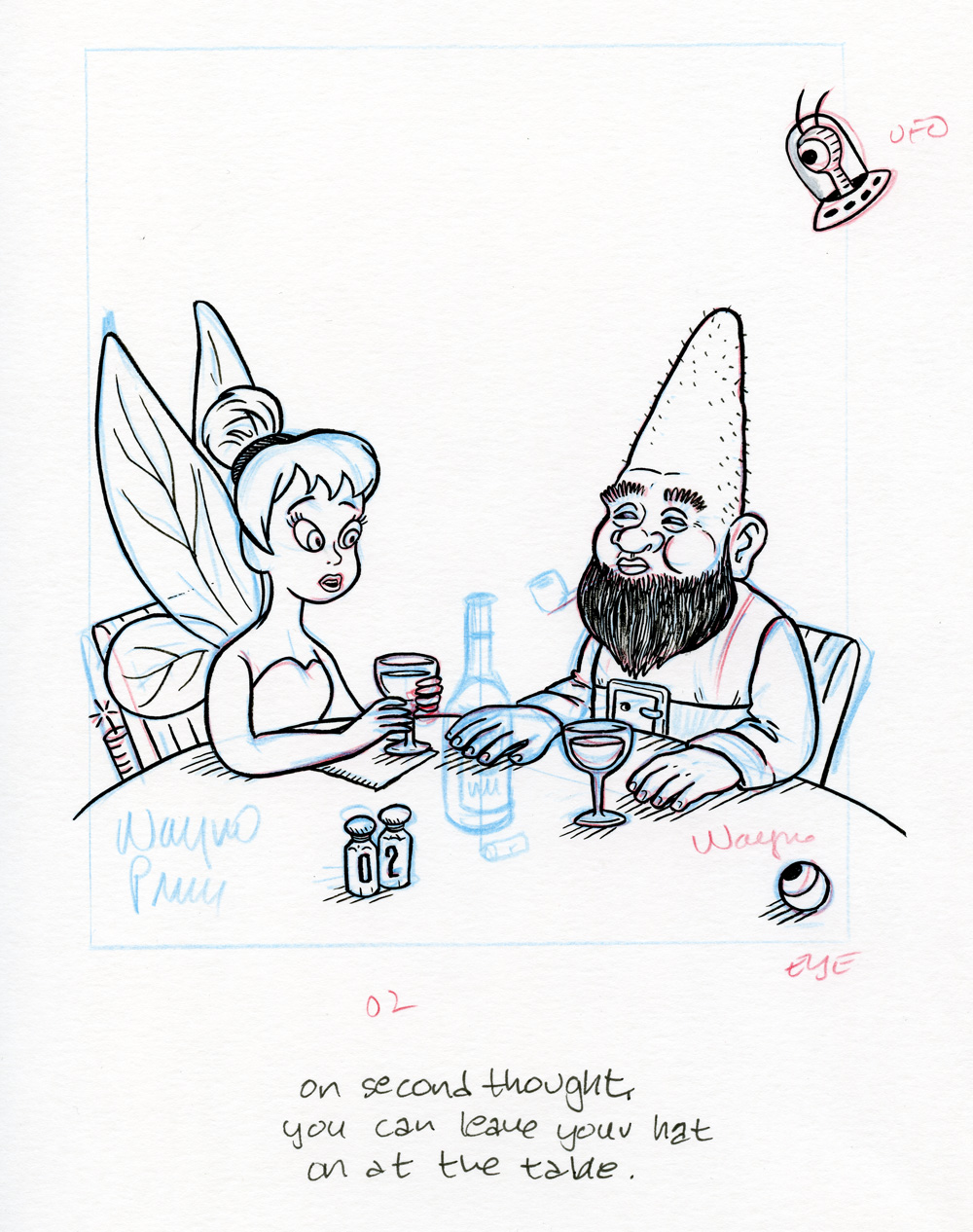 Finally, I ink over the pencil lines using India ink and a brush, plus artist’s markers for some of the finer detail.

You can see that while laying down the ink, I decided not to draw the wine bottle and pipe, to give the drawing more breathing space. Neither of these elements contributed to the gag, and they made the image busier that it needed to be.

I thought I could draw the UFO in the upper right corner without penciling it first, but I was wrong. This one is distorted, and my pen slipped, leaving some stray lines. I tried to cover it with white-out, but ended up copying the UFO from another piece of art, and putting that in the finished panel. 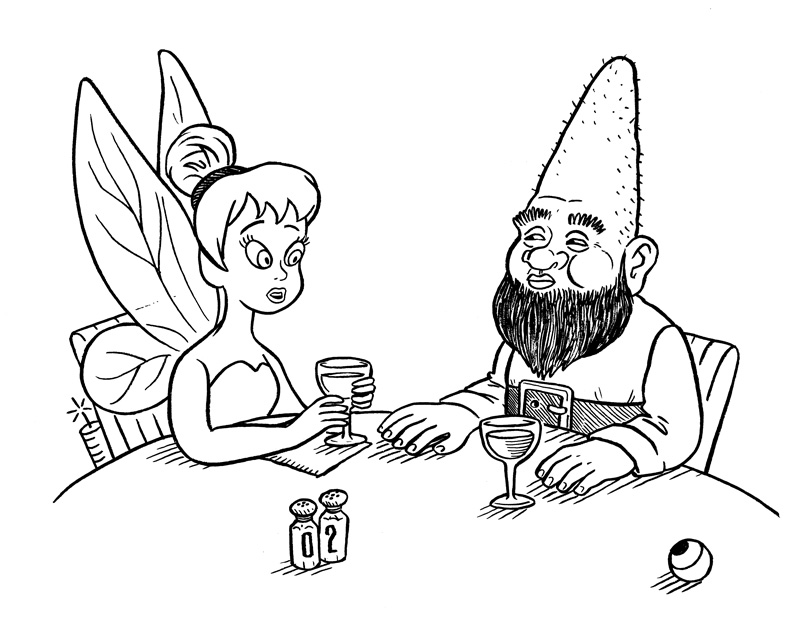 After scanning the inked original, I digitally removed the red and blue pencil lines, leaving a nice clean black & white image to put into the final layout. 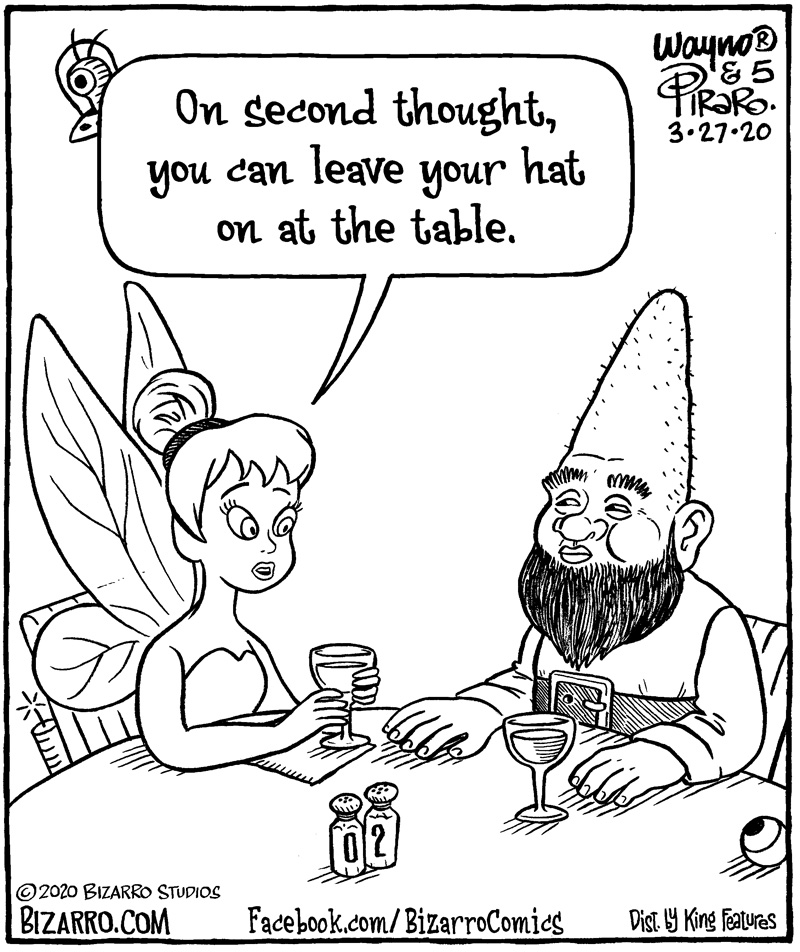 The last thing I do is count the Secret Symbols, and put the number next to the signature. Occasionally I miscount, and Dan or the hard-working editors at King Features usually catch the error, but every so often, we’ll publish a comic with an incorrect SSC (Secret Symbol Count). Fortunately, our sharp-eyed readers always find these boo-boos and let us know so we can fix CK’s archived version.

I do a full week of black & white panels in one batch, before making color versions for the clients who publish Bizarro in color. After I’ve colored the six panels, I’m still not finished. I then create a strip version for each daily comic, since many of our client newspapers run Bizarro in a horizontal space. I do all of the strip conversions in Photoshop, which usually requires shuffling and resizing elements, and removing and/or adding small details. These are also done in full color and black & white versions.

That adds up to four separate versions for each day, or twenty-four per week. Sometimes it’s a little overwhelming to keep track of them all.

The strip configuration of today’s cartoon is shown as the header for this post. Thanks for checking out my first entry here. I hope you’re not tired of looking at all of the iterations of this gag.

I hope you are all safe and well.