It’s almost 2020, and it’s time to look back at the year! I’ve found the most-viewed comics of 2019 (since the new Comics Kingdom site launch) to share with you, so you can see what other comics fans were reading this year! 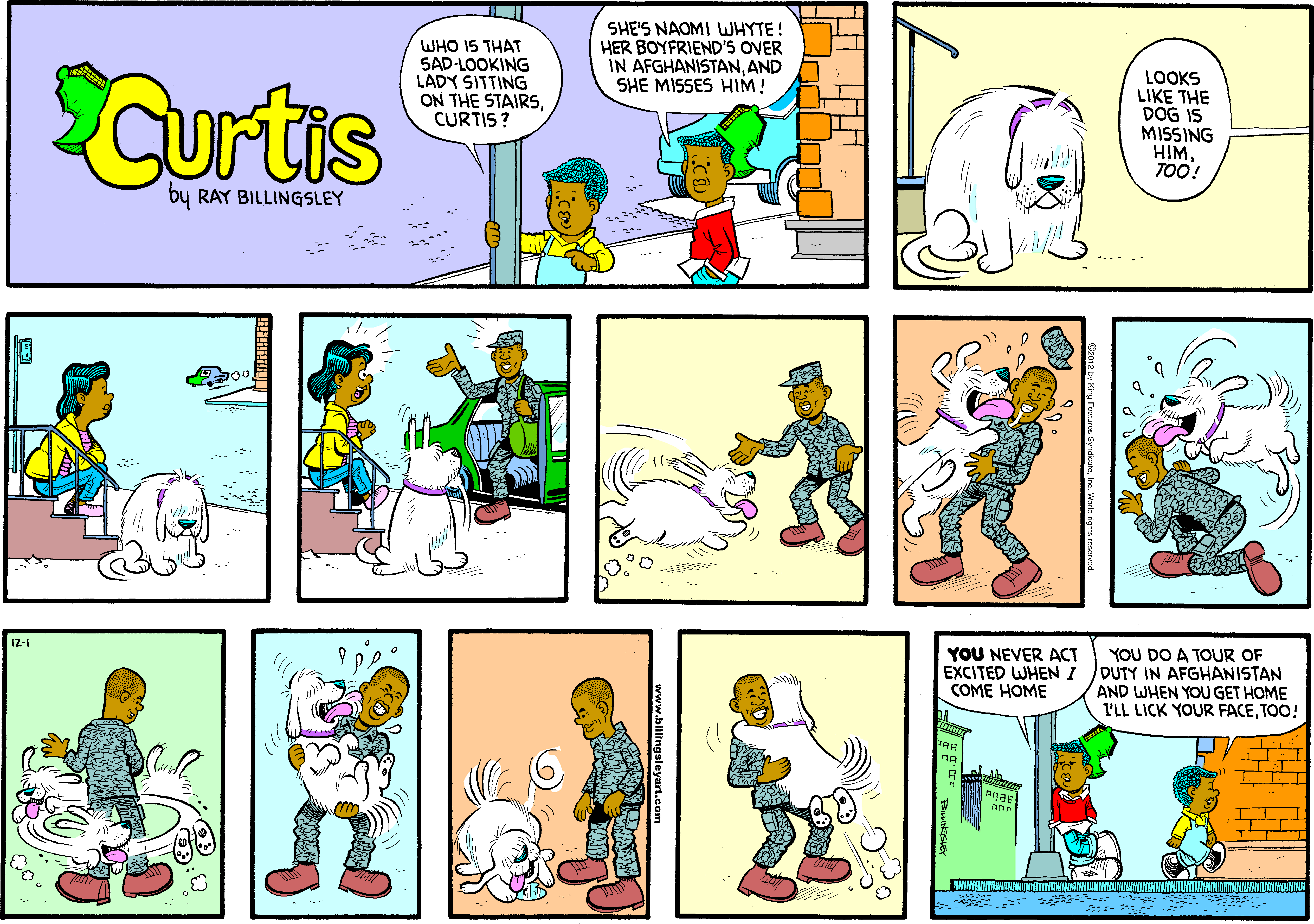 This is a reprint from 2012, but Ray Billingsley did a wonderful job of making it pretty goshdarn evergreen– as someone with family members in the military, seeing our parents, siblings, cousins, partners, and other loved ones come home safe is always a cause for celebration. That dog is all of us! (I mean, the dog is cuter than most of us, gotta say). Though I’m not sure Curtis would *want* that kind of reception from Barry… 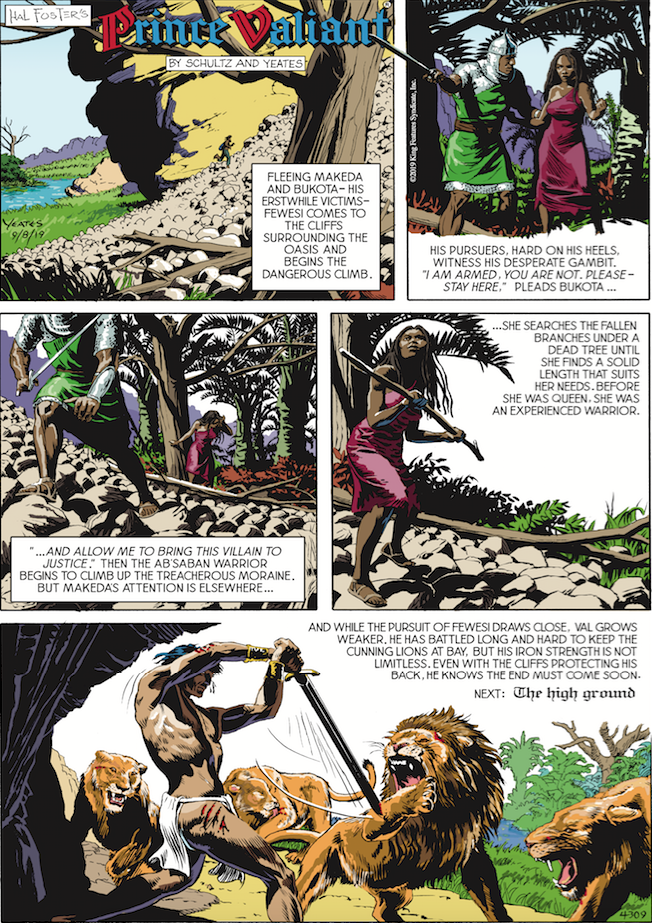 Prince Valiant continues to be an artistic masterpiece under the stewardship of Mark Schultz and Thomas Yeates, and this page shows why. Makeda is such a dynamic and beautiful character, and I love her standing there with that stick, equal to Bukota in full armor. Also, that Val battle with the lions at the end of the page is SOMETHING, isn’t it?

Sally Forth went through a time skip this year, and this is the beginning of that jump. I like to think that the time skip happened between the second and third panels, and that Hilary just slept through an entire year, something that I am pretty sure I did at least once when I was a teenager… or maybe that we know from this that Hilary hasn’t gotten any BETTER at waking up in the past year. The time skip was a lot of fun; I hope none of you are sleeping on Sally Forth because it is continually a delight. Francesco Marciuliano and Jim Keefe share a special brand of both nerd humor and attention to detail that makes it a joy.

Hawthorne is ALWAYS trying to cash in, and this time, it’s on the trend in AR gaming! I’m suprised his idea isn’t a rip off of Pokemon Go! where you catch all the chumps stupid enough to spend money on your terrible game! But seriously, AR games were a big thing this year— I know I played a bunch of them! Ernest’s idea for a socially-conscious one is pretty brilliant, if you ask me…now I want an AR game that gave you points for picking up litter or reducing your carbon footprint! And I’d get Jim Toomey to illustrate it!

This one is for all the ladies who are sick and tired of guys acting like they’re not fit to be seen in public without a full face of makeup. Darryl, maybe it’s time for YOU to learn how to apply eyeliner in 2020! Rick Kirkman and Jerry Scott make sure Darryl only thinks it, and doesn’t say it, thank goodness!

I also love Hammie’s Godzilla-looking costume in the background. Godzilla: King of the Monsters was one of my favorite movies of the past year and it’s gotten me on a kick re-watching all the old Godilla films. My favorite? Definitely anything with Mothra!

Oof, this is one of the most momentous— and heartbreaking— comic strips of the year, where we found out that Bull Bushka committed suicide in Funky Winkerbean, after his healthcare coverage for his CTE diagnosis is denied. This story caught the attention of Sports Illustrated as Tom Batiuk brought attention to the complexity and challenges of CTE affecting former football players. Tom Batiuk never shies away from tackling tough issues and reminding us that the comic medium is just as great at making us cry as it is at making us laugh.

It’s so great to see how much Cooper has grown up— I remember back when HE would have been the one getting harassed by the multilevel marketers, although he would always have been cynical about it. Now he’s the one protecting the kids on the floor. LOVE how the MLM hisses at the broom like he’s a dracula facing a crucifix! One of the things I love about Retail is that Norm Feuti has allowed the comic to grow and change with the reality of brick and mortar shopping as more and more people shop online, and his characters have grown and changed with the times, too. Retail is a great comic to follow, and if you’ve been missing it, you can read it from the beginning with a Premium subscription!

OH MY GOD this one is genuinely both laugh out loud-y and CRINGEY AS HECK. I have yet to have accidentally posted something so awful to social media— and I don’t have too many followers on Insta, but I’m sure none of them want to see butt sores. Zits is such a tremendous comic— Jerry Scott and Jim Borgman constantly outdo themselves, and I’m lucky I work in an office where if people hear me cackling, they know I’m just doing my job. I definitely reflexively checked all my social accounts after reading this one.

Okay, I’ve gotta admit I looked up the word for sarcophagus in hieroglyphics and this kid is definitely OUT of the spelling bee… I also found out that there are FOUR different words for sarcophagus in hieroglyphics so this might have been a trick question! Rhymes with Orange is always hilarious thanks to Hilary Price and Rina Piccolo, two of the funniest ladies you will ever meet, and this particular strip combines one of my favorite childhood obsessions— Ancient Egypt— with one of my WORST childhood anxieties— spelling bees! It’s a great reminder that some things never change.

This strip was part of the Popeye’s Cartoon Club celebration for Popeye’s birthday! It’s by RK Milholland, best known as the creator of Something Positive, who is also a HUGE Popeye fan! I’ve never met anyone whose Popeye trivia knowledge is as choice as his! You can also tell from this comic just how much he loves Popeye and Thimble Theatre by how many little-known Oyl family members he managed to squeeze into this comic. Can you name them all?