BARNEY GOOGLE RETURNS FOR THE HOLIDAYS 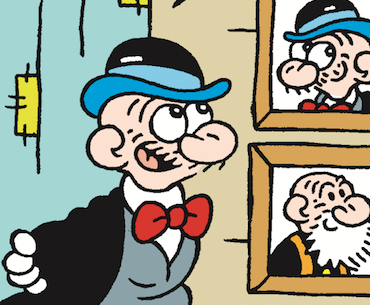 Our favorite city man is back in the hills this week, and just in time for Christmas! As a holiday treat from writer/cartoonist John Rose to all of you readers, Snuffy Smith will be visited by Barney Google from December 16 – 26. Tune in for another special week and see what plans and surprises the hillbilly family has in store for Barney. In fact, you can start reading right now!

A “taste” of what’s to come. It’s almost like Barney’s a part of the family now!

Who says it’s too late for holiday shopping? Who says late Christmas presents aren’t cool?? Also, are you all Barney Google fans?? (I mean, of course you are. You clicked on this link and read this far.) Then we have a special treat for you! The ‘Library of American Comics Essentials’ series will be releasing a special Barney Google collection, still in time for the 100th anniversary! Titled Barney Google For President, this collection features some of the strip’s most memorable stories from the 1920s (at the height of its early fame), with art by the legendary cartoonist and original creator Billy DeBeck. It is guaranteed to give you some classic laughs! Also included is an introduction by Brian Walker and a foreword and special illustration by current writer/cartoonist John Rose.

It will be available on December 31, 2019. You can pre-order your copy right here!

Just look at this magnificent cover. This would make a fine read to begin the roaring 2020s!