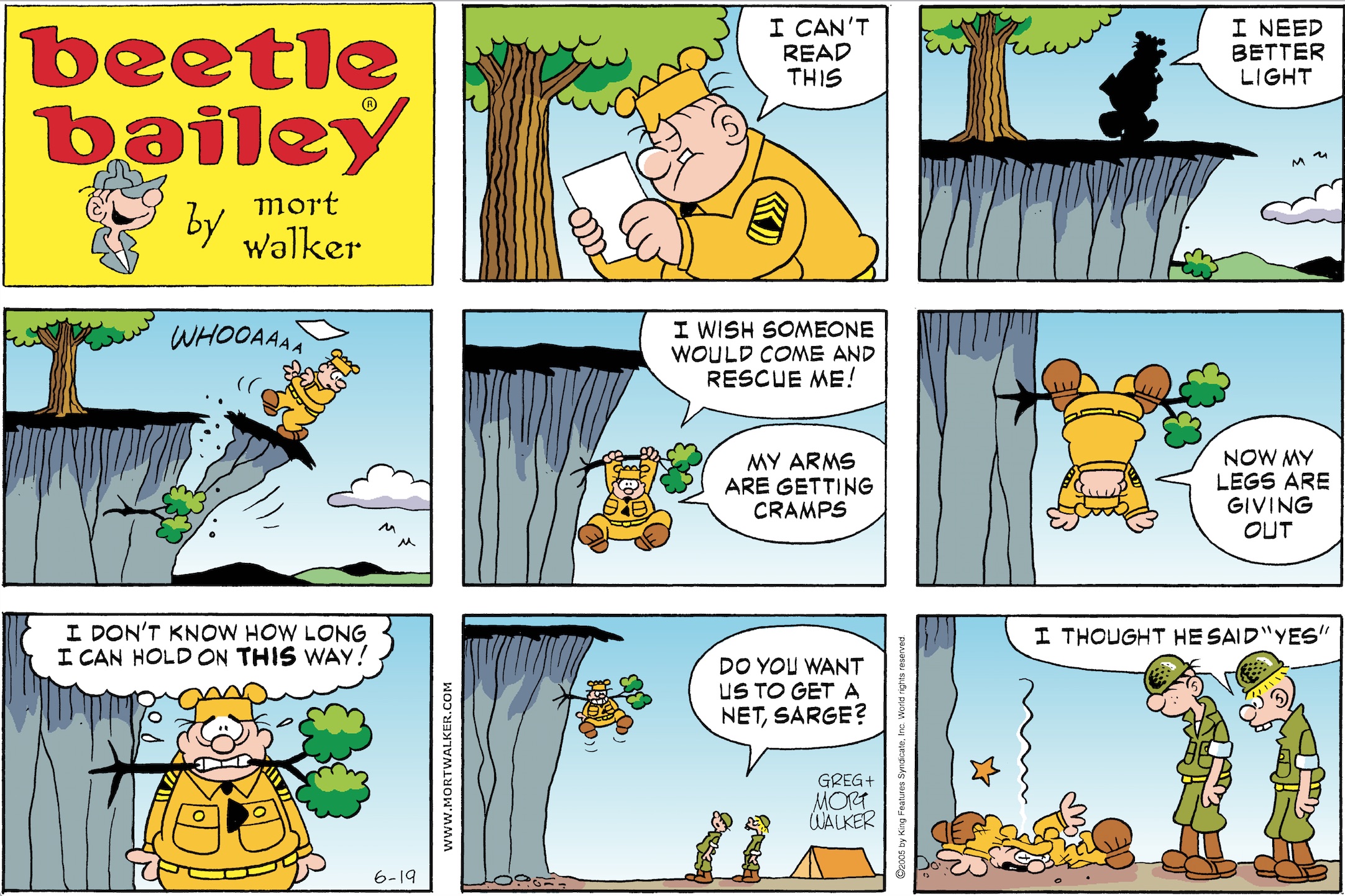 There are certain situations in comic strips that are worth repeating.  Lucy pulling the football away from Charlie Brown at the last minute in Peanuts.  The dotted lines of Billy’s wanderings around the neighborhood in The Family Circus.  Dagwood running into the mailman in Blondie.

Beetle Bailey also has recurring scenes.  Cookie sulking on the roof of the mess hall. Sarge annoying Lt. Fuzz with his squeaky chair.  Beetle getting beaten up into little pieces by Sarge.

One of the most frequently repeated gags is when Sarge falls off a cliff.  He always ends up hanging on a branch waiting to be rescued.

Here is a very early example of this scenario from the first Beetle Bailey book collection, published in 1958. 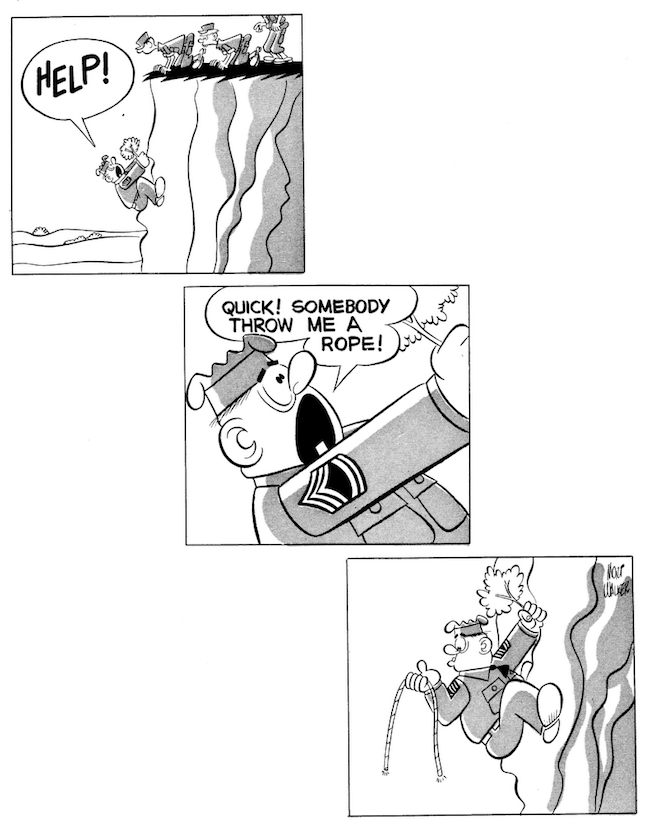 These gags often involve the clueless Zero, as in these two examples from the 1960s.

In this one, Sarge’s dog Otto is the one who is in peril.

Although some readers complain about the use of recycled themes, many others love to see the same situation repeated over and over.

Mort used to say, “no more meatball gags.” But we keep coming up with them. Some ideas never die.

Next week we will continue the Timeline series with another classic episode from 2005. 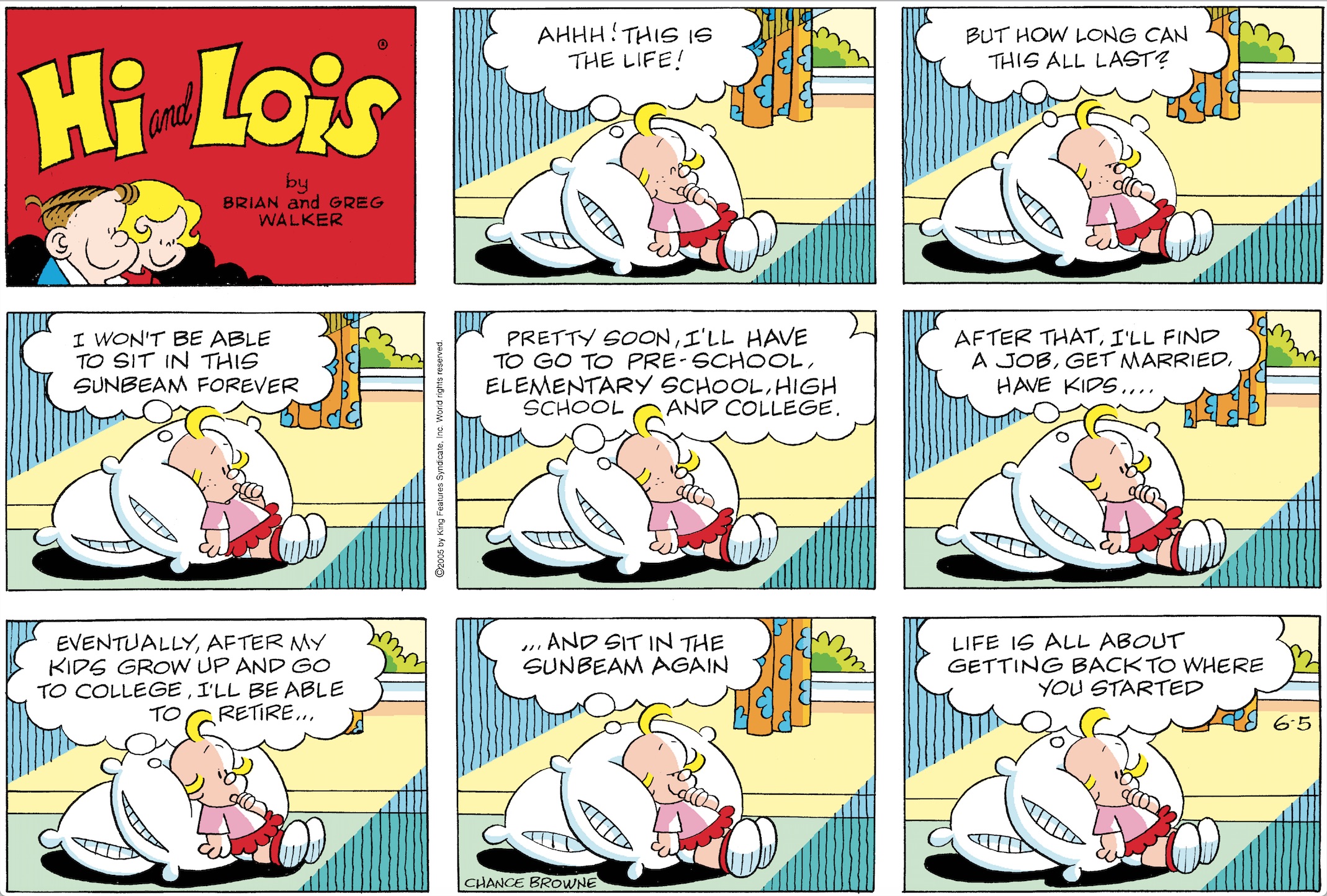 The Sunday page above is an example of what cartoonists call a “wallpaper gag.”  The repetitive images look like the patterns of a wallpaper design.

In his 1975 autobiography, Backstage at the Strips, Mort Walker shared some insights about the different methods he used for generating ideas. Here are some quotes from the book on this subject.

“A lot of gags are just visual tricks. (He referred to the Beetle Bailey Sunday page below.) It catches the eye and makes you curious, then sets you up for the punch line. We call this a ‘wallpaper gag’ because of the repetitiveness.” 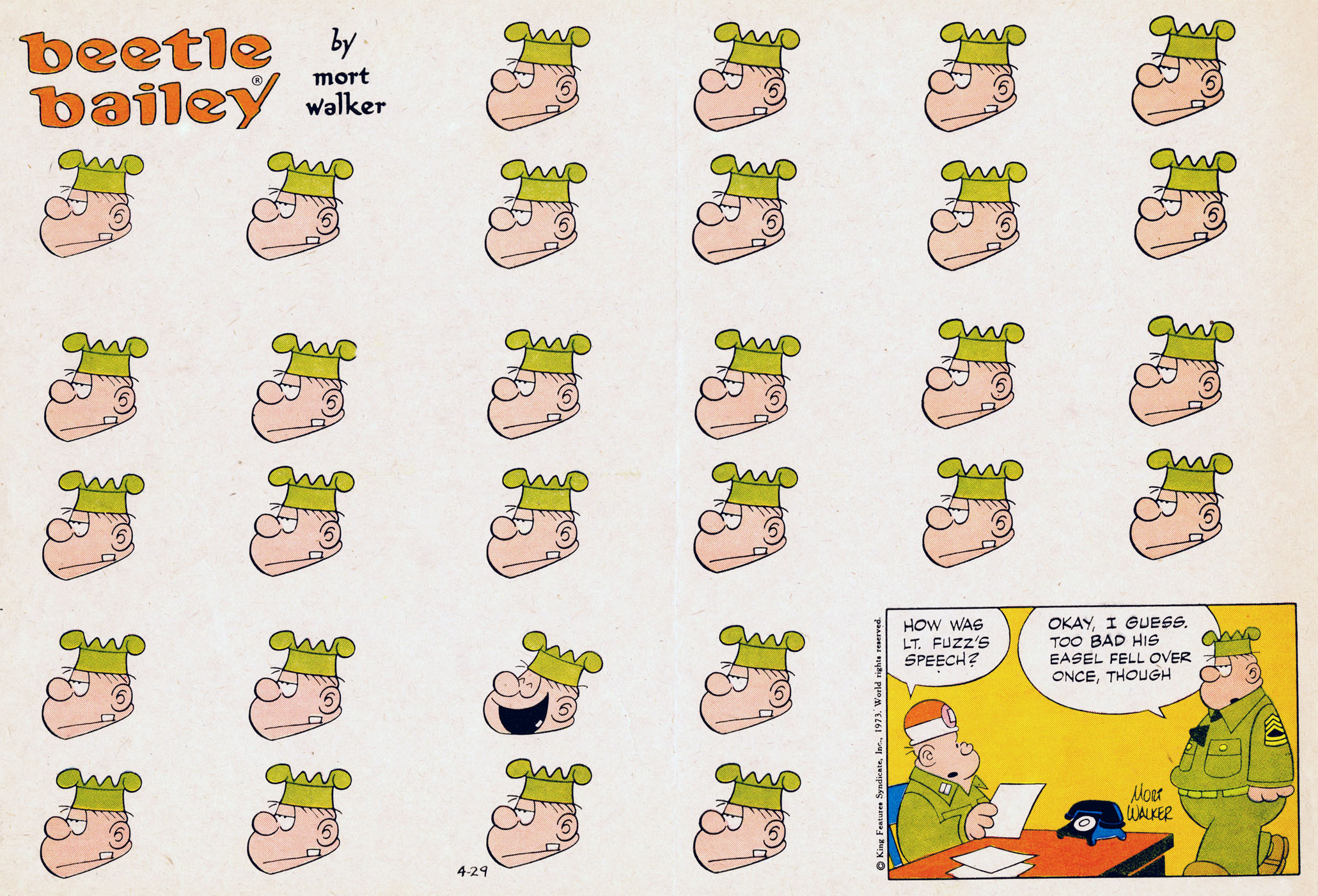 “Over the years I’ve devised many ways of developing gags. The most obvious way is simply sketching funny pictures and putting words around them.”

“Switching, sometimes know as stealing, is another highly regarded art form. It is considered legitimate if you can change anything to make it yours.”

“We can’t resist doing ‘inside gags’ for our own amusement. I doubt if readers get the double meanings.”

“There are so many gag prodders that it would be tedious to explore each one. I use them all from time to time. One will work for a few gags, then mysteriously depart and I’ll have to try a new one.”

“All too often, though, the gag method used is ‘sheer desperation.’ After an hour or so of straining, staring, and stupor, I grit my teeth, blame my wife and the President, wonder if there is another gag up there in the dusty attic of my mind, and snarl: ‘I’ll get a gag out of one word..and the word will be YES!’ I write down ‘Yes’ and make myself perform.”

These are words of wisdom from one of the greatest gag writers of all time.

We will continue the Timeline series with another classic episode from 2005 next week, so be sure to check back.