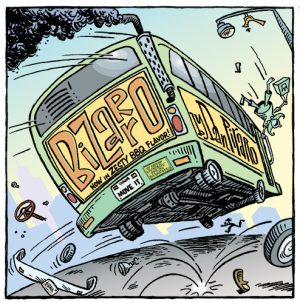 (For an embiggenated view of the cartoon below, click one damn thing or another in it.) 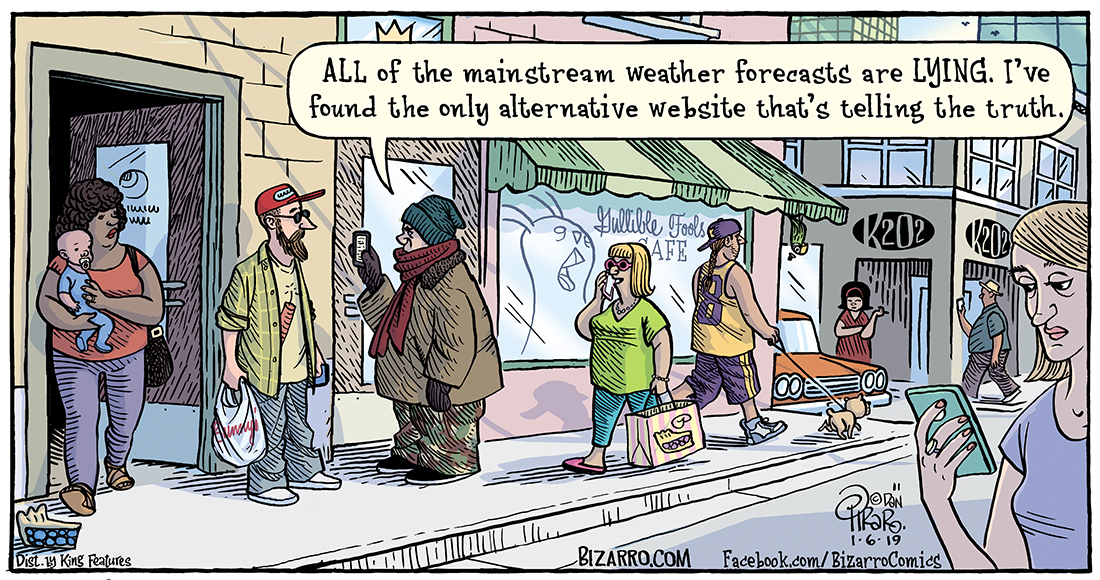 Bizarro is brought to you today by Percussive Sexism.

One way in which the Internet has been particularly effective is in showing us humans how vulnerable we are to believing bullshit. In fact, it would seem these days that the more pungent and steaming the poop pile, the more avidly people will sign up as a crusader for it.

The number of people who believed (and still believe) that a former first lady and other prominent Democrats were running a child kidnapping and sex trafficking ring out of a Washington D.C. pizza parlor makes my head explode. (See: Pizzagate…they’ll believe in that but won’t believe in evolution or climate change.)

Turns out that number is remarkably similar to the number of people who could not see from a mile away that Donald Trump is and has always been the worst kind of human our species has to offer; the sort no decent person would ever purposely allow their child to grow up to be.  If I had another head, it would explode too.

I often fantasize that if I could convince those same people that the only way to protect themselves from invisible Al Queda terrorists lurking in their home’s water pipes is to buy and wear a Bizarro T-shirt, I could make millions and then buy an island where my family and I would be safe from the kinds of people who believe this kind of horseshit.

Hmmm…maybe I’m onto something. That’s pretty much exactly how The Apricot Satan got to the Oval Office.

After all this talk of mob insanity, perhaps a refreshing dive into Wayno’s cartoon pond will be a nice diversion…

Looking at this scenario, I can’t help but believe the New Year’s Baby will fill his diaper the second he steps out the door and finds out what the world is like on his first day at the new job. 2018 was certainly enough to turn any baby into a bent, incontinent, old man in 12 months time. 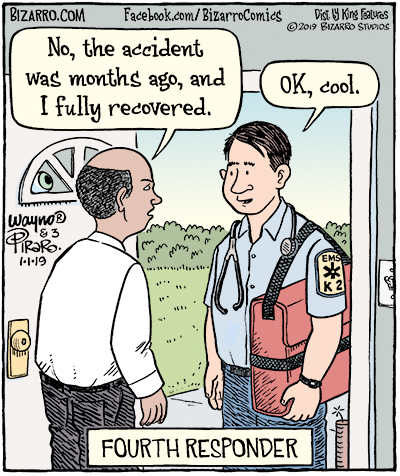 Lots of people give big ups to “first responders” but nobody ever thinks to criticize the ones who show up months late. Well done, Wayno!

Over on Wayno’s weekly blog, he always posts an interesting music video or clip, and this week’s post features an interesting cover version of maybe my favorite Dylan song. He also links to what may well be the absolute worst album of Dylan covers ever recorded and marketed. That is until Mike Pence and Alex Jones release a duet album of Dylan songs with lyrics changed to support Trump’s fear-based immigration propaganda. 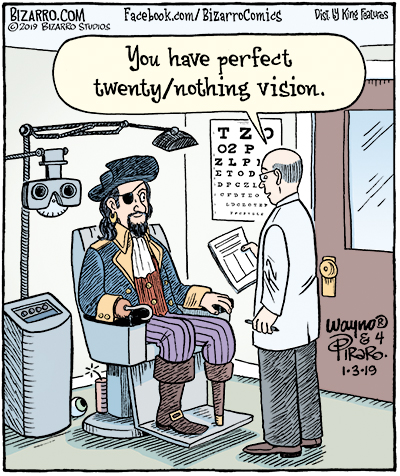 If this optometrist were more sensitive to other lifestyles, he’d have an eye chart with nothing but “R”s for his pirate patients. (As for me, I don’t wait till September to talk like a pirate. I do it all year long, mateys.) 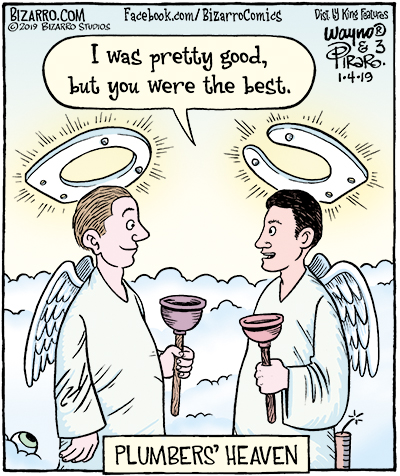 This guy is up for the Golden Ass Crack award and richly deserves it. Second place gets the Silver Plunger and third place brings home the Bronze Turd. (I don’t even want to know how they cast the third-place trophy.) 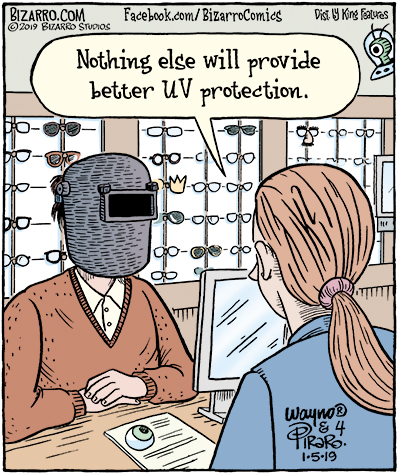 The welder’s helmet will work for a while but with the rollbacks of environmental protections by the Pizzagate-believing-crowd, in the not too distant future, we’re all going to need hazmat suits just to go outside without catching fire.

Thanks to you Jazz Pickles for singing along with us this week. The first of the year is an excellent time to reach out and say “I’ve been enjoying your cartoons online for free all year, here’s a few bucks!” and the links below to our Tip Jar, shop, prints, etc., are all great ways to do that!

DIEGO PIRARO FINE ART…where you can buy my paintings or prints of them, which look nothing like my cartoons!