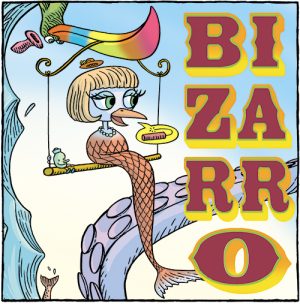 (Embiggenation of the cartoon below is a click away.) 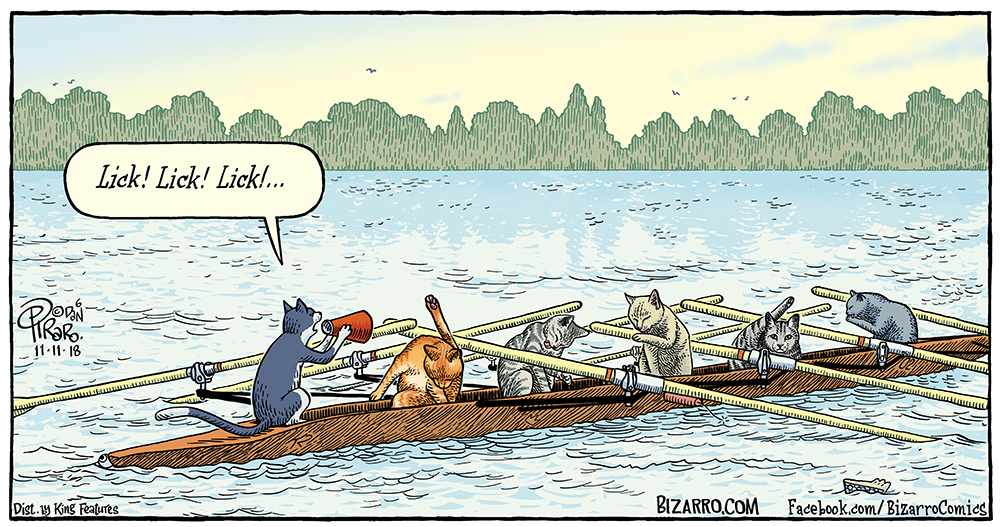 Bizarro is brought to you by the Cat’s Diary.

The cat cartoon under that link above (“the Cat’s Diary”) is one I published back in 1995. It has since been added to and expounded upon in dozens of ways and become numerous Internet memes. (Google “finding the cat’s diary” and you’ll see what I mean.) I don’t get credit for the original idea and none of the people who forward the various versions of that meme even know where it came from so every few years or so, I like to mention it on this blog. Not that it has any impact whatsoever.

The cartoon pictured above is a snapshot from another of my numerous attempts to harness the power of cats and convert it to usable energy. So far, no luck but I’ll keep you apprised of any progress.

On another topic, it has come to my attention that here in the Western Hemisphere we are fast approaching one or more gift-giving situations, so I feel inclined to alert you of some things that the people and other animals on your gift list might truly enjoy. Almost all of them are in my Bizarro Shop. Please consider having a look with the balls of your own eyes and keep in mind that for each purchase made, all of us here at Rancho Bizarro will chant your name around the campfire and light a small candle in honor of your generosity and excellent taste.

In the meantime, let’s all have a look at what Wayno created in his cartoon dirigible and dropped onto an unsuspecting populace last week… 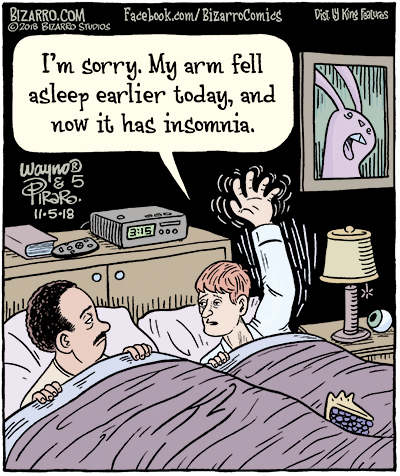 Not long ago, we would not have been allowed to show two men in bed together on most of America’s newspaper funny pages but I’m happy to say that a few small things have changed for the better in recent years and this one sailed through without raising an eyebrow.

On social media, we got a few complaints from people who thought we were just trying to be politically correct or asking what it has to do with the joke. It has nothing to do with the joke, it is simply an attempt to normalize alternative lifestyles and include them in routine, boring places like newspaper cartoons.

We’ve also made the couple interracial, but oddly enough, nobody even noticed that. I guess interracial couples have already become so boring and routine that people don’t even think to complain. Yay! Let’s hope that even though bigots have won a few recent battles, in the big picture, they’re losing the war.

Another comment informed us that this “is not how insomnia works”.  I’m certain that was very helpful to many of our readers. 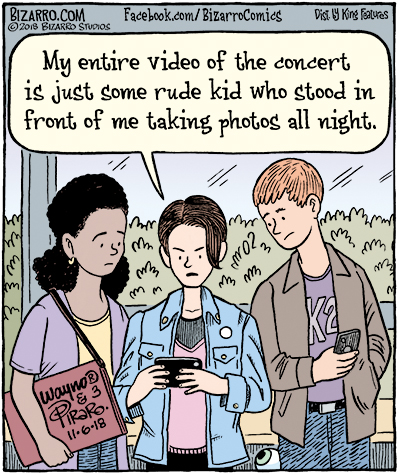 This cartoon reminded me that I’ve not been to a large, arena concert since everyone started documenting every moment of their lives with their cell phones. At my height (under 8 feet tall) I’m certain I’d see very little other than arms and phones.

I’m also thinking it won’t be long before the air at large concerts is so filled with drones that you’ll feel like you’re beneath a swarm of gigantic bees. (If you’re wondering what to get me for the holidays, a small anti-aircraft gun would be handy.) 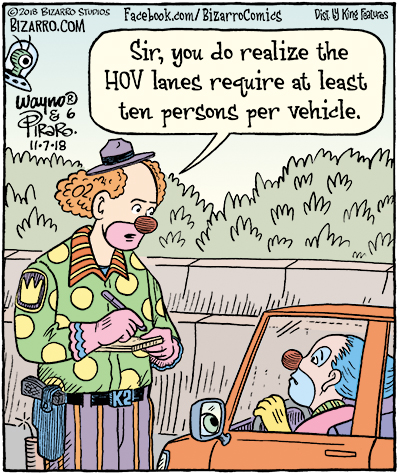 The cool thing about clown cops is that when they shoot you without justification, you only get wet, not dead.

I keep wondering if Wayno will ever run out of clown cartoons but so far—just like a clown cop squad car—he just keeps spitting out more clowns. 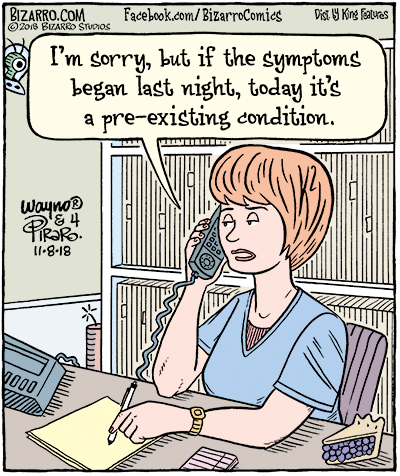 I like how even the person who simply answers the phone at a medical facility often wears surgical scrubs. I guess you never know when they might need an extra pair of hands in surgery.

I recently switched to a different doctor, however, and he and his entire staff wear normal street clothes. When I go for appointments with him, I wear surgical scrubs just to maintain balance.

Seriously, this is one of my favorite gags that Wayno has ever done. The random weirdness of it still makes me chuckle.

I didn’t predict this but I got one complaint about this one because we featured only white males. The writer, a self-proclaimed white male, was offended by that. We didn’t intend to offend anyone with this but when it comes to political and corporate white-collar crime, white males are in the majority by a LOOOOOOONG shot simply because so few others have even been allowed into that world. That’s a huge social inequity that we think we would all benefit from changing. Would he complain if the cartoon were about a KKK meeting with only white males? It doesn’t mean all white males are bigots or are in the KKK, but it is the only accurate way to draw such a scene.

Wayno also has some things to say about this gag (and every other cartoon this week) over on his weekly blog post. Check it out now.

That concludes our dive into the humor barrel for the week, Jazz Pickles. Please have a look at some of our links below, which help to keep the campfires burning at Rancho Bizarro. Posting cartoons for free on the Internet isn’t nearly as lucrative as it would be if we were getting paid for it, so get some holiday gifts here, now!