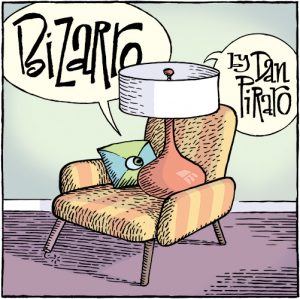 (For a more embiggenated experience, click the teddy bear.) 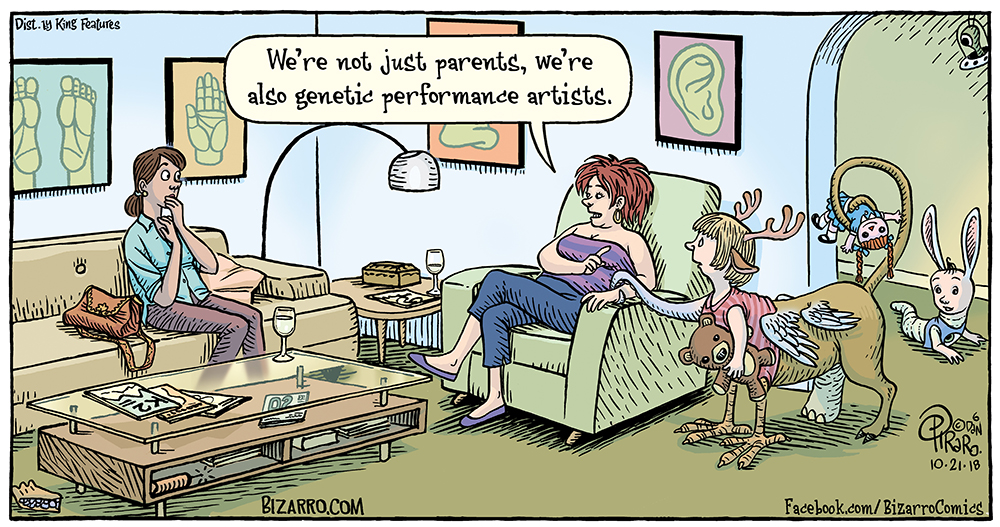 I find the science of genetic modification equal parts fascinating and scary. Amazing things have been accomplished already and the potential for wonders beyond our imaginations is limited only to the imaginations of people who are smarter than you and I can even imagine. And I’m not talking about GMO corn here, I’m talking about much larger things like extinguishing certain birth defects and treating cancer, so while it is easy to get all worked up about GMO crops, I think we need to stay level headed if we’re going to have a meaningful discourse.

But seriously, it could also lead to hoards of 1500 lbs gerbils roaming the streets hungry for human flesh. Worse yet, those gerbils could have flame-throwing capabilities and voices like Fran Drescher. Why is it that no one is talking about that?

On that cheerful note, let’s see what Wayno has been growing in his cartoon petri dish this week… 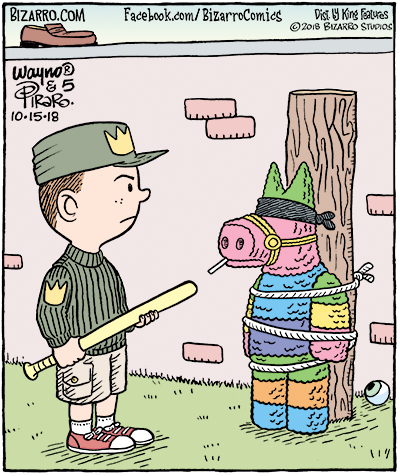 More than a few folks asked us what was funny about this. I’m not qualified to say what’s funny to other people but this is a fairly common method of creating a cartoon; start with a recognizable image and substitute the typical characters for ones that are different. The switch is sometimes amusing. Lots of people thought this one was, some did not.

If the hint of brutality is keeping you from enjoying this one, keep in mind that piñatas are inanimate objects that cannot feel pain and are bred specifically to distribute candy and toys via violence. 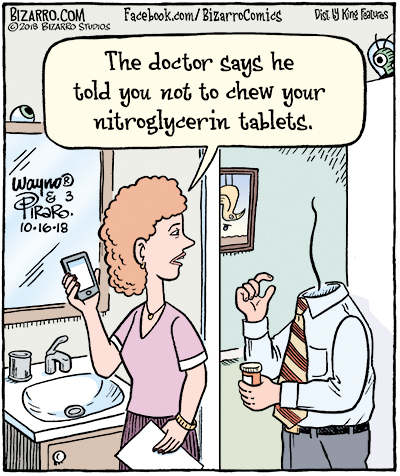 This gag vaguely reminds me of a schoolyard joke about losing ten ugly pounds instantly by cutting off your head.

Someone in a comment about this cartoon earlier this week mentioned a story of somebody stomping on nitroglycerin tablets in an effort to get them to explode. 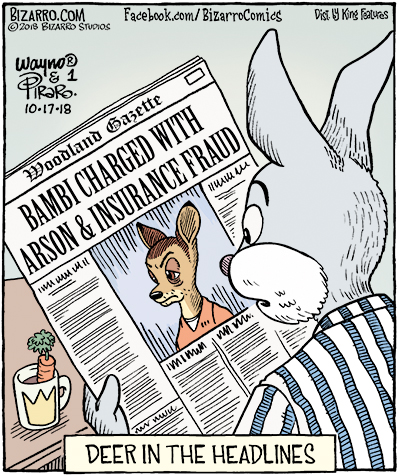 Poor Bambi. If he’d been more rich and white, he’d never have been charged in today’s America. He might have even gotten a coveted position in the current presidential administration or a seat on the Supreme Court. #ItAintEasyBeingBrown 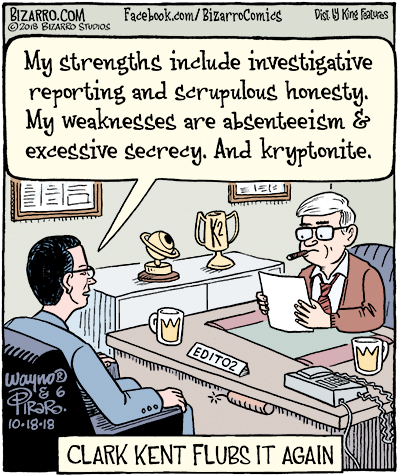 Not many people are allergic to kryptonite but as a precaution, airlines have removed all kryptonite from the snacks and beverages they serve.

WARNING: This product was manufactured in a facility that processes nuts, dairy, and kryptonite.

Wayno has a fun side story about this Superman gag as well as a sketch of a previous version of it. As always, I recommend having a looksee at Wayno’s weekly cartoon roundup. 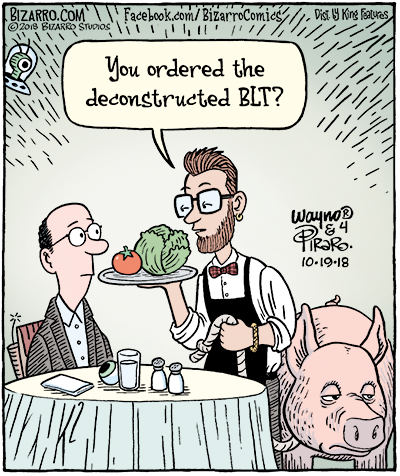 And if you’ll just step outside, I’ll point you to the wheat field. It’s BYOGrindingStone. 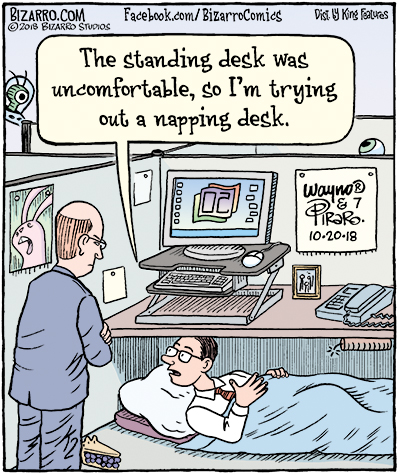 This final cartoon reminds me: if anyone knows where I can get a used hot tub desk in good condition, I’m in the market.

That’s the rabbit hole for this week, Jazz Pickles. If you’re in central Mexico next weekend, please come by my art opening and say hello. If you can’t make it, you can view the work I’ll be showing at the gallery on my new website, diegopiraro.com.   You can also buy prints and a super cool luchador enamel lapel pin in the shop there. 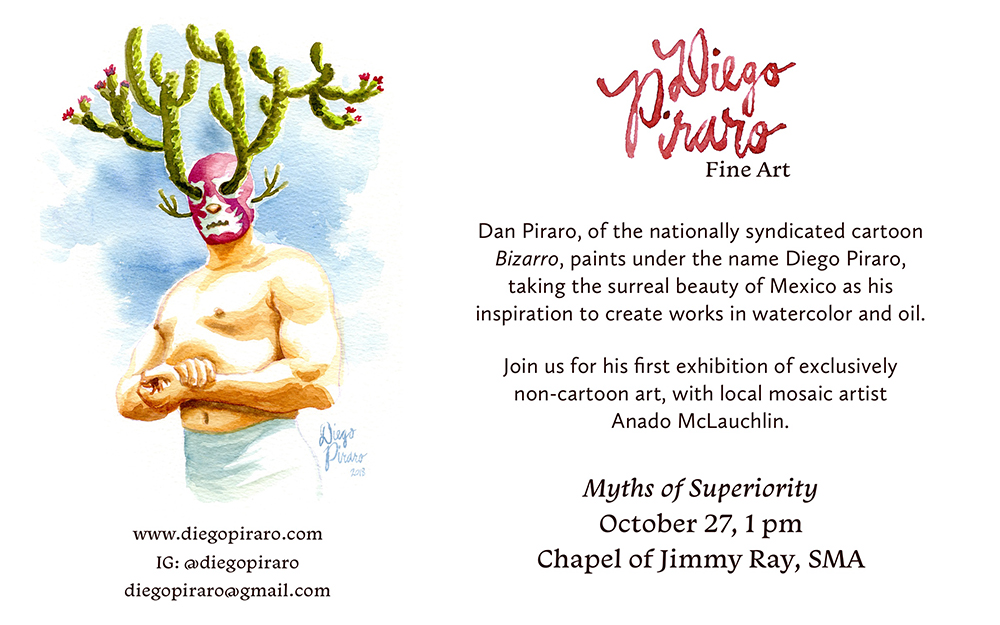