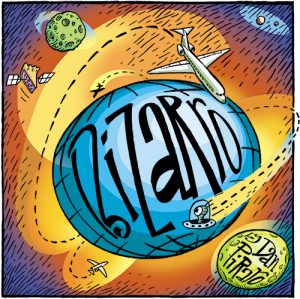 (Search for the 9 Secret Symbols in the cartoon below by embiggening it with a click.) 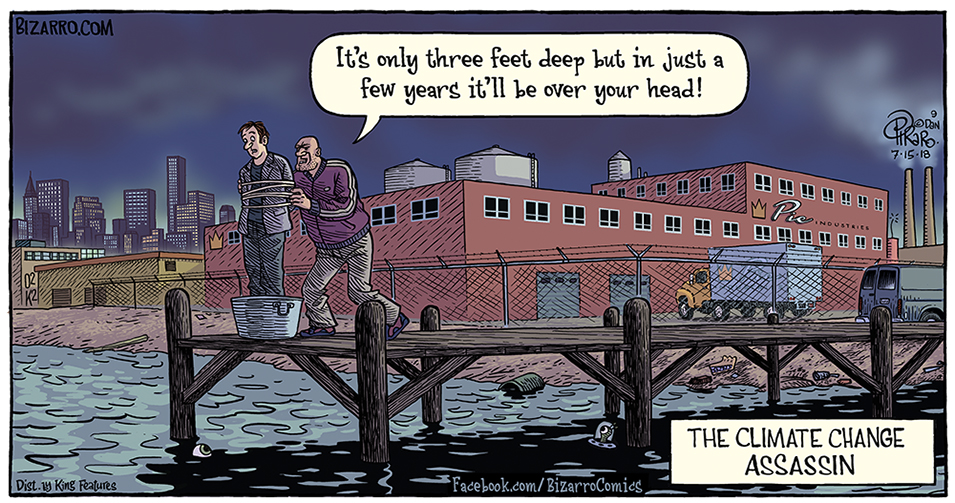 Bizarro is brought to you today by Same God, Different Messiah.

My beloved, Olive Oyl, and I are currently reading an astoundingly fascinating book called Sapiens: A Brief History of Humankind by Yuval Noah Harari. One early concept in the book is that when human societies are small—under 150 people—they operate in unison because everyone knows everyone and has a common goal. Once it grows beyond that, humans need a guiding force to keep working in unison with hundreds or thousands or millions of others they’ve never met and never will. This “guiding force” is fiction. Innumerable factions of people regularly invent myths, or “agreed fictions” to maintain order. In this way, it is possible to get strangers to work together for concepts like a god, patriotism, community, justice, etc. all of which lies entirely in the human imagination. In short, we buy into stories and direct our behavior according to what we believe.

Not surprisingly, those who are most adept at telling stories large numbers of people will buy into run the world. It doesn’t matter if those stories are “true”. Climate Change is an interesting example of this in action. There are two factions: one says the climate of the planet has been changing rapidly since the beginning of the Industrial Revolution because of human pollution and it will lead to famine, floods, storms and other Old Testament-style havoc: the other says the entire concept is a fabrication of those who would attempt to control U.S. businesses with unnecessary regulations. The second story is far more comforting and is easier to make people believe—entirely because they want to believe that they and their children will not be starving in the coming decades because America can no longer grow food.

Which to believe? For me, the choice in these matters is usually pretty easy. If I want to know if something is true in an area in which I do not have a Ph.D., like climate science or economics or which beverage best hides the flavor of arsenic, I find out what the majority of people with Ph.D.s in that field think. In the Climate Change debate, the overwhelmingly vast majority of scientists who should know, agree with the more depressing account that we’re screwed and it’s our own fault. Sure, you can find a scientist here or there who will dispute it, just as the tobacco industry and the politicians who supported it were able to dig up scientists for half a century who were willing to dispute that smoking increases your chances of getting cancer, but in the end, the truth wins out and people who didn’t believe it lose big. The same will happen here, but it will be all of us who lose because we put people in charge who are willing to tell comforting lies and make fortunes from unregulated polluting in the short term.

As the brilliant Daniel Patrick Moynihan said, “You have a right to your own opinions but not to your own facts.” Agreed fictions can be both extremely useful and devastating.

Sorry that wasn’t funny. And now, let’s point our eyes at far less depressing things and take a peek at what Wayno has been chiseling into his cave walls this week… 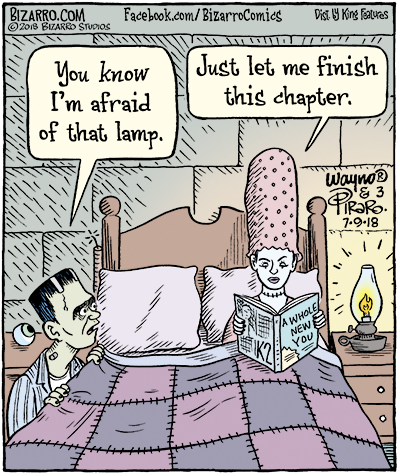 Don’t even get me started about how many objects in my bedroom I’m afraid of. (Let’s start with that weird vibrating wand in my wife’s bedside table.)
Over on Wayno’s weekly blog, he posted a sketch of an earlier version of this cartoon with a different punchline. The URL is at the end of this post. 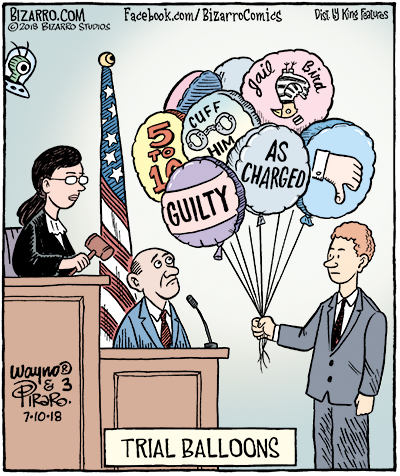 In many of my dreams of late, similar balloon deliveries are made all over Capitol Hill. One of the greatest challenges to my tranquility these days is coming to grip with the realization that The Orange Menace will likely never go to jail. Of course, I thought he’d never occupy the Oval Office either, so maybe I’ll be just as wrong. Fingers crossed and helium tank standing by! 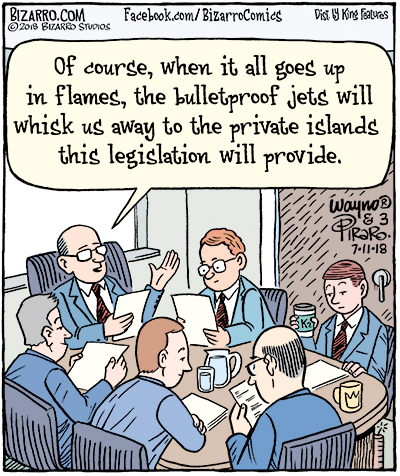 How long before Republican climate change deniers realize that a gated estate won’t protect you from blazing temperatures and famine? (Those Chinese sure can orchestrate one hell of a hoax!) 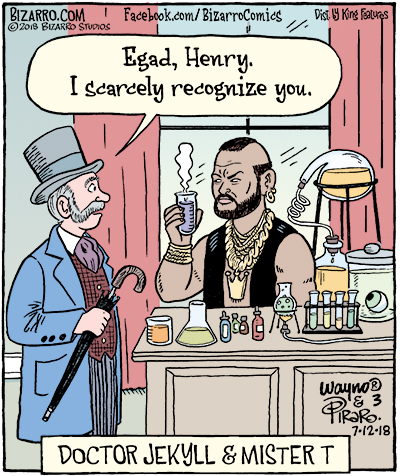 For those of you too young to remember Mr. T, he was the prime minister of France during the linoleum crisis of the 1960s. Don’t bother looking it up you can trust me. 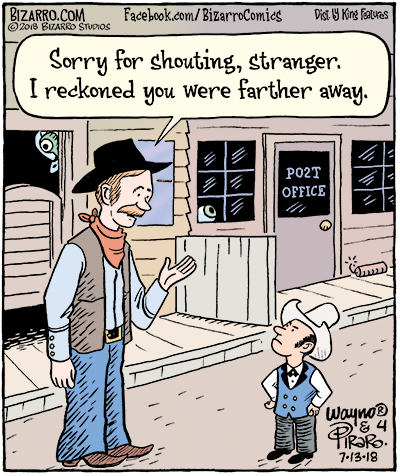 Alternate yet inferior caption: “So is that your whippet saddled up in front of the saloon?” (God, I would love to ride a whippet during a game of frisbee fetch. If I keep shrinking in my senior years, I might be small enough one day.)
Also: Don’t miss the awesome photo of a much younger Wayno dressed up like a cowboy over on his weekly blog. (URL below) 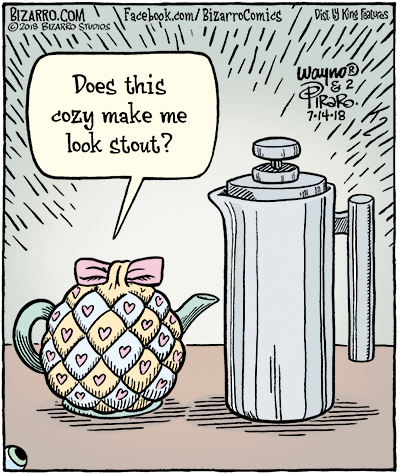 At our house, the teapot only speaks when we make psilocybin tea with it. The best part of waking up is hallucinations in your cup.

To round out the week, here’s an oldie from the Bizarro Archive Dungeon. 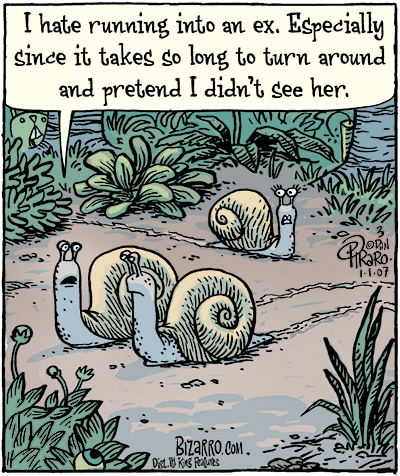 In truth, snails are hermaphroditic, which means they have to fight with and divorce themselves. Talk about difficulty in dividing possessions.

That’s the week, Jazz Pickles. Thanks so much for pointing your peepers at our stupid drawings once again. Please pop over to the Bizarro Shop where we’ve added some new enamel pin combo sets this week and even put some very slightly imperfect ones on sale. There’s also a fantastical T-shirt that you’re going to want to cover your nudity with. Here’s a large close-up of the T-shirt design.

Until next time, be happy, be smart, be nice, and resist fascism and bigotry.