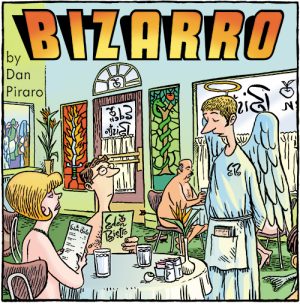 (To commence embiggenation of these two images, click any naked mammal.) 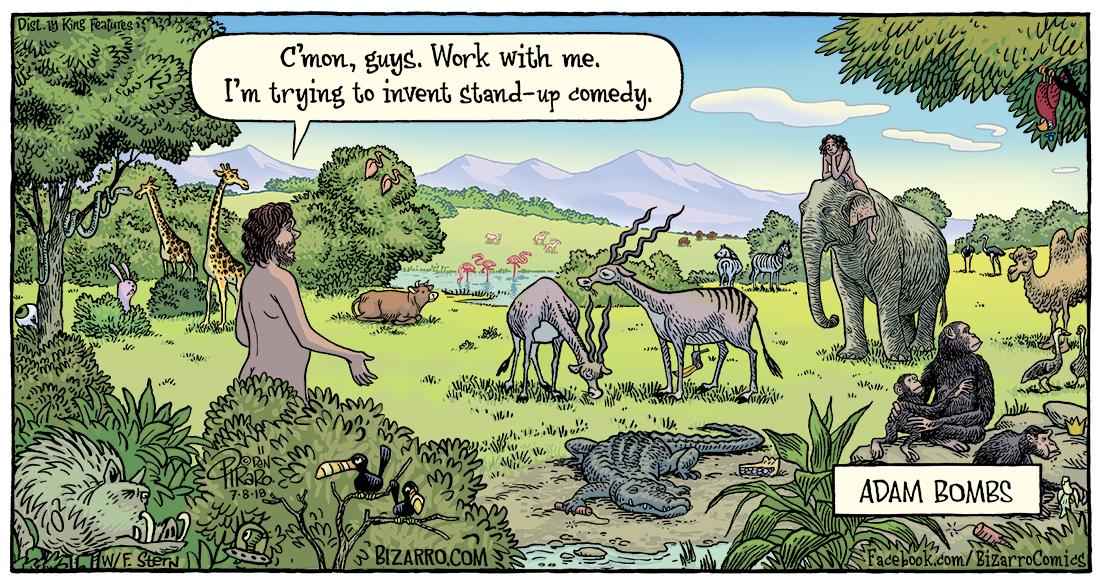 Bizarro is brought to you today by Fear Of Nudity

Thanks to veteran Jazz Pickle, Franklin Sterns for the pun suggestion which led to this cartoon.

I like the idea of the first joke teller. He or she would have been very different from the mythological white folks depicted above––probably a nomad or cave dweller––but if I’d drawn it that way, I’d have been robbed of the delicious pun in the caption. Wondering about the first joke led me to do a little research which resulted in my discovery of an ancient carving that contains the oldest known joke.  It translates into modern English something like this: A shaman, a witchdoctor, and a midwife walk into a cave. The Shaman says, “When the hell are we going to invent bars?”

No, it wasn’t very funny but it was early in the process.

Before we get to Wayno’s offerings for the week, a quick reminder that we’ve been adding a few new things to the Bizarro Shop lately. We have Set #2 of the extremely popular Secret Symbol enamel pins (the first set sold out super fast and this one is zooming, too, so hurry) and we brought back the original T-shirt in the Jazz Pickle series. Shuffle over to the shop and check out the fanciness.

You can buy the pins separately or in groups. Insider tip: The bird has been super popular and we only have a few remaining. It can be worn upside down or upside up, of course, although wearing it upside-up would just be weird. 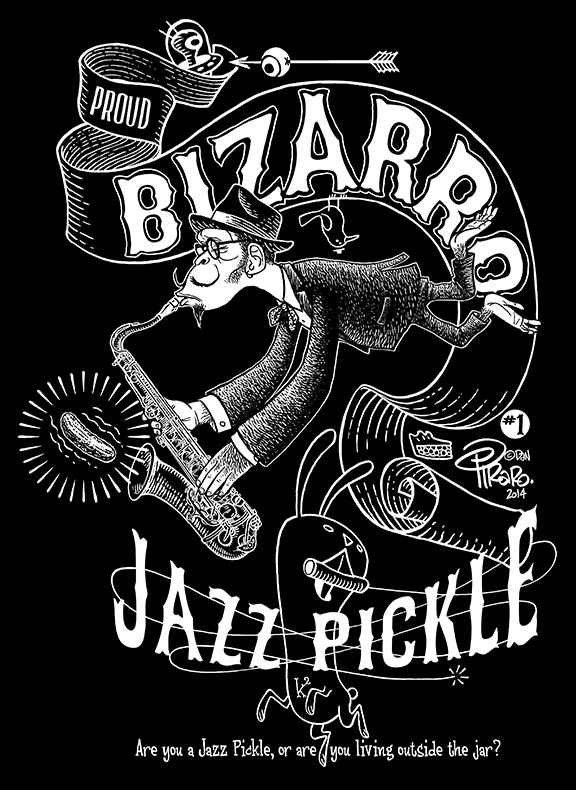 And now, the week in Wayno… 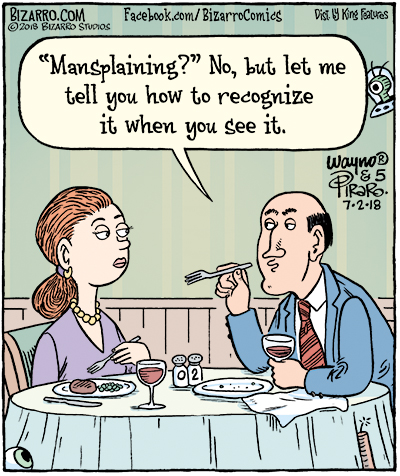 If you think either Wayno or I are foolish enough to explain this comic, you’ve got another think coming. (Yes, that’s right, it’s “think” not “thing” and I’m ‘splaining that as a grammar cop, not a man.)

Predictably, there was quite a kerfuffle of commentary over this cartoon on the Instagram posts this week. In a nutshell, it was a small number of insecure white males all pissed off because they can’t get away with bullying, racism, and sexism as effortlessly as they have in the past declaring that they are tired of being criticized by snowflakes, against lots of more open-minded people telling them they are full of shit.

As a white male who has a clear conscience on these matters (not that everyone isn’t somewhat racist, sexist, and self-absorbed) I am at least able to recognize that I (along with all white folks, especially males) have benefitted throughout my life from being accidentally born into the class that happens to hold the top rung of the social ladder. I’m not saying we’re wrong for being white and male, I’m saying our kind has treated others unfairly en masse for centuries and it’s high time people spoke up about it. The #MeToo movement isn’t just a fad, it’s a necessity.

One of my good buddies is an “outsider artist” and he sculpts with Skittles because they last longer than marble or granite. They are slightly more edible, as well.

If you’re not in the habit of checking out Wayno’s weekly blog, you should drop by for a gander. (Link at bottom of this post.) In this week’s offering, he shows the other, horizontal-cartoon-strip-shaped version of this cartoon which has another sign on the fence that is quite amusing in and of itself. His post for this week is named after it, in fact.

“Single gay male searching for same who never gets older and is willing to share the secret.”  Although some argue that Dorian Gray, like his creator, Oscar Wilde, was bi-sexual, not gay, I would argue that simply because Wilde was married and had children, he may have only been doing what was necessary to stay out of prison in Victorian England and didn’t consider himself authentically “bi”. 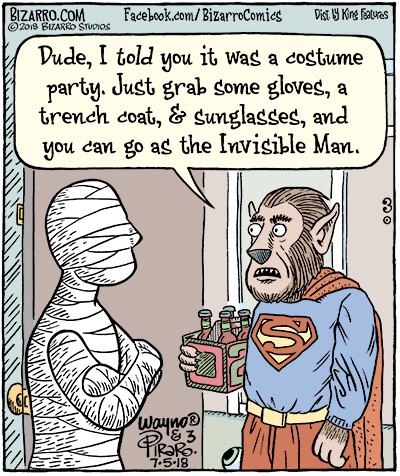 Or, remove your mummy wrapping and go as a bucket of dust. 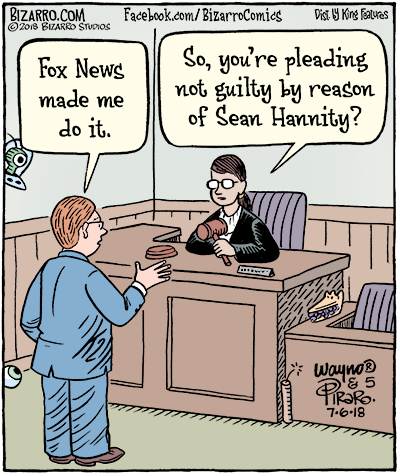 Wayno and I both love wordplay but restrict our pun-based comics to ones that we feel are truly surprising. This one definitely falls into that category for me and the fact that “Sean Hannity” rhymes with “insanity” is not only surprising but descriptive of his worldview. In my opinion. And those of most of the educated people in the world. 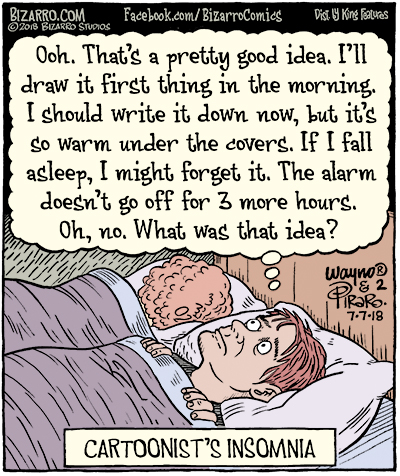 All writers of humor have had this happen. Jerry Seinfeld says he keeps an “astronaut pen” next to his bed to jot down ideas in the middle of the night. (In case you were wondering, most pens work on gravity, astronaut pens were designed for zero gravity and will write upside down.) And, yes, that means Jerry Seinfeld sleeps upside down.

Let’s end today’s post with an old fave of mine from a few years ago. 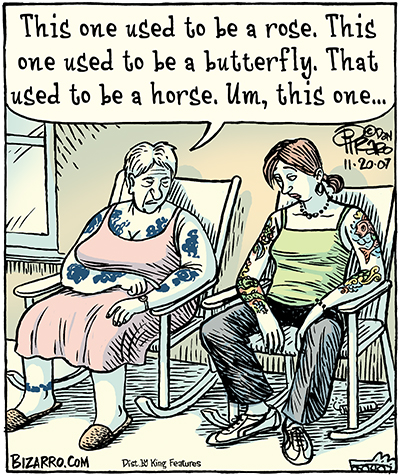 As the possessor of more than one tattoo, I certainly hope this cartoon is pure fiction. Even if it isn’t, though, at least most of the other people at the old folks’ home will also be covered in illegible blobs of color.

That’s how things shook out this week, Jazz Pickles. Thanks for reading along with us, we cherish your readership. Please have a look at some of the links below, which is how artists these days make ends meet.

Until next week, be happy, be nice, be smart, and resist ignorance and bigotry.