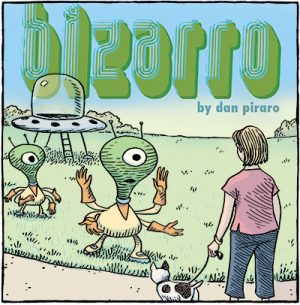 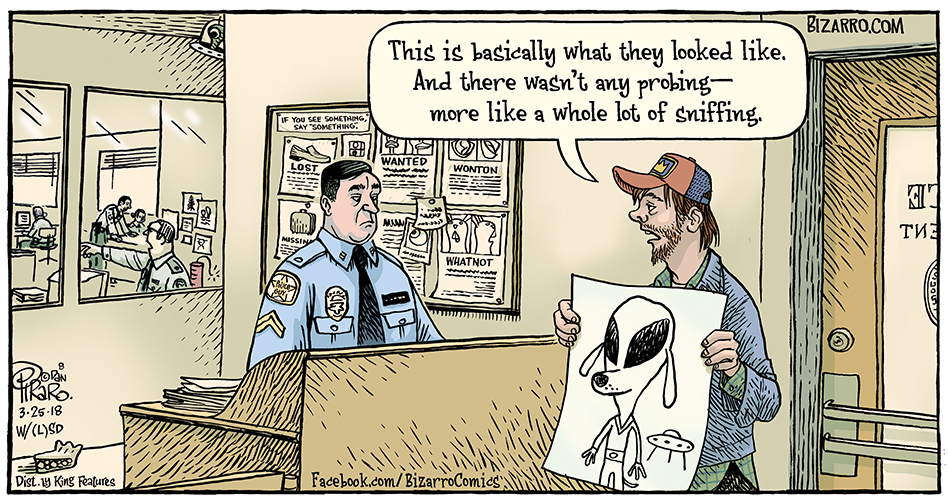 Bizarro is brought to you today by Easter Memories.

Well, it’s been a rocky couple of weeks here at Rancho Bizarro as we tried to get this new website up and running without too many bugs and broken knobs. We’re pretty close now––we think. Be aware that we’re still working on certain elements so don’t be too alarmed if you come across things that don’t work yet. They will.

Are you a believer in life on other planets? To my mind, it seems scientifically likely but based on what has happened on Earth virtually every single time one civilization descends upon another, I’m not looking forward to such beings arriving here. One might be tempted to think that if alien beings can travel that far, they are bound to be too intelligent and advanced to abuse another species, but to my mind that holds no logic whatsoever. One could argue that we humans are more socially advanced than we were when Europeans descended upon the Americas, and yet we in the U.S. are now taking food out of the mouths of the disadvantaged and splitting up families for no other reason than to score political points with racists and hillbillies. Personally, I’m not counting on extra-terrestrial visitors to be any kinder to us than we have been to those weaker than we.

On the other hand, maybe they’ll be more like dogs than humans and want nothing more than to play and be petted and fed. 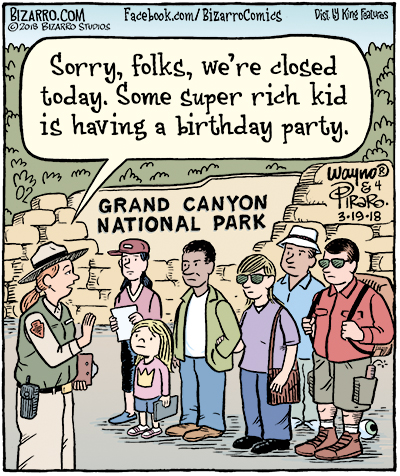 Wayno said of this Grand Canyon cartoon, “We’re all trapped at a spoiled toddler’s party.” I couldn’t have said it any better. Let’s hope the spoiled toddler loses interest in his new toy before he completely destroys it.

On a slightly different sigh-worthy note, I got a handful of comments from people asking me if this cartoon is based on reality. Here’s one fairly typical comment: “Are they now renting out national parks for private parties?” Not that I’m aware of but I can’t believe there is a single person on earth who would be surprised if the Orange Menace and his gang of witless thugs suggested exactly that. 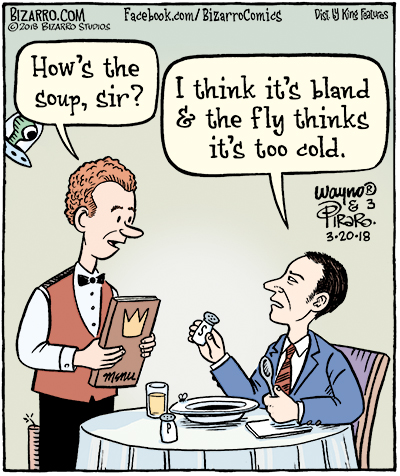 There is a long history of “fly in my soup” cartoons and this is one of them. Wayno links to some other fun examples on his blog, the URL of which is at the bottom of this post.

Speaking of flies here’s a T-shirt I designed that I think is amusing and flies think is awesome. (Grab one before some Japanese billionaire has me arrested over it.) And please poke around the Bizarro Shop sometime soon and grab some stuff you or somebody you know will like or be highly offended by. If you’re reading Bizarro online for free, it’s a lovely way to say, “Thanks for the smiles!” 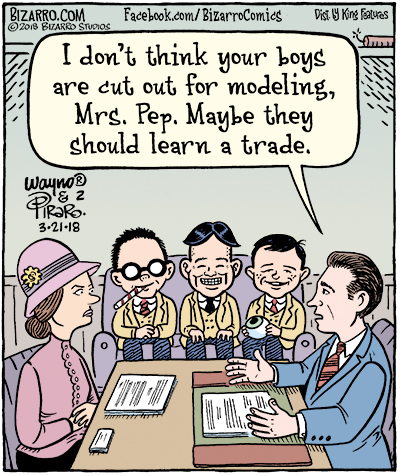 Prerequisite knowledge for understanding this cartoon: Pep Boys is an auto parts and service chain in the U.S.

Prerequisite for being a model: Ability to not look embarrassed while moving unnaturally and wearing something idiotic.

Anyone else think it’s time that Pep Boys change their name to Pep Geezers? 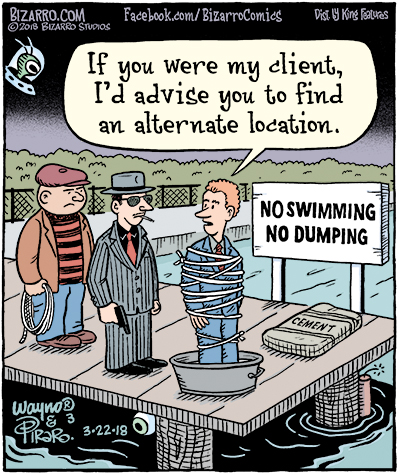 Many of you are thinking that all lawyers deserve to be thrown off a pier but I actually know two really terrific guys who happen to be lawyers and both of them are contributing to society in valuable ways. (I’ve also personally hired a few that seriously put my do-not-strangle muscles to the test, so I understand the extermination impulse.) 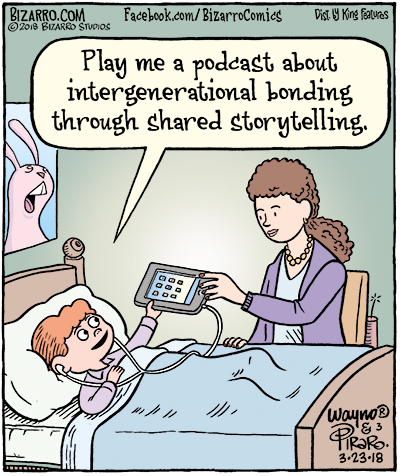 Mike Pence’s podcast about his and his wife’s five favorite spots for romantic getaways should put him to sleep pretty fast.

(Spoiler alert: #3 is Bethlehem, Pennsylvania because he says it’s like being closer to Jesus.) 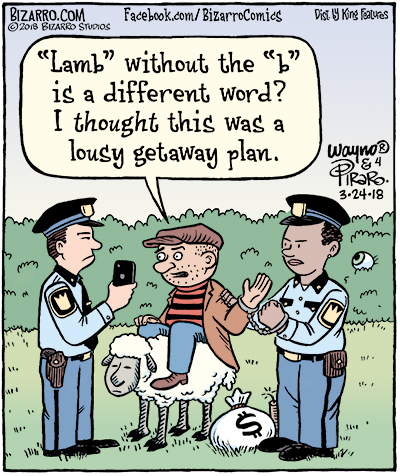 It occurs to me that if you’d just robbed a bank, putting it in bags marked with dollar signs while dressed like a cartoon criminal would be the perfect disguise. Nobody would bother you as you sauntered leisurely down the street for fear that you were a clown or street performer. (My apologies to any readers who are clowns or street performers.)

P.S. Based on many of the comments I’ve seen around the web about this cartoon, I am inclined to mention that “on the lam” is an expression used for someone who is running from the law. “Lam” in this case does not refer to a Lamborghini. (Is there an eye-rolling emoji?)

Thanks for skipping this far down the sidewalk with us, Jazz Pickles. Please check out my shop where you can get your official Bizarro Jazz Pickle enamel pin and other fun things for your home and person. More products coming soon!

Also, check out the links below for more fun!