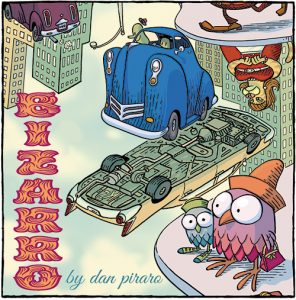 (Get into the whole embiggenation thing by clicking on the headlight of the red car.) 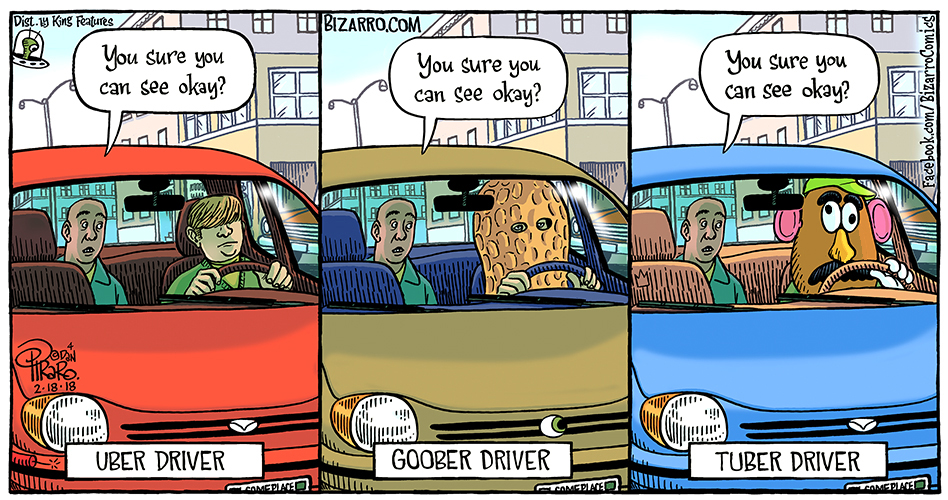 Bizarro is brought to you today by Actual Fortune Tellers.

I’ve taken Uber or Lyft a few dozen times and with one exception, have always had a positive experience. The exception was in LA and the guy driving our car seemed friendly enough to Olive Oyl and me but was prone to honking at other drivers, cussing them out under his breath, and weaving through traffic to cut people off that he thought had offended him. His driving was such a stereotypical example of road rage that it seemed like a scene from a sit-com, but scary. (I once watched 8 minutes of an episode of Two and a Half Men and found it equally scary, but in a different way. Getting Charlie Sheen as your Uber driver would perhaps be a perfect storm. )

When it was over, we were expected to rate the driver on our smartphone but hesitated to be truthful because we didn’t know if he would know we had given him a low rating and we knew that he was required to rate us as passengers, too. If we trashed him and he knew it, he could trash us. Which could make the next driver refuse to give us a ride.

This is one of the many dark sides of the Internet conveniences we have come to depend on. Not unlike Menken’s uncanny prediction of where America’s democracy would lead (click the blue link above or these blue words here for the quote I’m talking about) many have predicted that Internet technology will be our demise. I agree with that view in a variety of ways, from fake news swaying elections to the personal despair one feels from living most of one’s life inside a tiny, electronic screen. For myriad frightening ways in which technology could end up destroying us––some of which are already happening––watch a few episodes of the often brilliant TV series, Black Mirror on Netflix.

Hey! Let’s have a look at what Wayno did this week while I was hiding under the covers… 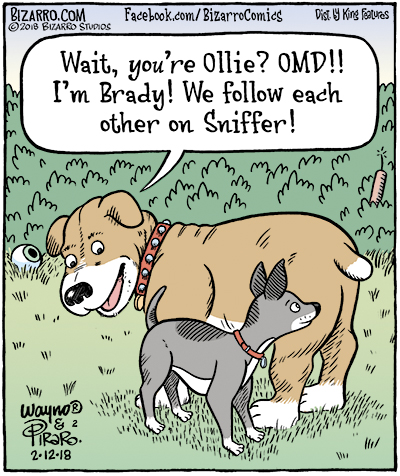 What this cartoon doesn’t mention, for good reason, is that Brady is hooked on all forms of social media for dogs including the casual sex site, “Humper,” where he goes by “LustyLab869”.  Brady reports that the downside of Humper is that you never know if you are communicating with a real dog or just some perverted human’s lower leg.

In Wayno’s (much more brief) blog this week, he mentions being contacted by a guy who actually runs a similar Internet site for dogs as the one in this cartoon. Of course there is. 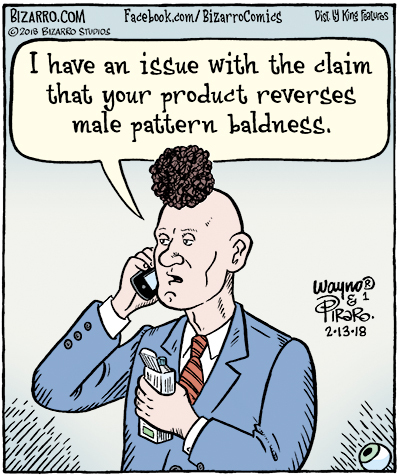 When I was in high school in the early 1970s, I had a big afro, which some of my friends called a “full fro”. (Yes, this is a picture of me when I was about 16 years old.) Since it seems that virtually everything becomes a fashion trend at some point, I hope I live to see the mini-fro pictured here become a thing.

Is it profiling to judge somebody based on their profile photo? Why are so few profile photos taken in profile? Does it bother anyone else when an adult uses a photo of their child or grandchild as their own profile photo? Do they not realize that it is a species-wide trick of evolution that they and their family think their new baby is of any interest whatsoever? 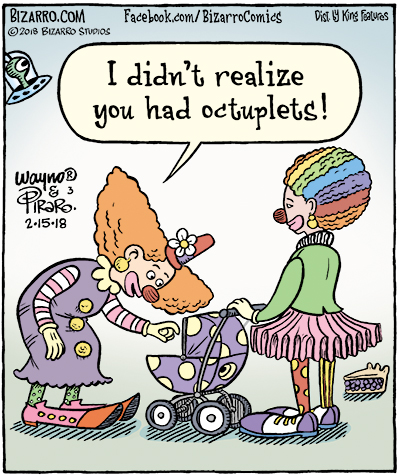 I got an alarming number of questions about this clown cartoon. Some said things like,

“I could not figure out what this meant, nor could my husband nor any of the people at my job, some of whom are brain surgeons and astrophysicists, nor anyone in the state of Ohio. We’re big fans, please enlighten us!”

Okay, you did not actually ask every person at your job or in the state of Ohio about this. There is no shame in not understanding a cartoon and therefore no need to mitigate your confusion by pretending you’re in the same boat as a lot of fictitious people with impressive college degrees.

The meaning is simple: traditional Ringling Brothers Circus clowns are known for packing far-too-many of themselves into small cars and pouring out one at a time to the delight and amazement of the audience. Wayno is simply extending that tradition to clown baby carriages (and uteruses, by extension.) Perhaps so many people missed this because fewer people go to Ringling Brothers Circuses these days, which is a good thing because they have a long and well-documented history of abusing elephants and other animals. Modern-style circuses and clowns like those found in Cirque du Soleil, are much more entertaining and don’t use animals.

Dentists and health insurance in the U.S. are so expensive that it is amazing that anyone can still afford to have teeth. Is it a coincidence that those Americans who tend to have fewer teeth are also most likely to vote for the political party that keeps health care prohibitively expensive?  Just wondering if there’s a connection. 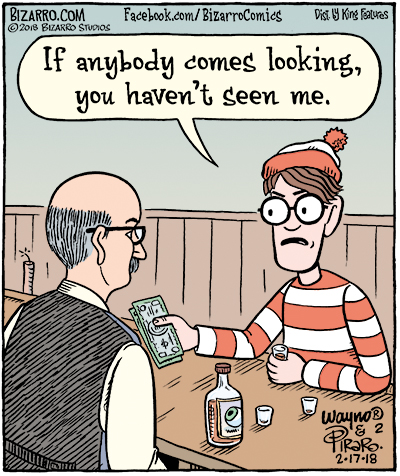 This is probably the easiest “where’s Waldo” puzzle you’ll ever see. I spotted him in less than one second. I think Wayno should have at least made the wood panels on the wall red and white stripes to make it a little harder.  I found out from some Internet comments this week that in other countries, this character goes by different names; presumably because “waldo” means something unappealing in some languages, like “nose hair” or whatever. In Norway, he is called “Willy” but in the U.S., “Where’s Willy” is a whole different game.

Thanks for following along this far, Jazz Pickles. I hope you have a dandy week and continue to encourage you to check out our links below, which help us make ends meet in a world where the Internet has made comics more popular than ever but less monetarily valuable. One way I’m getting by is by selling stuff. I have some new enamel pins that I think are really cool. Here’s the one I’ve been wearing this week.