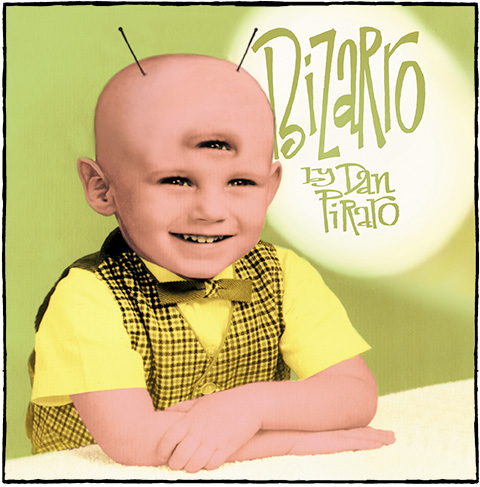 (To achieve an embiggenated view of the male-pattern comedy below, click any nose in the drawing.) 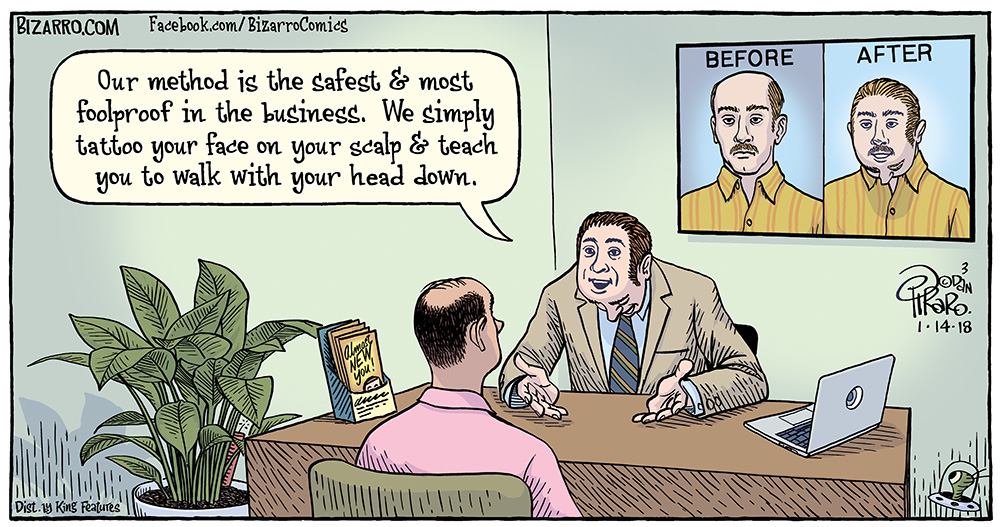 Bizarro is brought to you today by Devolution.

Most of you Jazz Pickles are up to speed about what’s been happening at Rancho Bizarro lately but for those who are not––since January 1, I’m only writing and drawing the Sunday cartoons and my good friend and longtime collaborator, Wayno, is drawing the Monday through Saturday cartoons. We sometimes collaborate on the concepts for the weekday gags, but Wayno’s doing the heavy lifting (of pencils, pens, kneaded erasers, glasses of wine, etc.) With a little practice, you should be able to tell the difference between our drawing styles and our signatures. (Hint: his signature starts with a “W”)

So the cartoon and title panels above are by which artist? That’s right, me. You can tell because the cartoon is drawn in my style and it has only my signature, and the title panel is a photo of me when I first arrived on this planet.

I recommend embiggenating this cartoon so you can enjoy a better view of the visual aspect of the punch line, and also avail yourself of a small chuckle by reading the title of the pamphlet on his desk.

Let’s jump back in time to last Monday’s cartoon now, shall we? (Hint: Yes, we shall.) 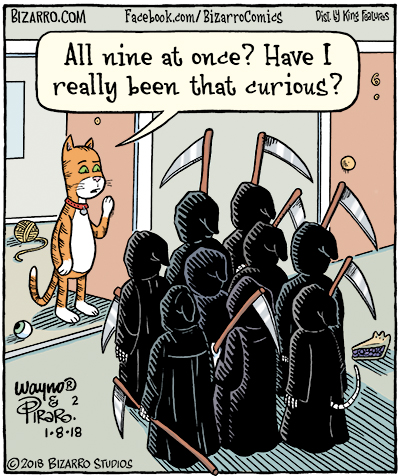 To continue the quiz, which of us did this cartoon about the soon-to-be-dead cat? One clue is that I typically draw cats a little more realistically (see here) whereas Wayno tends to have more of a retro cartoon style.  Regarding the signature, you’ll see that my signature does, in fact, appear here but it is beneath one that starts with a “W”. That’s because, for legal reasons, my name needs to be on there because I originated Bizarro, but since Wayno’s is on top, it signals that this is one that he drew.

If you got that correct, give yourself 11 points. If you’re wearing a poncho or a fireman’s helmet, give yourself 8 more points just for beating the odds that you’d be wearing either of the things I randomly thought of off the top of my head just now. 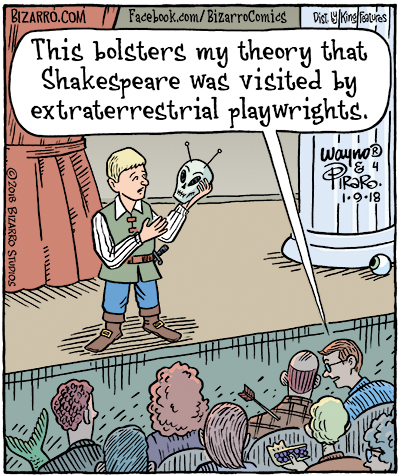 Many people have trouble believing that old-timey humans could have done some of the amazing things they are credited with––like building huge pyramids and other wonders of the ancient world––so they insert into the story more intelligent and advanced visitors from outer space to spearhead the project. What they don’t explain is why a civilization sufficiently advanced to travel here from light years away would waste their contact with us on teaching us to build relatively useless faux hills.

If you believe aliens from outer space had something to do with ancient building projects here on Earth, deduct 327 points from your score.

Over on Wayno’s blog today, he claims that this cartoon was the result of a prop department difficulty. 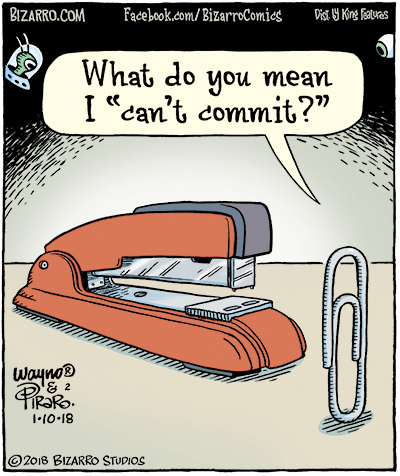 Talking paper clips are the kind of thing you don’t get from less bizarre cartoon features like Dennis the Menace or Family Circus. We’re proud of that here at Rancho Bizarro in central Mexico, where I live and work, and also at Bizarro Studios North, where Wayno works in a secret, underground bunker in Pittsburgh. Were it not for the magic of the Interwebs, we’d have to be in the same geographical location to collaborate or rely on more intelligent and advanced visitors from outer space to communicate for us. But then, our cartoons might just be big, pointy piles of rocks such as those mentioned above. 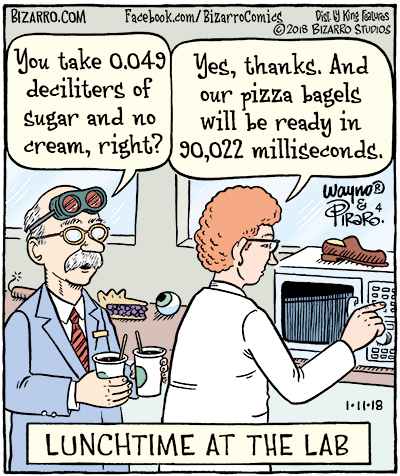 I don’t know what kind of microwave Wayno has but I need to nuke my pizza bagels for more like 210,000 milliseconds. Of course, at high altitude, you need a bit more time on the microwave and I live at 1,981,200 millimeters.

And for you science nerds, we’ve already been told numerous times that “deciliters” is a liquid measurement so you wouldn’t use that for sugar. If that bothers you, write “sweetener” on a post-it note and paste it over the word “sugar” on your screen. Then award yourself 13 and a half points for being a science smartypants. 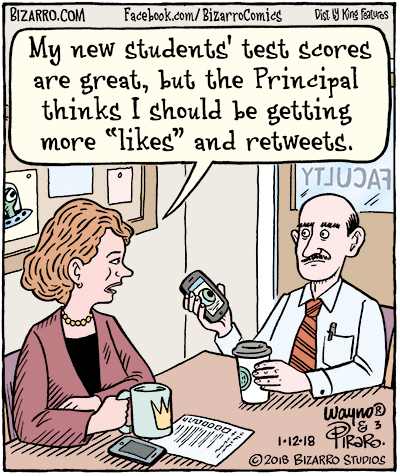 Now that we all live and die by the World Wide Junior High (the Internet) nothing matters as much as likes. 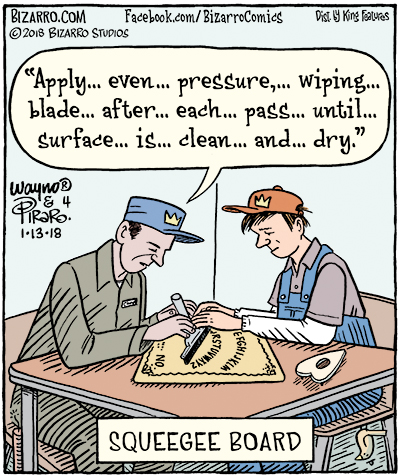 I attended a fundamentalist Christian church in Oklahoma for a few years when I was a teen and they actually used to preach against letting your children play with Ouija Boards because the Devil could use the messages to control them. I am completely serious.

Sane people often wonder how fundamentalist Christians could bring themselves to vote for such an obviously immoral trash sack like Tiny Hands, but when you live in a fantasy world of fear and ignorance, you can convince yourself of anything. Or maybe Ouija Boards told them to vote for the Devil. Who knows?

That’s the roundup for this week, Jazz Pickles. Thanks for trotting alongside the motorcade. Below are some links you may find interesting, such as Wayno’s social media feeds and a few ways you can help support our efforts here at Rancho Bizarro. Until next week, be smart, be happy, be nice, and resisit fascism and ingorance.