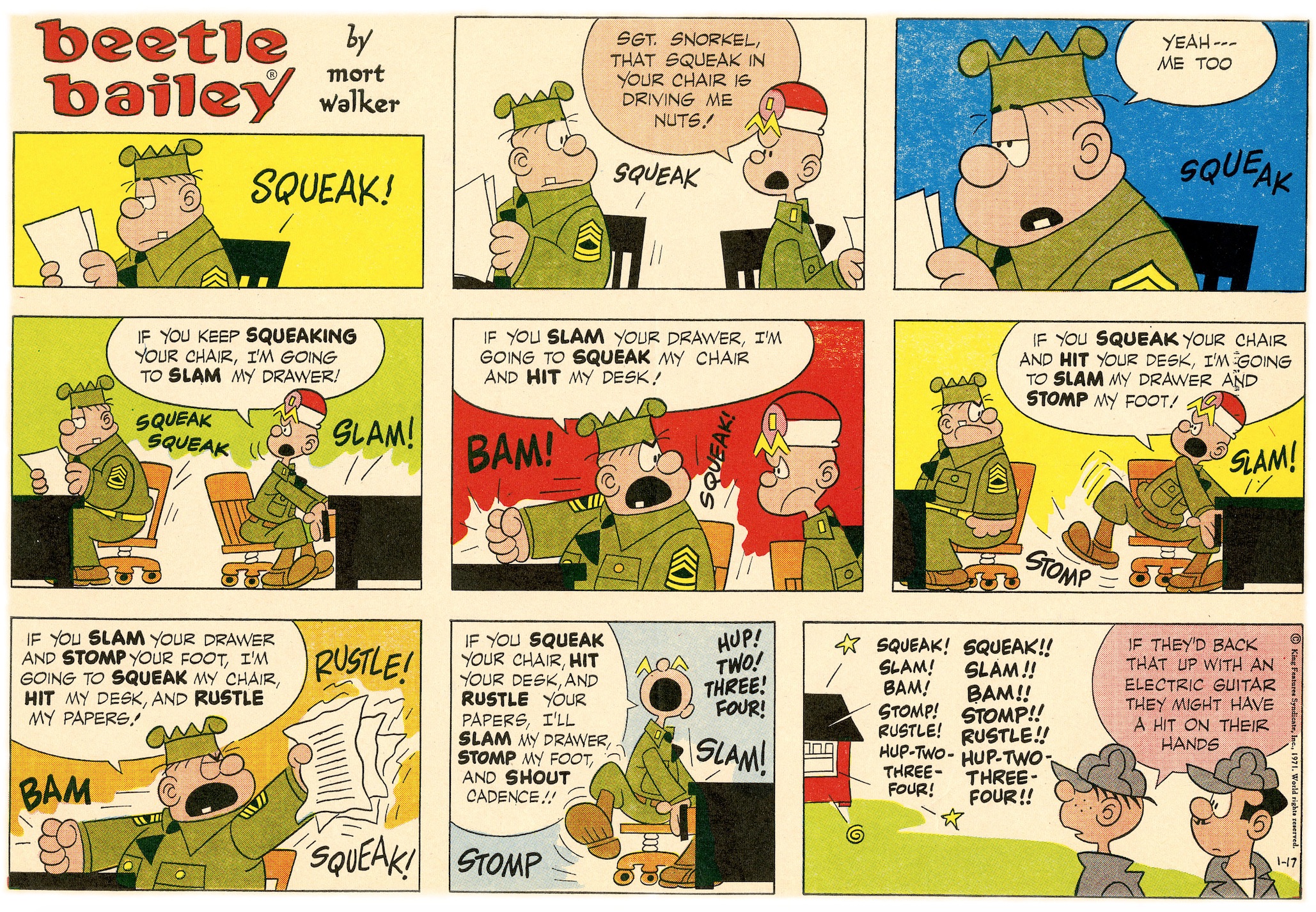 Sergeant Snorkel and Lieutenant Fuzz share an office. They have very different personalities and this leads to inevitable conflict. One of their major disputes is when Fuzz complains about the squeaking of Sarge’s chair. The episode above is a classic example of this scenario.

There are many similar recurring gags in Beetle Bailey. Sarge is always falling off cliffs needing to be rescued. When the men criticize Cookie’s meals he sulks on the roof of the mess hall. General Halftrack never hears from the Pentagon. Chaplain Stainglass gives boring sermons. Lt. Flap wears wild clothes. And, of course, Beetle is shown regularly goofing off under his favorite tree.

Writing a daily humor strip seven days a week is a daunting task. Readers expect a new joke in every strip. Cartoonists are not supposed to repeat themselves. But when an idea works, it’s hard not to go back and try putting a different spin on it.

The Yiddish term for this is “shtick.” It refers to a gimmick or comic routine that is associated with a particular comedian. Audiences understand that a certain kind of joke is a performer’s “shtick.”  If it is used too often it can become a “tired cliché.”

Charles Schulz identified “twelve devices” that he felt were critical to the success of Peanuts. They were: 1. the kite-eating tree; 2. Schroeder’s music; 3. Linus’ security blanket; 4. Lucy’s psychiatry booth; 5. Snoopy’s dog house; 6. Snoopy himself; 7. The Red Baron; 8. Woodstock; 9. the baseball games; 10. kicking the football; 11. the Great Pumpkin; 12. the little red-haired girl.

These “devices” were a type of “schtick” and were repeated regularly, like the changing of the seasons. Recurring gags give readers a comforting sense of familiarity. They have been used successfully in Peanuts, Beetle Bailey and many other comic strips and are often what people remember most about their favorite features. Sometimes cartoonists are allowed to repeat themselves.

Stay tooned for more classic episodes in our Timeline series.