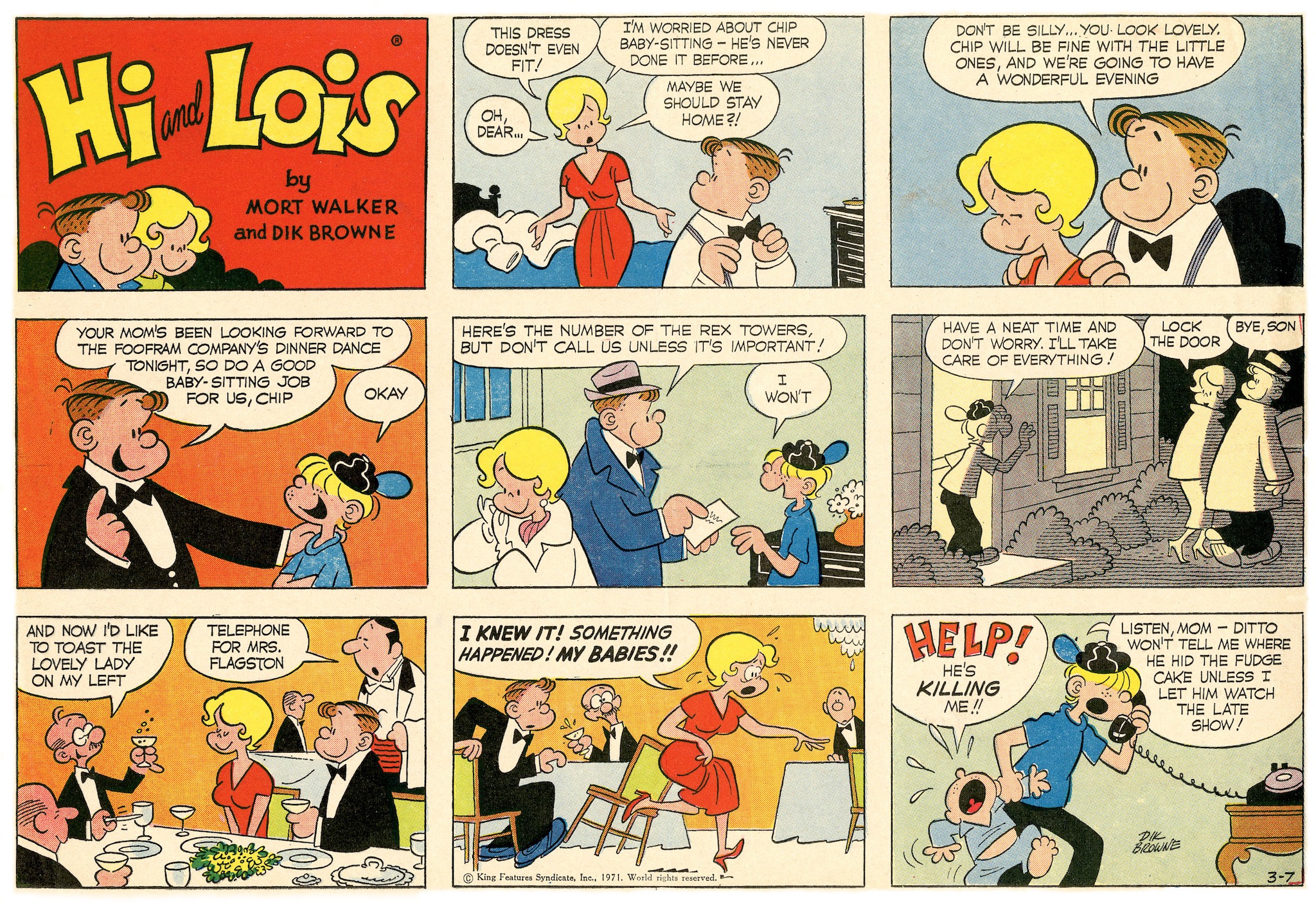 In the episode above, Lois says that this is the first time that Chip has stayed home alone to take care of his younger siblings. It is hard to believe he has not offered to babysit for the kids before, but we’ll have to believe Lois.

Chip was eight years old when Hi and Lois started in 1954. Mort Walker and Dik Browne eventually decided that they needed a teenager in the strip so Chip started to gradually mature. By the 1960s, he was fifteen years old and has stayed that age ever since.

Apparently, Hi and Lois didn’t go out much. The Foofram Company dinner at the Rex Towers was a formal affair that they had been looking forward to. After Hi gives Chip a pep talk they say goodbye nervously. At the dinner, Lois looks like she is finally enjoying herself as Mr. Foofram makes a toast. Then the inevitable phone call comes and Lois rushes frantically to answer it. Fortunately, the crisis at home turns out to be not as serious as she had feared.

When this episode appeared, I was in college, so I wasn’t doing any babysitting at that time. I do remember watching my brothers and sisters on occasion when I was Chip’s age.

In 1997, my daughter was eleven and some new neighbors with a young child moved in next door. It was the perfect opportunity for her to break in as a babysitter with some parental supervision until she was old enough to do it on her own. She continued to watch the neighbor’s kids until she graduated from high school. It was an ideal situation for them, since my daughter was almost always available and they didn’t have to drive her home. She eventually bought herself an iMac computer with the money she earned. The experience also inspired her to pursue a career in teaching.

Next week we will continue our journey through 1971 in the Timeline series, so stay tooned. 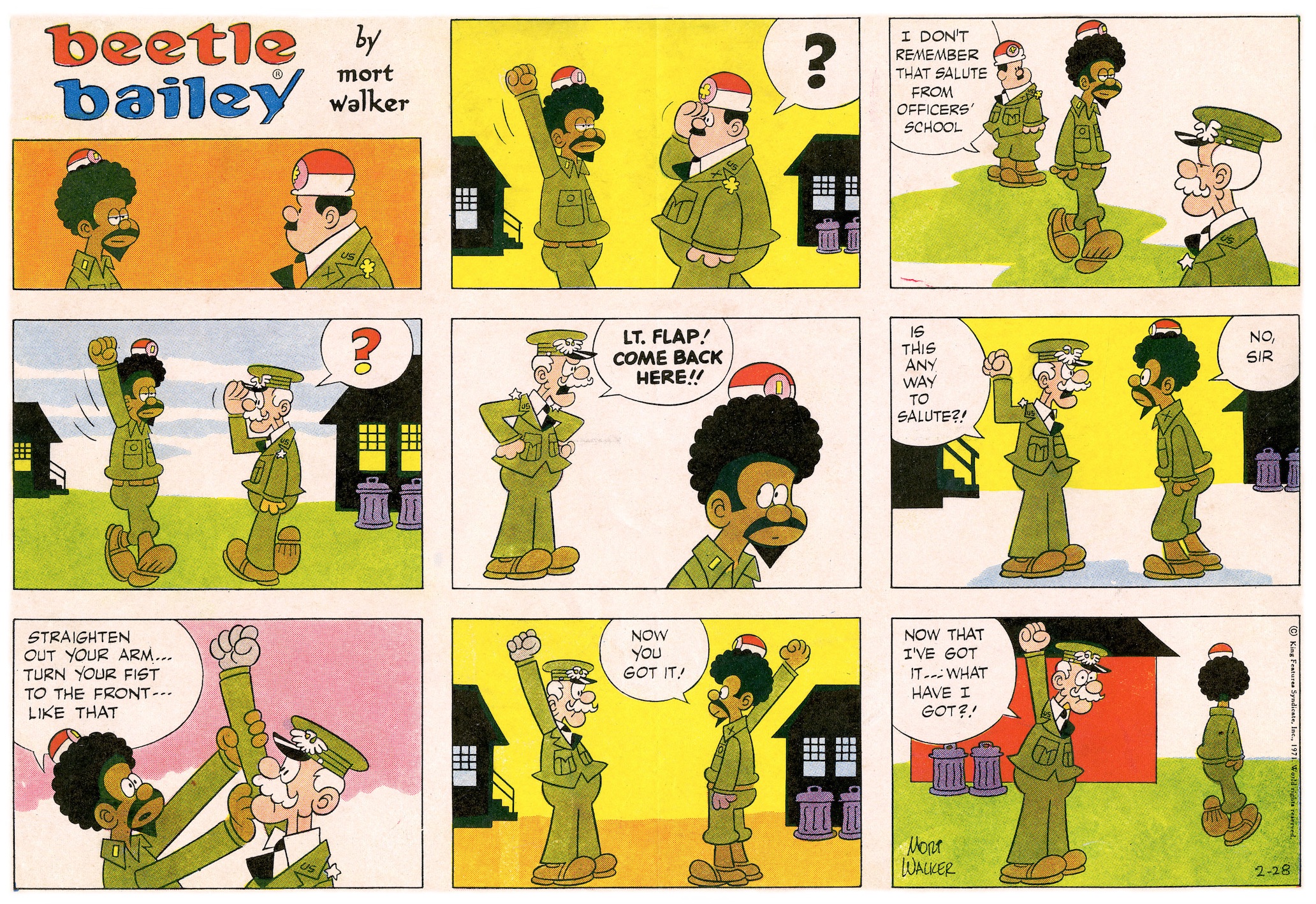 In The Best of Beetle Bailey, Mort Walker recounted the origin of Lt. Flap. “Many people had urged me for years to put a black character in the strip. The trouble was, if I made him a lazy goof-off like the regular cast I’d get complaints. Finally I thought of creating a macho type who liked wild clothes and Lt. Flap was born.” Walt “Clyde” Frazier of the New York Knicks basketball team has often by cited as a source of inspiration.

The strip below is his first appearance.

“There was an initial fuss from people who either thought I was propagandizing or ridiculing black people,” Mort continued. “The Stars and Stripes banned me again and Senator Proxmire had to convince them to reinstate me.”

The episode at the top appeared four months later and is the first color Sunday page starring Lt. Flap. The black power salute was used as a sign of protest by two athletes during the 1968 Summer Olympics in Mexico. General Halftrack obviously had a lot to learn about his new lieutenant.

Mort concluded in the 1984 interview, “Now the flurry has died down and Lt. Flap is a favorite with many.” He is still a regular member of the cast.

The Timeline series will continue next week with another classic strip from 1971, so stay tooned.