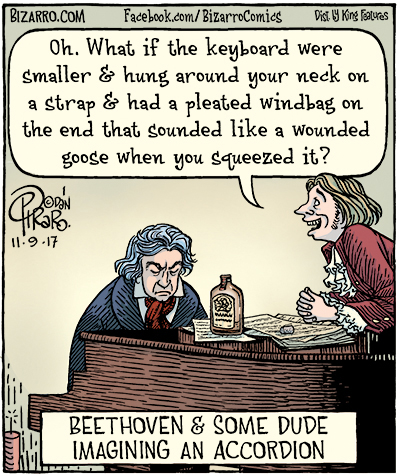 In yesterday’s post of the previous week’s cartoons, the above comic was accidentally omitted. I did everything the same way I always do and grabbed my entire week’s worth of cartoons en masse for uploading, yet this one somehow didn’t make it to the other side. I didn’t notice it was missing until one of my cherished Jazz Pickles asked about it in a comment today. Thanks, E. A. J.!

I’m not one to jump to conclusions without evidence, but I strongly suspect the Russians are behind this. I can’t think of a political reason for them to alter my blog post but perhaps Putin just really loves accordions and has ordered his throng of hackers to thwart any unflattering mention of them. I mean, he loves Trump and he’s far more annoying than an accordion, so it isn’t beyond reason.

Regardless, I will say of this cartoon the same thing I said on my various social media sites last week: Accordions are like voting booths––in the wrong hands they can be lethal.

I don’t just always hate accordions. I’ve enjoyed them in certain hands; a band called The Tiger Lillies does it well, as do some of those French guys that play that sort of moody music that makes you want to smoke Gauloises and drink cognac. But in general, they have a sound that can grate on one’s nerves, especially when playing music that veers toward polka. Here in Mexico, I hear it almost daily in the form called “Tejano” or “Norteño” music, which is a direct descendant of polka music played by German immigrants of long ago. I like it in small doses but small is not the size of dose one gets in my neighborhood.

People often ask me if Mexico has directly influenced my cartoons since I moved here almost a year ago and this would be one prime example.