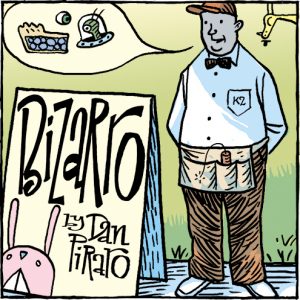 (Embiggenate your experience by clicking a cartoon.) 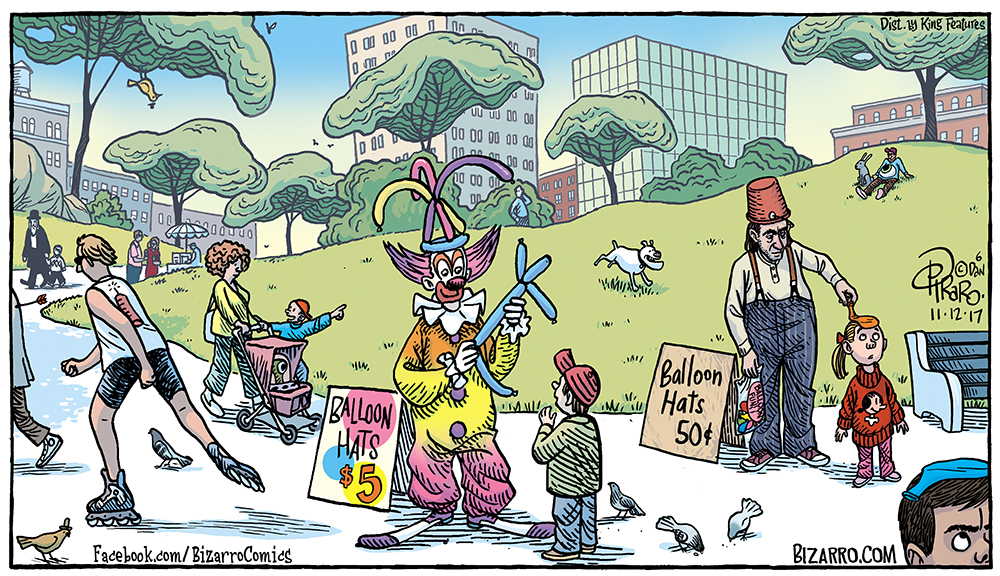 Bizarro is brought to you today by Smart Hat.

When I was growing up in the late 1900s, my parents didn’t believe in spending the extra money to get the name-brand fashion trends my sisters and I needed if we hoped to have any social traction at school. This taught us important lessons such as: Kids in Levis® and Dingo® boots are not always kind to kids in Montgomery Ward jeans and “Dango” boots from Larry’s shoe barn. In the cartoon above, it’s no mystery which style of balloon hat I would have been wearing around the park. 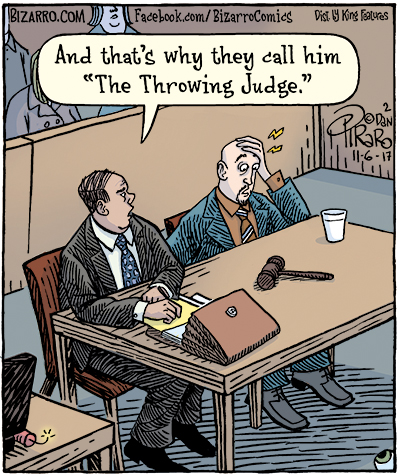 We’ve come to take gavels in courtrooms for granted but as I was drawing this cartoon, I began to wonder about the history behind it. One could argue that a courtroom is perhaps the one social situation in which it is essential that even the most unruly of persons needs to summon the self-discipline to behave in a civilized manner. If you say or do the wrong thing, you could literally get your ass thrown in jail just for not following the rules of the room. And yet, for gavels to have become standard tools of the trade there must have been enough times that a courtroom got crazy enough that judges needed to bang a hammer on a table to get people’s attention and settle them down. I think this is a testament to the fact that for all our high and mighty opinions of ourselves, when things aren’t going our way we’re little better than a pack of coyotes.

On the positive side, I’m happy that courts have kept the traditional method of calling order to the room instead of using more modern technology like an air horn or a Supersoaker. 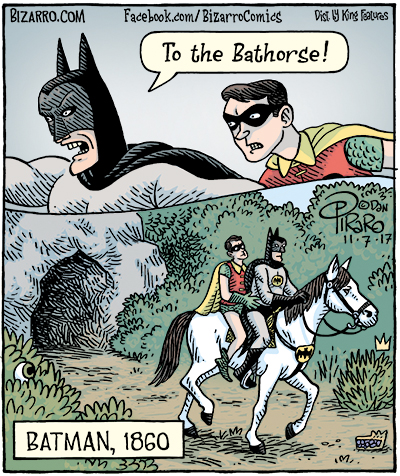 I’ll admit this Batman joke may not be the cleverest cartoon I have ever published. But something about a couple of Civil War-era crime fighters trotting out of their secret hideaway cave on a horse amused me so here we are. Also, the word “bathorse” is funny because your brain wants to pronounce the “th” like a “th,” but that would make it an “orse” you use in the bath. 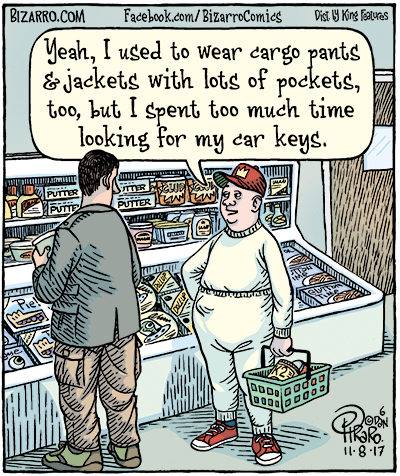 I’m the kind of guy who does not carry a purse, so I like a lot of pockets. The downside of a multi-pocketed ensemble, however, is that I find myself constantly searching for various accoutrements like my keys, wallet, cell phone, handkerchief, lip balm, back scratcher, piñata bat, linoleum knife, surgical adhesive, etc. The creepy man in the cartoon above has found a solution for his own dilemma, but I carry far more things than does he so I must keep searching.

On a side note, I tried carrying a purse for a couple of years but I kept leaving it places. I got tired of having to replace my I.D. and cell phone and was spending a fortune on surgical adhesive so I gave it up. 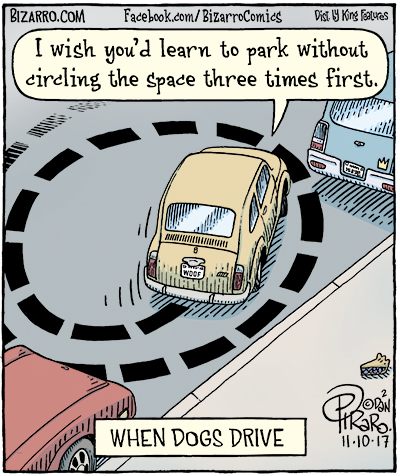 I’ve always been an avid dog lover and have taught several to drive. The worst driver among them was a rescued pit bull who was too emotionally sensitive to deal with drivers who were a bit aggressive. If she got cut off in traffic, she would whimper and climb into the back seat, forcing me to grab the wheel to avoid an accident. Virtually all of the dogs I’ve driven with have the problem of circling several times before parking and some stop regularly to sniff the tailpipes of other cars, which can be frustrating if you’re in a hurry. I’ve since given up letting my dogs drive.

I tried for a while to teach my cats to drive but they are utterly uninterested in it unless you can convince them that driving is the one thing you absolutely do not want them to do.

If you’re one of those people who buy gifts and/or support the arts, please consider some of these fine products:

Bizarro greeting cards, T-shirts and stuff from my store, archival color prints of any Bizarro cartoon from this website ($25 and  up), my adult coloring book with the most elaborate and cool art of any coloring book on the market ($6!), super nice color prints of some of my favorite Bizarro cartoons from an L.A. art gallery (larger, limited edition, signed and numbered prints which is why they are more expensive than the ones through this site.) 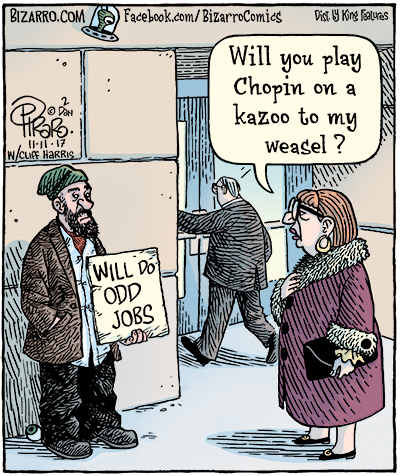 This cartoon was a collaboration with my good friend, Cliff Harris The King Of Wordplay. Almost everyone attempts puns and wordplay but it is my experience that very few people can come up with ones that are truly surprising and therefore laugh-inducing. Cliff is a master. Here are a couple of my faves of Cliff’s from over the years…Chinese Restaurant and Pick Up Line. Cliff wrote a very fun book of dirty wordplay which would make a lovely gift and which you can buy on Amazon if you have money left over after buying some of my stuff.

Here’s a fun, last thing: Some of my favorite family members came down to Mexico for Day of the Dead this year. We all decked out and haunted the streets of our town in grand fashion, along with thousands of other folks in what is a city-wide party that lasts for days. MUCH fun was had. From left to right: Me, Krelspeth, Cornelius Red, Krapuzar, Olive Oyl. (Amazing Photo by Krapuzar’s husband, Don Gooch.) 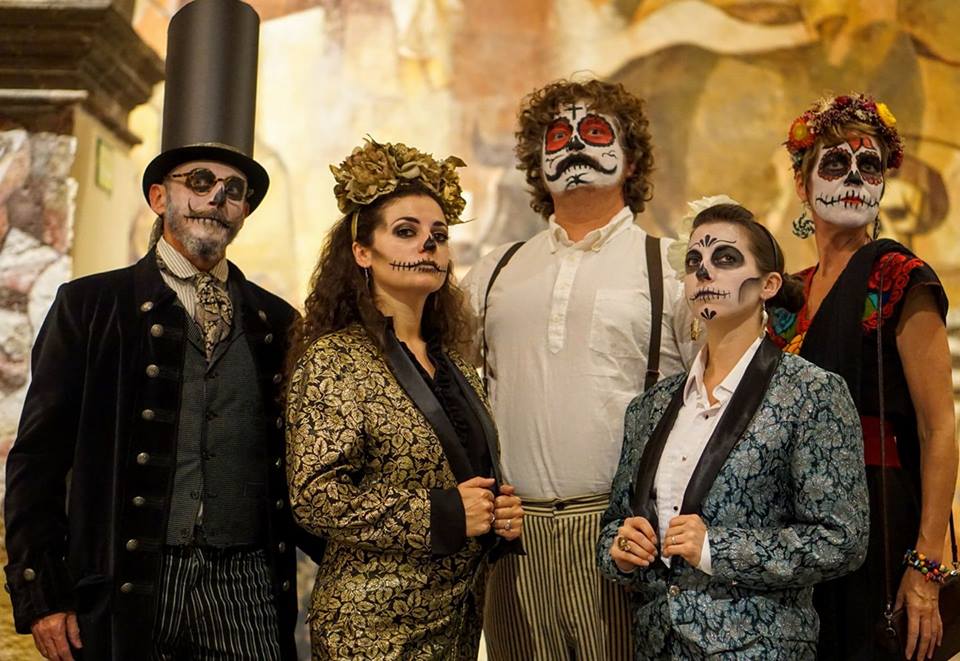