(To embiggenate the cartoon below, strike it solidly in the middle with your cursor.) 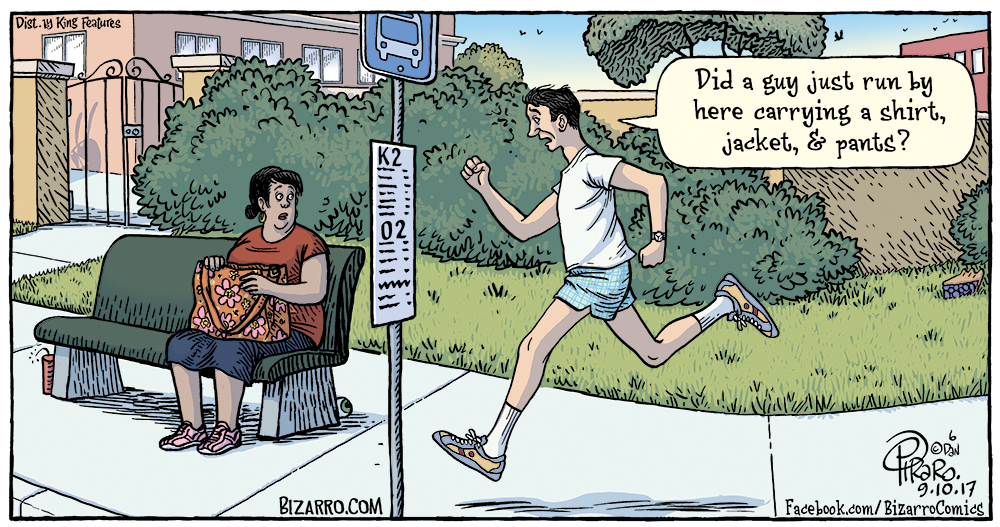 Bizarro is brought to you today by Running Apparel.

If you are a person with at least one eye that works in the usual fashion and you have the average amount of observational skills, you may notice the difference between the cartoon I’ve posted above and the one that appeared in your local newspaper’s funnies today or at the top center spot on today’s Bizarro.com homepage. The one in newspapers and on Bizarro.com’s homepage is the one I submitted for publication four weeks ago––the one in this blog is one I took from my computer and posted here moments before I typed this sentence. Sometimes when I look at a cartoon four weeks later as I prepare to post it, I see a way to improve the gag in some small way and so I change it. That’s the reason for today’s change. I think this version sells the gag a little better than the original one. (I’ll tell you the difference at the end of this blog post in case you can’t spot it.)*

For decades I’ve thought that certain jogging apparel looks a bit like underwear and I’ve amused myself by imagining the jogger is chasing the person who stole their clothes. That occasional fantasy was the simple genesis of this gag.

Once, however, when I lived in Brooklyn, I saw a heavy-set woman of about 40 jogging down the street between the parked cars and traffic around lunchtime actually in her underwear. She was wearing a large, longline, white bra, a mid-thigh-length, pink slip, pantyhose, and running shoes. My guess was she was in the habit of jogging during her lunch hour at work, had forgotten her jogging outfit and just figured “what’s the difference?” Or, perhaps she jogged that way every day because, in truth, what is the difference?

I’ve also long thought it was funny how most of us will appear in public in swimwear but would be mortified to be seen in public in our undies, in spite of the fact that they often cover more of us than the swimwear. It’s more about context and looking out of place than it is about modesty. 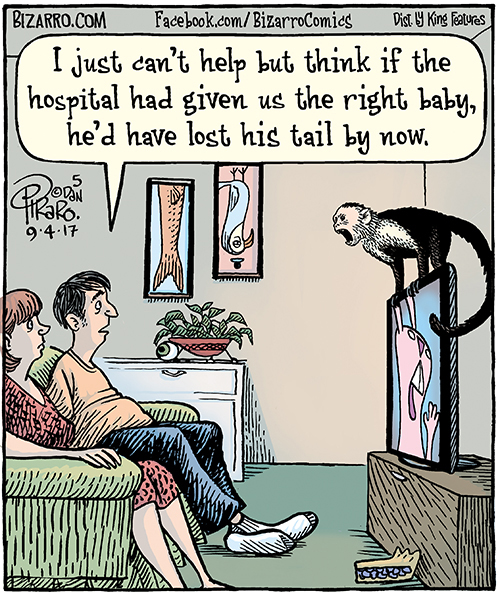 Based on social media activity this week, most people seem to enjoy the ridiculous nature of the above cartoon but a few folks left comments about not understanding it. I’ve always had trouble relating to people who don’t understand absurdist humor. How someone can tolerate this utterly surreal existence we humans have built for ourselves without a sense of humor about the absurdity of it all is beyond me. Most days, it’s the only thing that keeps me from jumping off a cliff. 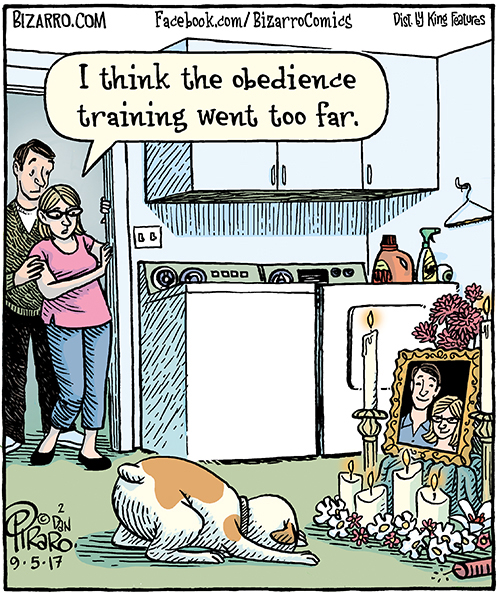 This cartoon is something of an illustrated history of human religion. This dog worships the entities who are responsible for his food and shelter in the same way that early humans assumed that the good and bad that happened to them was the result of some bigger, more powerful being(s). Long after our species has proven where things like weather, earthquakes, volcanic eruptions, famine, floods, and diseases actually come from, most of us humans still worship imaginary entities in an effort to keep our luck falling on the “good” side.

This is also a big part of what’s fun about having a dog; you get a taste of what it is to be a god. They worship and fear you and you control their lives. With my dogs, I perpetuate this idea by dressing as Zeus and threatening them with a large, cardboard lightning bolt. 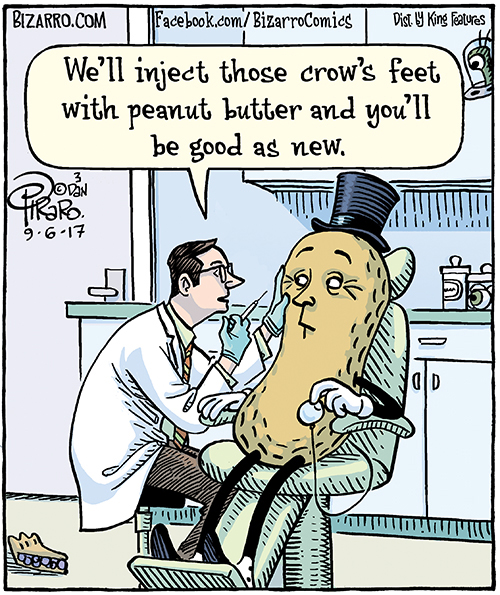 Wouldn’t it be nice if combating the ravages of old age was as simple as injecting peanut butter into your wrinkles? People with peanut allergies could use cream cheese. 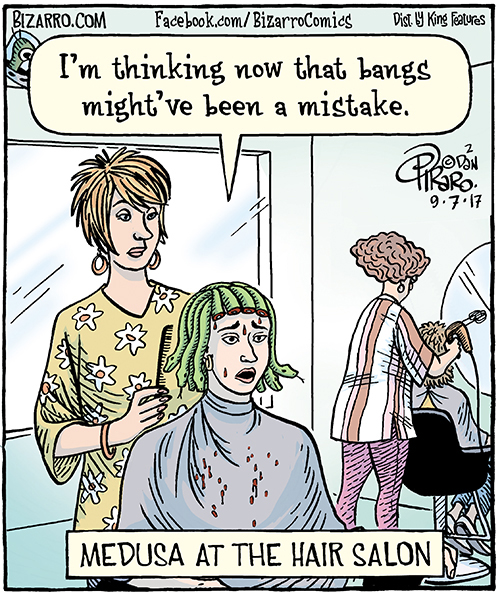 I’ve been on a Medusa kick lately. Not sure why. I’ve done a few about her over the years but my favorite one (below) was never published in Bizarro. It appears in a book of mine and was published in Scandinavia years ago but it is too racy for American newspapers. We can elect a narcissistic, racist, adolescent maniac to the most powerful office in the world but to publish a drawing of a butt in the funny pages might cause western civilization to collapse. Makes perfect sense. Laugh at it or jump off a cliff, I suppose. 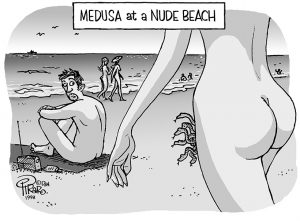 My feelings would be a lot less hurt if you’d drop by my store and check out the new shirts, totes, mugs, and stuff that I’m selling. There are various designs, styles, colors, etc.. so dig around. Below are some pics of a few of the offerings. There are two pages, so don’t miss the other one. 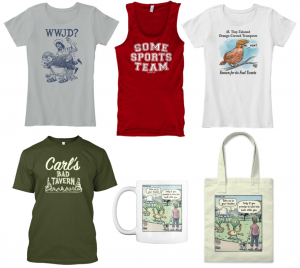 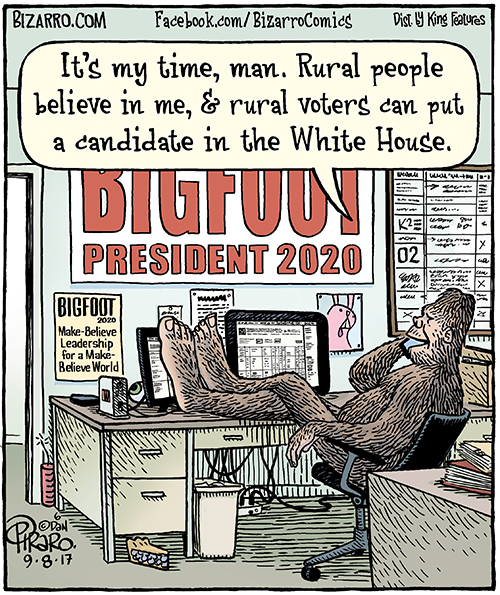 If I may be immodest briefly, I’m pretty happy with this Bigfoot for president cartoon. With America’s current embarrassingly ludicrous choice of a childish, lying, con-man, TV gameshow host, carnival barker, how far behind can an imaginary redneck icon like Sasquatch be? I guarantee he’d do a lot less harm than the Cheeto Mussolini.

Speaking of shirts, I’m working on a campaign poster T-shirt for Bigfoot. (Based on this idea but not this cartoon on the shirt.) Sign up to receive an email each time I post on this blog (right now, right margin, under the FEED THE BUNNY logo) and you’ll know when I’ve added it to the store. Or “follow” my Bizarro FB page here.

I’m trying to decide if his campaign slogan should be “Make-Believe Leadership for a Make-Believe World” or “From Tiny Hands to Giant Feet”. Let me know which you like best. 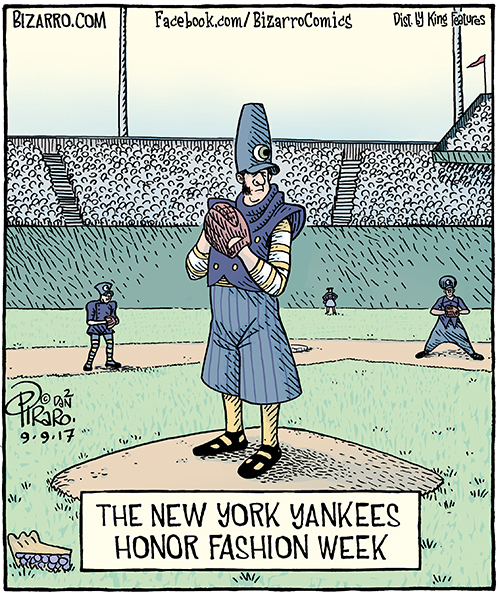 In case you’re not aware, “Fashion Week” is actually a thing in New York City. Once a year, gobs of models and designers and buyers and fashion industry folks descend on NYC for a week of runway shows and all that. I don’t know what time of year they do it now, but in 2001 it was happening the week that the planes hit the World Trade Center on 9/11. According to someone I used to know in that business, a number of the models at one show believed Fashion Week was the target of those attacks. You see, to be a model you have to be pretty. Nobody asks your I.Q. and you mostly don’t need one.

That’s it for this week, Jazz Pickles. Until next time, be smart, be happy, be nice.

*THE ANSWER TO THE DIFFERENCE MENTIONED IN THE FIRST PARAGRAPH IS the runner’s shoes. I originally thought dress shoes were better for the gag but now think that running shoes make it less obvious until you’ve read what the man is saying. Delayed punch lines are always the best, I think.