(Your wish to embiggenate the cartoon below can be achieved by clicking the Northern White Cedar tree.) 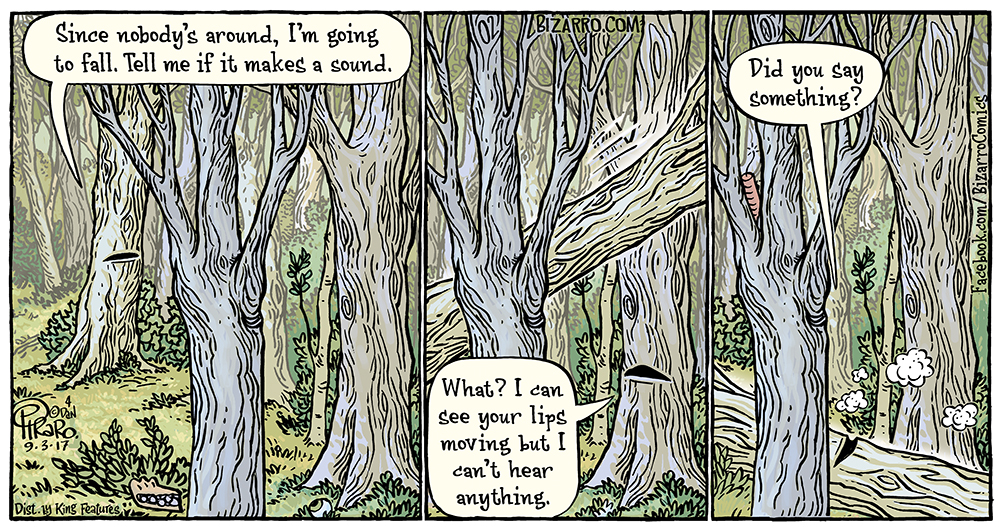 Bizarro is brought to you today by Sexy Trees.

There have been many variations of the ancient philosophical question, “If a tree falls in the forest and there’s no one there to hear it, does it make a sound?” This is, of course, an extremely anthropocentric question which ignores all of the other non-human ears in the forest, but that’s an issue for another forum.

For those of us interested in the scientific aspect of falling tree noise, I recently read a fascinating report by a group of scientists from the Ivy League School of Technology and Wishful Thinking who have devised a way to communicate with Wood Beetles, many of whom have heard trees fall in the forest when no humans were around. The beetles reported that trees do NOT make a sound. Well, that’s not entirely true. They said they sort of go “oof!” when they hit the ground but that’s to be expected. Beyond that, nothing. More importantly…

HAVE YOU EVER WANTED A REALLY FUN T-SHIRT OR OTHER PRODUCT OF SOME SORT? If the answer is yes, you’re going to want to hop over to my BRAND NEW BIZARRO SHOP, which we at Rancho Bizarro have been slaving to put together for weeks now!

It just went live, moments before I typed this sentence, so race over there and be one of the first people to purchase something and enjoy the silent, almost undetectable pride that comes with that knowledge!

I will be adding lots of new products as the weeks and months go by, including some of the earlier Bizarro shirts I did a few years ago, so check back here and on my FB page and my Twitter feed, of course. Some of these designs are from shirts worn by characters in my cartoons like the famous “Carl’s Bad Tavern” shirt and the incredibly popular “Some Sports Team” shirt. I’ve added a few more variations of the sport shirt, so be sure to check them all carefully before ordering. AND, there’s more than one page of products so don’t just get stuck on page one. If you sign up for emails from me, you’ll be sure not to miss new products. See blue box above. 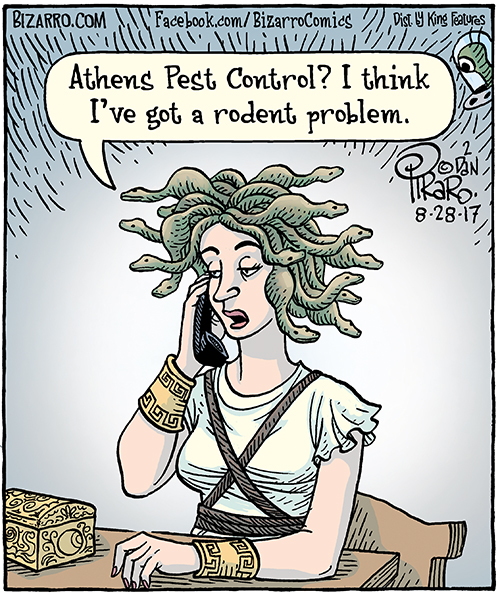 I love it when readers “correct” me in their comments on social media. I got several people this week who told me, “snakes are not rodents”. I responded by telling them that I knew that, but the lumps in the snakes are rodents. I don’t mean to be a dick about it. It’s perfectly fine to misinterpret a cartoon drawing. But I still found the corrections funny. 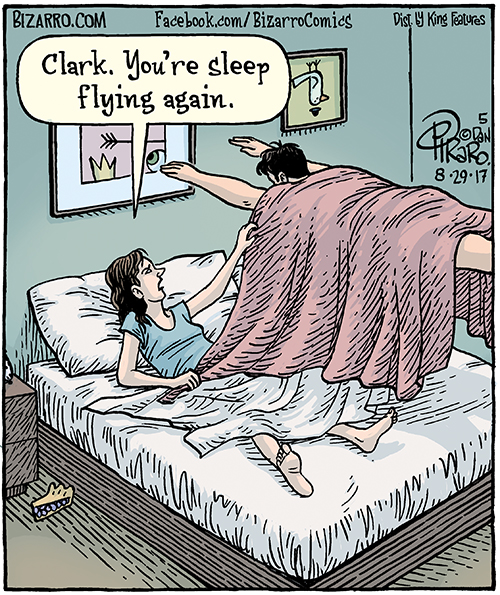 I mentioned last week that one of my cartoons got many times more “likes” on my Instagram page than any other I’ve ever posted and this was the one. Lots of people made jokes about erections, so maybe that was why it went viral. I guess people just love to imagine super boners. For the record, I had no such thing in mind when I drew it. 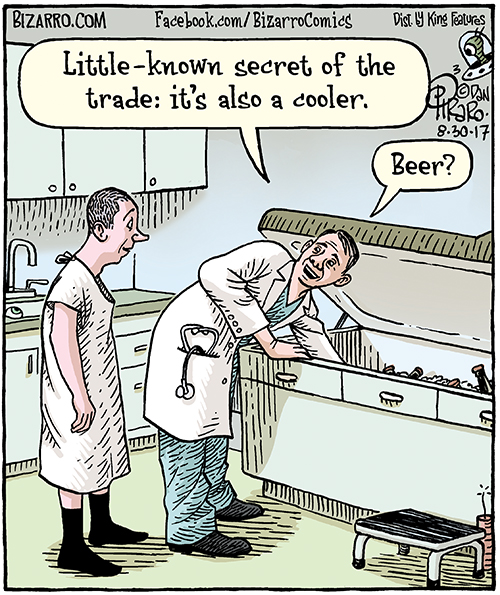 This would be particularly handy for the kind of doctors who ask for urine samples. 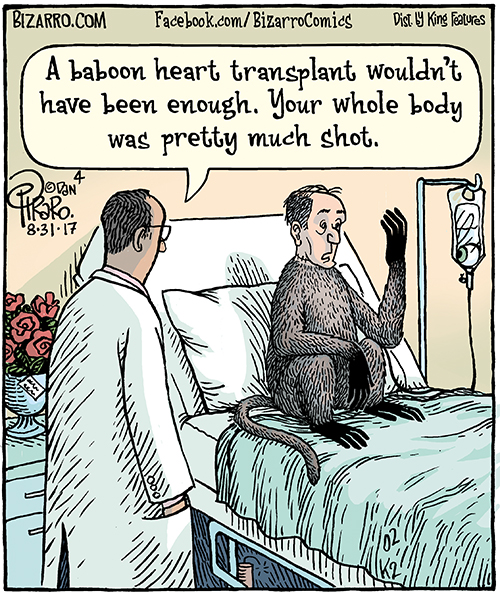 When I posted this on Instagram this week, I added this comment: “Might not be so bad as long as it’s not the kind with the giant, blue butt.” To which someone replied, “What??! That’d be the only reason to be somewhat OK with it!”  I laughed at that. 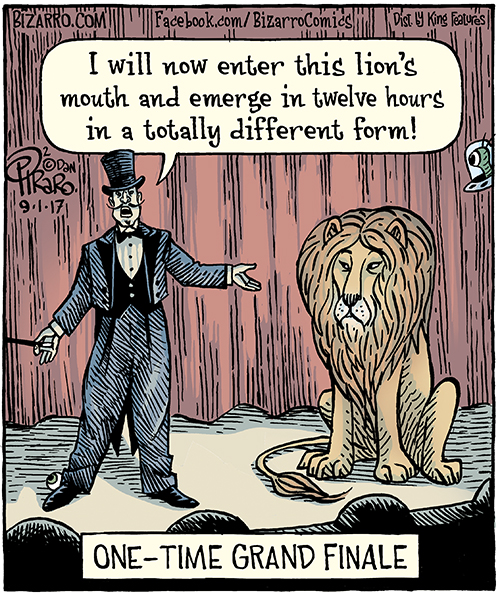 There’s a funny story behind this magician/lion cartoon. I first wrote and drew it for an underground humor magazine in Dallas back around 1990 called The Wahoo Reader. Since it references defecation, it was considered too racy for newspaper comics pages so I couldn’t use it in Bizarro. It crossed my mind again a few weeks ago and I thought, Ah!  Newspaper comics pages are more liberal than they used to be so I can use it now! and I redrew it and submitted it for publication. The day it published, a reader sent me a link to a different version of this same cartoon that I published back in 2003. I have no memory of it but I’ve published over 11,000 cartoons since Bizarro’s debut in January of 1985, so I’m allowed to forget. 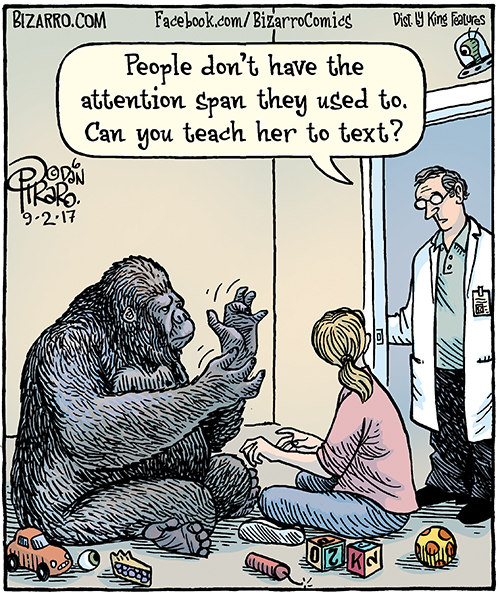 I meant for this to be Koko, the first gorilla to become famous for learning American Sign Language, to my knowledge, anyway. A reader commented this week that they liked to imagine the doctor is talking to the gorilla, not the woman. That made me chuckle, too.

That’s it for this week. I encourage you to have a look at my new store and tell me what you think.  Until next time, thanks for reading, be happy, be smart, be nice.