(Embiggenation curious? Click these images and wonder no more.)

Bizarro is brought to you today by Grassfed Transportation.

Cartoons can be a lot of things: funny, weird, poignant, sad, educational, inspirational, editorial or a few other things I can’t think of right now. Readers who like “funny” often complain to me about those cartoons of mine that verge off into one of these other areas and I don’t blame them. Funny is always more fun than not funny. No surprise there.

But I’m an artist, not a marketing major. I am driven by my creative inspirations more than commercial considerations. (That’s just one of the myriad reasons I’m not rich.) I was pleased when I thought of applying this familiar metaphor to the Cheeto Mussolini’s policies toward climate change, even though it isn’t a knee-slapper.

We think of stories like The Three Little Pigs as being for children, but there is great wisdom in them for adults, too. In fact, many so-called children’s stories and rhymes may have been written as code for political situations to avoid prosecution by overbearing governments. It is said that Humpty Dumpty was written as a way commoners could make fun of King Richard III without fear of disappearing from the planet in a creatively painful way. For the time being, Americans have the somewhat rare luxury of being allow to publish cartoons depicting the Orange Menace as an ignorant pig without fear of mysteriously disappearing. For the time being.

Please read the words in the following gold box, then sign up for my email. I won’t bug you much and I’ll never sell your addy. 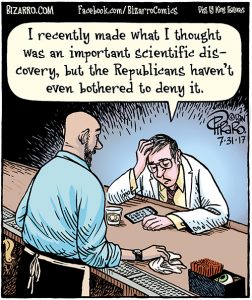 Since this cartoon about the forlorn scientist published in newspapers worldwide last Monday, I’ve gotten numerous congratulations and reprint requests from scientists who regularly deal with politicians who want to deny science in order to score short-term profits, which is what climate change denial is all about as most people know. (If you still believe it is a “Chinese hoax” or some conspiracy by liberals, please leave now and go read a website for stupid people. I hear there’s a Nigerian prince who want to make you rich.)

There was heated and lengthy debate on my FB page over who is more prone to denying science––liberals or conservatives. Conservatives are the most famous for it with their attempts to get creationism into public school science text books, their rollback of climate change protections, their assertion that non-heterosexuality is a choice as opposed to a genetic disposition, etc. But liberals get accused of promoting anti-vaccine theories, GMO crop fears, and hippy-dippy things like alternative medicine/psychics/astrology, etc.

In the end, though, as a species we humans are naturally superstitious and prone to believe all manner of made-up stuff, regardless of our political leanings. I recently saw a study that showed that an equal percentage of people on both sides of the aisle are prone to anti-science positions like the ones listed above. But it seems to me that the big difference is that Republicans try to actually legislate these anti-fact notions far more than Democrats do. 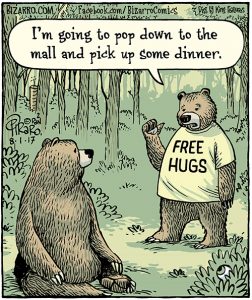 I got this idea from the famous Interweb videos of people in public places holding signs that say “free hugs”. I admit these videos are kind of moving (mostly because of the way they’re edited) and I certainly applaud people who want to spread love instead of hatred and fear, but I’m also sort of naturally squeamish about close, physical contact with strangers. In the same way that I would be creeped out by having sexual relations with a prostitute, I would not hug a stranger on the street who’d been hugging dozens of other random strangers all day. Not condoning my inclinations here, just owning them. 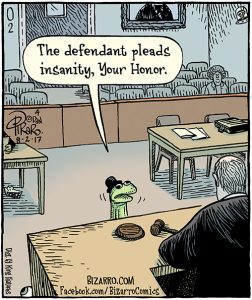 Lots of people did not understand this courtroom cartoon. Do you? SPOILER ALERT: I’m about to explain it in the next sentence. The defendant is using a sock puppet as his attorney, which is either an intentional attempt to bolster a phony claim of insanity, or is inadvertently demonstrating it. 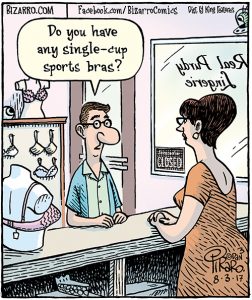 Also widely misunderstood, was this scene taking place in the Real Purdy Lingerie store. The deal here is that sports bras are made to keep women’s floppy bits from bouncing around during physical activity and this guy’s nose is the size and shape of a female breast. No, it isn’t brilliant, but it seemed amusing when I wrote it. Perhaps some of the confusion is rooted in the fact that most cartoonists draw all their characters with giant, bulbous noses so the incongruous giant nose in this cartoon was not noticed.

On a different topic: Lots of women pointed out on my FB page that sports bras actually do only have one (long) cup, hence the dreaded “uni-boob” effect. That’s a whole other can of worms that I’m not qualified to comment on at this time. 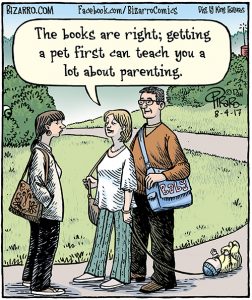 I’m happy to say that this parenting cartoon got a lot of positive play on social media. And, as I predicted when I drew it, it also attracted one complaint about it promoting child abuse. I told the complainticator the same thing I always do in these cases: If someone sees this absurd drawing and decides to drag their own baby around by the neck, that baby was doomed long before I published this cartoon. 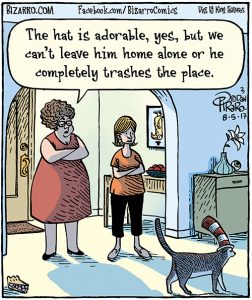 Dr. Seuss books were by far my favorites when I was growing up and I read The Cat in the Hat dozens of times as a child and a few hundred more times to my own crotch fruit when they were young. I thought this cartoon was a fun, surreal tribute to that iconic story.

Thanks for reading this far, Jazz Pickles. I greatly appreciate your willingness to look at my silly drawings and read my ranty words. Until next time, be smart, be happy, be nice.