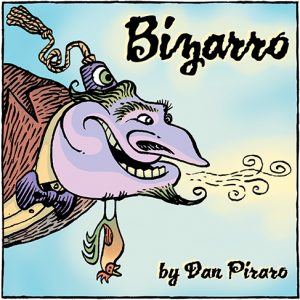 (To embiggenate any image, use modern technology to click on it.) 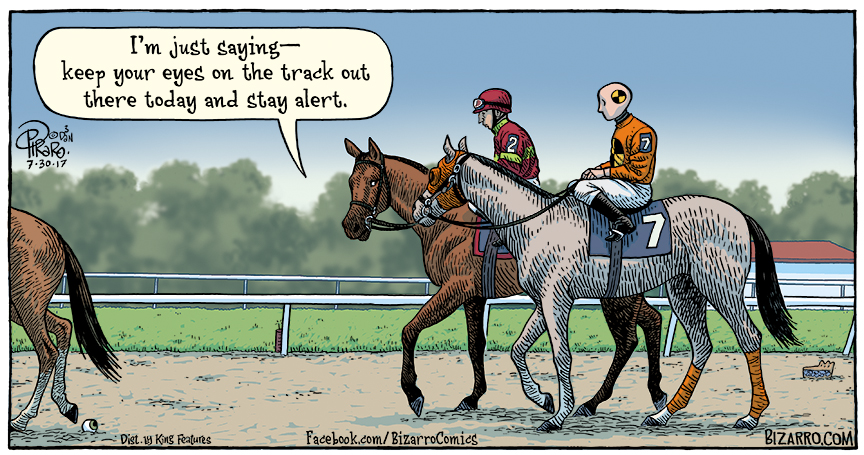 Bizarro is brought to you today by Knowing Who’s Driving.

The year was 1604 and the Viceroy of Klobsovelkä, Finland was spotted having a meeting with Russians in a teahouse just over the Finnish/Russo border in a town whose name cannot be typed with an English keyboard. The majority of Klobsovelkiäns already did not like or trust their Viceroy and the revelation that he may be colluding with their enemies made him even less popular. He had, in fact, lost the popular vote but was installed in office by means of a little-understood and archaic system of vote counting that was set up in the 1200s to help balance the power between educated people in the towns and villages, and the mostly too-cold-to-think-straight snowbillies who lived in the hinterlands and subsisted on a diet of snowballs shaped like vegetables, frozen sticks, and vodka.

Most of the town-dwelling Klobsovelkiäns were ready to toss the Viceroy out of office but many were hesitant because power would then go to his Vice Viceroy, whom many thought to be an even more bumbling boob than the Viceroy.  The Vice Viceroy was also a devout Saälmvradranskæn and, as such, believed that people who engaged in sexual congress more than once annually, or without blindfolds and heavy woolen mittens, were instruments of Hiisi, a malevolent and hideous creature they believed dwelled in forest caves. The people of Klobsovelkä were in a tough spot between an untrustworthy lout and an idiot.

The subsequent months were very tense for the Klobsovelkiäns as they launched an official investigation into what the Viceroy was discussing at that meeting over the border. The definitive answer came the following summer, though most of the residents never knew it. While they slept one balmy, nearly-above-freezing August night in 1605, the Russian army dug up the entire town of Klobsovelkä and threw it into the Baltic Sea to be used as landfill in a spot where they intended to build an airfield should planes ever be invented.

The only survivors were the Viceroy, his family, and a few hundred snowbillies who lived outside the town. Most of the snowbillies also perished soon after when they went into town to buy condiments for their snowballs and fell into the big hole that was left by the Viceroy’s sale of Klobsovelkä to the Russians.

The moral of this story, and the racehorse cartoon above, is that you’d better be damn sure you can trust who’s driving or you might crash straight into a wall. Or be thrown into the ocean or fall into a hole, I guess. 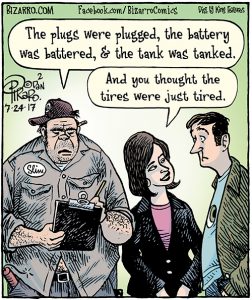 Sometimes puns are fun but when they are too easy, as these are, I sometimes put a handful together in one cartoon to give you, the reader, more to chew on. I find it is also a fun way for folks to chime in with puns of their own in the comments section. If you have an auto-related pun you’ve been dying to unleash on the public, now’s the time. 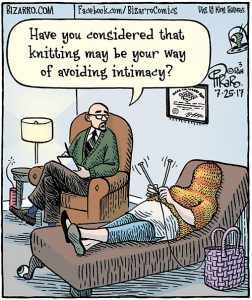 Plenty of people have already told me that the character in this cartoon is holding her knitting needles wrong, so no need to repeat that in the comments section. Now watch a few people tell me the exact same thing in the comments section because they don’t actually read the stuff I write between the cartoons on this blog, they just skim the cartoons. That’s why I pack in loads of fascinating historical information like that story above; to reward the “real” readers. 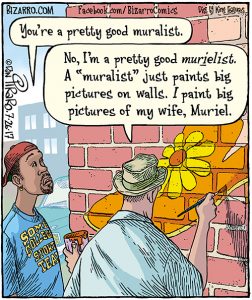 I grew up in Oklahoma, which, for my foreign readers who are not intimately aware of where specific states are in the U.S., is just above Alabama and below Arkansas on a list of worst states for education for under-privileged kids, which puts it at 42nd out of 50. In such a place, one often hears people say “muriel” instead of “mural,” “liberry” instead of “library,” and “Trump is the best president we’ve had since Hulk Hogan”. True story. 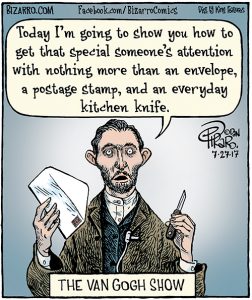 Vincent Van Gogh was a complete financial failure as an artist because he only sold one painting in his lifetime. He was poor and underfed and became mentally unstable. Legend has it he cut off part of his ear and mailed it to a woman he was in love with. That aside, I posted this cartoon on social media with this comment: “How people announced their mental disturbances to the world before Twitter.” Some people got mad at me and told me to stop attacking Trump. Go figure.

Frogs are endangered these days, as are bees and a climate we can survive in, so I say let’s stop doing the stupid shit we’ve been doing like poisoning frogs and bees and electing people who think science is make-believe.

Also, statistics show that more than half of all marriages to royalty have ended in being killed by an angry mob of peasants or photographers. When will we learn? (Answer: Never)

I got plenty of corrections on this cartoon, too. According to some, the canals in Venice are too deep to push a pole against the bottom so those sticks are actually very long oars that they sort of waggle and row. I argued that “born to row” isn’t a very compelling slogan for a leather motorcycle vest, although “born to waggle an oar” would most certainly have worked. If you’re tempted to add a comment to today’s blog saying you imagine the front of his shirt saying “If you can read this, the bitch fell out,” save your effort because that has already been suggested by numerous commenters on FB. Of course, somebody who skims the cartoons here and doesn’t read the copy with do exactly that. Just watch.

Thanks for reading this far, Jazz Pickles. I cherish our friendship and hope you’ve enjoyed this week’s graphic nonsense. Till next time, be happy, be smart, be nice.