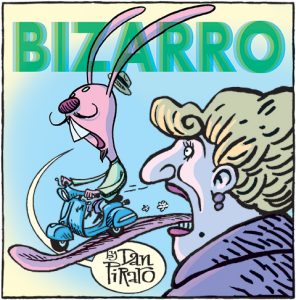 (To fulfill your desires of embiggenation, click any object made of fabric in any image.) 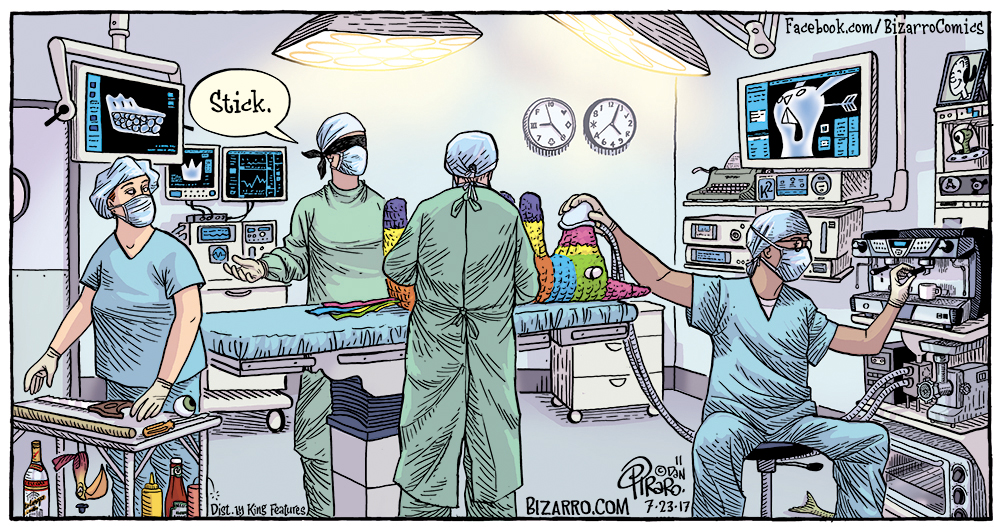 Bizarro is brought to you today by Big Bizarro-Head Barbie.

A while back I had a couple of ideas about piñatas visiting human doctors. This one is the visually more complex of the two, which is why I used it as a Sunday and the other as a weekday cartoon.  This also has some nice background gags plus ELEVEN secret symbols that you’ll see better if you embiggenate it. I hope I counted right this time.

By the way, I’m about to open a new store page with some new T-shirts, enamel pins, maybe hats and pillows and shower curtains, who knows? If you drop your email into that box in the right margin, you’ll get an email each time I post something on this blog. It will only be once a week, occasionally two, and I’ll never share your address with anyone.

(For cartoons and photos from my “real” life, follow me on Instagram…@danpiraro) 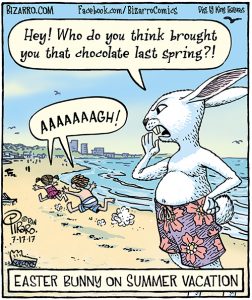 When I was a kid I was afraid of people in big animal or character costumes and I believe to this day that is the appropriate response. Why people insist on trying to create childhood fantasies in the real world with costumes is beyond my understanding. Hanging around shopping malls dressed as the Easter Bunny or Santa Claus is like milling around in a church lobby after services dressed as Jesus; these kinds of fantasies work best in the imagination. I think it sort of fits into the category of books always being better than movies. 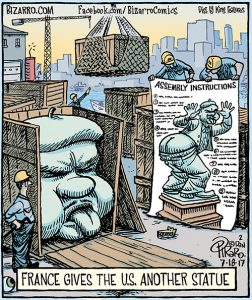 This cartoon about France got a lot of play on the Interwebs. Predictably, right wing types began insulting France with all that cliche WWII crap about them surrendering to the Nazis, etc., and others argued back with the complete historical reasons why they had no choice (partly because it took America SO long to enter the war) but how the French underground continued to fight under even more dangerous conditions and were invaluable in the eventual victory. It will likely happen again in the comments section of this post. Yawn.

There was a time when the U.S. had moral superiority over many other countries but that’s gone and forgotten now with Trump. America would be a laughing stock if this feckless brat wasn’t so dangerous and the prognosis so tragic. France, on the other hand, avoiding the wave of misguided desires for authoritarian daddy figures that has swept the U.S. and much of Europe, managed to elect someone with reasonable views. With a single election, they’ve shown both the U.S. and Britain what grownups look like in the face of challenging times. In this case, the U.S. has surrendered to fear-based politics while the French are moving forward. 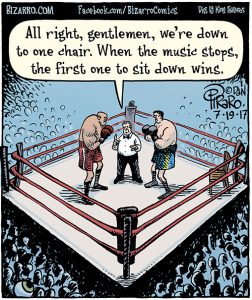 Do kids play “musical chairs” anymore? When I was a kid in the mid-1900s, the Internet had not been invented yet and TV only had three channels and none of them were for children, so we had to amuse ourselves with ridiculous activities like having 8 children walk around 7 chairs while music played and when it stopped, everyone fought for a chair to sit in and the one who didn’t get one got to feel like a loser for the rest of his/her life. After each round, a chair was removed, the music started again, and the next loser was chosen. Finally, after much hard work and anxiety, a single child would “win” and be declared the person able to sit down the fastest. Later in life, they were called “couch potatoes”. 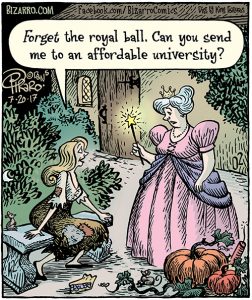 The giant step backwards that women’s rights (and everyone other than white, Christian, heterosexual male’s rights) have taken since the Cheeto Mussolini took office has been on my mind a lot lately. This cartoon is half about that and half about the uneven playing field that higher education is played on. If your parents are wealthy, you get everything you need to build a decent life along with an entire news network dedicated to convincing uneducated low-income and middle class folks that what’s best for the wealthy and giant corporations is best for them, too. Having rich parents in America also gets you the opportunity to be treated by doctors when you’re sick and get an education that might lead to something other than a job at a fast food restaurant. If you’re among the other 90% of Americans, you probably won’t get all of that, but you will get the privilege of being called lazy by the very people Fox News convinced you were on your side. Ouch. 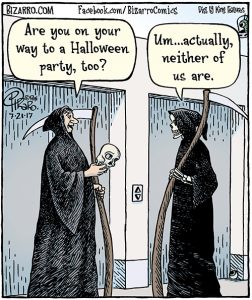 I’m happy to say that this Grim Reaper cartoon got a lot of compliments this week. It also got a lot of people sending me messages, comments, and emails about how the line should correctly be, “…neither of us is.” I hastened to remind them that when one is writing dialogue for a fictional character it is correct to use vernacular and there is not requirement for grammatical correctness. Think Huckleberry Finn. What I did not remind them of is how boorish it is to correct the grammar of others if you’re not their English teacher, and how living languages change by virtue of the way people use them and the world does not come to an end when they do.

A short anecdote about this cartoon: when I lived in NYC I really loved Halloween because it was the only day of the year that it was safe and acceptable to ask a stranger on the subway, “What are you supposed to be?” It was definitely not, however, the only day you wanted to ask that. My first Halloween there I was still fairly new to town and asked a number of people on the subway about their costumes and everyone was in a friendly, party mood. I asked one man if he was supposed to be Abe Lincoln or Moby Dick’s Captain Ahab and he indignantly informed me he was an orthodox Jew. I felt like a fool and apologized, but in my defense, we didn’t have those in Oklahoma when I grew up. Well, we probably did but they didn’t come out in daylight for fear of being subjected to some of the Deep South’s special hospitality. 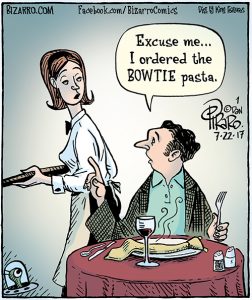 I prefer the Half-Windsor in marinara sauce, please. And how long do we have to wait for a restaurant that offers bowtie pasta along with a pasta top hat and garlic bread cane?

If you’ve made it this far, you are my personal hero Mr. and Ms. Jazz Pickle. Thanks for not being one of those people who just drops in for the cartoons and misses all of the mediocre wit and wisdom of the words in between. Till next time, be happy, be smart, be nice.

THE AFTERPARTY: To reward you, here’s a quick back story to the image behind the link at the top of this page which says “Big Bizarro-Head Barbie“. Soon after Bizarro became syndicated in 1985, I noticed that pretty much all cartoonists used the same kind of publicity shot; them sitting at their drafting table drawing one of their characters and looking as though they’d just been surprised by a photographer. Like this one of Charles Schulz and this one of Jim Davis. I decided I wanted something different.

Not the first but possibly my favorite alternative publicity shot was this one of me as Frida Kahlo. I created this in the early 90s for a Halloween party costume. It was before I knew anything about Photoshop so I had to built a kind of box with a frame on the front and a board on the back and then I painted the board to look like the background of a famous Kahlo painting. Then I did myself up like Frida with a shawl, Mexican peasant blouse, skirt, and sandals (not shown) uni-brow and headpiece, and wore the box over my head, resting on two straps over my shoulders. The little banner at the bottom was made of Foam Core Board and was suspended by thin, stiff wires. The resulting photo taken by a friend became my publicity shot for a couple/three years and ended up on the back of one of my Bizarro compilations.

After using the Frida shot for a few years, however, I thought up the Big Bizarro-Head Barbie idea. I drew the background and lettering on a piece of pink cardboard, folded the edges to make a frame, cut a hole in the back for my head and attached a Barbie Doll body to my chin. I wanted to use the resulting photo on the back of one of my books but the publisher’s legal department said I couldn’t use an actual Barbie body because of trademark issues. The only work-around I could think of was to paint the body of the Barbie as uber-realistically as I could so it would look like a real doll in the photo. I’m a little disappointed that the trompe l’oeil didn’t turn out better, but I think the overall result is still funny. And yes, that was my real hair. I thought it was cool until someone said it reminded them of Weird Al Yankovic and I cut it short the next week. True story.