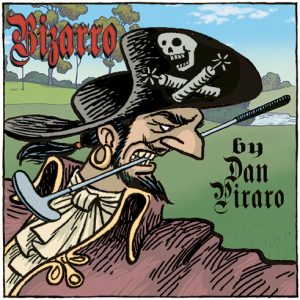 (To embiggenate an image, click any object within the drawing that would in reality weigh more than 18 ounces.) 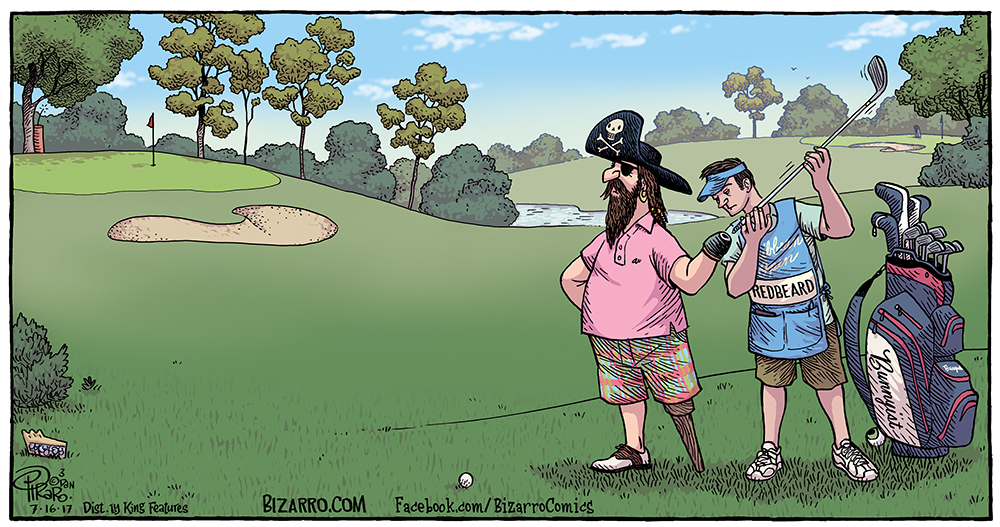 Bizarro is brought to you today by High Speed Golf Cart.

I’ve often remarked that one reason pirates are so popular with cartoonists is that it is the only way we can do a cartoon about a disability without being buried under an avalanche of angry mail accusing us of being insensitive. If I published a cartoon about a one-legged old lady at the grocery store people would get pissed, but the same gag about a one-legged pirate is fair game. That doesn’t mean I’ve never gotten angry mail from a pirate cartoon. I got three very nasty letters about this cartoon, but it is noteworthy that none came from a disabled person; only people who felt sorry for disabled people and didn’t like them being made fun of. In contrast, that same cartoon garnered numerous letters of thanks from disabled people who reported that their sense of humor was an important tool in overcoming the hardships and inconveniences they’d faced. And I got one letter from a prosthetics company that wanted to put that cartoon on T-shirts to give out to their clients. I’ve often used that story to help guide me in deciding whether or not to do a cartoon like this.

Another thing that this cartoon brings to mind is how inventive disabled people can be. I have three friends that I can think of off the top of my head who are missing limbs and it is pretty impressive how they find ways to do the same things anyone with a full set does. Which makes me wonder if there aren’t some one-handed golfers in the world. Without even googling it, I’d say yes, there have to be. I’d love to find out that at least one of them had actually devised a club holder like the one I drew here. 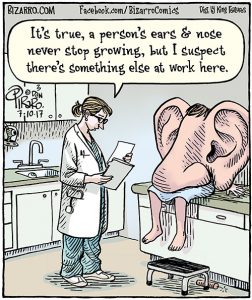 Here’s an example of a cartoon that features a disabled person but about which I do not expect to receive any angry mail. Unless there really is someone with a nose and ears the size of deck chairs, and I hope there isn’t. If there is, I’ve no doubt they’ve figured out a clever way to brush their teeth.

As most people have heard, it is fairly common for people to believe that your nose and ears are the only things that do not stop growing throughout your lifetime, which, for a full-nosed gentleman such as myself, is a harrowing thought. But after a few seconds of research into this issue I found something sort of interesting––two medical sites that contradict each other in answering this question. One said that this belief is true because your nose and ears are primarily cartilage and cartilage never stops growing, and the other said that medical science used to believe this but now realizes that cartilage doesn’t keep growing, but it is particularly susceptible to gravity so it only appears that your nose and ears are getting bigger, because they are sagging.

I’m pretty sure we can add a number of other body parts to this category, as well. 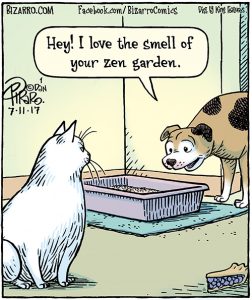 A reader of this blog recently commented that “dogs are the most wonderful creatures with the most disgusting habits” and I concur wholeheartedly. Yesterday, on our daily walk through our wild and wooly neighborhood here in Mexico, my two dogs and I encountered a stray dog, which is not at all unusual here. Most either ignore us entirely or are friendly and want to frolic a bit with my dogs. This one was the latter and I normally welcome that, but he was also covered in the shit of an unidentified species. The stench was unbearable and I could smell him from probably 20 feet away. My dogs thought this was amazing, of course, and wanted to be as close to him as possible, as though they’d randomly run into their favorite pop star. The stray was wagging his tail and wanted to follow us on our walk, so keeping them apart was a monumental effort on my part but I eventually succeeded in scaring him off, which I hated doing because he was so good natured.

If you feel inclined to help me buy doggy shampoo while improving your own life immeasurably, please consider taking advantage of the following link which leads to a book full of an amazing amount of hard work on my part for a minuscule amount of cash outlay on your part. 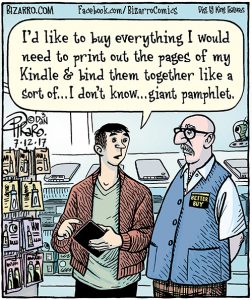 I’m not sure this is a good cartoon but some people seemed to like it, mostly those who prefer “real” books over e-books. I bought a Kindle in the early 2000s and read it exclusively for about six or seven years. I liked the convenience of ordering and receiving a book instantly, even in the middle of the night, as well as the lightness of it when traveling, the research features, etc. But then, in 2013 I borrowed an old-fashioned book from a friend and loved the experience so much that I never went back to e-books. I’ve been reading nothing but traditional books since, which is around four years now.

In a larger sense, I have no doubt that technology will end up killing us all. It is already making us profoundly unhappy and unhealthy as so many of us live our lives not in the infinite universe of real people, animals, and plants surrounding us, but trapped inside a tiny screen competing for “likes” on the World Wide Junior High School that most people simply call the Web.

This old-fogey moment was brought to you by life after fifty. 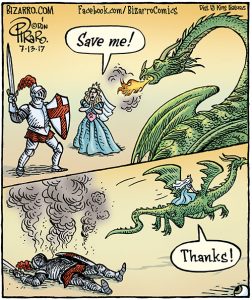 This simple bait-and-switch cartoon about the dragon actually stirred up some controversy and political tension on my FB page, which I find amazing. It’s fine if people want to waste time fighting with strangers, but I don’t even read those kinds of comments anymore because I’m just not into inviting more unpleasantness into my life, you know?  One thing I’ve learned in my three-decades-long career as a cartoonist is that there is never a shortage of people looking to be offended.

I glanced at one thread and it seemed to be a guy who objected to the “predictable politically-correct” stance that women don’t need men and he somehow found this offensive.  In my view, no one with a measurable IQ can fail to notice that the single most dangerous animal on the entire planet is the human male, and his favorite victim is women. The fact that they routinely make less money for the same work is reason enough to prefer the dragon.  In terms of violence and abuse of power, nothing else even comes close to the human male. (Not all men, of course, but human males as a category.) 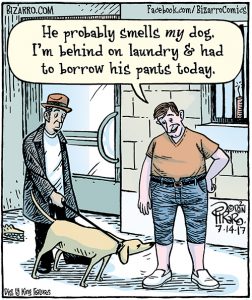 I like this joke about dog pants both because dogs wearing pants is automatically funny and because it gives a surprising reason for the oft-used expression, ” he/she probably smells my dog”. Good cartoons are often made of alternative interpretations of common sayings. From a few years back, here’s another version of the “smells my dog” line that I like a lot. If you clicked that link you may immediately notice that I used much of the same art for both cartoons. Like Hollywood, I sometimes use backgrounds and actors more than once. I mean, after 32 years of drawing doctors’ offices and store fronts, why draw the same damn thing again and again? 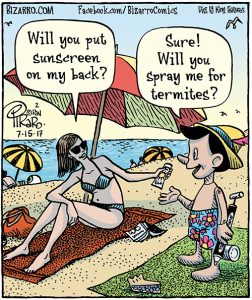 I’m not crazy about this Pinocchio cartoon but it’s okay. In the comments section, you may now commence with puns using the word “woody”. Or not.\

And by the way, last Friday was Bastille Day.

Thanks for joining me in this fantasy friendship, Jazz Pickles. I hope we get to meet in person real soon! Until my next post, be happy, be smart, be nice.