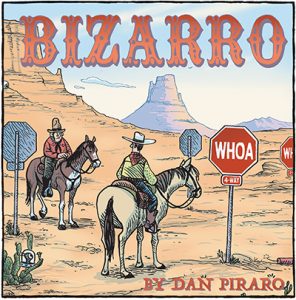 (To enjoy embiggenation, click on any mammal within an image.)

Bizarro is brought to you today by Cowboy Cartoonist.

We have some friends who live on a ranch outside of our town here in Mexico and they bring us horseback riding from time to time. When I was a little boy, westerns were my favorite kind of TV shows and movies, and when I wasn’t drawing, playing cowboy was my favorite thing to do. And, up until I was probably six years old, the Old West was 90% of what I drew. As I grew up in Oklahoma and got old enough to know some real cowboys, I realized I didn’t fit in to their world very well so I never moved out to the country, raised cattle, or voted Republican, but I still love playing cowboy.

Last weekend we got to ride around the hillsides here again and play cowboy for a day. It was amazing. Following are a few of my favorite shots from last weekend’s jaunt through the Mexican hills.

Here I am preparing to mount Speedy. It has been my experience that the horse named “Speedy” is often the slowest horse in a given stable. I’d ridden him before and found that Speedy can seem pretty chill unless you gallop him and then he earns his name. 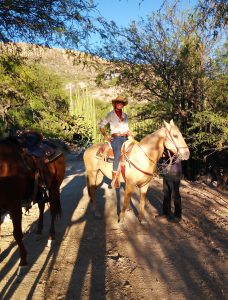 I love this shot of my favorite cowgirl in the whole Wild West, Olive Oyl. She is sitting astride Dorado, whose color sets off the highlights in Olive’s hair, but that’s not the only reason she likes him. Dorado did some galloping, too, and Olive hung on just like the vaquera she is. 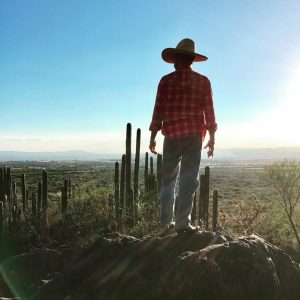 I’m not above posing dramatically for a photo but in this case, I wasn’t. I climbed up on a rock to see if the posse that was on our trail was still following us and Olive snapped this lovely shot without my knowledge. As it turned out, they were still following us and we had to hightail it into the hills and hide out for the night. 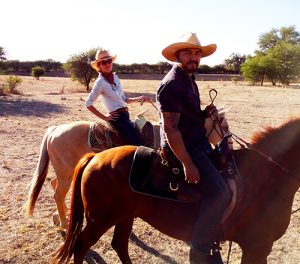 O2 and our good buddy and trail guide, Luis. It’s his uncle’s ranch that we ride from and that’s Luis’s own horse whose name escapes me at the moment. Is it “Skywalker” or “Coco Puffs” or “Debby”? I remember it was something with vowels and consonants. 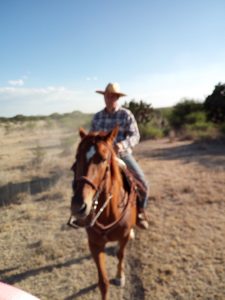 This is our friend, Frank, who is a successful painter (of fine art, not houses) and fellow local resident.  Unfortunately, we were riding through a blurry area when I snapped this shot.

Here’s Frank at his property in the hills. He’s built a small bunkhouse with an outdoor kitchen area and is currently working on an art studio. I’m so jealous of this property and his fine art career that it makes me hate him quite a lot. But it doesn’t affect our friendship as much as it might because I like him more than I hate him.

Here’s one last shot of me enjoying the cowboy life, then we’ll move on to cartoons. 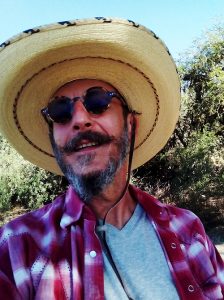 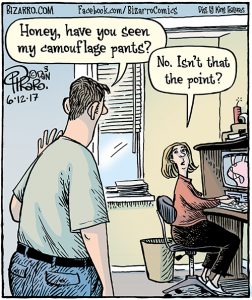 I’ve not seen his camo pants, either, and I hope I don’t. I generally steer clear of people who wear camouflage when they aren’t actually trying to hide from an adversary. I suspect they may have a heightened fascination for machismo.

This cartoon raises the question are seven beer bellies funny or gross? You be the judge. 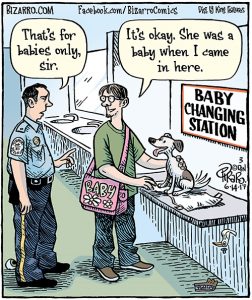 You see, he changed his baby into a dog. I can’t blame him because dogs are SO much easier to take care of than babies. Cheaper to educate, too.

I don’t know if villains do this anymore, but in those old westerns I loved as a kid, there would sometimes be a person who used a bullwhip as a weapon. If you aren’t tied to something, you can stop them by walking up to them. I always thought that was kind of funny. 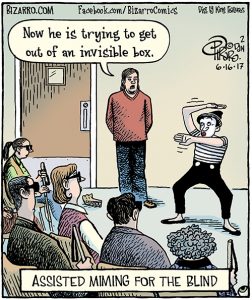 Somebody wrote to me to protest my use of blind people in this cartoon. This is one of my pet peeves that happens every time I do a cartoon featuring people who are routinely discriminated against: the misguided notion that mentioning a person who is in a comparatively weak position in society is tantamount to adding to their problems. This is a clear case of misplaced victimhood. If this cartoon made fun of blind people (or any other racial, religious, or social minority group) I would not have written, drawn, or published it. But it does not. It clearly makes fun of the man who is attempting to explain a mime to a group of people who cannot see him, as though he were translating speech for the deaf. He, and possibly the mime, are the butts of this joke and that makes it ethically neutral, in my opinion.

I’m a sports fan but have never liked basketball because as a short person, I can’t relate to the version that is played professionally unless I play on a smaller court with shorter goals and a smaller ball. It would be like watching a race run by people with four legs instead of two. Like the rest of this blog, that’s just my own personal, worthless opinion, of course.

Thanks for hanging out with me, Jazz Pickles. I enjoy this weekly imaginary play date more than you know. If you enjoy my work online, please have a look at the following hand-crafted messages!