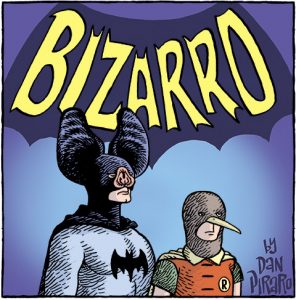 (Enjoy the gift of embiggenation by clicking any image.) 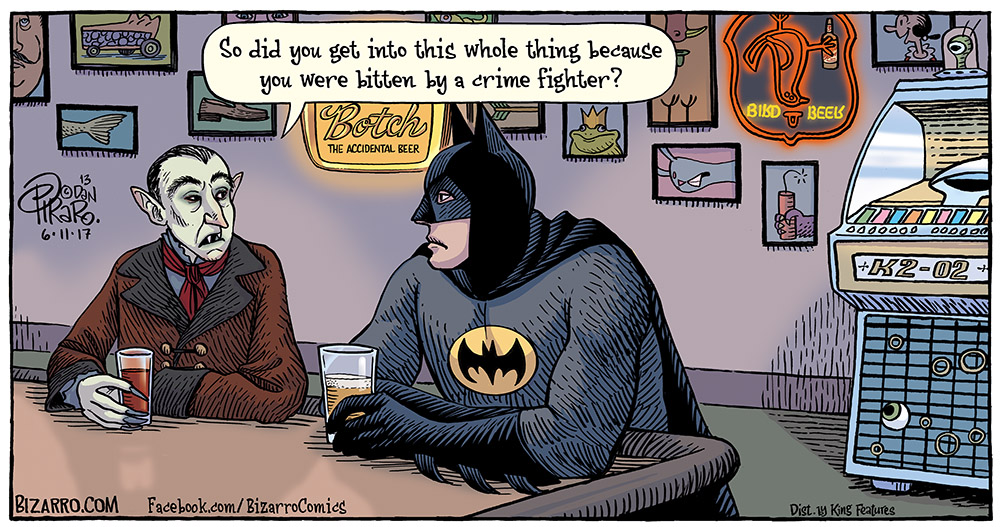 Bizarro is brought to you today by Bat Trash.

As most regular readers of my blog and cartoons in general know, syndicated newspaper cartoons are submitted to our distributors (King Features in my case) four-to-six weeks ahead of publication. So when I wrote and drew this Batman-meets-vampire comic, I had no idea it would appear in newspapers worldwide the day after Adam West died. He was a talented actor who is most known for playing Batman in the 1960s “Batman” TV show. I was eight years old when the show first aired and it was instantly my favorite. Batman was my favorite super hero and my toys were as dominated by Batman as a 1980s kid’s were by Star Wars. (The photo beneath the “Bat Trash” link above is of one of them.)

The various Hollywood versions of Batman over the years have been entertaining and he’s certainly a lot “cooler” now than he was in the 60s TV show, but Adam West will always be Batman to me. He and the show embodied a kind of tongue-in-cheek corny-cool that you don’t find much anymore, and Adam West’s Batman is the one I use most often in my Batman cartoons, of which I’ve had many in the past 32 years.

A Bizarro reader sent me this message yesterday on FacadeBook:

“You may remember an e-mail I sent you many years ago in which I told you that “Adam West LOVED your cartoon!” He was a guest at a comics/toy convention in Plano, TX and I got his autograph. I gave him a photocopy of one of your Bizarro cartoons, which showed Batman in the days of the Old West…Adam West laughed out loud when he saw this, and he showed it to his costars Julie Newmar and Yvonne Craig. They loved it, too.” 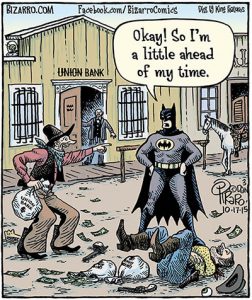 Thanks for reminding me of this story, Matt. I’ve had the pleasure over the years of being email pals with Julie Newmar who played Catwoman on the same show and was my first Hollywood crush. She’s a real sweetheart.

Here are a few of my favorites over the years. 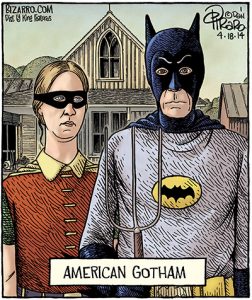 This one was particularly fun to execute because I’m a fan of Grant Wood. 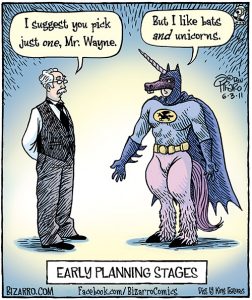 I’ve had a LOT of fun over the years fooling around with their costumes, as the ones above and below show. 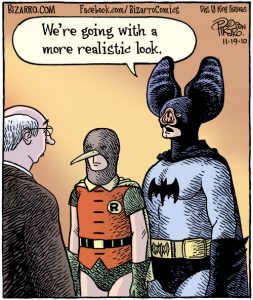 And this one was chosen for the cover of my book of Bizarro cartoons about super heroes. I was required to change their costumes for legal reasons. According to the publisher’s lawyers, you can get away with borrowing other people’s characters for satire in a given comic, but you can’t put them on the cover. 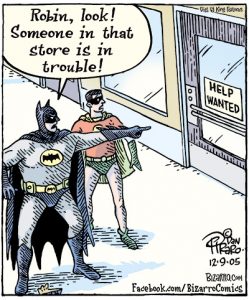 And back to today’s Sunday comic which is the first large one posted above, I’ve personally never seen a comic that explored the relationship between vampires and Batman so I smiled like The Joker when I came up with this one. Hope you like it.

I encourage you to share your own Batman memories in the comments section. Rest in peace, caped crusader!

And now we move onto the week’s cartoons: 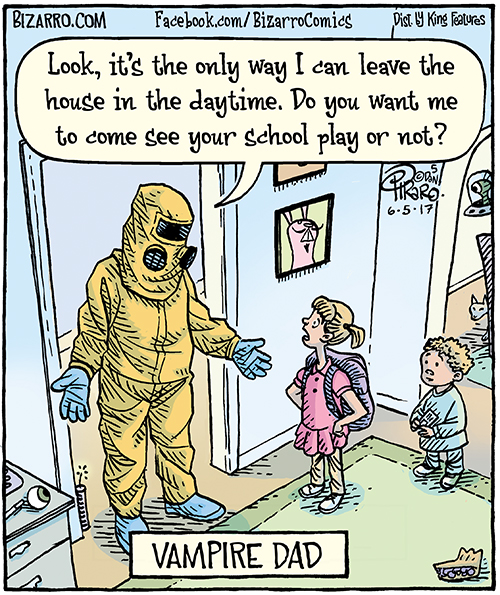 Here’s another vampire gag but of an entirely different ilk. It might be cool to have a vampire as a dad but if he had to go around dressed like this in the daytime, not so much. (Side note: If anybody launches a “Vampire Dad” TV show or series of young adult books in the next twelve months, I’m going to sue.)

Here’s a little twist on a phrase a lot of people have heard from their mothers. I thought it might be funny if a housekeeper said it––I hope I was right. I used to live with someone who was as messy as the guy in this cartoon and I wanted to say something like this to her on more than one occasion. Eventually I said this and more. Now we don’t speak. 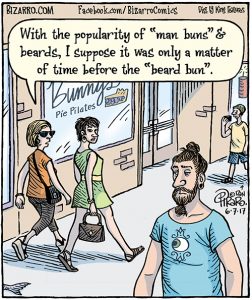 I admit I’m not a fan of what people nowadays call “man buns,” but as a person who enjoys dressing a little eccentrically from time to time, I shouldn’t criticize. Well, a little gentle cartoon fun is fair game though, right? 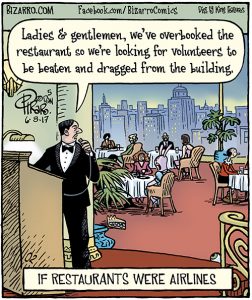 About a month ago a doctor was beaten up and dragged off a plane because he did not volunteer when United Airlines asked some people to get off a flight so a few of their crew members could go somewhere to make other flights. He had chosen that flight and paid for a seat because he needed to open his office the next morning to see his patients, but those weren’t enough reasons for United Airlines to honor their commitment to a customer. The way the world works these days it’s very difficult to live without using commercial airlines and they know it, so don’t expect this kind of thing to change anytime soon. Or ever.

On a lighter note, a few people wrote to say they enjoyed seeing Olive Oyl in the restaurant background. If you didn’t know, she’s the newest of my Bizarro Secret Symbols. 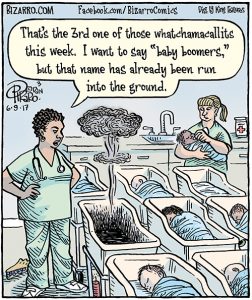 I asked myself to write a joke about “baby boomers” and this happened. I expected to get at least one piece of hate mail about publishing a cartoon that depicts baby violence but thus far I have been disappointed.

I did yoga regularly for a few years and got some good from it but I have to admit that in the end I found it unbearably boring. I know it is supposed to be meditative and I like meditation, but I found it difficult to get much of my “om” on while the teacher was talking.

That’s the way the pie crumbles this week, Jazz Pickles. Thanks for joining me. Until next time, be happy, be smart, be nice.