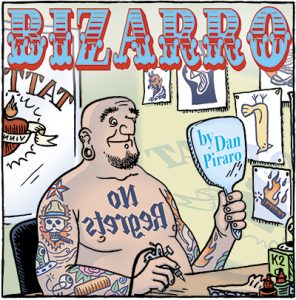 (When the urge to embiggenate overwhelms you, click any image.) 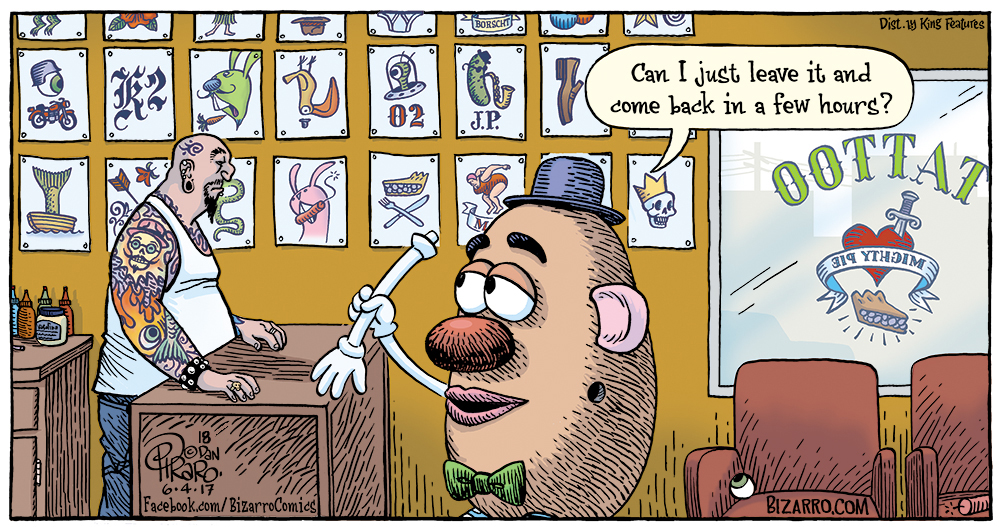 Bizarro is brought to you today by Questionable Tattoo Choices.

Before we get to the subject of tattoos, let’s start here: Many readers are already aware of my “Secret Symbols,” but some are not. I place little icons in almost all of my cartoons and put a small number above my signature to tell you how many to look for. That number is usually 3 or under but today it is 18. For a full list of my Secret Symbols, click on those blue words you just saw a second ago. Yes, Al Hirschfeld used to do something like this and I got the idea partly from him and partly from those “find the hidden things in this picture” games in books and magazines for children.

About this cartoon: I have some tattoos (NOT the one in the blue link above) and can attest to the fact that their application is painful. I’ve always thought it feels like someone is scribbling on you with a pointy, hot curling iron. Tattoos are pretty popular these days but they’d likely be even more so if you could just drop your arm off at the shop while they work and go get a couple of margaritas.

One of my tattoos represents an ex-person in my life and it has always been my least favorite. That was true even before that person was an “ex,” because it the tattoo was badly executed. As an artist, I don’t like having crappy art on my arm, and as a human, I don’t like having art on me that represents someone that I went to an awful lot of time and expense to get out of my life. I would just tattoo over it, but tattoo ink is fairly transparent so to do that, you pretty much have to use a LOT of black ink. I’m not a fan of big black tattoos, so I opted to go for laser tattoo removal treatments to lighten it enough to tattoo over without a lot of black. This takes many individual treatments, each at a minimum of two months apart, so it takes a fair amount of time. The laser process is just as painful as a tattoo, but fortunately, each treatment only lasts a minute or two. In summary, it’s a whole expensive, long, involved thing and I wish I’d never gotten this crappy tattoo. The other ones I have I’m fine with and once this crappy one is faded enough, I’ll get a new (colorful) one tattooed over the same spot and that will be that. I know––I have nobody to blame but myself.

The moral of this story is this: some things in life would be less painful and more convenient if our body parts could simply pop on and off like Mr. Potato Head’s. 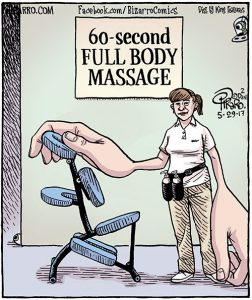 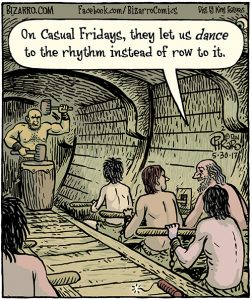 This cartoon attempts to find the humor in slavery, something I generally do not recommend trying to do.

I do, however, recommend you look at this graphic I have created about something that is increasingly important to me. 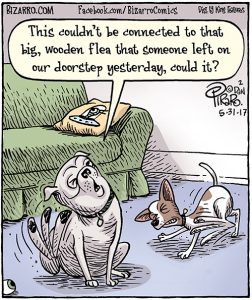 If you’re having trouble trying to make sense of this dog cartoon, read up on the Trojan War. 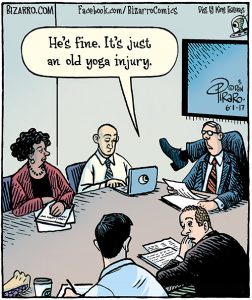 I practiced yoga a couple/three of times a week for a few years. I got three good things out of it: I adopted my dog from someone in my class who had rescued her from the streets, I bought a classic motorcycle that I’d wanted for years (1968 BMW) which I found out was for sale from a different member of the class, and I met my beloved Olive Oyl. I also got one bad thing: a back injury that nagged me for months and I could never quite get rid of until I gave up yoga and adopted a different form of exercise. My takeaway is that yoga is terrific for some people and some things but probably not in all cases for all people. To return to a previous theme, if my body parts popped off like Mr. Potato Head’s I would probably have been better at it. There were many times when I feared they might. 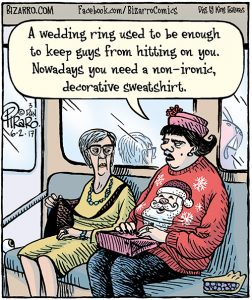 The most important words in this cartoon are “non-ironic”. 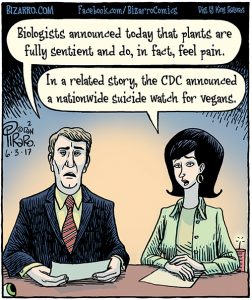 I used to hang out with a whole lot of animal rights vegans (as opposed to people who are vegan only for their health) and I thought I might get a lot of positive and negative feedback from those type folks from this cartoon. That hasn’t happened but it still might since the cartoon was only published yesterday (at this writing).

Years ago, during a friendly conversation about veganism with none other than Sean Lennon, he argued that, like mammals, plants might also be sentient and feel pain in a completely different way than we can understand. He was theoretically right, of course. Scientists are finding out all kinds of things about the surprising complexity of plant communication and behavior that was not known even ten years ago. If we discover and are able to prove that this is true, it will be interesting for vegans. That’s all I’m prepared to say about it at this time.

I’ve enjoyed our time together and appreciate your reading all the way to the end without interrupting me. Until my next post, be smart, be happy, be nice.

I also made these for you…