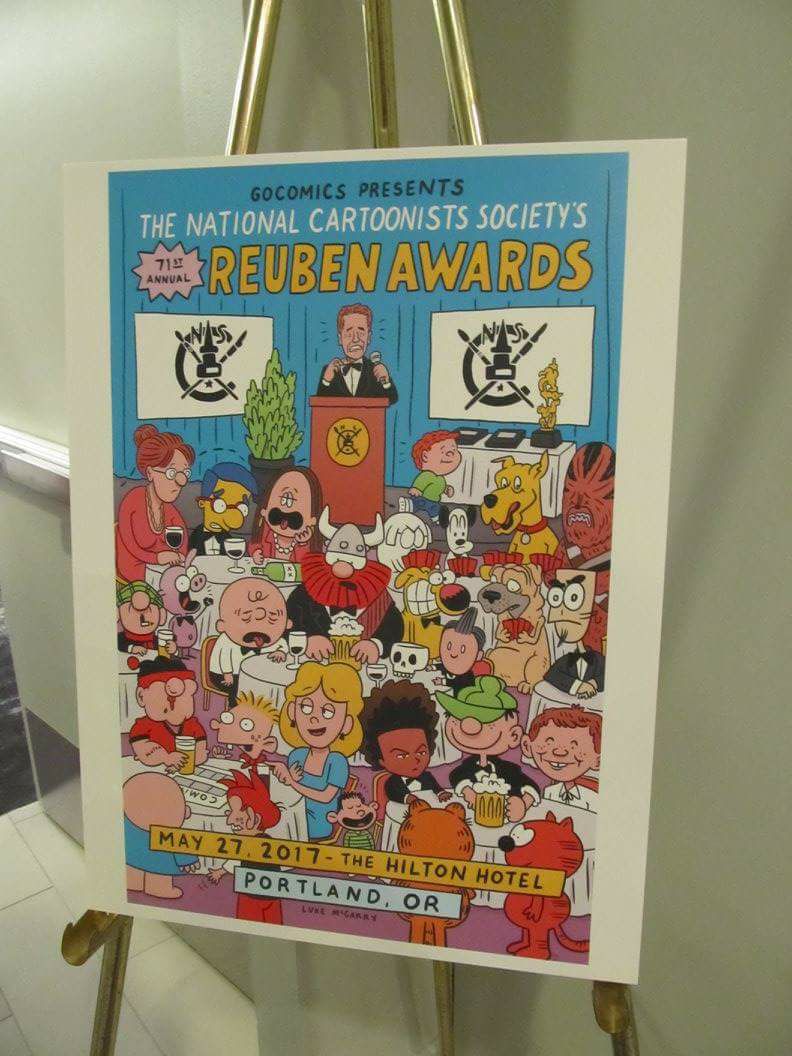 Last weekend I was in Portland, Oregon where I played tourist, hung out with cartoonist pals, and participated in the giant annual group hug known as the National Cartoonists Society Reuben Awards weekend.

The Reubens attract the best in the business from all walks of the art. It’s a grand affair. Sort of the cartooning world’s answer to the Oscars.  Sadly, I was flying solo as Steve wasn’t able to attend. “Dustin” was nominated for the Best Newspaper Comic Strip division award, our fourth nomination in that division — with a surprise win in 2010.

First, what a great city to host the Reubens. I had never been to Portland before, and was expecting rainy, cold weather and a lot of “Portlandia.” Not a bit of it (well, maybe a bit of “Portlandia”). It was sunshine and 80 degrees the entire four days. And there was tons to see and do, from Voodoo Donuts to Powell’s City of Books.

The confab began on Thursday night with an impromptu party at Wacom headquarters for members who arrived early. Wacom makes digitizing drawing tablets, plus the incomparable Cintiq — a drawing “tablet” that doubles as your computer monitor — meaning you draw directly on the screen. They have been a generous sponsor of the NCS for several years. The folks at Wacom had a number of stations set up at the party so all could give the company’s newest, sexiest products a whirl.

Friday kicked off with a bus ride to a signing event at Portland’s Doernbecher Children’s Hospital to draw for the kids and distribute goodie bags crammed with toys, books, comics, and crayons.

And with a glow of joy lingering from the hospital visit, our afternoon sessions began with “Wacom Made Easy with Jason Chatfield” a sort of primer where Jason showed off products such as MobileStudio Pro and Cintiq Pro. Jason is not only the cartoonist for “Ginger Meggs” (an age old Australian feature), he’s also a standup comic. Here’s a LOLarious little vid Jason created to start off his talk.

The rest of the afternoon was followed by Gram Dury and Simon Thorp, creators of the English power house comic, Viz Comics. Later, Brian Walker chronicled the history of the NCS, and Brian Bassett talked about his career from editorial cartoonist to  “Adam@Home” to the genius “Red and Rover.”

Then it was back to Wacom for the NCS Reuben Weekend Welcome Party.

Saturday began with a deluxe NCS Breakfast Buffet. And after filling up, members filed into the Annual General Meeting for the usual airing of grievances and blathering on about nothing.

Afternoon sessions began with Mike Richardson, giving us “a personal approach to comics history.” Mike is a Portland based publisher and founder of Dark Horse Comics.

After Mike, attendees jammed the Atrium Ballroom to first take in “On The Couch With The Simpsons” presented by Creator and Executive Producer Matt Groening, Animation Director David Silverman, and Writer/Producer Tom Gammill giving us a screamingly hilarious behind the scenes look at the one and only Simpsons.

As if that wasn’t enough, the packed room stayed put to see and hear the incomparable superstar cartoonist, Lynda Barry, who spoke of her tough early life and the path that lead her to become cartoon queen of the alternative weekly. Lynda later received the Milton Caniff Lifetime Achievement Award.

Saturday Night’s black-tie award banquet began as always, with cocktails, and photos along a red carpet. Then once everyone found their tables, the show began as Nick Galifianakis began “working the room,” roasting attending members and playing emcee, which segued into presenting the Jay Kennedy Scholarship Award, and the Milton Canniff Lifetime Achievement Award. The Jay Kennedy Award went to Ruby Xia, a jaw-droppingly talented cartoonist/animator attending Sheridan College in Ontario.

After dessert, the always sad remembrances of those we lost over the last year, and a much needed a bathroom break, 15 Silver Reuben Division Awards were handed out by a parade of presenters keeping us in stitches and suspense while honoring cartooning’s best and brightest of 2016 with envelopes torn “and the winner is” moments.

“Dustin” was nominated this year for Best Newspaper Comic Strip, as was Terri Libenson for the wonderful “The Pajama Diaries”, and Brian Crane, creator of the fan favorite, “Pickles.”

Then the real big moment came. The naming of this year’s Outstanding Cartoonist of the Year and awarding of The Reuben, which this year went to the sensational Ann Telnaes of The Washington Post.

Congratulations to all the winners!

Sunday was spent exploring more of Portland (as I say a great town), and another group signing event. This time for the general public and local cartoon/comics fans. The well publicized event attracted a huge crowd. A nice write up and gallery of photos can be found here.

And lastly, attendees made our goodbyes over a buffet dinner while watching some Academy Award winning animated shorts by Bill Plympton. Bill hand-picked the films and gave us a peek into how each was conceived and made.

And thanks a million to NCS president Bill Morrison and wife Kayre, for another phenomenal Reuben weekend. And let’s not forget to give a shout out to Latisha and the whole cast and crew of NCS Headquarters for all their hard work. Pulling one of these things together must be like nailing Jell-O to a tree. 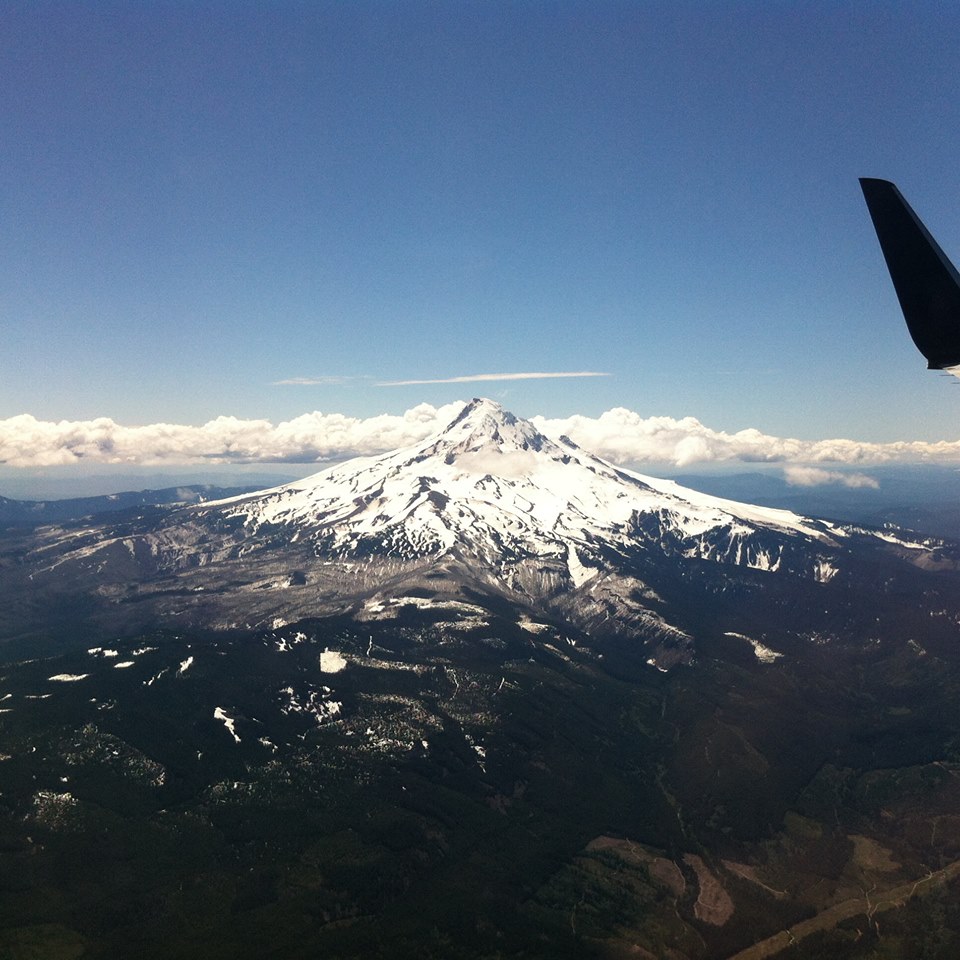 On final approach into Portland, and– Hey! Mountain!! 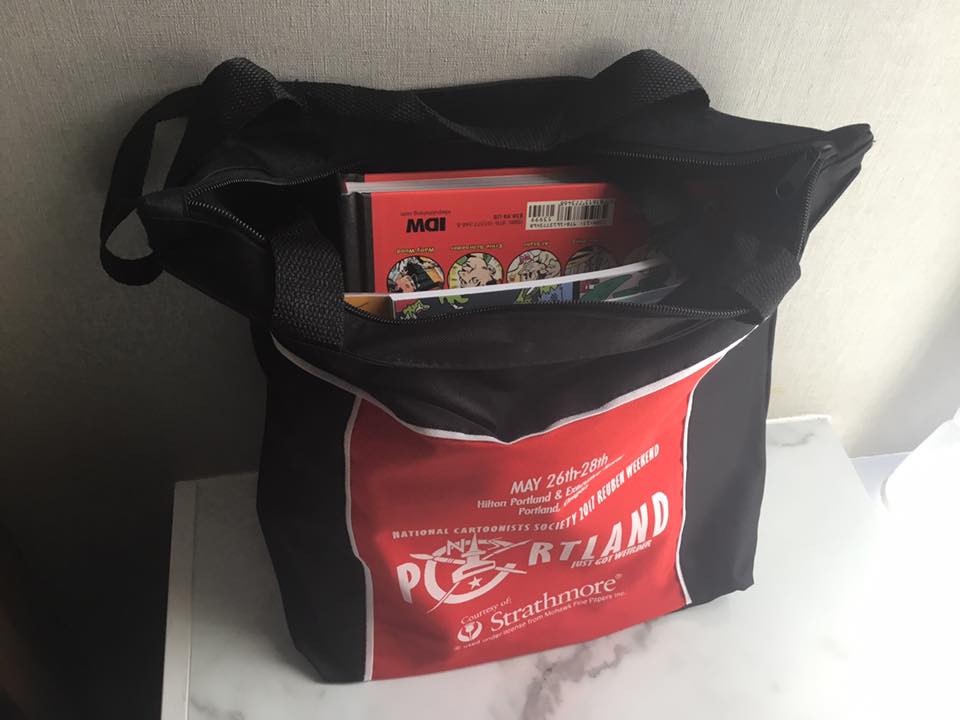 A hernia inducing Reubens swag bag… I had the hardest time fitting this into my already overloaded suitcase for the trip home. 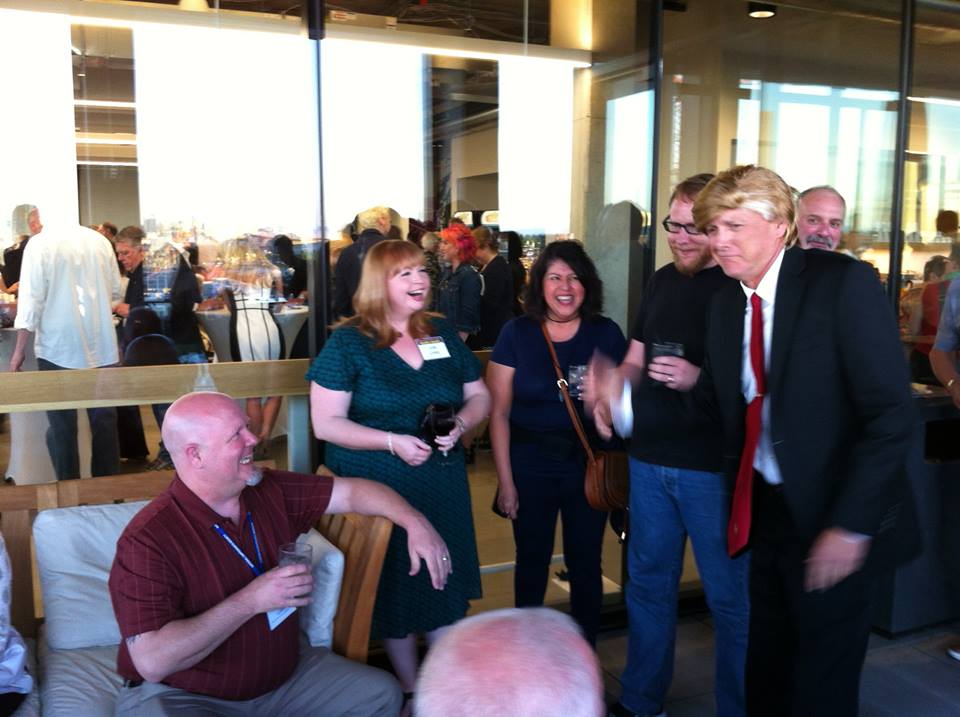 The Welcome Party at Wacom Headquarters had a surprise visitor. Trump declared it was the best and biggest Reubens in the history of the Reubens. “Tremendous. I love the cartoonists (except for those who live off the fake media). Sad.” 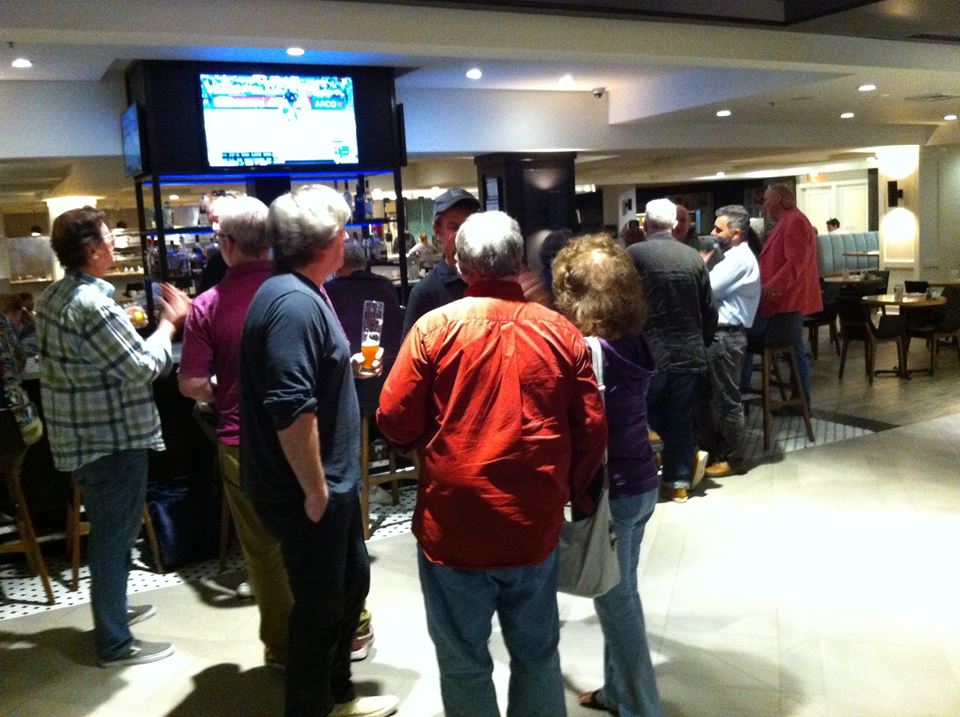 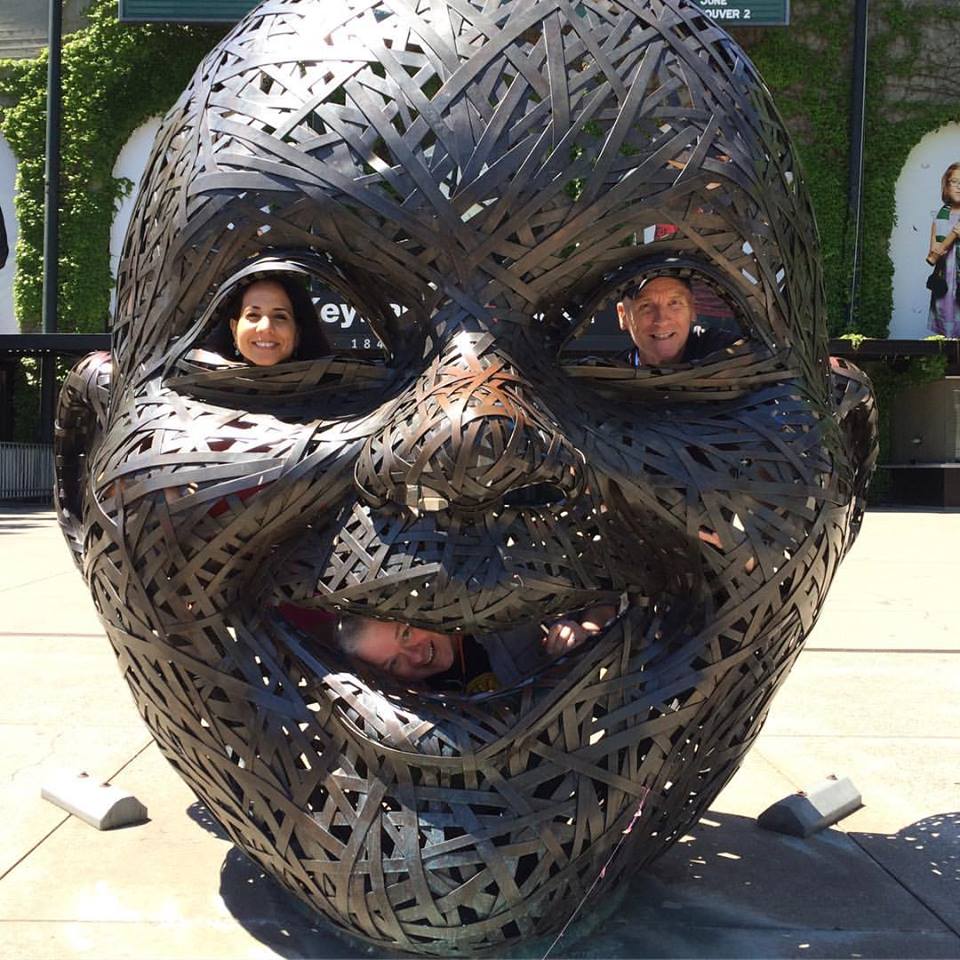 A little “Portlandia” weirdness, made even trippier by Maria Scrivan, Michael McParlane, and yours truly. (Photo courtesy Maria Scrivan.) 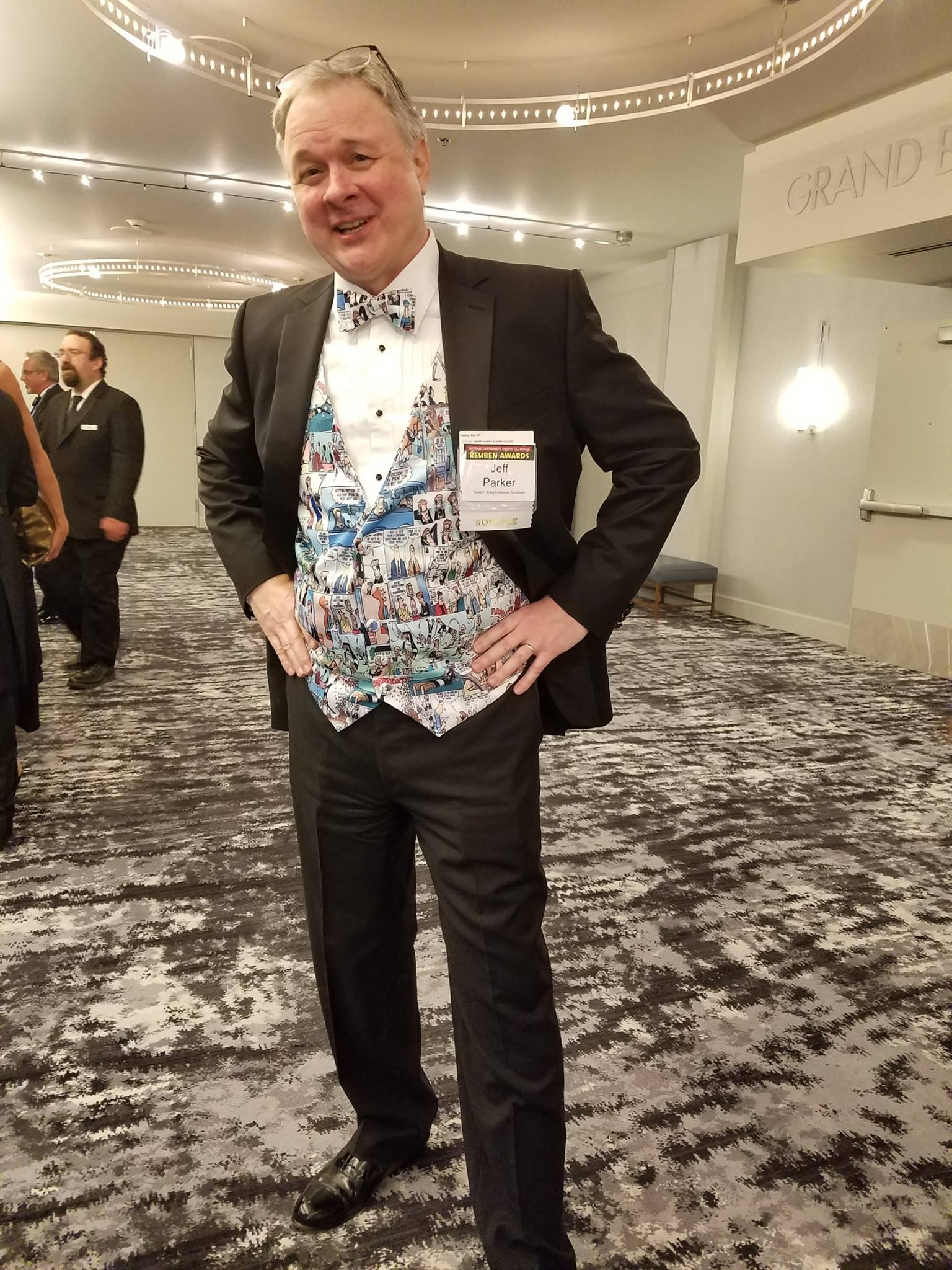 All dressed up for the Reuben Awards Banquet. My 80-something-year-old Mom made my Dustin vest. (Photo courtesy Dan McConnell.) 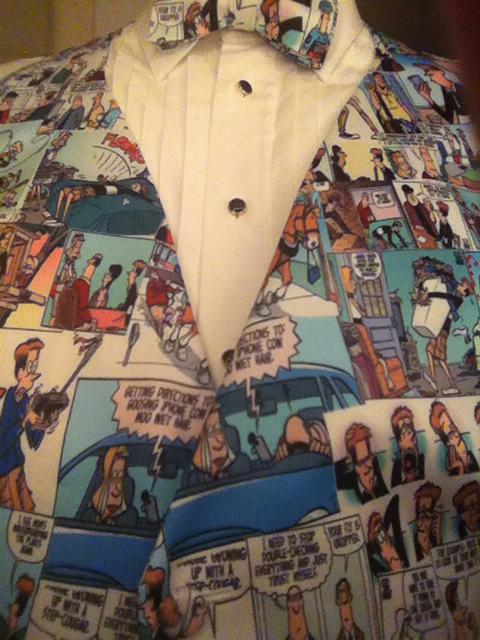 Here’s my vest close up-ish. It was a hit. 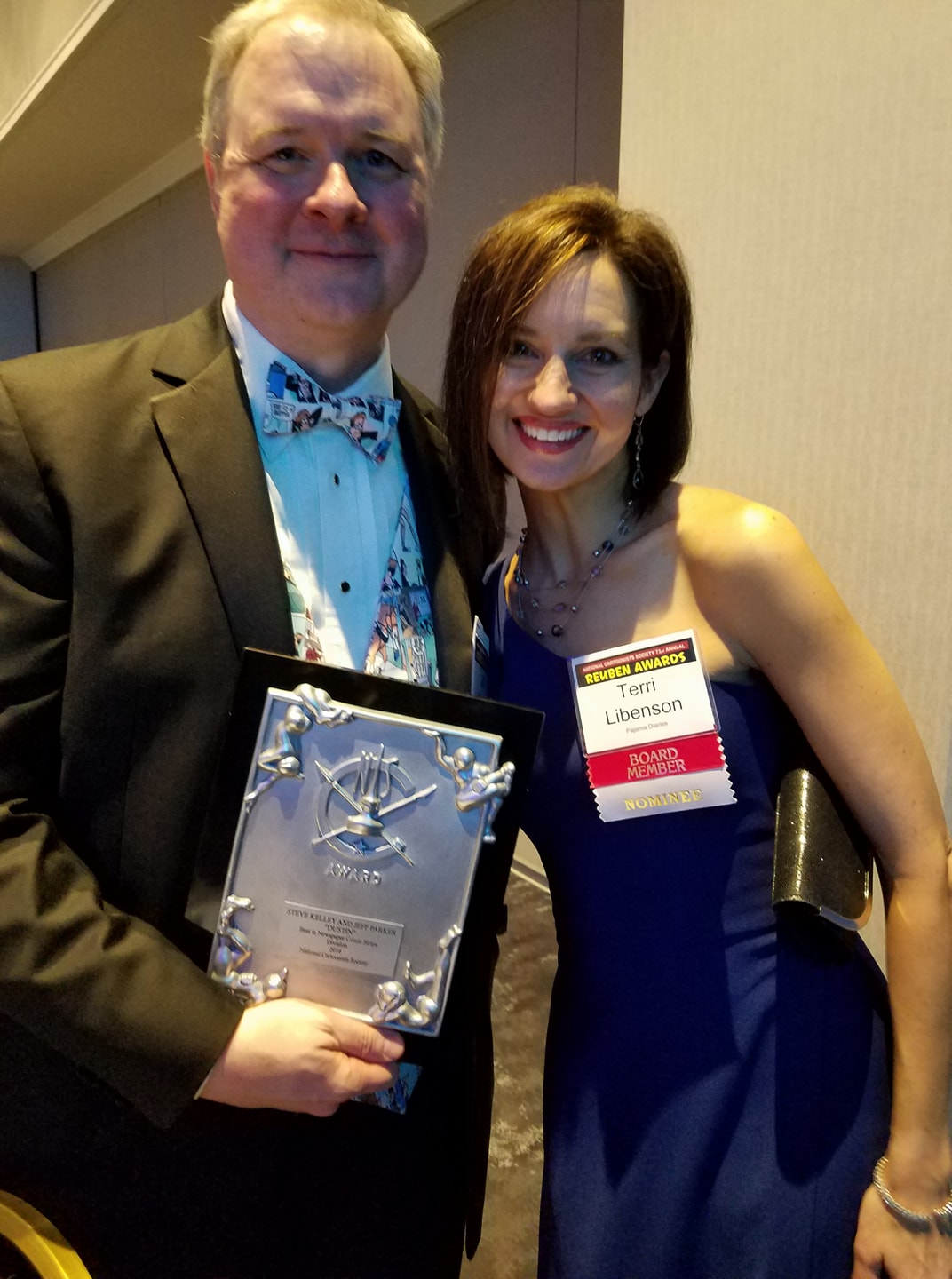 Getting some very generous congrats after the awards were handed out from Terri Libenson, who was also nominated for her wonderful “The Pajama Diaries” comic strip as was Brian Crane for “Pickles.” Terri won Best Newspaper Comic Strip last year. (Photo courtesy Michael Davis.) 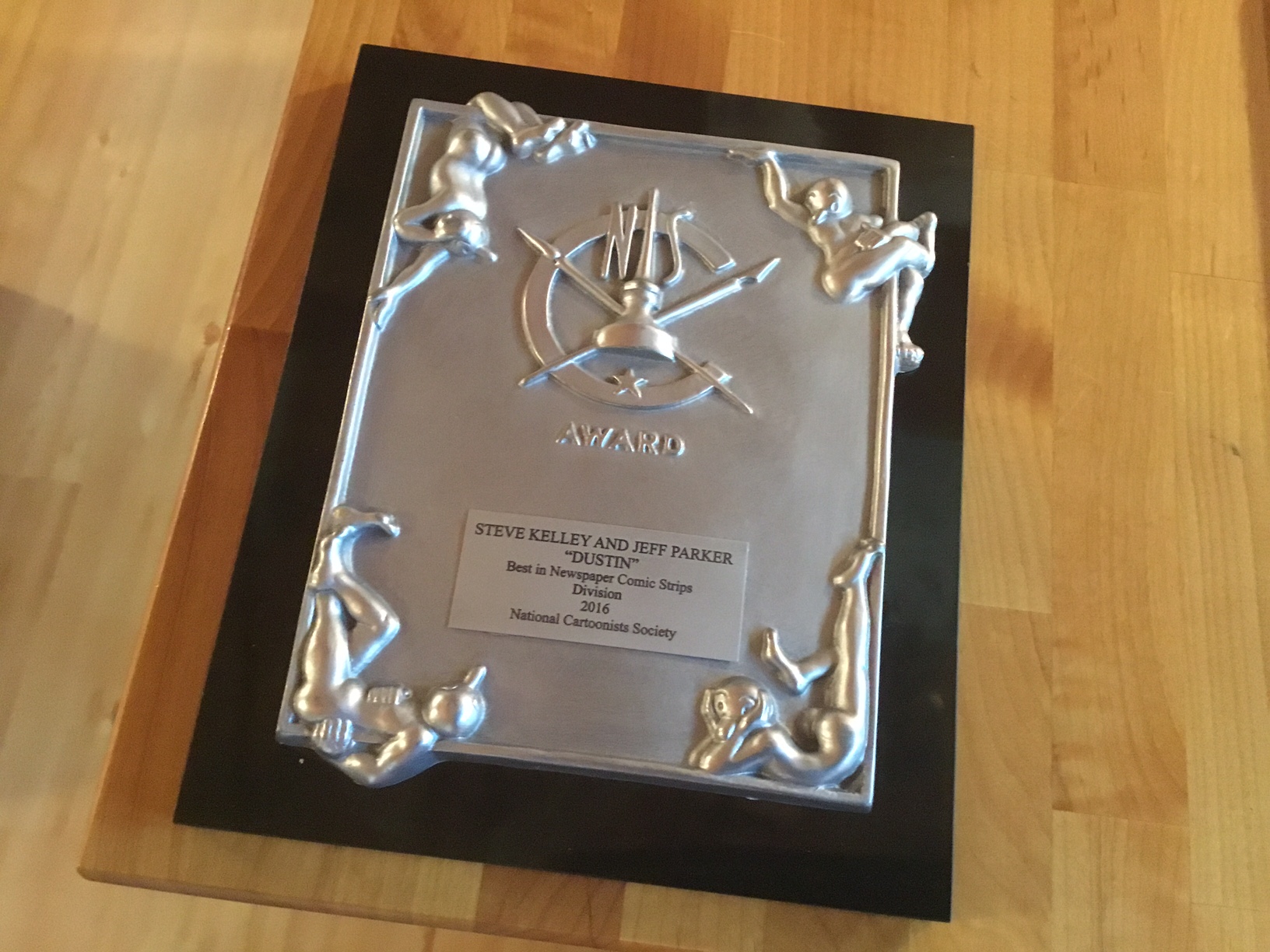 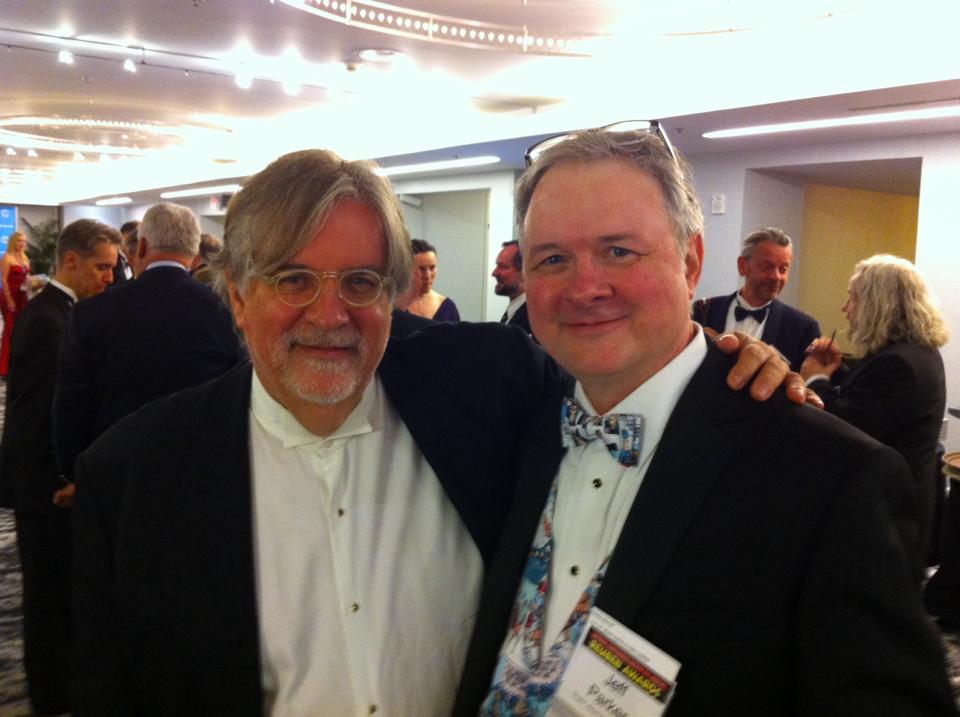 Not only did we take home some hardware, but I got to meet and chat with this guy– The Simpsons’ Matt Groening!! 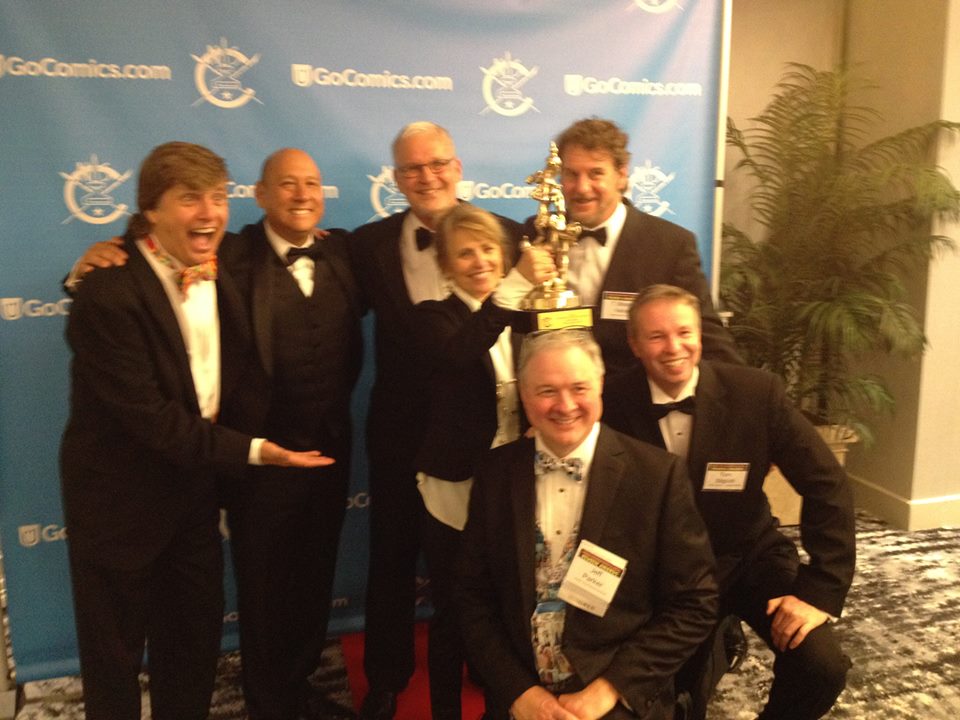 Editorial cartoonists fete their colleague, Reuben-winner Ann Telnaes, who finds a soft prop for her statuette (it weighs more than she does). L to R: Mike Peters, Mike Ramirez, Chip Bok, Brian Kelly, and kneeling with me, Tom Stiglich. (Photo courtesy of Ray Alma.)