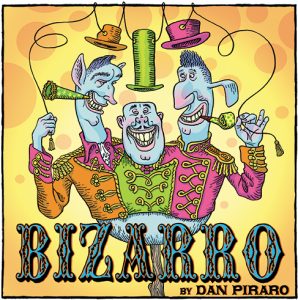 (Fulfill any image’s dreams of embiggenation with a click.)

Attention JAZZ PICKLES––> WANT TO MEET ME AND MORE THAN A DOZEN BIG-SHOT CARTOONISTS IN PERSON AT NO COST TO YOU? Come to the HILTON EXECUTIVE HOTEL IN DOWNTOWN PORTLAND at 1PM this coming SUNDAY, MAY 28, 2017!  It’s a totally free event open to the public, and we’ll be signing and selling books, drawing sketches, and giving discount haircuts with those tiny scissors that come on a Swiss Army knife. Hope to see you there! 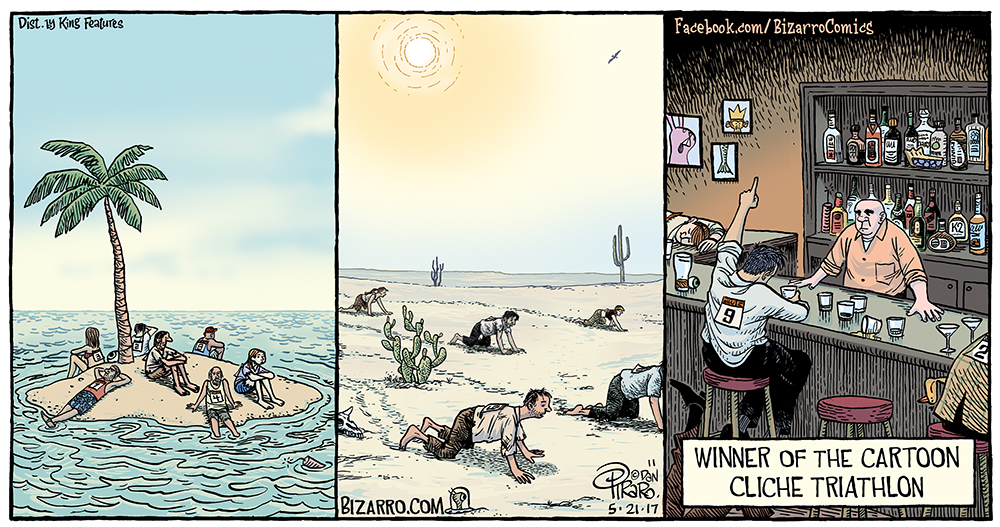 Bizarro is brought to you today by I Beg You Not To Click This.

I’ve said it before and I’ll say it again, cliches are the condiments of a cartoon sandwich.

For many decades gag cartoonists (as opposed to cartoonists who do character-driven comic strips, comic books, animation, advertising, etc.) have been returning to certain premises because they are pregnant with possibilities for expressing the human condition in a humorous way. There are many such cartoon cliche set-ups: the psychiatrist’s couch, the gates of heaven, the boss’s office, a llama in ballet tights, etc.

By using these standard set-ups, cartoonists also enjoy a kind of friendly competition. It’s fun to see how your gates-of-heaven cartoon stacks up against those of your colleagues and heroes. While musing over these cliches one day recently, I imagined the triathlon scene above. The three tropes I’ve chosen for this cartoon are among the most common to my mind: stranded on a tiny island, crawling through a desert, sitting at a bar. I don’t know how these cartoon characters are actually competing except for the last frame where only one guy remains conscious.

Since I will be at the National Cartoonists Society’s annual convention next weekend, which is little more than a drinking fest with a few talks and an awards banquet, I think it bears mentioning that most professional cartoonists I know can hold their liquor impressively. 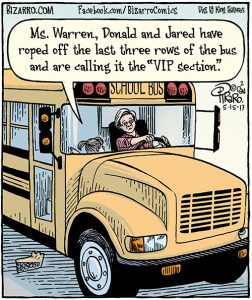 The cartoon above caused another political shouting match on my FB page. I think self expression is important in a democracy so I encourage people to discuss their thoughts and feelings, but man it gets nasty and childish awfully quickly. It upsets me to read those kinds of comments so I don’t. This cultural civil war that America is fighting on so many fronts is one of the biggest reasons I was ready to live outside the country.

I just saw the much talked about documentary “Get Me Roger Stone” and found it to be equal parts fascinating and depressing. While I knew the general story of how the handful of people who pull the PR strings for the Republican party unapologetically made the decision to abandon ethical politics back in the 70s and fool “unsophisticated voters” (their words) into voting against their interests, I was not aware of the insidious nature of the film’s main focus, Roger Stone, one of the main architects of everything from Nixon to Trump. To call him a scumbag is to insult both scum and bags.

On the bright side, Stone is the one the FBI is looking at most intensively regarding Russia’s role in our last election so there is the delicious (albeit it tiny) chance that he could end up in jail. Fingers crossed.

This Bizarro Bunny has something else he’d like you to consider:

And now, a fish story…

A cartoon about a hit man who works for fish. I don’t know. My mind wanders sometimes.

Some folks didn’t like this cartoon about Heaven’s gate and asked me if my intention was to ridicule Christianity. This cartoon isn’t about ridicule, it’s about perspective. The only thing that separates a religion from mythology is whether you happen to believe the stories and characters within it are actually real. And your opinion on that is most likely to depend on what you were told when you were a toddler. But as an educated adult, to continue to believe that your family’s tiny cultural corner of the world is the only “truth” and everyone else’s is myth is difficult to defend. It also helps to breed fear and contempt of “the other”.

Easy to defend, however, is your choice to buy one or more of my new book. It is suitable for people of all ages except under 2 years old, who may not be able to safely handle the pointy corners.

(WARNING: This book may have been shipped in a truck driven by a person who may have consumed nuts or dairy.) 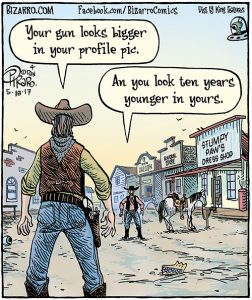 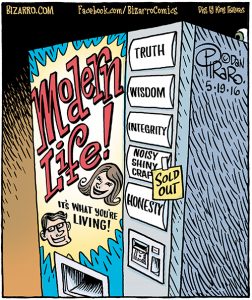 This “Modern Life” cartoon was very popular on the Interwebs this week. I actually first published this back in the 90s but I like it a lot and think it becomes more true every year, so I thought it could use another trot around the block. It works for all of America in a general sense, but in a more specific sense, I think it’s a decent graphic representation of Trump’s entire life. He’s been widely known for decades to possess none of the things mentioned in this vending machine except for noisy shiny crap; of which he has plenty and continues to build more. 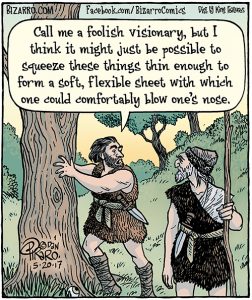 This man from primitive times has a wandering mind, too. (Callback to the thing I said above about that stupid fish cartoon.)

That’s it for this week, Jazz Pickles. Olive Oyl and I are traveling this week, winding our way toward Portland for the annual cartoonists convention on Memorial Day weekend. This is the first time we’ve been in the U.S. since we moved to Mexico six months ago and it seems even weirder than we thought it would. More on that later.

Until next post, be happy, be smart, be nice.