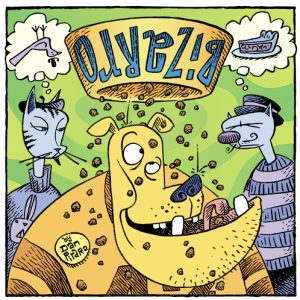 (For an embiggenation experience, click any object without corners in any image.) 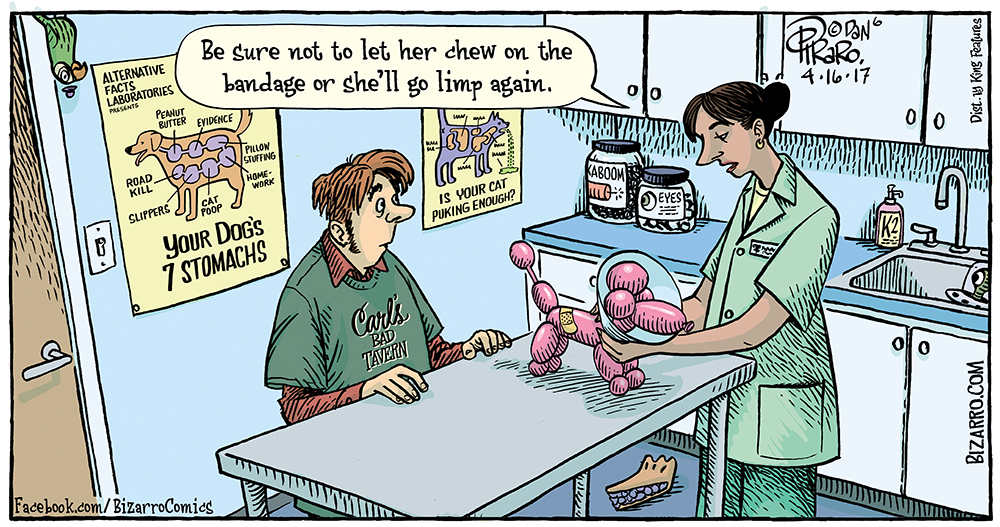 Bizarro is brought to you today by Tray of Voyeurs.

We had a busy week at Rancho Bizarro. As I mentioned in last week’s post, we adopted a Mexican street dog as a companion to our dog, Jemima, whom we brought down here to Mexico from what used to be the United States. The new dog is four months old and is recovering from a broken leg which she sustained from an unsuccessful encounter with an automobile while she was still on the streets. Today’s cartoon is about a dog in a cone collar because of an injury to its rear hip area, which is exactly where our dog’s stitches are (from the surgery that inserted a metal pin) and what’s notable about that is that I wrote and drew this cartoon four weeks ago, before I knew of our new dog’s existence. Spooky? Only if you’re prone to reading coincidences as messages from another dimension. Still, it’s kind of funny.

Here is a shot of new dog being super cute, and here is a picture of new and old dog together, attempting to chew each other’s faces off in a good natured way. They love this game and neither of them seems to get hurt.

Her full name is Monita Chichita but we’ll mostly call her Monita, which we kind of made up. “Mono” is the Spanish word for “monkey,” and by our our gringo logic, adding an “ita” to the end both feminizes it and means she is little, so we think it means “little monkey girl”. “Chichita” is a word we found on a list of dirty words that our Spanish teacher gave us that supposedly means “small boobs”. (I know that’s not all that dirty, but a lot of the other words on the list are filthy. FYI: If you want to say “big boobs,” it is “chichota” according to the smut list.) 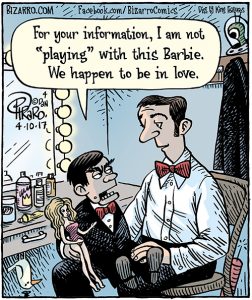 I mentioned recently that I like ventriloquism gags and here is another one. 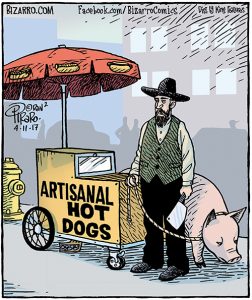 Surprisingly, this cartoon only garnered one complaint from a vegan/animal rights type person. I’m a fan of the artisanal movement toward hand-made goods but, like all trends, there are those who will take it too far and make it seem ridiculous. That was the primary motivation behind this cartoon.

The other thought here is that most of us modern folks in places like America have completely lost touch with where animal products come from and exactly what sights, sounds, and smells that entails. A hot dog stand like this one would likely get fewer customers but it shouldn’t. If you’re comfortable with where your animal food comes from and what that actually means, why turn a blind eye to the process? And if you’re not comfortable with it, perhaps it is time to change your habits. Unlike some of my posts from the past, I’m not advocating for either meat-eaters or vegetarians, I’m just saying facing the truth when making these kinds of lifestyle choices is probably a good thing.

One of the things I like about Mexico is that life isn’t sanitized and deodorized for the consumer’s comfort. Life here is a bit grisly and in your face. That feels more honest and gratifying to me than the mindless superstore, shopping mall culture of the U.S. 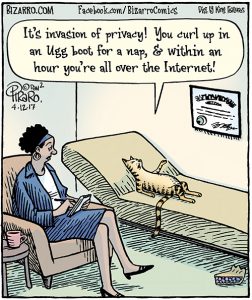 Some cats are so cranky. 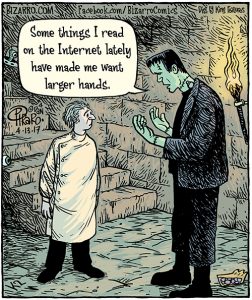 I truly enjoyed the whole Trump-has-tiny-hands storyline that happened last summer when it was still unthinkable that such an unstable, insufferable clown could become president of the most powerful country in the world. It’s not as funny now, of course. In case you’re unaware, this story started way back in the late 1900s when a reporter (I think it was from Spy magazine?) said Trump had small hands, and then Trump spent the next many years trying to negate and disprove the comment every chance he got. Because nothing says “confidence in one’s manhood” like whining and pleading your case in the face of a childish, schoolyard accusation. When it came up again in the primaries last year, he spent waaaaaaaaaay too much time disputing it again. Trump’s lack of dignity and confidence about virtually everything is befitting a chair-throwing guest on a Jerry Springer episode.

The reason the hand thing makes him so uncomfortable, of course, is that small hands are supposed to be an indication that a person has a small penis. The fact that this childish, middle-school-gym-class discussion was even part of the presidential campaign was absurd and insulting to anyone with an I.Q. high enough to write their own name without silently mouthing the letters, but still it persisted.

And now he has the nuclear codes. Let’s hope a foreign leader doesn’t insinuate his wing-wang might be bigger than Trump’s or we might all be vaporized. 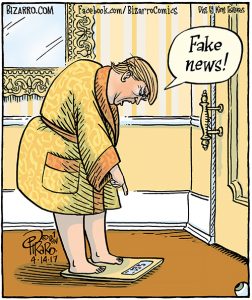 Even more childish than the Cheeto Mussolini’s obsession with his weiner is his habit of calling any journalism that contradicts his egomania, “fake news”.

On a more amusing note but still the same topic of America’s despicable political reality, Olive Oyl and I went into the town center today (called the “Jardin” here) to see what the local Mexicans were up to for Easter, which is a big deal lin Latin America. We’ve seen some religious processions and such this week, but today’s event was among the strangest I’ve ever encountered. Check out the links below as I explain it.

Apparently, the locals have a tradition of hanging effigies of people (real or fictional) that they believe have wronged them––the devil, historical or political characters––in the Jardin on Easter Sunday and blowing them up with explosives. (What this has to do with Easter is beyond my education or imagination.) Before it begins, there are numerous papier mâché characters hung on ropes (horizontal, like clothes lines, not vertical like a lynching) with three firecracker-type-things attached to a small hoop around their waist. They light the first one and it spews sparks, thus rotating the dummy (with the red bowtie in this pic). As the first firecracker reaches it’s end there’s a little “pop!”, then it lights the next one and it spews sparks and smoke and continues the rotation, then it pops and lights the third one, which does the same thing but ends with an ear-splittingly loud KABOOM! and the whole thing explodes into a million pieces. Then they move to the next figure. In all, there were around 20 characters today. Here’s a pretty cool devil effigy and here’s the unbelievably amazing photo of his explosion that Olive Oyl took on her iPhone. The entire extravaganza was a hoot but the best part was that the grand finale was an effigy of Donald Trump. (The sign on him says “DONALD pero no el pato” which translates to “Donald, but not the duck.”) Up until then, the crowd laughs and claps as each character is ignited and explodes but as the time wore on, the crowd began chanting “Donald! Donald!” until they finally lit him up. Here he is spinning. When he exploded, the crowd erupted for the first time in loud shouts and applause, as though the Mexican national team had just scored a goal in the World Cup. By my reckoning, the crowd was about half Mexicans and half gringos, and all of us enjoyed watching Trump disintegrate.

The macabre aspect of this exercise did not escape us, but it is a basic psychological fact that blowing off steam in this manner can be very therapeutic, and much better than going after the real politician with a noose. I believe this kind of public event has a healing effect on people and it is no secret that virtually all Mexicans and a majority of Americans despise DT. He would have had a very difficult time finding a friend in this town today.

It was so much better than an egg hunt and probably my favorite Easter ever. 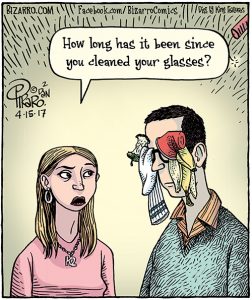 Thanks for reading this far, Jazz Pickles. If you like my content and want to support me, click on one of the illustrations below and consider helping me keep this wagon rolling. All five of us here at Rancho Bizarro will appreciate it a whole big lot! 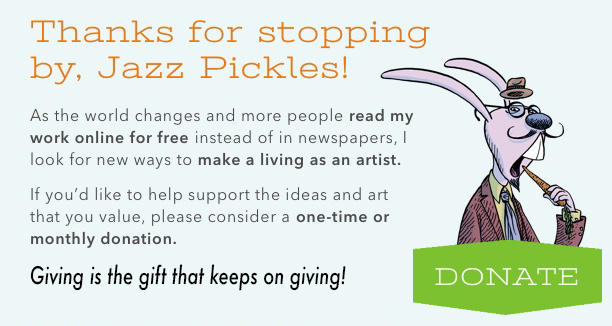 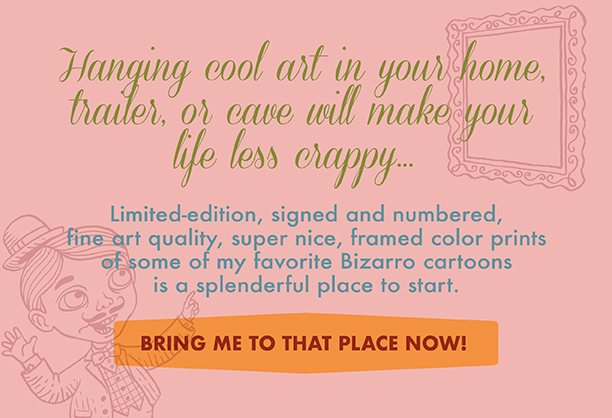