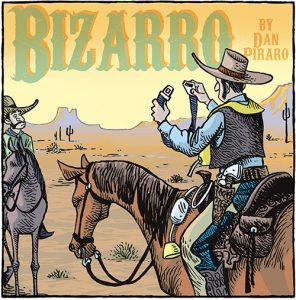 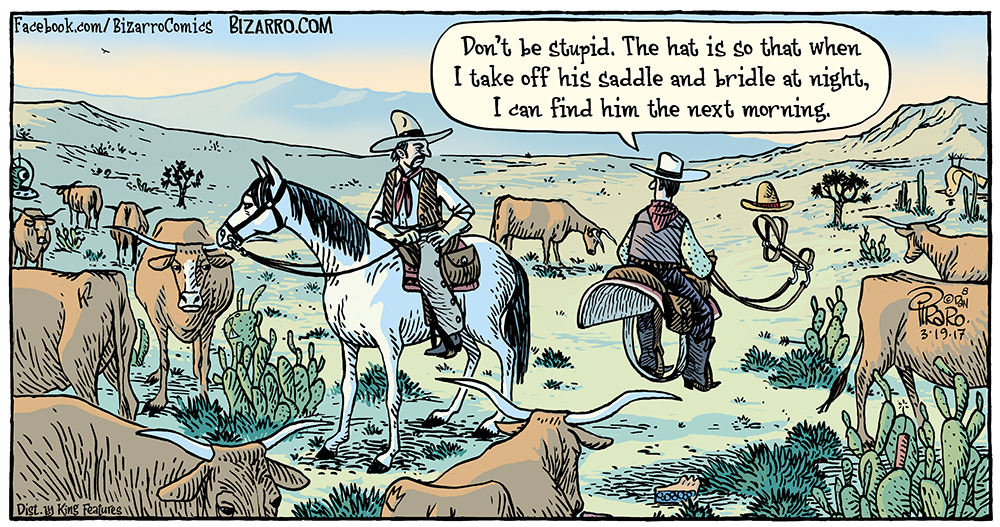 Today’s Bizarro is brought to you by Creativity.

I’ve long been a person who likes hats. When drawing characters, accessories like hats and clothing add a lot to the information about the character. If you draw a naked person, the only thing that tips off the viewer as to what kind of character he/she might be is the hair. Without clothes, so much is hidden: the era the character is from, their social class, what kind of job they might have, whether they are introverted, extroverted, a dignified person of refined taste or a raving lunatic.

I started wearing hats back in the 90s when my grandfather passed away. When asked by the family if there was anything of Grandpa’s that I’d like to have, I asked for his fedora, which he often wore with the brim flipped up all the way around. I wear mine that way now, too. (The front edge flipped down is too Bing Crosby for my taste.)

The cowboy in this cartoon has found yet another use for a hat and he came by the idea the hard way; it can be quite a shock to the system to get up in the middle of the night to take a leak and walk straight into an invisible horse. 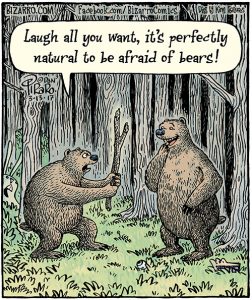 Everyone in their right mind is afraid of bears, as they well should be. We are natural enemies in that they are large, powerful carnivores and we are made almost entirely of meat. By saying that, I do not mean we should wage war on bears, of course. We should just stay out of their way.

In the spring of 2003, I was attending a party in Los Angeles and met a man who had spent more than a decade living among Grizzly bears in Alaska. I chatted with him for about half an hour and found out all about his unusual life and his strange comfort level around these wild animals and how he considered them to literally be personal friends. I thought his dedication to protecting them was admirable, but I couldn’t shake the feeling that it was a catastrophe waiting to happen. A few months later, in October of that same year, he and his girlfriend were killed by a Grizzly at their camp. I didn’t know him very well, of course, but since I had spoken with him only a few months earlier I could not help but feel a kind of chill go up my spine. Werner Herzog later made a movie about it.

Moral of the story: It’s great to love animals and want to protect them from humans. It’s not always great to want to pet them. 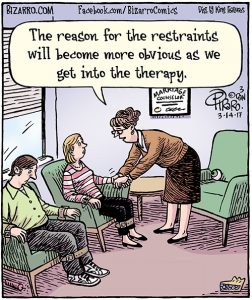 Okay, I think I’ve done enough cartoons about the difficulties of couple’s counseling. I worry that people are going to think that Olive Oyl and I are not getting along, which, I’m thrilled to report, is far from true.

BUT…I’ve done a fair amount of couples counseling in the past with various wives and lady partners, and have had mixed experiences. Some of it was super helpful, other encounters were a painful waste of time and money. In retrospect, I have come to see the failed attempts as being the result of attending counseling with the wrong partner and the wrong therapist. 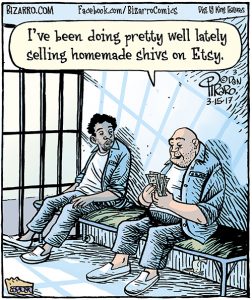 This cartoon sprang from the fact that so many people are selling hand-made stuff online these days. I’ve been trying to find ways to monetize Bizarro with products and such, too, but it is difficult because I don’t have regular characters that people fall in love with and will buy any piece of garbage I slap them onto. If you’re a big Bizarro fan, let me know what kind of products you might like to see. And be as specific as you can.  If you’d buy a T-shirt, would it be just one of my cartoons on a shirt, or would you like to see special art that just says Bizarro and has a cool picture or something? Like one of my title panels. (Here are four examples) Or something completely different? Bizarro dishtowels? Socks? Shivs? 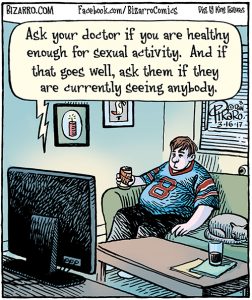 The first part of this caption is from actual commercials about erectile dysfunction. I used to work in the advertising field and found it unappealing on many levels. I’m one of those guys who mutes TV commercials within one second of their appearance and I go quietly nuts when watching TV at someone’s house who doesn’t do that.

I admit that some commercials are authentically funny, but my favorites are the ones that are accidentally funny. Like the one for the online dating service that is only for farmers. (If you’ve not seen it, google it.)

One of the most prominent erectile dysfunction drug companies has one that has had me scratching my head (no pun intended) for years by ending each commercial with an older couple sitting in adjacent bathtubs, holding hands. What? I’ve thought about it for years and still can’t come up with a scenario in which advertising people pitch it to the executives from the boner company and they respond with a thumbs-up. (Except in the scenario where they’ve taken so much of their own product that their thumbs are permanently sticking up.) 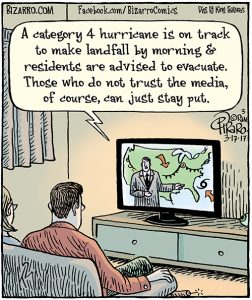 I got one piece of hate mail from the cartoon above. A longtime reader said that I was being condescending and that I was better than that. I responded a bit brusquely about the vastly underestimated importance of the press in protecting us from politicians, and then I trashed Fox News and praised the New York Times, Washington Post, and NPR. This didn’t sit well with the reader and he said I’d lost a fan.

Personally, I don’t trust TV news because they are slaves to ratings. As Fox News discovered that fear and terror sells and began to shoot up in the ratings, other networks followed suit and added an unacceptable amount of sensationalism to the news. These days I only trust NPR, The New York Times, The Washington Post, and other old, venerable institutions that care more about their reputations than their ratings. Yes, I know people will argue with that view. That’s fine. None of us actually knows what is real and true anymore, if we ever did. 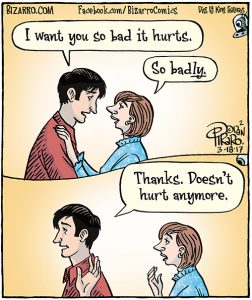 I’ve long used the term “grammar nazi” to describe people (like me) who were good at grammar and spelling in school and were taught that those things are perhaps more important than they actually are, and so they correct others with the best of intentions but less than pleasant results.

But, now that there are Nazi sympathizers in the White House on a daily basis (Bannon at least, probably more) I’ve decided to give up the use of “Nazi” when describing things other than people who sympathize with the tenets of the Nazi party.  This seems to me to be a time when it is not wise to marginalize that moniker with humor. Instead, when referring to pests like myself, I’ve switched to “grammilitia,” which doesn’t have quite the same ring but works pretty well. I’ll conclude by saying though I still believe in the importance of grammar and spelling in many areas, I am embarrassed by the number of times I’ve corrected people and have given up the habit, so this cartoon is self-flagellating.

Thanks for reading this far, Jazz Pickles. I truly appreciate the positive responses and donations I’ve received from readers of late, so thanks for that. As my readership shifts to being primarily online where I don’t get paid for my efforts, I continue to depend more on those of you who enjoy supporting the art and ideas that you enjoy. Here are some easy ways to do that:

You can make a onetime donation or sign up for a monthly contribution through my Tip Jar.  Any amount is appreciated and used for food, shelter, and the causes of good against evil.

Thanks also to those of you who bought one or more copies of my new book! (only $6!)

You could also help support my efforts by purchasing a color print from King Features (from about $25 to $100 framed.) They make your house, trailer, or abandoned van down by the river look much more elegant.

Finally, a limited-edition, signed and numbered, archival fancy schmancy fine art print ($200) or original inked Bizarro panel (more $) from this online art gallery is the perfect gift for yourself or some other lucky fool. All of these things help me keep the gates of Rancho Bizarro open for fun-loving caballeros like you!

Until next week, be happy, be smart, be nice.