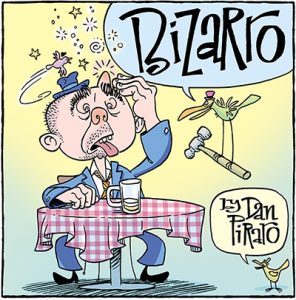 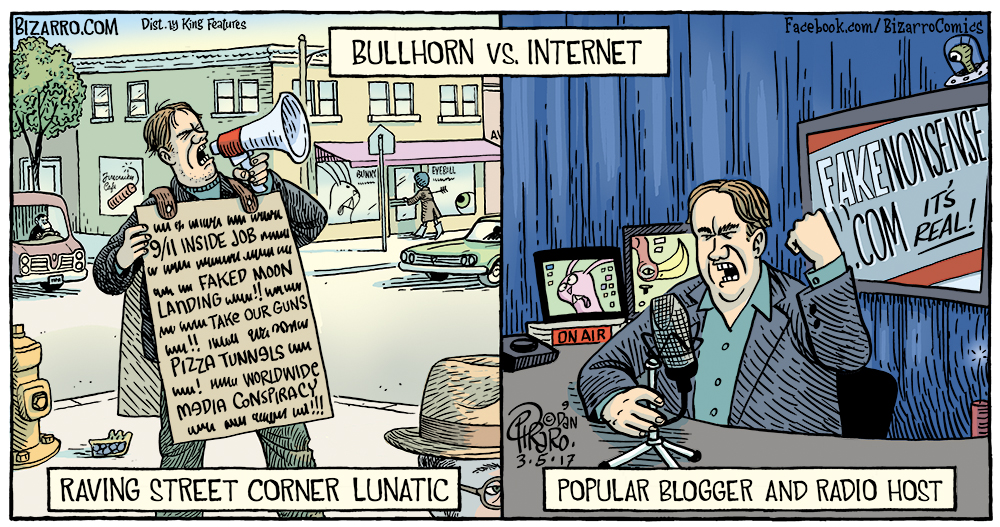 Bizarro is brought to you today by Obvious Connections.

Technology is terrific in many important ways but it is increasingly difficult to ignore the poisonous side effects. Like encouraging armies of idiots to act on their stupidity. Exhibit one: The current U.S. president.

Without the Internet’s undeserved veil of authenticity to hide behind, the crazy people who drive consipracy theories would just be lunatics shouting on a street corner, as they were before the Internet, and virtually everyone ignores a lunatic with a bullhorn. But now, they are able to find and build an audience, convince enough people of their insane ideas, and even influence the president himself enough so that he fills the White House with like-minded kooks.

If you’ve been in a coma in recent months or just ignoring the headlines as a last ditch effort to keep your head from exploding, the Cheeto Mussolini has surrounded himself with people who believe, among other types of outrageous, childish nonsense, that any number of well-documented domestic tragedies where innocent adults and children were massacred by madmen were “dramas” executed by the government in an attempt to use public outcry to take Americans’ guns away. Yes, they believe that but still walk free among us. The parents crying out in agony over the deaths of their children during an average day at school were, in their minds, “crisis actors”. They believe that and still hold jobs. (Jobs in which you can get away with large amounts of drool on your shirt.) And they also believe that none of the thousands of people that it would have taken to pull off these kinds of stunts have uttered a peep about it to anyone, including the press who are also in on the hoax by the tens of thousands worldwide.

They also believe that Hillary Clinton and other prominent Democrats were operating a child sex slave ring out of a set of tunnels beneath a family-friendly pizza parlor in D.C.  And when a lunatic who bought this absurd story hook, line, and sinker walked into said pizza shop with a rifle and held employees and customers hostage while he looked for tunnels and slave children, found none and gave himself up to the throng of cops surrounding the place, they believe that he, too, was an actor hired by the government to cover up the sex slave tunnels. Because to some people it seems more logical that hordes of wealthy, powerful politicians spend their time, efforts and resources acting out some ludicrous Hollywood horror film and eating kidnapped children for brunch (probably covered with an expensive cheese from one of America’s sworn enemies, like France) than it is that one simple-minded man with a gun believed an idiotic story on the Internet and went to find it.

In defense of the apparent millions of Americans who believe fairytales like these, it is human nature to crave stories that explain things that are difficult to understand, and if virtually anyone hears the same thing enough times, they will begin to believe it, even if only subconsciously. But it is the simple-minded who fall first and hardest, of course, and that’s the base Trump plays to.

I think it is worth mentioning that there are two kinds of simple-mindedness: those who are not well educated and those who just don’t have the genetic brain power to discern logic from fantasy. Folks who are uneducated can study their way out of their stupor, the others cannot. The main question I find myself grappling with in regard to America’s future is whether or not intelligent people (who are willing to vote) outnumber the conspiracy kooks by enough to rescue the U.S. from a very long period of inmates running the asylum. And will there be much left to salvage if they do. 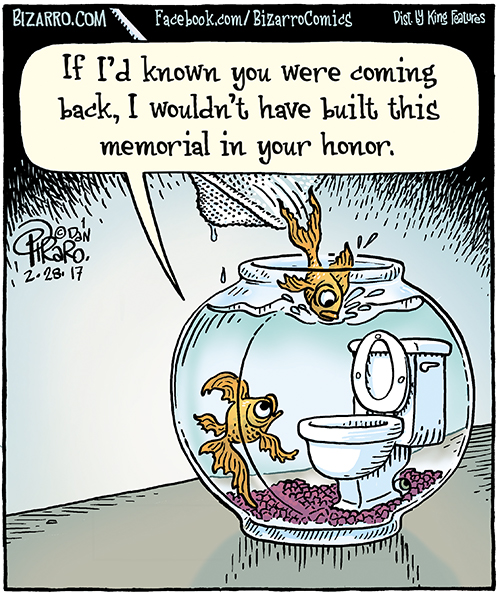 Another cartoon about the unfortunate connection between captive fish and toilets.

Teepees were the original campers, at least in the Western Hemisphere. Some people still use them, although few drag them around behind horses.

One of my biggest disappointments about Hollywood is that they didn’t follow “Bride of Frankenstein” with “Wedding of Frankenstein”. Perhaps it is because of the difficulties they would face having to invite every family member of the numerous people whose body parts were used to create the two of them. 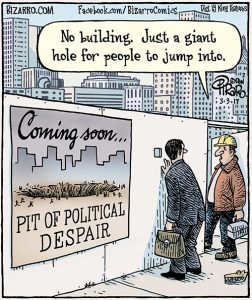 I got some dandy hate mail about this cartoon from the folks mentioned in my opening paragraphs. Here are two of my favorites.

I suspect these two are of the variety that cannot study their way out of their stupor. 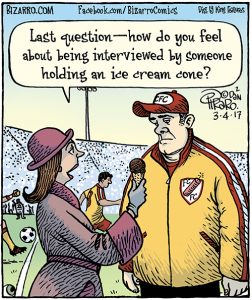 Here’s how “fake news” journalists conduct interviews. How long before the conspiracy community begins to circle microphones in pictures of journalists and claim they are ice cream cones? It’s probably already started happening by the time you read this.

Thanks for dropping by, Jazz Pickles. Below are some ways you can experience joy by helping to support the art and ideas that matter to you. If you’re enjoying my work online instead of in a newspaper, as most people do these days, I don’t get a penny for that. As the society and the economy changes, I have to look for new ways to make a living in this field. Thanks in advance for your support.

Get a few copies of my new book, full of crazy groovy art and only $6. (Buying it from any site that sells books is fine, doesn’t have to be the one I linked here.)

Make a one-time donation or a monthly contribution to the good people at Rancho Bizarro (there are only two of us––my beloved Olive Oyl and me) who fearlessly bring Bizarro to you 365 days a year in spite of the obvious dangers of publicly attacking a powerful, thin-skinned, authoritarian egomaniac.

Buy a print of any Bizarro cartoon you can find by using the calendar function on Bizarro.com. Starts at around $25.

Buy a larger, limited-edition, signed and numbered, archival, color print of one of my personal favorite Bizarro cartoons from an LA art dealer. ($200) They also sell some of my original ink drawings from Bizarro. ($1000)

Until next time, be well, be smart, be nice.