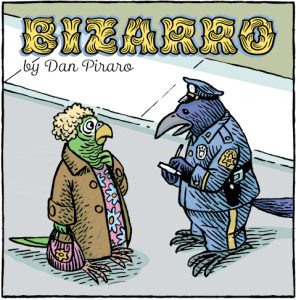 (Each character within these cartoons awaits your click and the embiggenation that follows.) 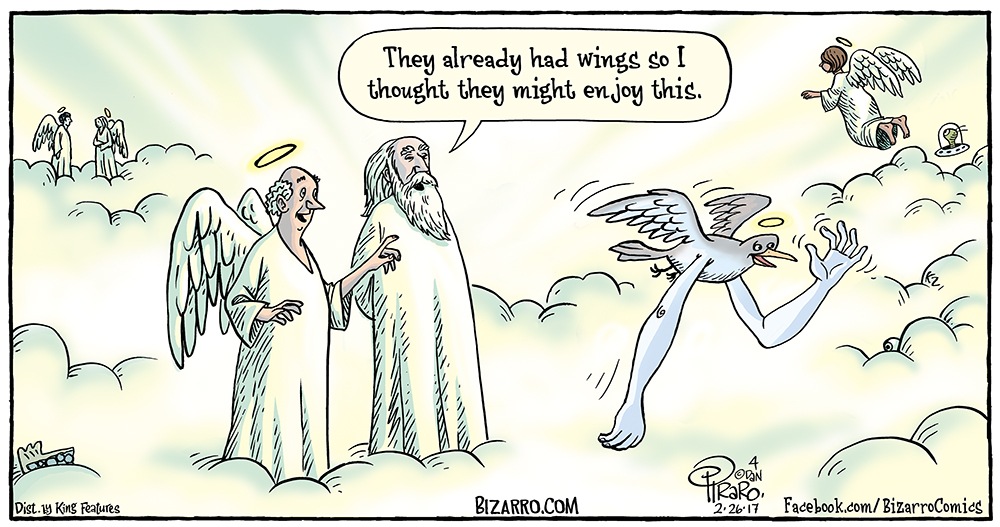 Bizarro is brought to you today by O’Reilly Confesses.

The art from the title panel at the top of each of my posts is usually originally drawn for that title panel, but is sometimes taken from another older panel. The one above was taken from this cartoon about public nudity.

Today’s big Sunday comic is another rendition of the traditional Christian mythology about heaven being a place where everyone is happy for eternity, living on clouds, wearing choir robes, and getting wings and a halo. Even when I was a child and believed in this notion, I objected to the idea that only humans can go there. The common teaching was that the rest of the millions of species that co-inhabit the planet with us––and tens or hundreds of millions that have gone before us––were/are just here for us to use as we see fit. So I’ve altered the myth a bit in my version today so that birds get to go to heaven, too, and they get human arms since they already have wings. I’ve been jealous of birds’ ability to fly since I was quite young and have no trouble understanding people in olden times strapping homemade wings to their backs and jumping off of cliffs. 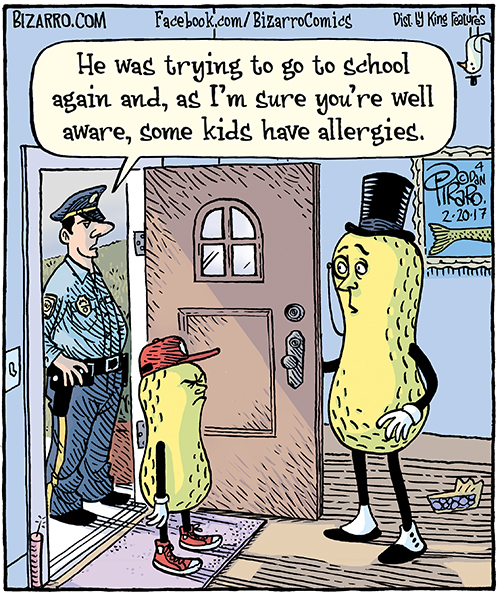 I feel sorry for kids who are allergic to peanuts because they can’t join in on typical childhood games like “In Which Sandwich Did I Hide the Peanut?” and “Monster Mosh Pit” where kids smear peanut butter all over their faces and run around a room crashing into each other because they can’t see with all that peanut butter in their eyes. But I feel even more sorry for Mr. Peanut and his son, who now live a semi-sequestered life, not being allowed on certain commercial airlines and having to be home schooled. There have even been persistent rumors that Mr. Peanut had an older daughter who was driven mad by the seclusion and ended up in a mental institution. That story has never been confirmed but there is a sign on a nearby state mental health facility that says “Warning: This building may be being used to process nuts.”  It is doubly sad and ironic because peanuts are not even nuts. 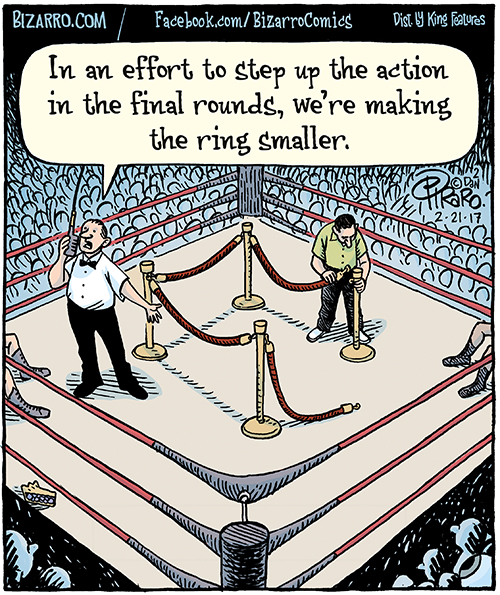 If you’ve ever climbed into a confined space and attempted to hurt someone until they can no longer stand up, you know how tiring it can be. Exhausting, really. And if, after an hour or more of this noble activity, neither of you is hurt badly enough to not be able to stand up and neither of you is smart enough to leave the enclosure and seek medical attention, it can get a little boring for the people who have paid money to watch you hurt each other if you both just stumble around and can hardly even summon the strength to punch the other person hard enough to detach a retina or incisor. This cartoon is about a solution to that problem. 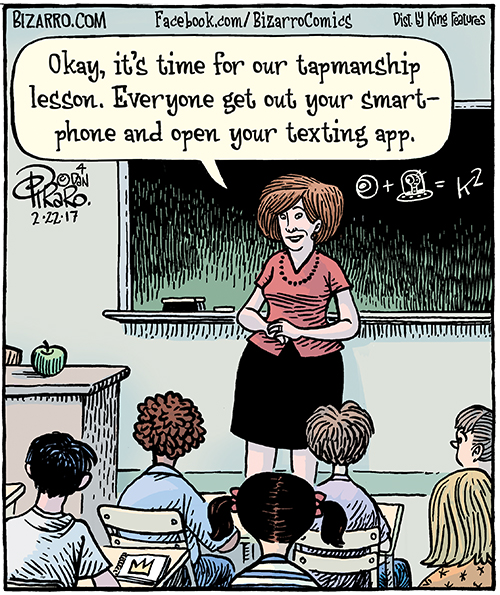 I’ve been hearing lately that American school children are no longer being taught to write or read cursive. (For those of you too young to know the last word in that previous sentence or to understand this cartoon, there used to be lessons called “penmanship” in all schools, where children were taught to express language with art supplies like pencils, pens, crayons, etc.)  It’s already alarming how few young people can write legibly even when they try to print like kindergartners, but it’s not seen as an issue because everything these days is about technology and typing with your thumbs on small, plastic rectangles. At first I was appalled in an old-man, these-kids-today… kind of way. But then I remembered that I’d always wanted to have a secret language with a friend and now I’ve got one with everyone over a certain age. We can jot down notes to each other in cursive and no one under a certain age will have any idea what we’re saying. Sweet! 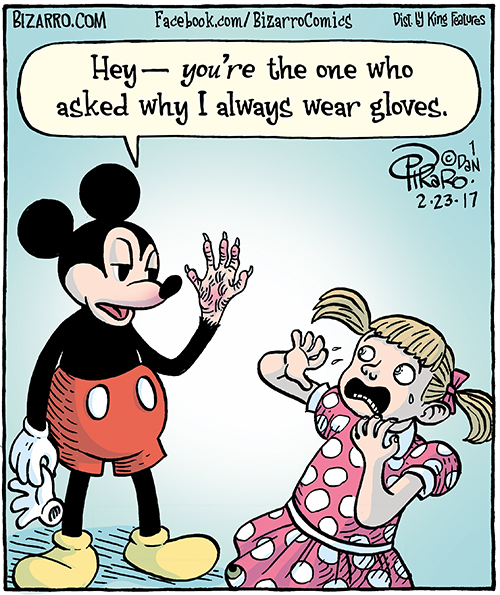 This cartoon about a certain billionaire mouse was quite contentious on the Interwebs this week. Some people objected to the fact that his gloves only have three fingers and a thumb but his actual rodent paw has four. The answer is that he puts his middle and ring finger into the same glove finger. Show business is all about deception, folks. Remember Millie Vanilli?

Other people were worried I would get sued because Disney is such a litigious defender of their copyrights. Fear not: satire of these kinds of characters is legal in this kind of small dose. If I tried to sell T-shirts or greeting cards with this image on it, I would get a cease and desist letter, but posting it online and publishing it once in newspapers is not illegal.

Finally, there have been questions over the years about why all the early Disney characters wore gloves. They’ve come up with all kinds of revisionist history about it but the truth is that in the early days of Disney, vaudeville was still a thing and among the most popular performers in vaudeville were minstrels; white people in blackface, singing and dancing like “negroes,” which was the polite term of the day. They almost always wore black and always had white gloves. The simple (and now embarrassing) truth is that Mickey was designed to resemble a minstrel, which was more a function of his place in history and probably not about intentional racism. Here’s a cartoon I did a few years back about Mickey’s struggles with racism.

Be thankful I didn’t do a cartoon about why Mickey wears pants. 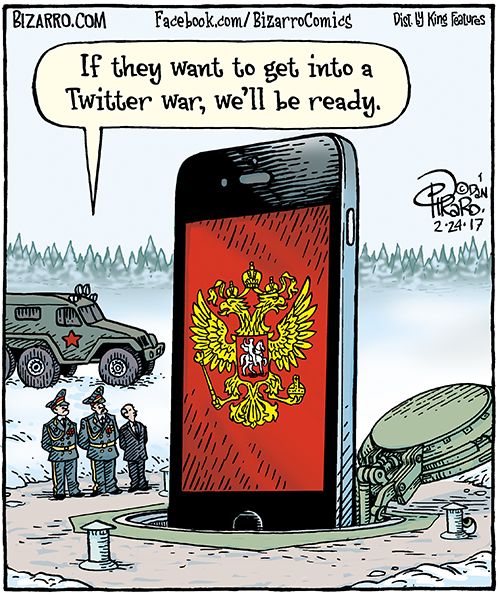 Well, we almost made it an entire week without a political cartoon but then this one popped up; literally, out of a missile silo. Currently, America’s Cheetoh Mussolini is in love with Putin and the oppressive, brutal, authoritarian Russian government that he runs but it is only because he fantasizes about having that much complete power over his enemies and detractors. He imagines that he and Putin are a lot alike because he mistakes fear mongering and machismo with good leadership, but there will come a time when Putin takes advantage of him and stomps him like a bug. I pray that the worst that comes of it is another childish Twitter war, which is an area where America’s Fuhrer excels, but with Trump’s notorious ego and transparently thin skin, when he gets jilted by his imaginary lover and realizes Putin is playing him for a patsy, the missile silos may open up. I cannot express in words how much I hope I’m wrong about that. 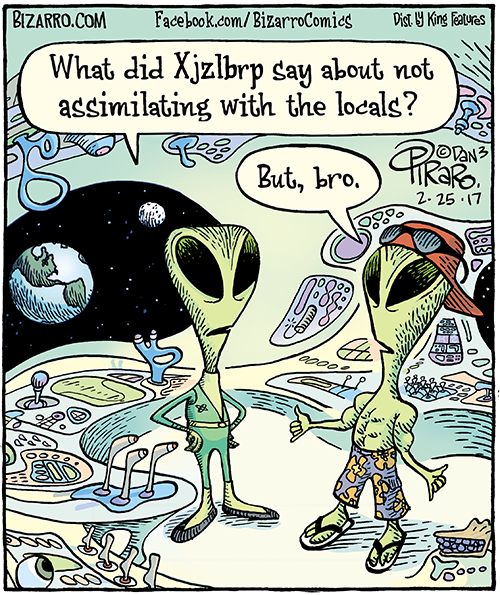 My last cartoon is a final bit of silly to round out the week. Living in Mexico among real people for the past few months has served to further point out the vapid existence of many Americans. Living in the U.S., it is very easy to lose sight of how incredibly sanitized life can be there, even for the relatively disadvantaged. This kind of gym rat “bro” has always rubbed me the wrong way but now that I’m out of that culture, even more so. I’m not saying there is anything wrong with exercising a lot and being “cool,” but when looking good and buying stuff is all there is to your life, you’re missing the best stuff. This guy probably can’t even write legibly.

Thanks for reading this far, Jazz Pickles. I got some nice responses and donations from some of you last week and I really appreciate it. As my readership shifts to being primarily online where I don’t get paid for my efforts, I continue to depend more on those of you who enjoy supporting the art and ideas that you enjoy. So thanks to everyone who made a onetime donation or signed up for a monthly contribution through my Tip Jar.

Thanks also to those of you who bought one or more of my new books (only $6!) or a color print from King Features (about $25) or a limited-edition, signed and numbered, archival fancy schmancy fine art print ($200) or original inked Bizarro panel (more $) from this online art gallery. All those things help me keep the gates of Rancho Bizarro open for fun-loving caballeros like you!