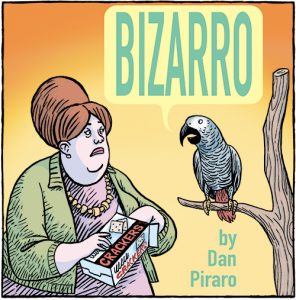 (If you wish to embiggenate any of these cartoons, close your eyes, click your heels three times and click them.) 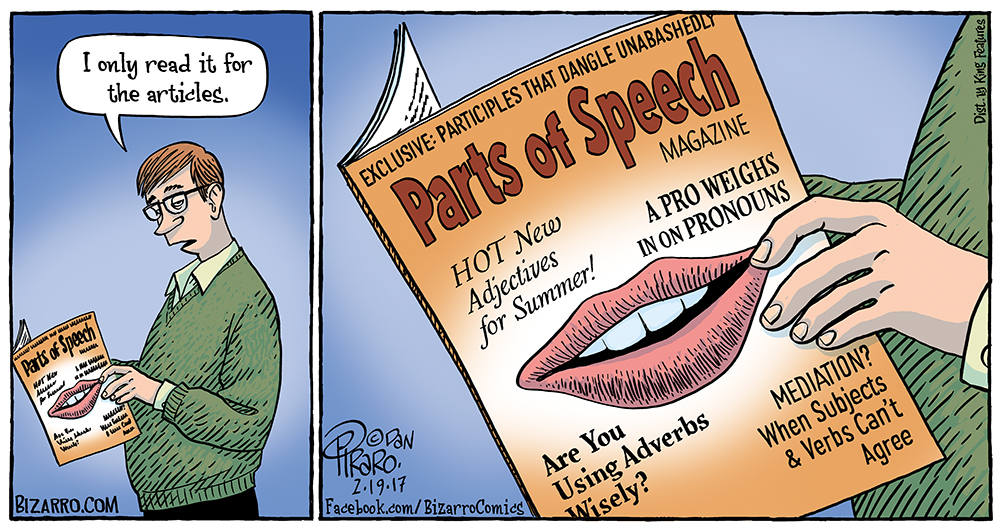 Bizarro is brought to you today by Anger Management.

As regular readers know, I enjoy doing fake magazine covers from time to time. It’s a fun way to use wordplay in a slightly more sophisticated way than just illustrating a pun. The basic idea for this one came from a reader who goes by the suspicious name of Kevin Bartlett. (It’s the perfect name for someone trying to “hide in plain sight,” wouldn’t you agree? I’m guessing he’s at least got credit problems if he isn’t actually in a witness protection program.) Anyway, “Kevin” envisioned a guy holding a magazine called “Parts of Speech” and saying he only reads it for the articles.

Some readers may not be old enough to remember the cliche this gag is built on. When Playboy first came out in the 50s, it was the first magazine to attempt to make nudie pics acceptable in polite society by filling the rest of the pages with legitimate stories and interviews. Well into my childhood in the 60s, men were still claiming to subscribe to it “for the articles”. These days, people aren’t as bashful about enjoying images of members of our species in a mating mood.

Bonus grins: Here’s a Playboy Magazine spoof I did back in 2011.

This cartoon that is not about cannabis was suggested by my longtime friend, Cliff Harris the King of Wordplay. It got a lot of Internet play last week and multitudes of readers reported having to read it several times to get the joke. It’s funny how often the mind sees what it thinks it’s going to see instead of what is actually there. Especially if you’re reading the comics stoned. 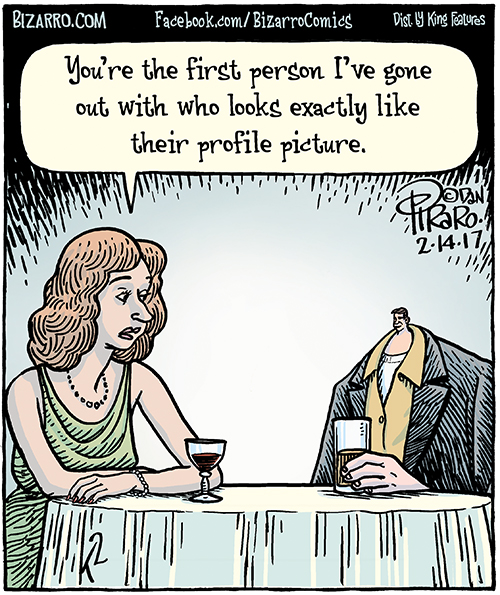 After I drew this gag about profile pics, it occurred to me that I’ve done a number of cartoons about people with extremely tiny heads. I’m not sure why I think this is funny, but obviously I do. In real life, it would not be, of course.

I published this cartoon on Valentine’s Day because I didn’t have one about the holiday this year. On rare occasion I will think to write and draw a Valentine’s Day gag enough ahead of time to publish it on the 14th. Here’s one of my favorites from 2014. 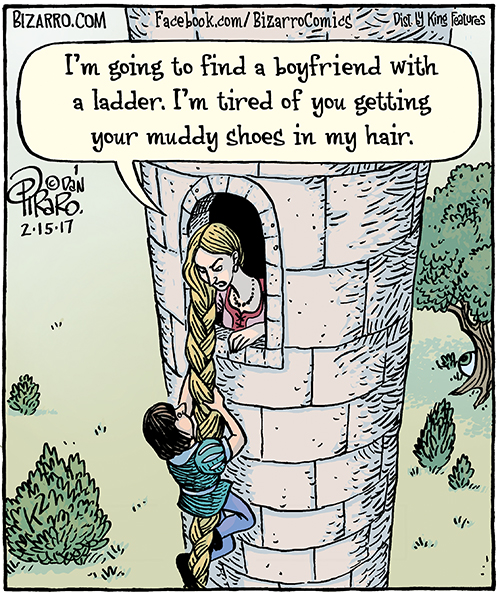 This one could have worked for V. Day, too, but whatever. While drawing this, I realized that the whole time I was a kid it never occurred to me that this lazy jackwagon of a prince could have brought a ladder and rescued Rapunzel instead of just climbing her hair three times a week for a quickie. But then again, maybe that fairy tale is actually about the male fantasy of having a woman at his disposal when he “wants” her, but not having to deal with her as a real person out in the world. Shame, shame.

My NearWife, Olive Oyl, has a nephew (my NearNephew) who goes by the suspicious name of “Ryan”. (See first paragraph above.) Ryan is around ten years old and on his most recent birthday he asked for “poop emoji” gifts. We attended his birthday party and the entire house was filled with more poop than you could shake a baby wipe at. Fortunately, none of them were of the “scratch and sniff” variety.

I got the idea for this gag after a friend of mine from Texas who goes by the totally fake name of “Brian Levy” suggested I muse over the idea of emojis painted on cave walls.

Out of all the Trump gags I’ve done in the past few months, this one about the Orange-Crested Trumpeter got the most hate mail. Numerous people used the tired, derivative, worn cliche along the lines of “Why have you never done a black Obamabird gag?”  Perhaps because he was not a proudly uninformed, racist, misogynistic, childish, cartoon bully?

One person accused us liberals and the media of making fun of the president and thus giving him less credibility to other nations and providing aid to our enemies. Right. That might have some basis in truth if the Pussy Grabber in Chief were not himself working 24/7 to be as idiotic a cartoon character as one could possibly imagine in a position of power. Jerry Lewis’s nutty professor character could command more respect worldwide. The only way to keep Trump from looking like an utter assclown to everyone outside of the less-than-25% of Americans who voted for him would be to lock him in an airtight box and bury it 100 feet underground. And I’m not entirely certain even that would work.

The most frightening email I got was from a woman who is convinced that God (the capitalization is hers) sent Trump to save America and that, yes, he is boorish, but God always sends flawed men to lead his people so that they will give the credit to Him and not the man. Wow. Still don’t believe there should be a simple I.Q. test you have to pass before you can vote?

If you think you can stomach it, have a look at this whining, childish, delusional “survey” the GOP has online to further convince the hillbilly portion of their constituency that there is a worldwide plot to make Trump look foolish. I’m certain that any Republican who can read without moving their lips would cringe at the adolescent nature of this kind of ploy.

Last cartoon of the week is a cowboy joke. With a chair.

A few readers have admonished me recently for doing political cartoons and commentary. They make a good point because Bizarro is not sold as a political cartoon and some newspaper editors object to my crossing over. By persisting, I’m jeopardizing my client list, which is still where I get the vast majority of my income. (I don’t get paid for posting cartoons online and I don’t have tons of licensed products like other cartoons.)

But I believe that the Trump presidency is so dangerous to our country in a completely unprecedented way that it is essential that all of us speak out against it in any and every way we can. Sheer numbers on social media may be the only way to get beyond the ideological bubbles we all live in online. Perhaps it won’t work, but this is too important not to try.

I think we must also continue to vocally express our trust in mainstream media sources like The New York Times, The Washington Post, PBS, NPR, etc. (Yes, they’ve occasionally made mistakes but, unlike the extreme right, they correct themselves and do the best they can to portray the truth.) It was, after all, the simple act of Fox News and its ilk repeating the mantra that “you cannot trust the mainstream media” that caused so many people to fall in line, lockstep behind a marketing effort that truly and demonstrably cannot be trusted. (Never mind the fact that there now is no more mainstream media than Fox News.)

If the majority of my readers really want me to drop the political cartoons and commentary, I’ll consider it, so let me know what you think. But if you value my ideas and humor and want me to continue in the direction I’ve been going in recent months, please consider buying my latest book (the others are out of print so I make no money from those that are being sold online) buying a color print from King Features or a limited-edition, signed and numbered print from QART, or making a one-time donation or monthly contribution to my efforts through my Tip Jar. I have already lost a few papers due to my criticism of the current administration and I will doubtless lose a few more.

Thanks for reading, Jazz Pickles. We’ll get through this together somehow!