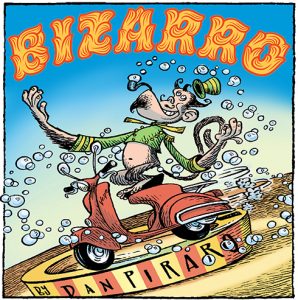 (To electronically embiggenate any image, turn the arrow thing on your screen into a pointy finger thing and poke it.) 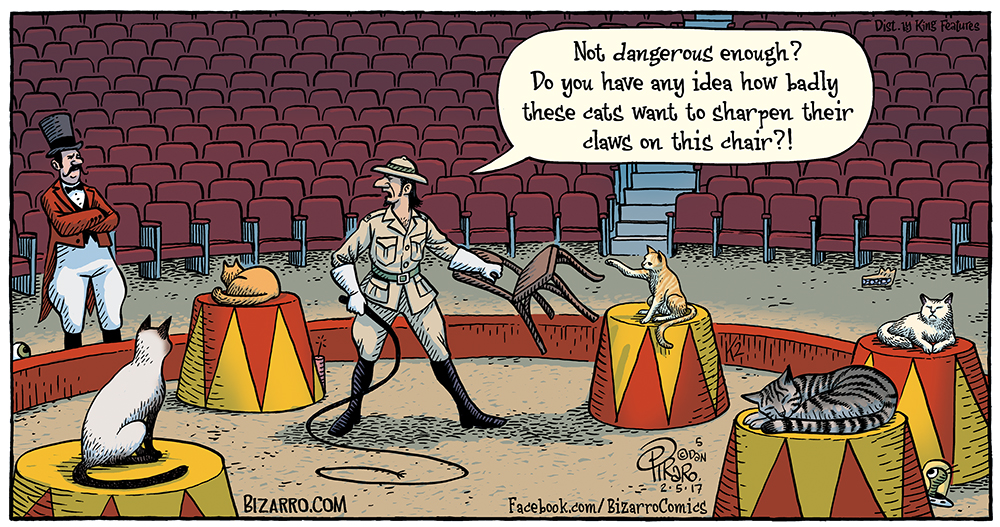 Bizarro is brought to you today by Is That So Difficult?

I confess I’m not a big fan of cats. I hope too many of you don’t hate me now. I mostly object to their habit of forcefully placing their fangs and razor-sharp claws into places I’d prefer they not be such as furniture, doorjambs, my flesh, etc.  However, I live with a cat that I have come to love because my beloved Olive Oyl loves her.

Another thing I do not care for is drawing theaters, auditoriums, and stadiums with multiple rows of seats and people. However, I do it when it facilitates a gag because my beloved Jazz Pickles enjoy it. The cartoon below is an example of such an instance. It was published in 2014, but I think it is even more relevant today as an allegory of the Trump administration.

(Embiggen it and see if you can spot the bunny and the moose.) 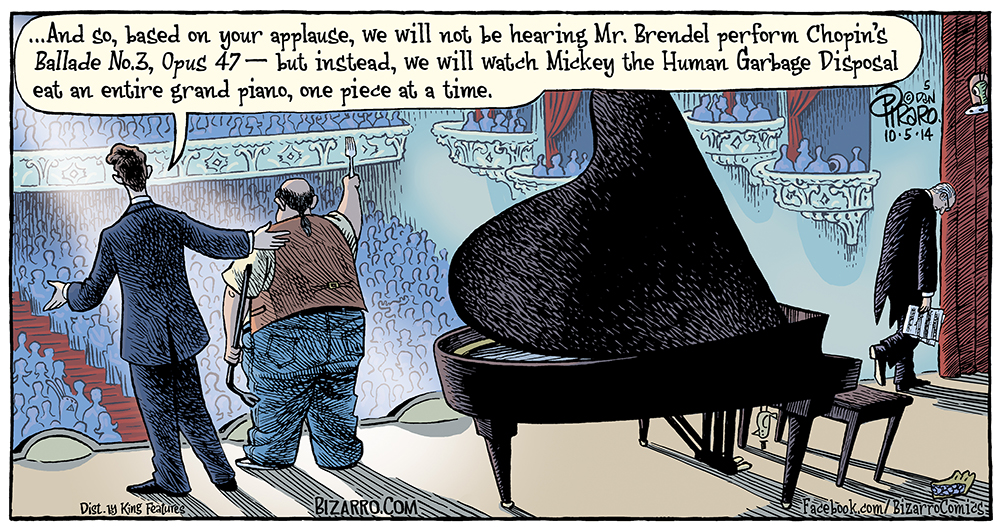 I think we all know what kind of hat Mickey the Human Garbage Disposal usually wears. 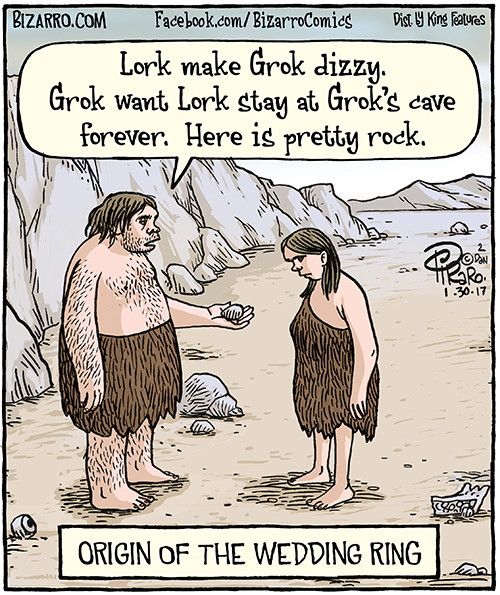 Wedding rings. I’ve never been a person to have any use for tradition unless it serves some purpose I can relate to. I’m okay with the basic symbolism of wearing a ring on a certain finger to signify that you are in a committed relationship. What I’m not okay with is the concept that it must be a diamond––a chip from a shiny rock that is not rare and that’s value is artificially inflated by the former monopoly practices of the deBeers company. Plus, there are all kinds of human rights abuses associated with the mining of diamonds in war zones in Africa, where many of them come from, including enslaved children working in horrendous and miserable conditions for almost no pay. A shiny rock created synthetically, however, is indistinguishable by the naked eye and you can be fairly certain that no slave children died as a result of its journey to your finger, but many people turn their noses up at those as not being “authentic”. If you’ve got a fiancee who insists on an overpriced rock that slaves died for, run away fast. This won’t be the last time you’re sorry you went on that second date, believe me.

Lastly, I find it fairly hilarious that there is a formula for how much you should spend on an engagement ring. It varies, but after a cursory google search, the average seems to be 3 months salary. Gosh. Where did that figure come from? Oh, the diamond industry. Well, I guess they should know what they’re talking about.

And if you don’t spend a painful amount on a shiny rock chip does it mean you don’t love her? What if you took that same money and used it toward a downpayment on a house, something you could actually use to build your life together and will likely be able to sell for the same amount or more someday?  Try selling an engagement ring sometime and see what percentage of your “investment” you get back. And keep the experience in mind the next time someone calls a diamond ring an “investment”.

By the way, the proper amount to spend on a piece of original cartoon art for your loved one is six month’s salary. Anything less means you don’t love them. I should know, I’m a cartoonist. 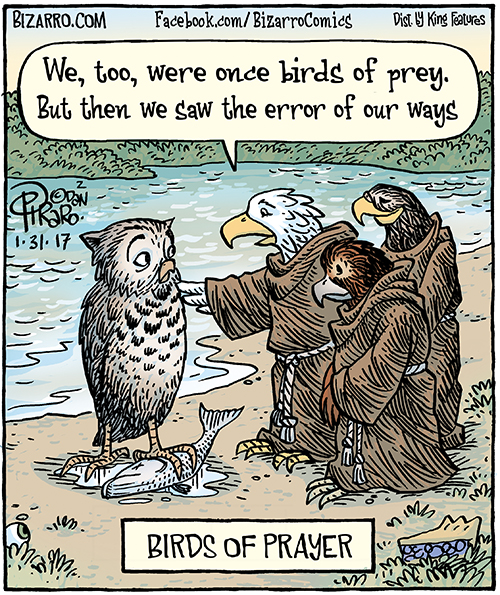 Some people complain that I’m hostile to religion (in general, they’re right) so I thought I’d toss them a lovely religious cartoon to warm the cockles of their soul. I don’t normally do “adorable” so cherish this while it lasts. 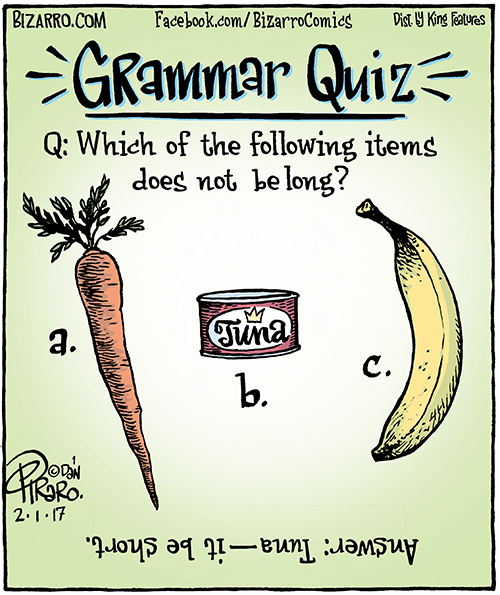 This cartoon got a fair amount of attention on FB this week. What I really enjoyed about it was that some people loved it, many could not figure it out and had to have it explained to them, and a handful complained because it is not actually about grammar, or they felt they had found a more logical reason why the tuna doesn’t belong with a vegetable and a fruit. One of my favorite things about creative expression is the tendency it has to be interpreted differently by each person. (Side note: I think the best argument for why the tuna does not belong here––other than the reason I gave in the cartoon––is that tuna is cat food, while the other two are appropriate foods for humans.)

The premise of this joke is a little dated now that everyone carries a cell phone and can call for help from anywhere, but I still enjoyed riffing on the old cliche. 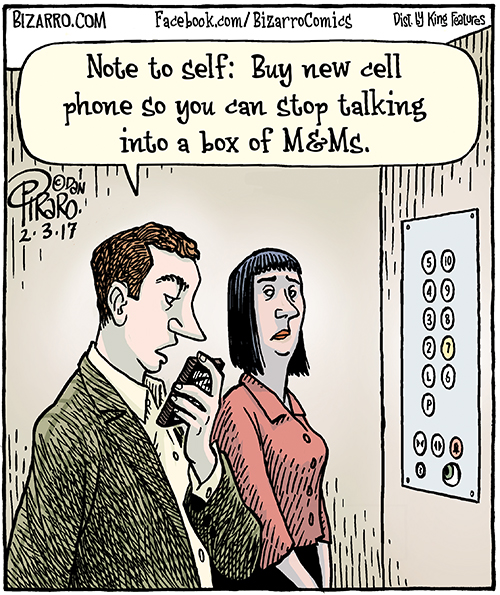 Sometime when you’re just the right amount of drunk, go into a crowded elevator in a fancy office building and do this. It’s tons of fun and you get all kinds of different reactions. Some people laugh, some ignore you, some ask if they can have an M&M. 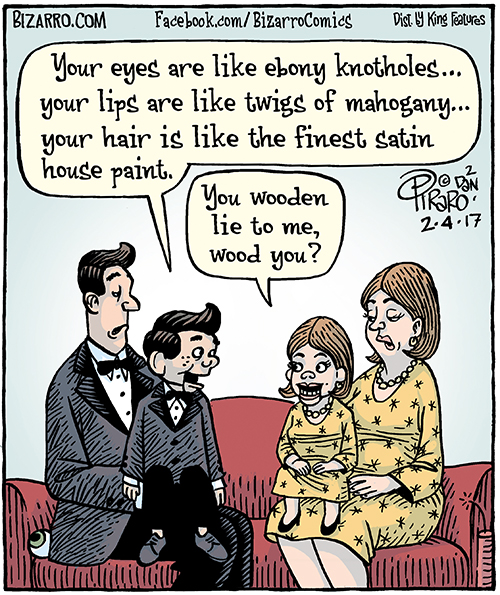 For some reason, I’ve been on a bit of a ventriloquist jag lately. I think I have another couple of jokes about them coming up in the next week or two. When I was a boy in the ’60s, ventriloquists were on TV a lot and I was fascinated by them. You almost never see them now but I still think cartoons about them are funny. Here’s one of my favorites from some year previous to this one. And here’s another one that still gives me a chuckle.

SUPER COOL SEMI-FINAL NOTE: My daughters, Krelspeth and Krapuzar, are going to be on the field during today’s Super Bowl. They are both super creative with costumes and parties and karaoke and anything having to do with having fun, and the younger one (Krelspeth) won a contest recently which allows her and a friend to be on the field during the Lady Gaga halftime concert. Neither of them give a baboon’s ass for football, but they both love them some Lady Gaga, so this is a super big deal for them. I’m just really happy for them and wanted to share with you guys. If you’re watching the show, keep your eyes peeled for two lovely young women who look vaguely like me, but without facial hair. Unfortunately, they were not allowed to wear crazy costumes or they most certainly would have.

NOT QUITE AS COOL: I’d be honored and personally enriched by about 25 cents if you bought one of my new books. It’s called a coloring book but you don’t have to be a person of color(ing) to enjoy it. It’s safe, fun, and inspiring for any age person and I guarantee you’ll think it is worth twice the $6 cover price. Grab a few extra copies for gifts, because if you buy four, I’ll make an entire dollar. Muchas gracias, mi Pepenillos de Jazz!