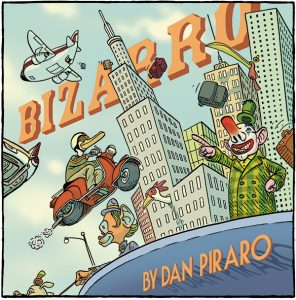 (To embiggenate a cartoon, click on any character’s ear.) 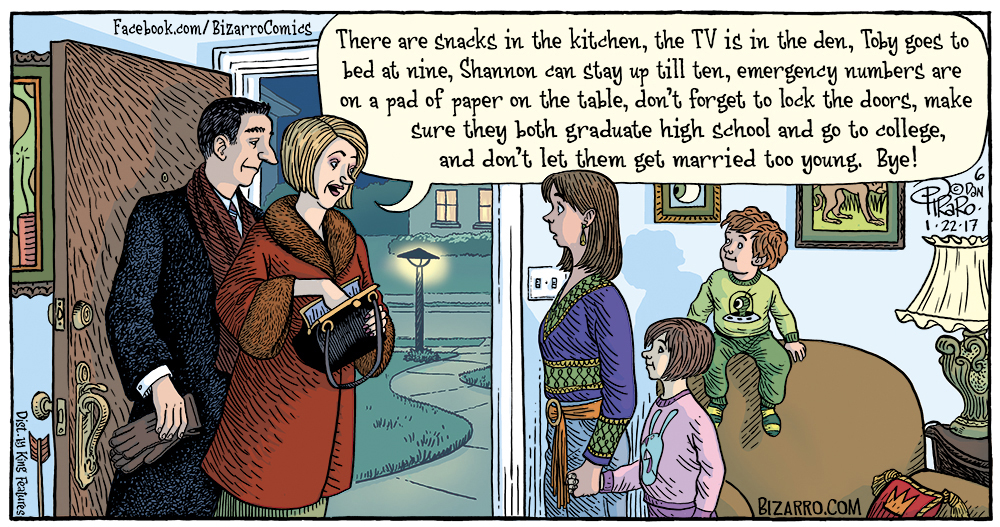 Bizarro is brought to you today by Marriage Statistics.

I often don’t comment on the title panel that appears at the top of each of my weekly posts but I’d like to say that today’s was cobbled together using a detail of one of the pages of my new book. It’s technically an adult coloring book (aimed at adults but safe for kids) but even if you’re not a person of color(ing) I have no doubt you will enjoy the fanciful hallucinations I’ve illustrated on every page. Here’s the full page that the title panel art was taken from. And here is where you can go to arrange for that and the other 30 pages of the book to arrive at your hovel. And, no, that price is not a misprint.

Regarding today’s cartoon about babysitting, one reader complained thusly:

“My family usually enjoy your cartoons but today made us sad to see that you are ecouraging [sic] irresponsible parenting. Shame on you, Bizarro!”

What this reader doesn’t know––aside from the fact that my name is not “Bizarro”––is that both of these parents are hardcore Fox-News-watching conspiracy nuts and are on their way to kidnap the Clintons and waterboard them until they admit that it was they who killed Abraham Lincoln, and not John Wilkes Booth as the lame-stream media has been telling us for over 150 years. What would be far more irresponsible would be to subject these children to their parenting skills.

(And seriously, would you call Charles Schulz, “Peanuts”?) 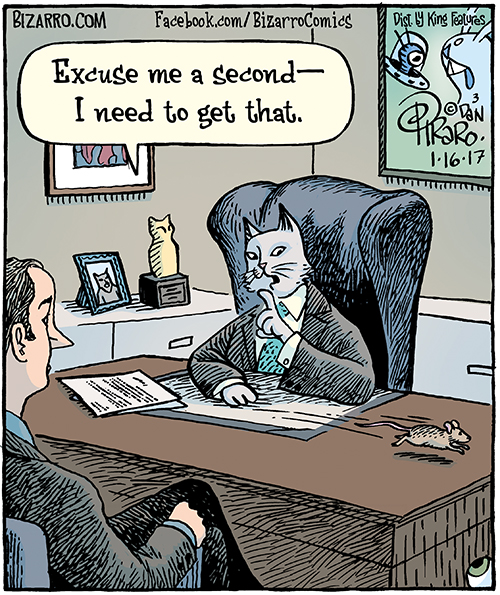 You may think that this cartoon is about a funny cat who is wearing a suit like a businessman and reacting to a live mouse the way a human might react to a ringing phone. But it is actually about the “Cat of the Year” award in the background that was given to him by the other cats who wanted to ingratiate themselves to him because he has so much money and power. In a perfect world, no way that cat wins Cat of the Year. Come on! 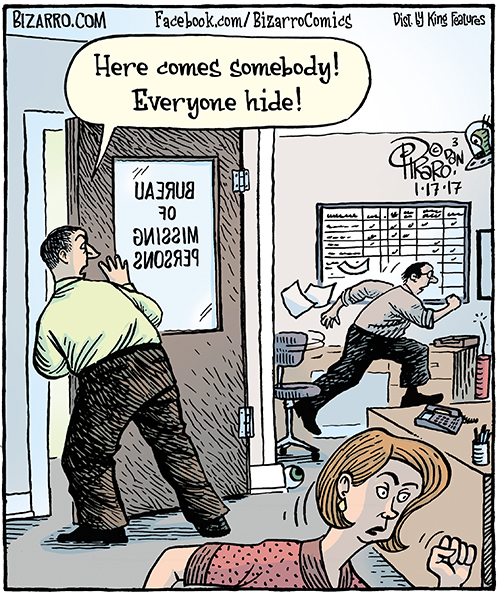 Oh my gosh. How surprised is the person heading to the bureau of missing persons going to be when they find that the people who work in that office are missing?!  Well, if they’d carefully read the sign on the door before entering, maybe they wouldn’t be. Stupid imaginary off-screen cartoon character. 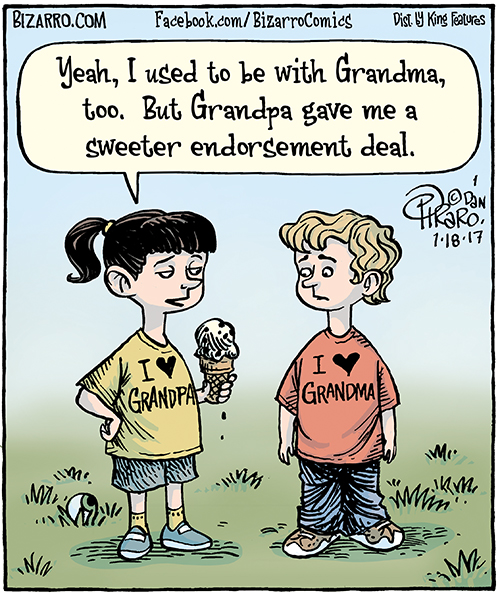 Since the real world was so devastatingly depressing last week, I thought maybe a cute cartoon about grandkids would be a welcome respite from the harshness of reality. Personally, I don’t think it helped. 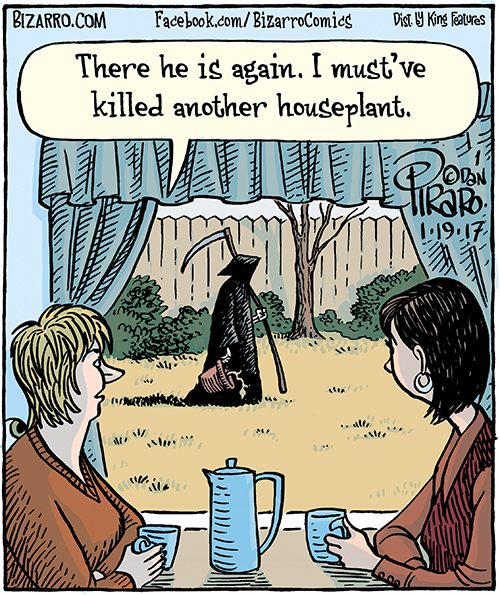 This cartoon about death may be in danger of bringing you down from the giddy high you got from looking at the cute kids in the previous comic. But don’t let it depress you; it is only a plant that died and not even a real one. Those are just pixels on a computer screen made to look a little like a plant. And the person inside the Grim Reaper costume is none other than TV’s Patton Oswalt, and everyone loves Patton Oswalt! (Seriously, if you don’t love Patton Oswalt, stop reading my cartoons. I don’t understand you.) 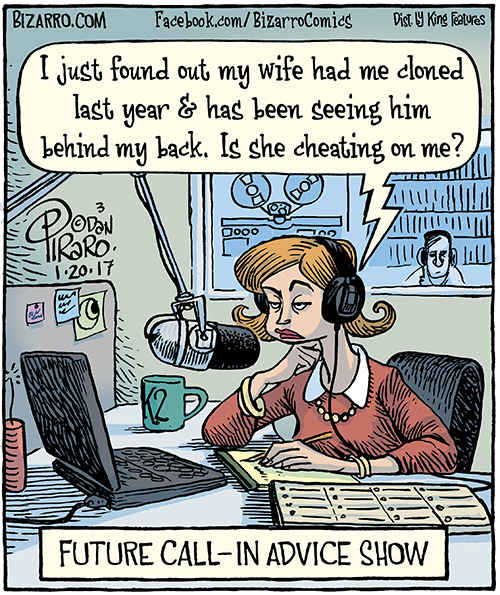 The topic of cloned humans makes me ask if you’ve been watching “Black Mirror”. Each episode is completely different, ala the 60s TV show “Twilight Zone,” and most of the stories are somewhere between chilling and horrifying in a yes-this-is-totally-where-technology-is-headed kind of way. Based on that show, I’d say artificial intelligence will be able to produce facsimiles of specific people before cloning ever gets approved by those in charge because our species is too superstitious to ever allow actual cloned humans. 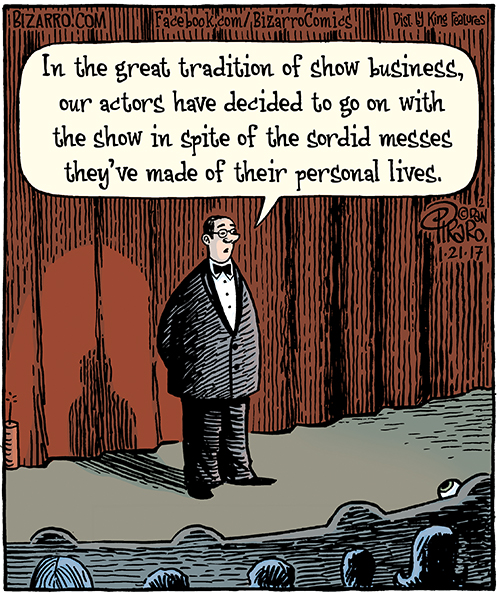 The thing I want to tell you about this cartoon is that the day it published, January 21, marked the 32nd anniversary of the syndication of Bizarro. My first cartoon appeared in less than ten American newspapers on Jan 21, 1985. Here it is. I don’t mind the joke, even though it is sort of a goofy pun, but the drawing is hideous to my eyes and makes me want to cut off the hand that drew it, set it on fire and float it down the Ganges. Fortunately, my drawing style improved.

When I first got syndicated I thought my ship had come in. “I’ll be able to quit my day job as an advertising illustrator because I will be rich very soon,” my brain said silently inside my head. What my brain didn’t know was that it would be another 12 years of working full time as a commercial illustrator and doing Bizarro at night after my kids went to bed before I made enough money to pull away from my day job. So, contrary to what many think, being a cartoonist is not the playboy-jet-setting, mansion-buying, cocaine-and-sex-orgy-party lifestyle you imagined.

The thing I remember most about the first year was how hard it was to come up with gags. Each time I wrote one I worried it would be the last idea I’d ever have. Fortunately, I found that joke writing was like pretty much anything else: practice makes it easier over time. BUT, if someone had told me during that first year that I’d be doing this daily for more than 30 more years, my head might have exploded. When you’re young, 30 years seems an eternity. When you’re older, it seems like 30 days.

And thanks to you for reading, by the way. Without you Jazz Pickles, my career would not have existed outside of my fantasies. It’s been great fun amusing you and I hope to continue for a while longer, unless I disappear into a canyon while riding my motorcycle in Mexico. Fingers crossed!