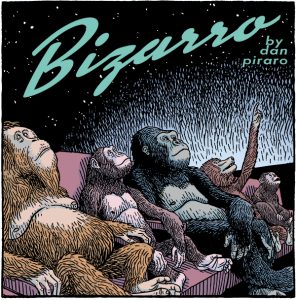 (Find yourself wanting more embiggenation out of any of these cartoons? This desire can be satisfied by the mere clickage of the images.)

Happy holidays and other things, Jazz Pickles! I hope you’re having (or have had) a lovely holiday month and that the good times will continue to roll into the new year. As a special holiday treat, I’ve put some of my favorite Bizarro holiday cartoons of the past behind the blue links in this post, so be sure to click those and claim your BONUS CHUCKLES––you’ve earned them! (Don’t ask me how you’ve earned them. I’m only pretending to know you.) Let’s start with this mash-up of competing mythologies. 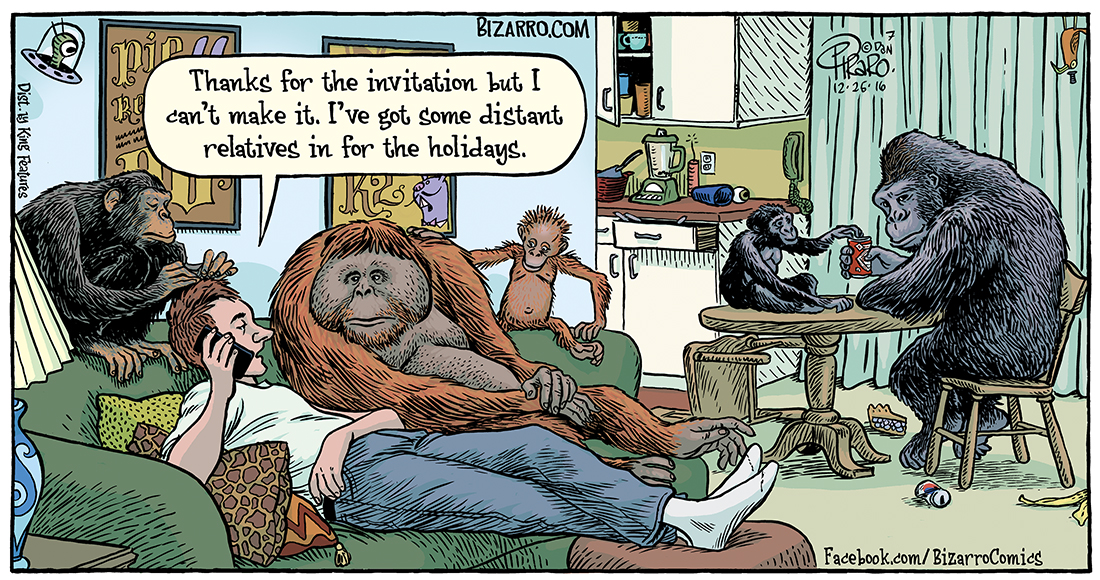 Bizarro is brought to you today by Holiday Heartbreak.

Have you ever noticed how much people resemble apes? Well, there’s a good reason for that. Scientists and other people who are way smarter than you or I have been insisting for over a century now that human beings are actually closely, biologically, genetically linked to apes. It’s not true, of course, and is merely another liberal hoax like climate change and Trump’s disdain for the working class, but if you tell school children long enough that they are related to monkeys, they start acting like it. No surprise there! 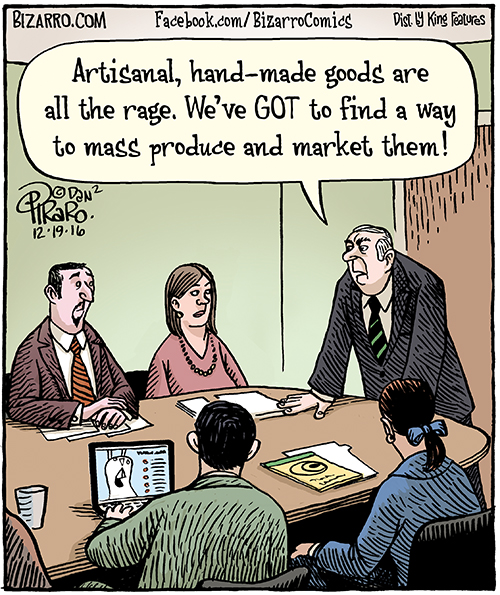 If you want to get someone a perfect gift, though, I stand behind this suggestion. 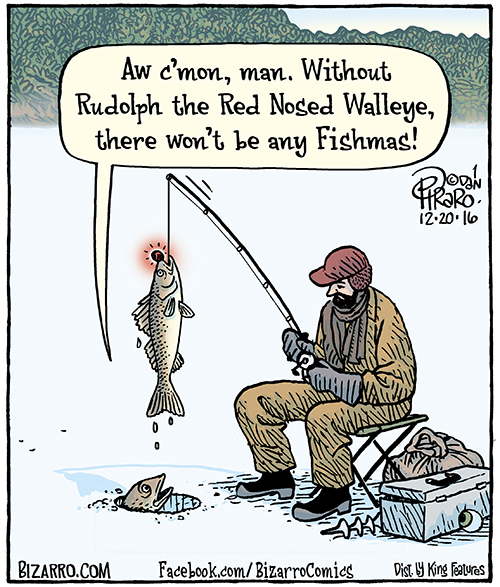 Some piscine psychologists say that when fish lie to their young about the existence Santa Cod, it erodes their trust and, therefore, their relationship. This can lead to problems later when the young fish is enticed by others in their school to engage in dangerous behavior like biting into sparkly, rubber worms dancing on a bit of fishing line just below the surface. 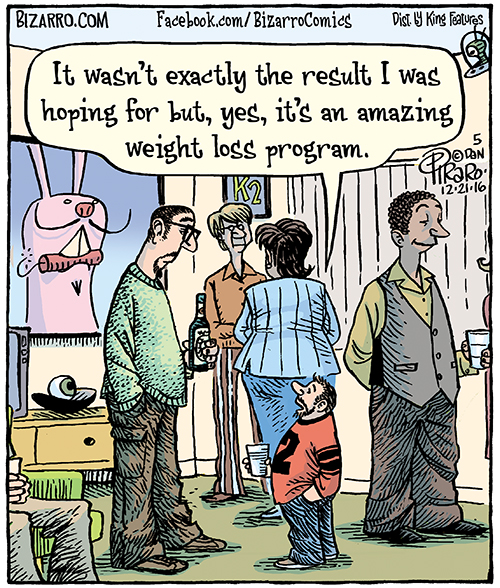 If you’re going to experiment with a surreal weight loss technique, the holidays is a terrific time to do it because it is a time of year when many of us gain a little extra weight. But another school of thought holds that a person heading into 2017 in a mere six days should hang onto that extra weight because there’s a damn good chance that the coming year will present multiple situations that will put you off your food for any number of days or weeks. Those few extra pounds might save you from physical collapse.

The family in this cartoon is using the holiday to discuss some of those possible scenarios. 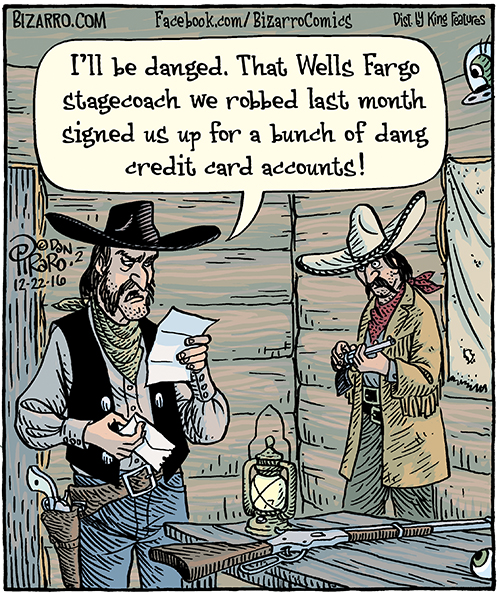 Remember waaaaaaay back about a month ago when Wells Fargo Bank was in the news for cheating millions of their customers? No? I don’t blame you. There are so many incidences of corporate malfeasance in the modern world that it’s pretty hard to remember them all. That’s all going to end next year as our new president “drains the swamp” and replaces it with muddy, murky water filled with crocodiles, alligators, mosquitoes and poisonous snakes. Yay!

One category of things that takes me months to get out of my head, however, is represented in this cartoon from 2007. 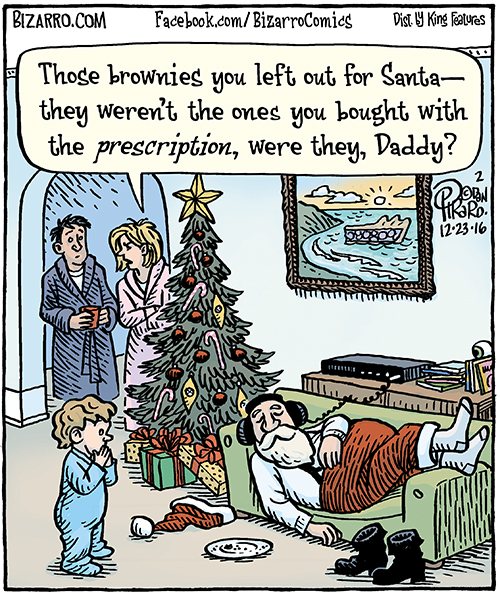 Lots of readers enjoyed this take on Cannabis Claus (not to be confused with Santa Cod, mentioned above.) Many suggested what music he might be listening to and the two most popular suggestions were Pink Floyd and The Grateful Dead. One of my buddies who is a Canadian activist for legal cannabis had similar thoughts and sent me this illegally altered version. Thanks, Russell!

But don’t get any ideas about altering my comics and posting them online. I hate it when people do that and it’s also illegal. BUT, when a friend sends me an altered version for my own amusement and then I CHOOSE TO POST IT, that’s legal and fine. I trust you understand the difference. If not, you probably need to smoke some more weed.

Sometimes people find other kinds of drugs helpful during the holidays, too. 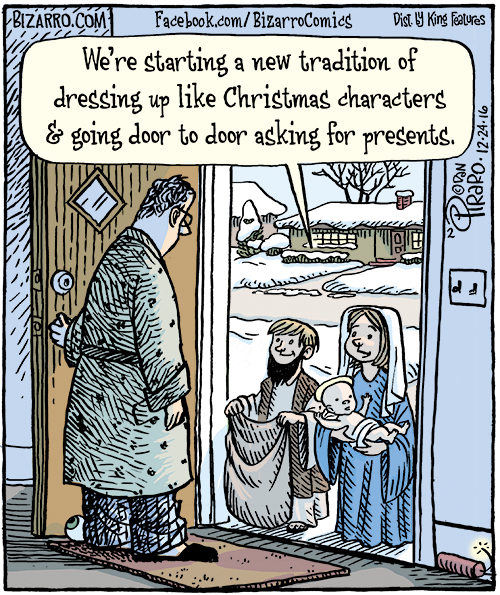 In some areas of America––the places where people believe that the stories of the Bible are literally true and historically accurate––children have begun dressing as Bible characters and going door to door on Christmas Eve asking for handouts Halloween style. This was started by parents who don’t let their kids participate in Halloween because they believe that Satan is a real person and that Halloween makes light of evil and therefore puts children in danger of pleasing “the Devil” and perhaps losing their eternal souls accidentally.

I’ve long been bewildered by the logic behind worshipping a supreme being who would allow his supposedly cherished creations to be tortured eternally with fire by accident; as though life were a board game by Milton Bradley and if you forget to draw your card from the stack before rolling the dice, you lose your turn and perhaps the whole game. “Them’s the breaks, kid. Sorry for the eternal agony but you dressed up like a witch when you were seven years old, so it’s out of my hands.”

By the way, everything in the previous two paragraphs is absolutely true except the part about the new trend of kids doing this on Christmas Eve. I made that part up. (But I wouldn’t be surprised if it happens.)

Meanwhile, in the big, bad, coastal, liberal cities, this kind of Christmas is more popular.

That’s it for this special holiday extravaganza edition of the Bizarro blog. I hope you enjoyed it and are having a terrific holiday, regardless of your beliefs or perspective. Have a great week and be nice to people.