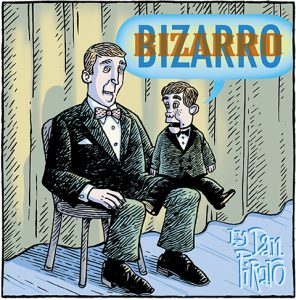 (They who wish to embiggenate these cartoons need only to click the nose of any character therein.) 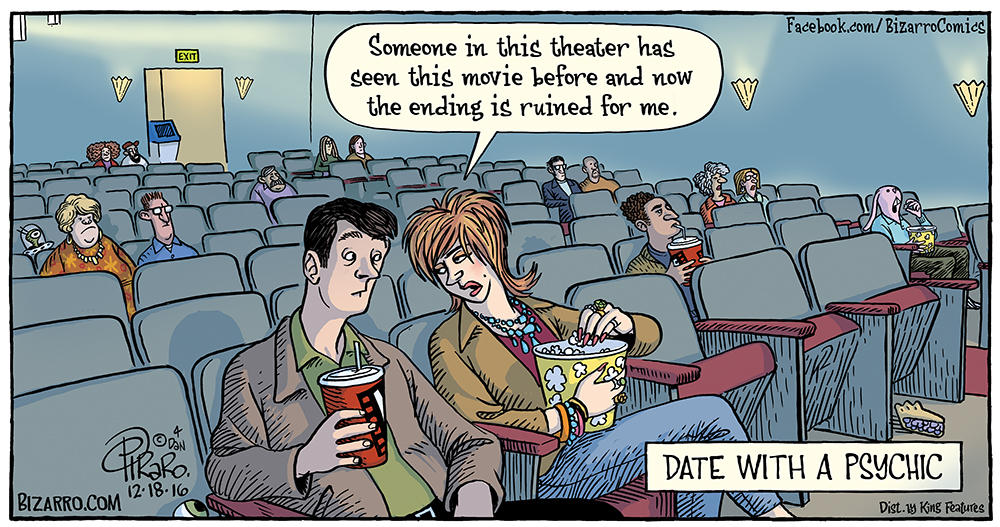 Bizarro is brought to you today by Nativity with Sauerkraut.

I don’t believe in psychic powers but I’m open to the idea that some might exist. I’m fairly comfortable with the notion that the vast majority of people selling themselves as psychics are either charlatans or self-delusional, but it’s always possible that the mind can do things we are not yet able to understand, so I remain sort of barely open minded.

One thing I know for certain is that humans have long had an insatiable fascination with the supernatural, mysteries, and conspiracies. I suspect this is part of our evolutionary track. With our unparalleled intelligence comes an uncanny ability to spot patterns and build stories from them. With this skill we have amassed an enormous amount of scientific knowledge about everything from sub-atomic particles to microscopic biological functions to invisible stuff happening millions of light years away. But that same drive to notice, identify, and explain is also what has led us to religion, belief in supernatural planes and beings, and fake news stories about conspiracies.

It’s clearly a double-edged sword. On the one hand we have all the cool stuff we’ve discovered and invented to make our lives more interesting, on the other hand, we are easy targets for con artists and larger, malevolent organizations that mislead the public into acting against their best interests by following bad politicians. (Fox News, the Trump camp, Breitbart News and their ilk.) Our own genius may prove to be our demise.

The cartoon above addresses none of that, however. It’s just an amusing look at the downside of psychic abilities. Personally, I think the lady in the cartoon is a phony because if she weren’t, she would have known ahead of time that someone who’d seen the movie before was going to be there to ruin her experience. 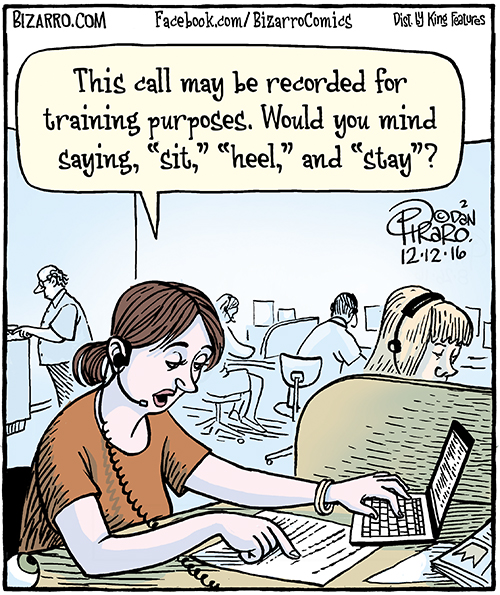 Would this cartoon have been funnier if the people on the phones had been dogs? Maybe. I’m not sure. 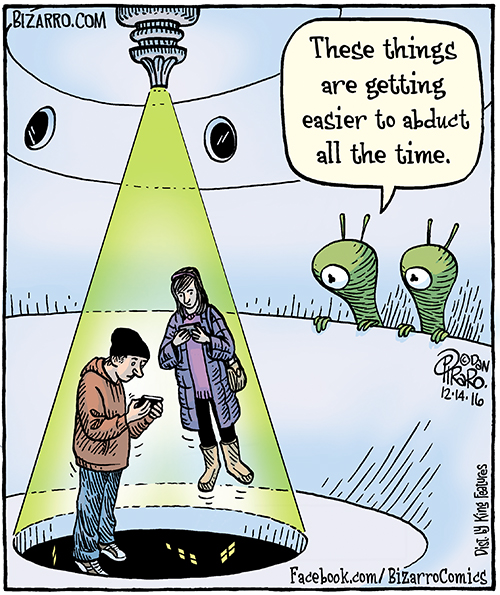 As much as I lament the fact that so many people spend so much time lost in the few square centimeters of their smartphone screens, I’ve come to rely on them, too.  I’ve been having a lot of trouble with my own mobile phone in recent weeks mostly, I think, because it is more than three years old and is designed to self destruct so I’ll buy another. I didn’t address this in the states before I moved to Mexico because I had heard from many other expats that the service here is the same as the U.S. but MUCH cheaper.

So a few days ago I went to the local provider with a translator, the sales person went through the whole rigamarole of options, I chose the one I wanted and got all the way to signing up before being told that they would not contract with me since I don’t have permanent residency status. With temporary residency status (a step above tourist status but below permanent status) you can easily buy a house and get a Mexican driver license, but you can’t buy a phone. Sure. Makes perfect sense. 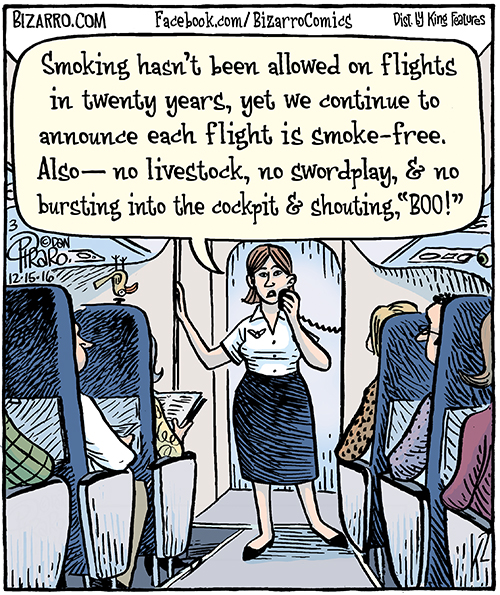 I’m sure stand-up comics have hit this subject before but seriously, when are they going to stop telling us we can’t smoke on commercial airline flights? Never? Would it strike you as overkill if every time you went through security at an airport the person who is shouting about laptops and shoes were to routinely announce, “Guns and bombs are strictly forbidden on commercial flights. Please deposit your weapons and explosives in the bin before going through the metal detector.” 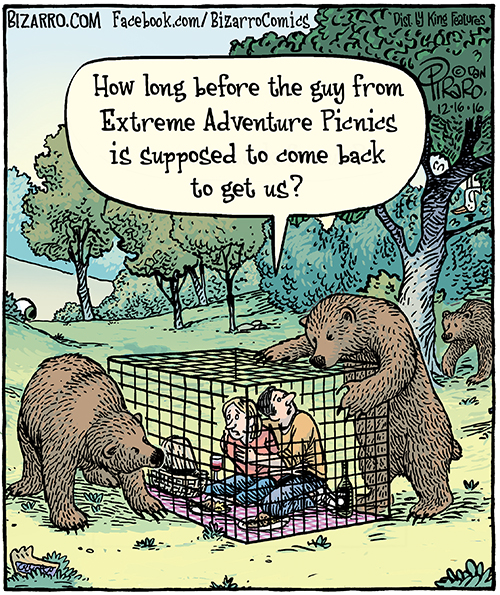 The never ending stream of weird ways in which we humans find to amuse ourselves gave birth to this cartoon. I can completely see this being a business model for some entrepreneur. Rich people and thrill seekers who’ve done everything else they can think of would be clamoring to have a picnic among grizzly bears. You can already pay to be lowered in a shark cage, can’t you? 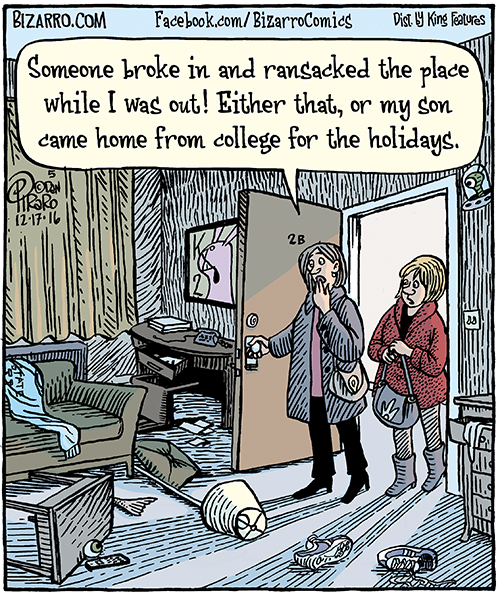 I thought this variation on the coming-home-to-find-you’ve-been-robbed theme was kind of fun. When my daughters, Krelspeth and Krapuzar were in college, I avoided the holiday hurricane by spending the holidays in their dorm room with them instead. 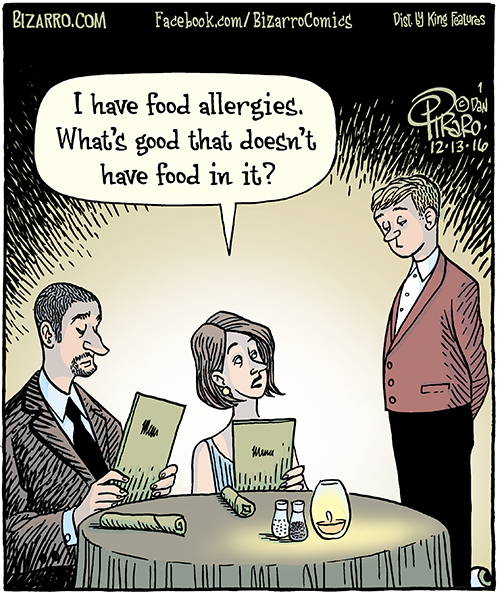 I know some people have actual food allergies and sensitivities so if that describes you, this cartoon isn’t about you. If, however, you know someone who just doesn’t have enough challenges in their real life so they begin to micromanage their diet in any number of trendy ways, this is about them. Not you. So when you leave a comment chastising me for making fun of your Crohn’s disease which is real and very much not funny, I’m going to tell you to go back and read this short paragraph. And, if history is any indication, this will happen.

That’s it for this week, Pepinillos de Jazz. I wanted to post some more pics from Mexico and write a bit about our transition but the camera on my phone died last week and I’m without. I could steal Olive Oyl’s pics but that would require time and energy that I don’t have right now. I’ll get to it soon, I promise. If no one is interested, of course, I won’t bother. I don’t mean to presume that you care about my personal life.

Have a great week and be nice to yourself and others.

Here’s a fun gift for yourself or others: My new coloring book which is fascinating and inspirational for humans of any age and which does not require an interest in actual coloring to be worth twice the cover price, which is a ludicrously low $5.99. I suspect the publisher owns a functional time machine because how else could they afford to sell them at that price unless their headquarters is in the past? It’s called “Bizarro Land Adult Coloring Book” and is available at your local bookstore and as well as all the online bookstores. And also here, directly from the aforementioned publisher, circa 1972.

And if you’d rather pay more modern prices, how about a limited-edition, signed and numbered, large, color print of one of my favorite Bizarro cartoons available from an art gallery in Los Angeles? Get those, and even more expensive original pen and ink drawings from Bizarro here.