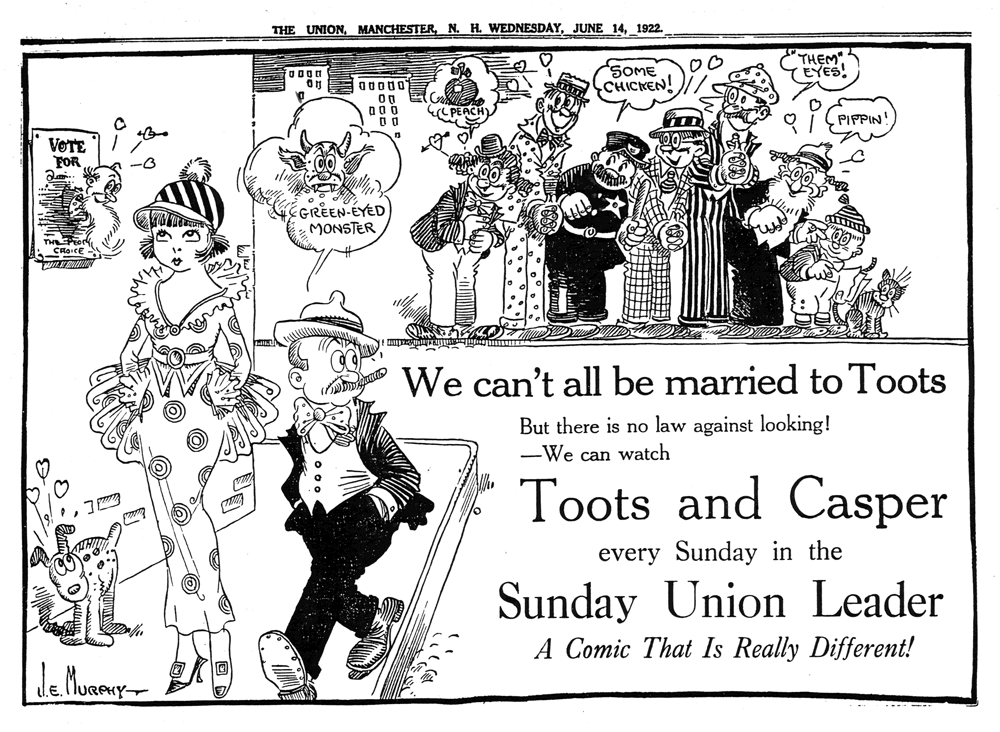 This month marks sixty years since the end of a strip not too many really talk about much any more – Toots and Casper by Jimmy Murphy (1891-1965). It was a longtime King Features series from 1918 to 1956.

Originally the character of Casper was a tiny, big-nosed little wimp with a tall blonde wife who hardly gave him the time of day. It appeared in The New York Evening Journal and possibly other Hearst evening papers.  This was a false start, lasting from December 1918 to May 1919. Then a redesigned version appeared, with Casper a normal-looking guy and Toots, now a brunette, had big eyes like Betty Boop, and they were much more compatible. They were both kind of dim-witted, but loved each other. Toots was a scatterbrain that loved clothes, and didn’t understand the value of money. Casper did, but he was apt to be ready to get into fights, or misunderstand signs or instructions.  He could also be henpecked whenever the gag called for it.  In July, 1919, a big push was made for syndicating the feature, one that was very successful.

One thing about Murphy was that he could change his strip when it needed changing. His style was a typical one of the day, but it does seem very close to Billy DeBeck/Frank Willard, which may indicate he studied DeBeck’s cartooning course sold in the years before World War One.

The young married theme reached its logical level in 1920 with the birth of their son, “Buttercup.” Yeah, Buttercup! Obviously, they must have expected him to become a prize fighter.  This gave the strip a new focus, especially in the Sundays, where the Caspers (originally the family escutcheon would have read “Hawkins”) would replicate the blinding devotion to their baby’s happiness seen years before in The Newlyweds and Their Baby. A big strange dog, “Spare Ribs,” was added for more family warmth.

I guess Murphy knew when he was getting stale and reconfigured Toots again as a blonde in 1923, then the thrust of the strip to a soap opera involving their relatives and neighbors. A leading character was eccentric Uncle Everett, who had to be humored.  If any of you are familiar with The Gumps, you might say this sounds a bit like Uncle Bim, who must be protected from scheming widows and the like. So maybe Murphy was making an uninspired choice. Melodramatic continuities were new and popular in the 1920s, and held up pretty well for many decades. I don’t know that the strip made a lot of new fans for it.  Murphy, however, loved to draw, and he was the one that initiated the cutout paper dolls and play money extras in the Sunday sections.  Today we’ll look at some material from the early years of the strip. 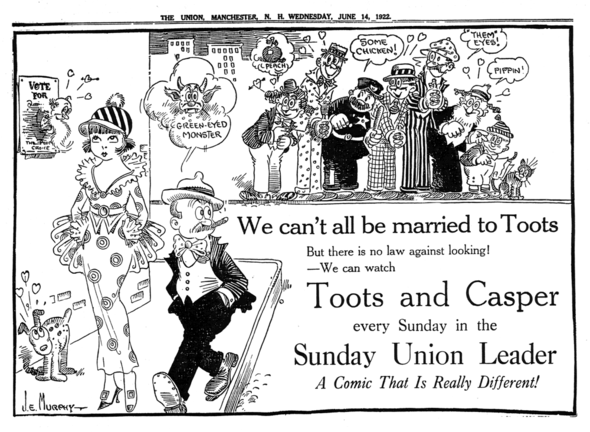 TOOTS AND CASPER in great half-page promo dating to the strip’s national launch in mid-1919, seen here advertising the short lived Sunday version of the Manchester, N. H. Union-Leader in 1922. They carried a ready-print second string Hearst section. Today the Union-Leader’s Sunday number is from another paper they acquired years later, the New Hampshire Sunday News. Maybe no run of the 1920’s Sunday U-L exists. 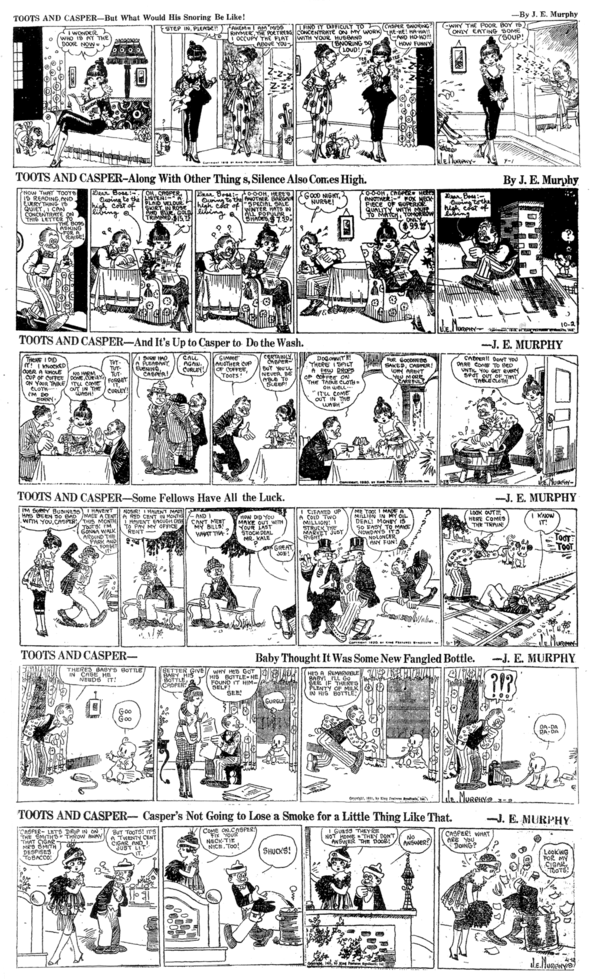 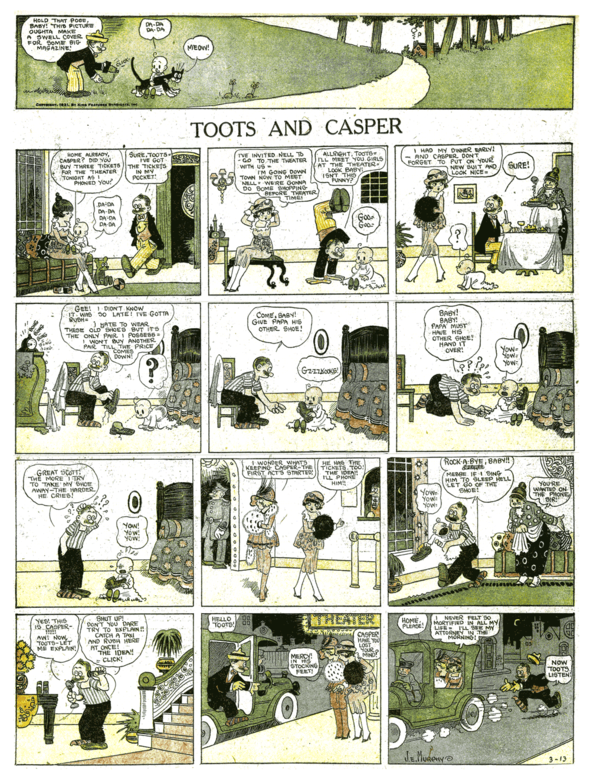 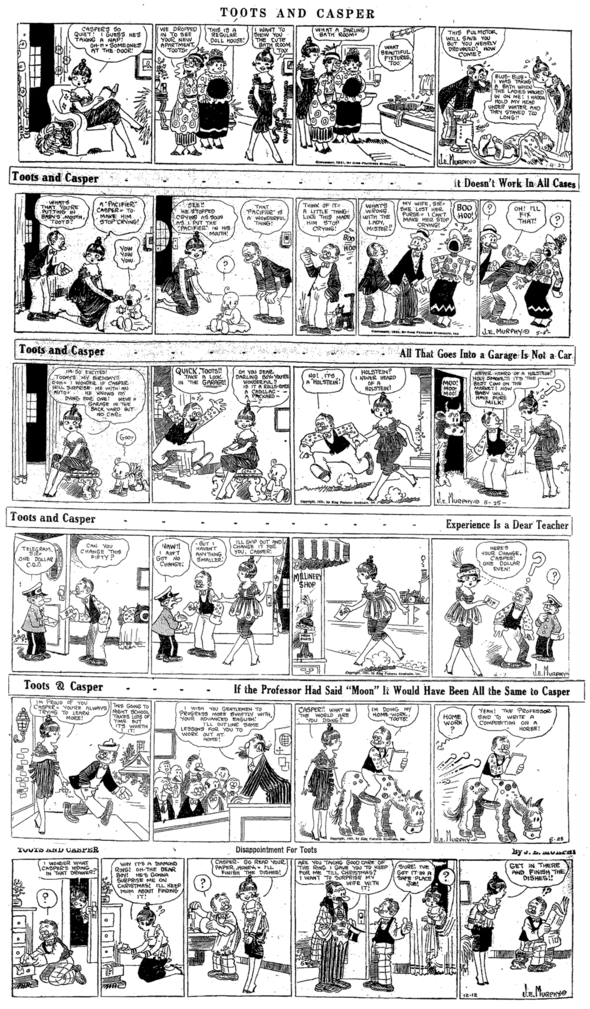 TOOTS AND CASPER Sunday, 6 March 1927, showing an episode in the feud between Uncle Everett and Uncle Abner. Top comic “It’s Papa Who Pays” lasted many years. 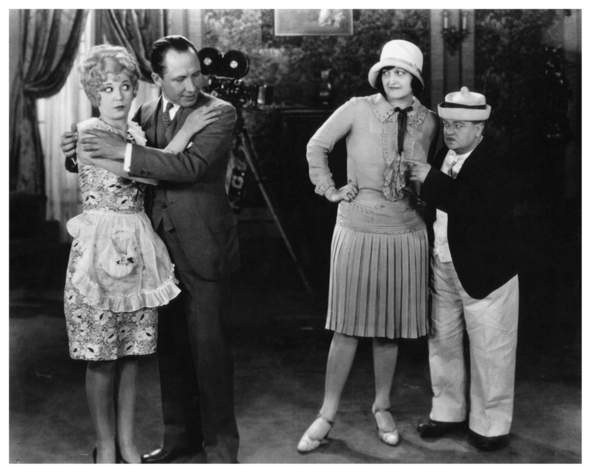 JIMMY MURHPY meets his creations in the flesh, that is, the flesh of Thelma Hill and Bud Duncan in the 1928-9 series of silent one-reelers produced by Larry Darmour. The lady with “Casper” is Mrs. Murphy. Bud would later play the part of Snuffy Smith in two Monogram grade-B features in the 1940’s.

And now, on to our Mail Bag — with apologies from The Archivist’s Editor. These responses to the November 17 blog should have been posted with last week’s blog:

I thank you much for the compliment. Always a pleasure to work with one of the greatest and longest-lived strips, Barney Google & Snuffy Smith.

As far as the live appearance of Lasswell goes, I believe he did a lot of such shows, especially in the South, where hillbillies are regional folk heroes. He would show up at the Florida state fair, for instance. I had, or still have, buried who-knows-where in the archives, some original art he did for the flop Knoxville World’s Fair in 1982, where he did the same talk and sketches for fans routine.

Maybe you aren’t in the minority of devotees of Miss Buzz Buzz. Perhaps John Rose will accommodate you with some new strips involving her. To me, she seems like a rather limited character to write gags for, but I’m sure the boundless imagination of Mr. Rose can rise to the challenge.

Our Mail Bag in response to comments posted about the November 24 blog:

The earliest I have found of Colonel Hoofer is 24 November 1924, which may actually be his introduction. It is definitely the first appearance of Spareribs, who at that moment was Hoofer’s dog.

Sure they gobble down ol’ Tom Turk in Albuquerque just like all good Americans. Where they run into trouble is that the name of their fair city is one of the only good words that rhyme with “Turkey”. All the rest are fitful specimens like quirky, smirky, and jerky.