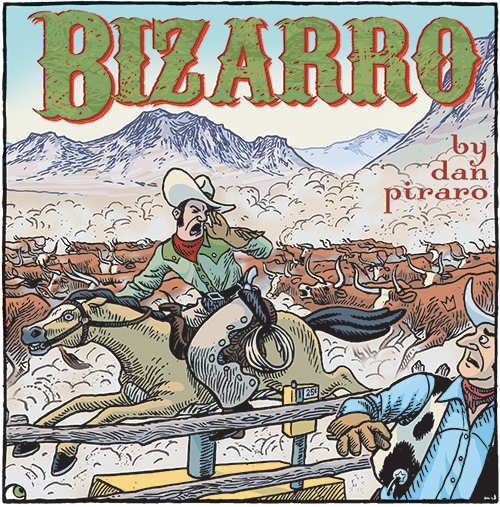 (To embiggenate any cartoon, move your screen closer to your face. Or just click the image.)

Bizarro is brought to you today by Beard Espalier.

The number over my signature in today’s Old West Extravaganza tells us that there are seven Secret Symbols to hunt for and I think I might have even gotten the count correct this time. Lately, there have been a spate of inaccurate symbol counts and I apologize for that. Like I used to tell my 7th grade math teacher, “What’s with your obsession with absolute accuracy all the time? Geez.”

This cartoon is a simple chuckle with no deep meaning. I have found lately, as have a slight majority of American voters, that reasons to laugh are a bit more difficult to come by. Who knows what the hell people who didn’t bother to vote are thinking. Hopefully they’re thinking that getting off their asses to register to vote online and then mailing in their ballot isn’t too much trouble to avoid the consequences of living in a country ruled by a con-artist, fascist thug. If they aren’t thinking that now, they likely will in the coming years. 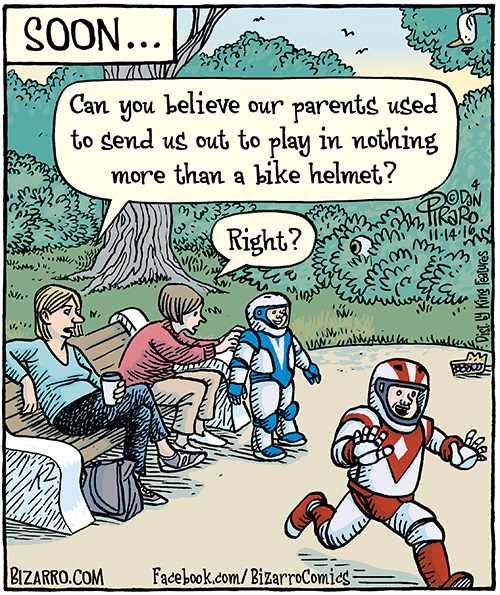 This cartoon about child safety raised a bit of a donnybrook on my FB page this week as people argued about how much hovering over our children is too much. Obviously, children are precious and you don’t want to risk losing one to a preventable accident. On the other hand, “helicopter parenting” can cause a child to believe the world is a deadly place and can make them fearful and fraught with anxiety for the rest of their lives. My own opinion falls soemwhere in the middle, I think; bike helmets and carseats are a good idea while slathering your kid with antibacterial lotion and putting them in full body armor is probably overkill. 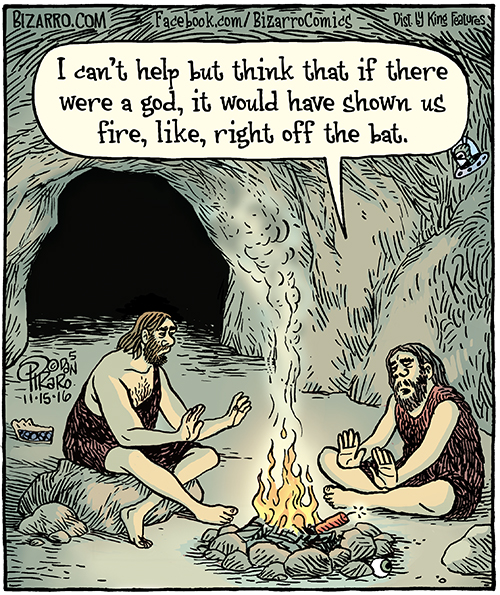 Here’s a cartoon I expected to get criticism for from uber-religious types, but so far, I’ve been wrong. I suspect my anti-Trump comments of late have perhaps chased all of those kinds of readers away.

I don’t pretend to know everything but some things are kind of obvious, I think. I’m not against the idea that the universe may not be entirely happenstance and that there may be some kind of universal connective force that holds things together in some thoughtful way––anything is possible––but I’m not one to believe in the kinds of anthropomorphic, anthropocentric gods that human cultures have invented and turned into religions. If that kind of god existed, it seems a no-brainer that it would have shown us fire at the very least. If the creation myths about god(s) having a similar relationship to humans as parents have to their children were remotely true, how do you justify tossing them into the wilderness without the slightest bit of guidance? It’s like having a baby and just abandoning it in the forest with a note that says “I created you. If you survive starvation, wild animals, and hypothermia and manage to grow up, come find me and tell me how awesome I am.”

You may notice that I routinely refer to “god” as “it” instead of him or her. That’s because I can think of no reason that such a god would need sex organs. 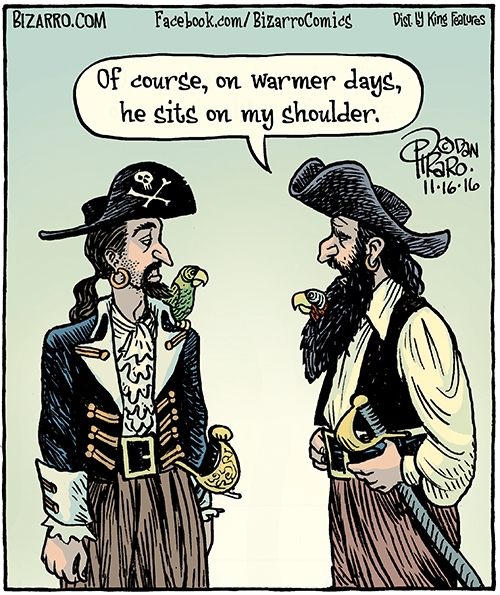 Here’s a cute little something about a funny little critter that has adopted a pirate. Another simple smile for a difficult time. 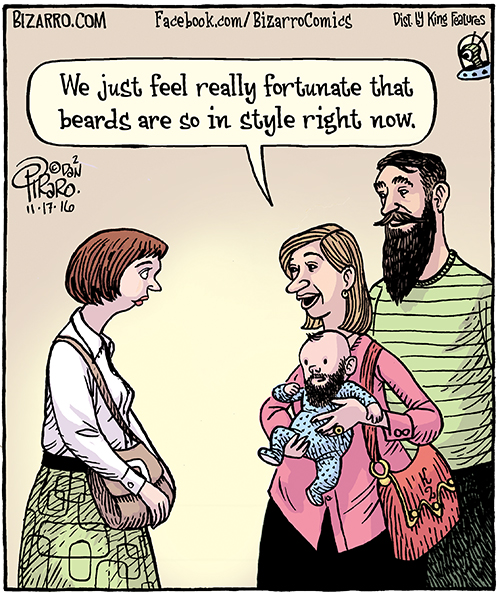 I guess beards were on my mind the week I wrote this batch of cartoons. I know it’s easy to make fun of all the trendy young men who are growing huge beards and mustaches these days but put me down as someone who really enjoys it. Since I first fell in love with art and history as a child, I wondered why men’s fashions had become so boring and couldn’t wait to be a grownup and wear more interesting clothing and eccentric facial hair. 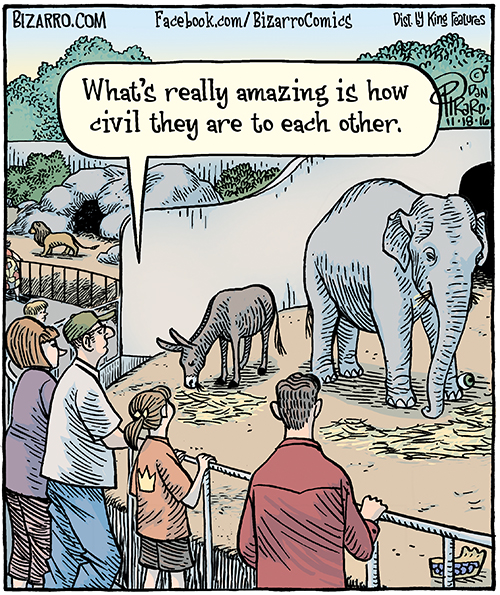 I wrote this cartoon before the election. It doesn’t take sides, per se, but was born out of my yearning for a more intelligent, dignified campaign season. I’m afraid those days are long gone for the time being. Meanwhile, hate crimes and school bullying is on the rise since Trump and his deplorable behavior have dominated the headlines. Tragic. 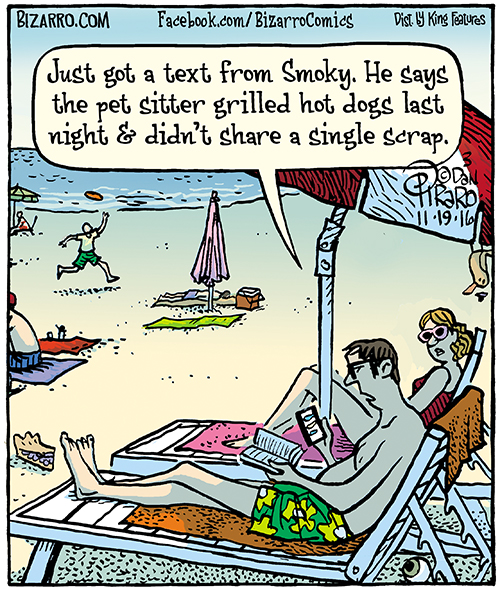 Last cartoon of the week is about a texting dog who didn’t get table scraps. Poor Smoky. Olive Oyl and I always worry a bit about how pet sitters are treating our cat and dog when we’re out of town. How I’d love for them to be able to tell us what their lives were like while we were away.

FYI: Below my holiday gift ideas, I’ve posted what I think is a short and fascinating excerpt from an article about our current political climate. Scroll down if you’re so inclined.

Thanks for reading, Jazz Pickles. There’s still time to order Bizarro holiday cards and get them in the mail to your fave peeps!

Here’s my new coloring book full of outrageous surreal art that is fascinating and inspiring to grown-ups and kids alike! Also available at your local bookstore or any online book stores. ($5.99 each. No kidding!)

Prints of Bizarro cartoons make great gifts, too! Get them from Bizarro.com by using the calendar function below the cartoon at the top of the home page to pull up the image you want, then clicking the “Buy Prints” link below. ($30 to $100)

ONE LAST FASCINATING POLITICAL THING: Like most Americans, I’m dead sick of politics so I tried to keep it out of this week’s commentary, without much success, I’m afraid. But I came across a fascinating passage in an article in the current (Nov 28, 2016) issue of The New Yorker that gave me chills. A philosopher in the late 90s eerily predicted exactly where we are now, 18 years in advance. Just wanted to share it. This excerpt is from an article by David Remnick entitled, “Obama Reckons with a Trump Presidency.”

Before and after the election, a passage from Richard Rorty’s 1998 book, “Achieving Our Country,” circulated on social media. Rorty, a left-leaning philosopher, who died in 2007, predicted that the neglected working class would not tolerate its marginalization for long. “Something will crack,” he wrote:

The nonsuburban electorate will decide that the system has failed and start looking around for a strongman to vote for—someone willing to assure them that, once he is elected, the smug bureaucrats, tricky lawyers, overpaid bond salesmen, and postmodernist professors will no longer be calling the shots. . . . One thing that is very likely to happen is that the gains made in the past forty years by black and brown Americans, and by homosexuals, will be wiped out. Jocular contempt for women will come back into fashion. . . . All the resentment which badly educated Americans feel about having their manners dictated to them by college graduates will find an outlet.

It’s going to be a bumpy ride, folks. Good luck to us all.