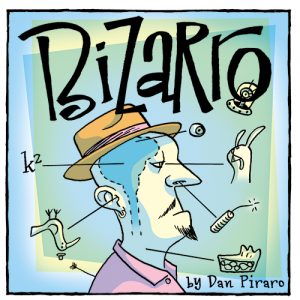 (A most rewarding experience awaits you when you click an image to embiggenate.) 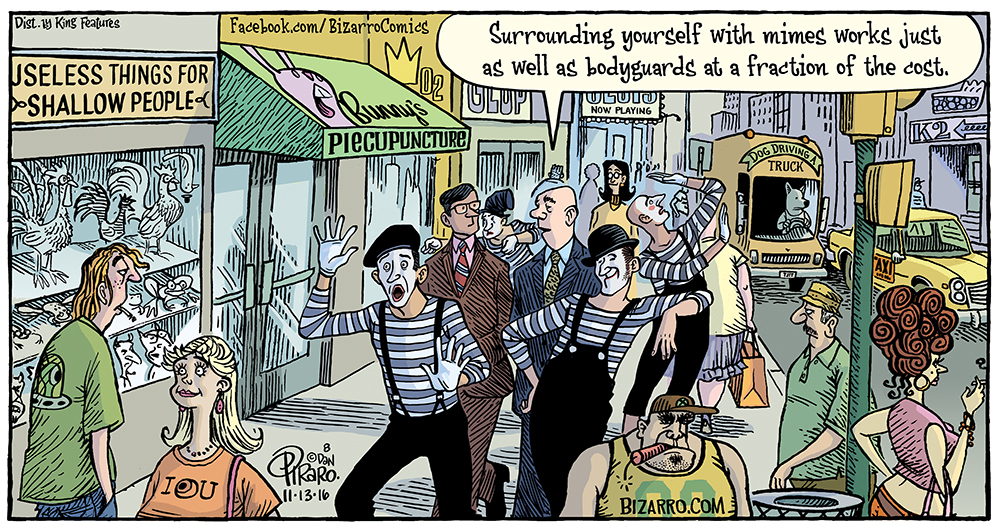 Bizarro is brought to you today by What Exactly Are They Suggesting?!

Today’s cartoon has 8 secret symbols and a handful of background gags that are fun, so you’ll want to embiggenate it. (My favorite background gag is the truck.) The main gag is a bit of a populist joke––to borrow an oft-used term of late––because most people seem to dislike the cliche, public street mime, the sort I’ve depicted here. I’ve long been on record as a person who finds that clowns, mimes, and street performers of all kinds just make me uncomfortable. I go out of my way to avoid and ignore them. My apologies to any readers who are street performers. I don’t mean to disparage your chosen career or hobby, it just doesn’t work for me. Kind of like door-to-door evangelists.

Because I’m moving out of the country in less than three weeks, I’ve been working well ahead on my deadlines for quite a while. As most fans of newspaper cartoons know, even when working right up to deadline, we’re required to submit our work several weeks ahead of the date they print. (That schedule doesn’t apply to editorial cartoonists, for obvious reasons.) So even though this week of cartoons was written and drawn many weeks before the election, I accidentally tapped into a number of themes that resonate more now than when I submitted the gags.

The cartoon above was written about people disliking their day job but working it because they need to. Posting it here just now, however, I noticed for the first time that it could be seen as representing the general experience of women in the workplace, and one very notable woman’s experience last week. Of the multitude of things that bother me about our recent election, one that looms large is this: Of all the things you can say about both candidates and their many suspected wrongdoings, it is undeniable that in our society when a man breaks the rules as he claws and scratches his way to the top, he’s seen as a tough, ambitious son of a bitch who gets things done––a leader. When a woman does the same things, she’s a bitch; a witch to be burned at the stake. Women who have worked in corporations know exactly what I’m talking about.

And regardless of the list of things some Americans believe Hillary has done, one can easily argue that they are not as bad––or at least no worse––than what Trump has done. Yet millions of people despise her and admire him. This is a kind of deep-seated, subconscious misogyny that I believe stems from basic tribalism. Whether it manifests in the form of xenophobia, elitism, misogyny, or racism––as it did with the anti-Obama birther movement–– it is a gut feeling that says, “you’re not like us, you don’t belong here.” This kind of tribalism is an ugly and difficult thing to defeat. 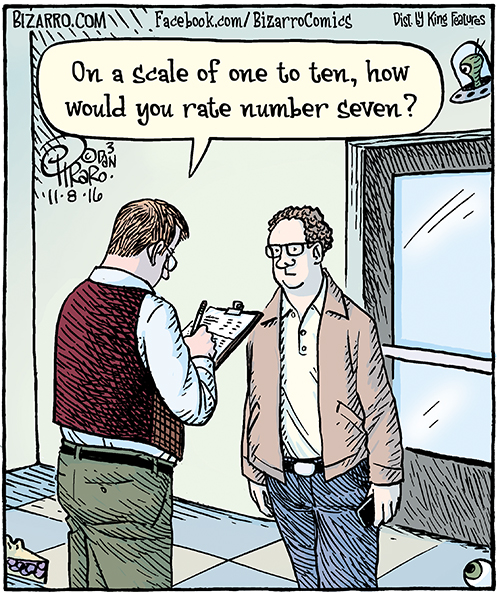 Here’s a gag I did just to for a chuckle. Stupid questions amuse me. But looking at it now, it can be seen as a cartoon about how utterly inaccurate and worthless polls have become. 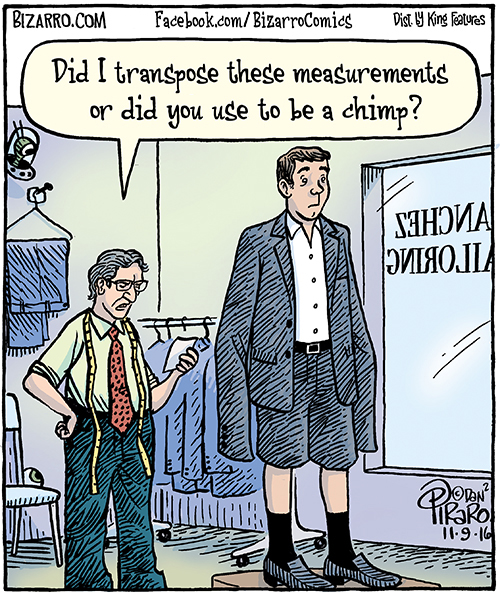 No idea what made me think of this gag but a reader commented this week that something very like this happened with a groomsman in his wedding: the tux shop transposed his waist measurement with his inseam and the end result was super-short pants with a gigantic waist. 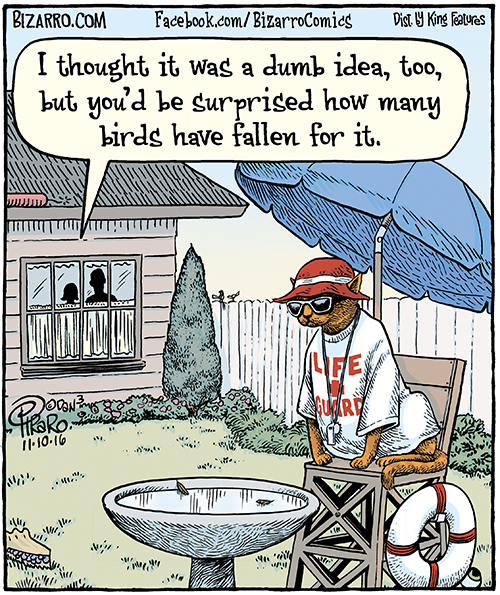 Here’s another cartoon that I wrote just for fun but also turned out to be prescient. In my original version the cat was gray, but make him orange and you’ve got a perfect allegory for what Trump has pulled off. Which brings me to one of the other things that bothers me most about this election.

My heart truly goes out to the millions of desperate, blue collar workers who trusted that Trump would help them. It is clear he will not. A seventy-year-old man who has made a fortune victimizing blue collar workers for the entirety of his life does not suddenly care about them; especially when he’s already gotten what he wanted from them. Trump is a master salesman and he said what he knew folks wanted to hear.

Sadly, though, manufacturing jobs will not come back in large numbers (because the vast majority were lost to technology, not China, and Trump knows that) our health care costs will not go down, taxes will only be lowered for the very rich, and no help will arrive for the downtrodden because Republicans don’t believe in programs to help the average person. (Go ahead, try to name one.) Also, no wall will be built to keep out illegal immigrants, Hillary will not be sent to jail, and ISIS will not be defeated in the foreseeable future. You have a better chance of getting those things from Santa Claus this Christmas than you ever will from the Trump administration.

People who voted for him thought they were voting against “the system”. Trump IS the system and the next few years will bear that out. And when I say my heart goes out to the people who voted for him (the ones who did so because they are desperate, not the racist ones) I meant no condescension. It is cruel and unfair to play on the emotions of people in need. I once saw a TV evangelist (Robert Tilton, 1982) tell his viewing audience, “Somewhere out there is a couple whose child has cancer. God wants you to pledge $1000 to him right now.”  Playing on the emotions of people in crisis is among the lowest things a person can do.

Hey, here’s some good news! This cartoon doesn’t remind me of politics! 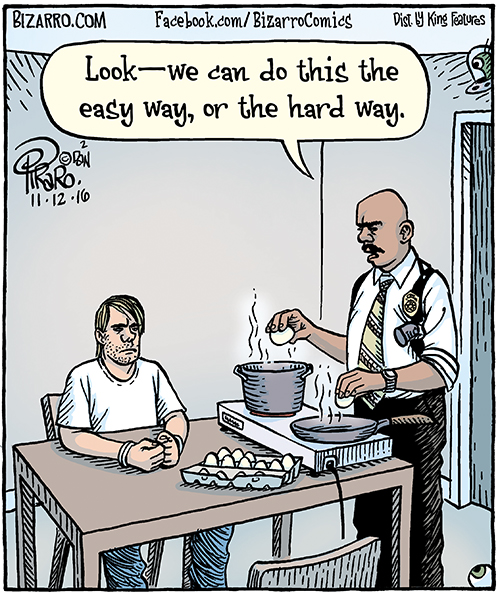 Here is my favorite gag of the week, and it has nothing to do with politics, either. YAY! Regular Jazz Pickles know that I love taking cliches and finding surprising, new angles on them. This is one of those cartoons and I’m still getting a good chuckle out of it. Before you start sending me your own ideas about how to illustrate a common phrase, remember that surprise is the key element. If you do it in any way that the readers think they could have come up with on their own, they just groan. So remember this pro tip: Surprise is the difference between a good pun and a groaner.

Thanks for reading, Jazz Pickles. There’s still time to order Bizarro holiday cards and get them in the mail to your fave peeps!

Here’s my new coloring book full of outrageous surreal art that is fascinating and inspiring to grown-ups and kids alike! Also available at your local bookstore or any online book stores.

Prints of Bizarro cartoons make great gifts, too! Get them from Bizarro.com by using the calendar function below the cartoon at the top of the home page to pull up the image you want, then clicking the “Buy Prints” link below.