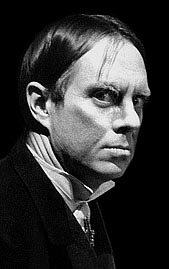 As kids growing up in NY we had the best television. Everything from westerns to the Mickey Mouse Club… but the best of all were the  horror movies hosted by John Zacherle or “Zacherley” as he was known and also called “the Cool Ghoul”. He was witty and inventive and would interrupt the low budget films to comment or create his own action that was more fun then the movie. Whether wearing a pith helmet or cutting up a brain (or cauliflower) laughing throughout, he commanded your attention and devotion. I had a huge crush on him. I mean, he was very striking, in make-up or without, and that voice!!! He was 98 when he died, somehow, fittingly, during the lead-up to Halloween. A loss to his fans everywhere.