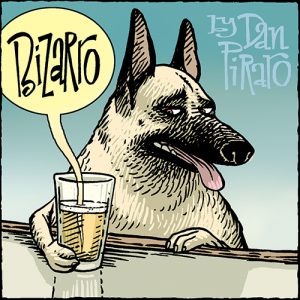 (Colonel Firmstool, the Bizarro mascot dog shown above, wishes to remind you that a simple click to the hindquarters of any character in these cartoons will result in embiggenation.) Bizarro is brought to you today by The Beauty and Grace of Synchronized Diving.

You’re going to want to embiggenate today’s pet shop cartoon because it has 8 secret symbols and six or seven small background jokes that have been specially formulated to curl the edges of your mouth upward.

And if you enjoy the kooky character drawings in this cartoon, you’ll flip out over the wackymonkey nonsense I filled my new book with. You don’t have to enjoy coloring to get a lot out of this book. Each page will lead to hours of mind-bending gazing and save you a fortune on recreational drugs! (The book is completely appropriate for all ages, by the way, though some recreational drugs may not be.) Here’s another sneak preview of a page. 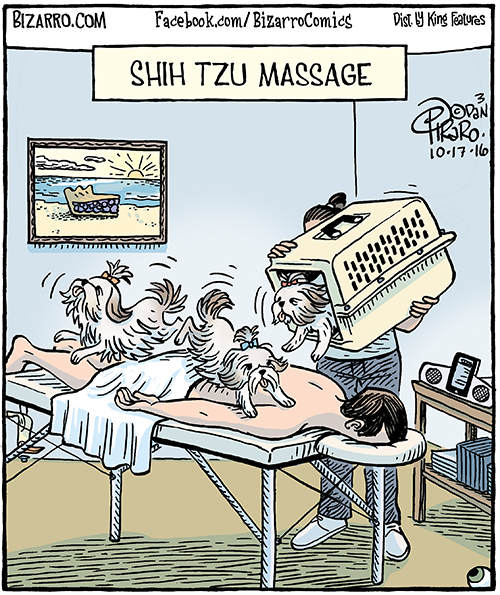 I’m a big fan of dogs as a species but because I want to have a good relationship with you and I believe that the quality of any relationship hinges first on honesty, I’m going to be completely honest and tell you that I’m not a big fan of the Shih Tzu. When I look at their long, prom-dress fur, the almost ubiquitous bow on their head, and their little upturned noses, I cannot see how they descended from wolves. No chance. In fact, I think it is highly unlikely they are the product of any biological process whatsoever and are probably the result of a magic spell of some kind. One thing I do like about Shih Tzus, however, is their name. Because it sounds a little bit dirty. 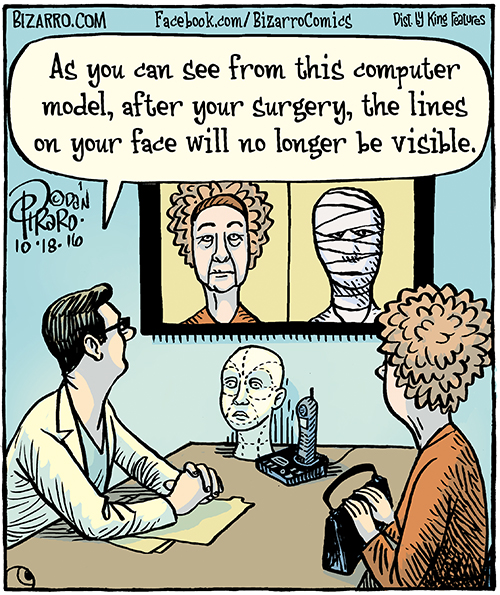 I live in the Los Angeles area where pretty much everyone who makes more than minimum wage has had cosmetic surgery. I understand the temptation; almost anyone over a certain age begins to regret the creeping failures of the flesh. But asking a stranger to slice you up like a pumpkin and glue you back together again so you’ll (temporarily) look (a little) like you did 7 years ago seems like a losing game. As we all know from certain celebrities who have played too much in that particular sandbox, eventually they look like figures from a wax museum that were placed too close to the heat vent. This cartoon tickles me because it lampoons the various social media trends like #ManicMonday, #ThrowbackThursday, #FaintSmellOfRottingFigsFriday, etc.  I’m aware of these things but I don’t participate in them very much because I stubbornly insist on living in the natural world, the one that existed before the Internet and has living, breathing flora and fauna. Old timers sometimes call it “the real world,” but based on certain areas of philosophy and physics, I’m not prepared to go quite that far. That’s not to say that I don’t appreciate your stopping by my cyberhouse here at Bizarro.com to read these cartoons and comments, of course. #ArrogantHypocrite 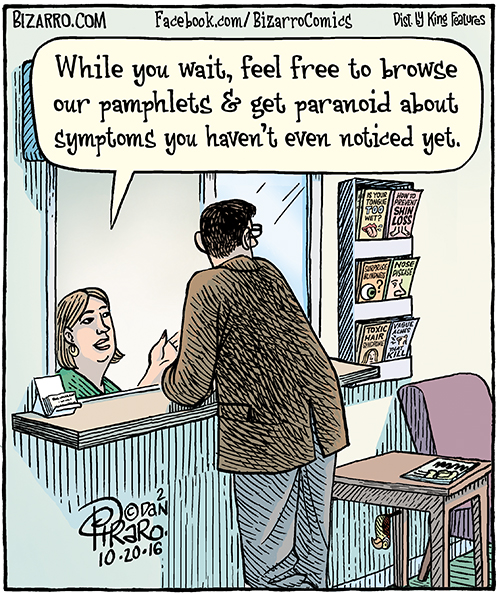 Here’s another fun cartoon for embiggenation because, once again, I’ve placed some fun background gags in it in the form of medical pamphlets. Here’s an enlarged view of the pamphlets for your amusement. 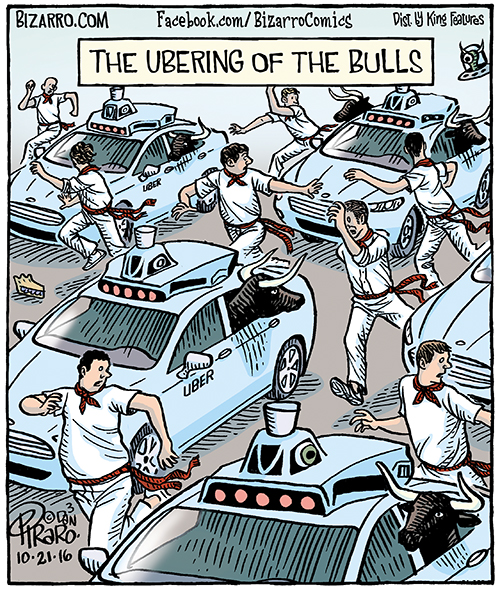 I quite like this cartoon about the famous Running of the Bulls in Pamploma and other towns. In its traditional form, a group of bulls is herded from the countryside where they are raised, through the streets of town to the bullring, where they will die in a cruel and gruesome manner later that day. I see it as a barbaric practice leftover from archaic times, like gladiators fighting to the death and other forms of bloodsport, and wish bullfighting would be outlawed worldwide. Progress is being made along these lines but we’re not there yet. The good news is that even if bullfighting is outlawed, they can still herd bulls through the streets and let people test their courage and reflexes by running along with them. I see it as a form of natural selection. 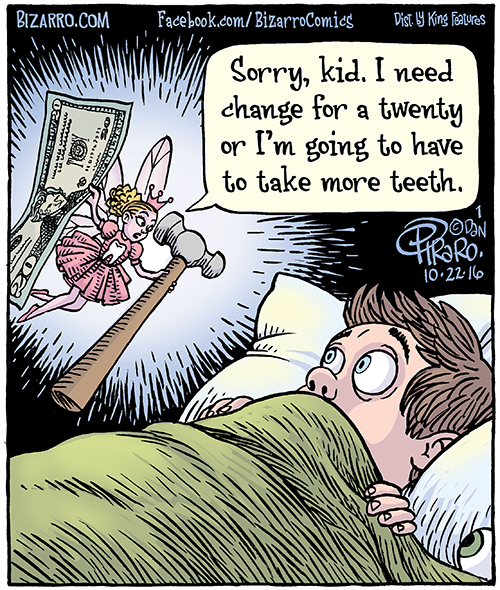 How much do kids get from the Tooth Fairy these days? When I was a kid it was a quarter per tooth. When my kids were young, I think it was a dollar. According to my dad, when he was young he got a morsel of coal which he could then light on fire and bask in the minuscule warmth of for ten or fifteen minutes before going back to the tomb-like cold of his family’s shack. Donald Trump reportedly got a thousand bucks per tooth, and if that wasn’t enough to gold plate some small object of his fancy, homeless street orphans were brought in for him to pull their teeth out with pliers so he could sell them to the Tooth Fairy. True story. Believe me.

Thanks for joining me for another post, Jazz Pickles. And thanks to the big crowd of lovely folks who came to my talk last night at the South Pasadena Library. It was terrific meeting you all and an honor to make you chuckle.

My new book, inspired and inspiring for all ages.  (Only $6)

Larger, nicer, limited-edition, signed and numbered, museum-quality, framed prints of some of my favorite Bizarro cartoons. ( $200)

Also some framed original Bizarro art from that same site. ($1000)

I also encourage you to feel the satisfaction of supporting the arts by making a one-time donation or monthly contribution to Bizarro. As newspapers shrink in numbers and pay less for comics, it’s getting harder for guys like me to stay in the game since most folks read my work for free online. A few bucks a month helps keep the comedy cogs cranking and is much appreciated!