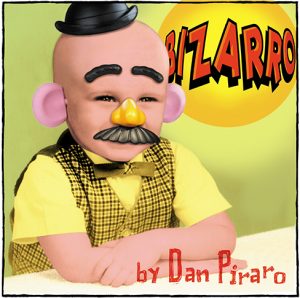 (To enjoy the embiggenation of these images, click on any object with corners.) 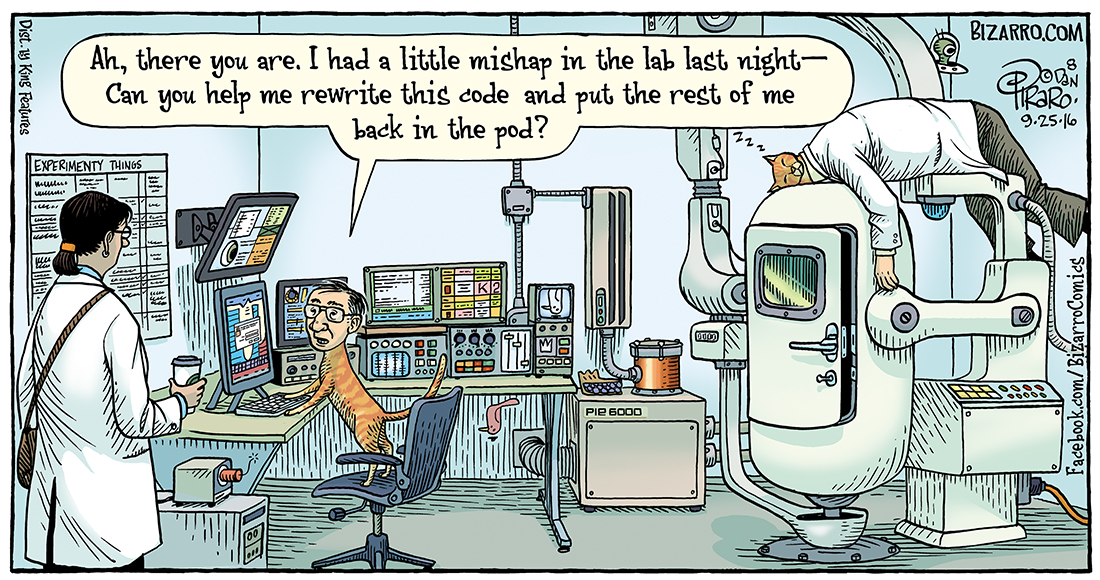 Bizarro is brought to you today by Odd Body Parts

Because I was out of town last week and did not post my week’s cartoons, this post includes TWO WEEKS OF CARTOONS!

Let us begin with last Sunday’s double-wide comedy cavalcade about a lab scientist doing some kind of experimenty thing that ends up switching his own head with that of a house cat’s. If you’ve ever had this happen, you know how funny (and embarrassing!) this can be. What’s more, the cartoon has 8 secret symbols, so click it, embiggen it, and commence counting. 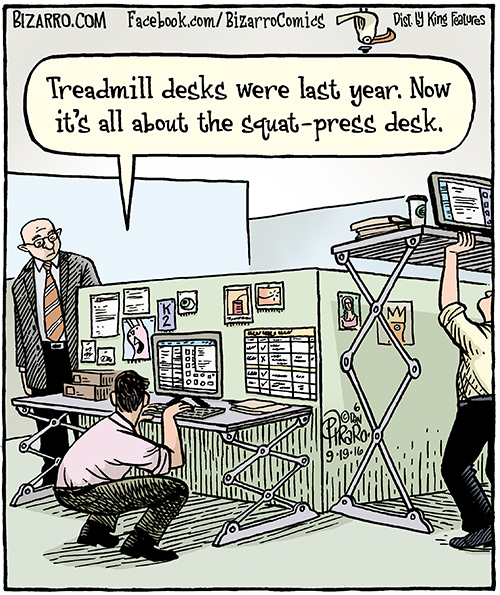 A couple of years ago there were some articles about how sitting down all day is as bad for your body as chain smoking heroine while eating chocolate-covered french fries, and that no amount of exercise can undo the damage, so a lot of people were buying standing desks. Some standing desks have a treadmill so you can exercise and not-sit-down at the same time. I figure other kinds of exercise desks can’t be far behind.

I stand up while working sometimes but my main form of exercise is arguing with people on the Internet, which can be exhausting. 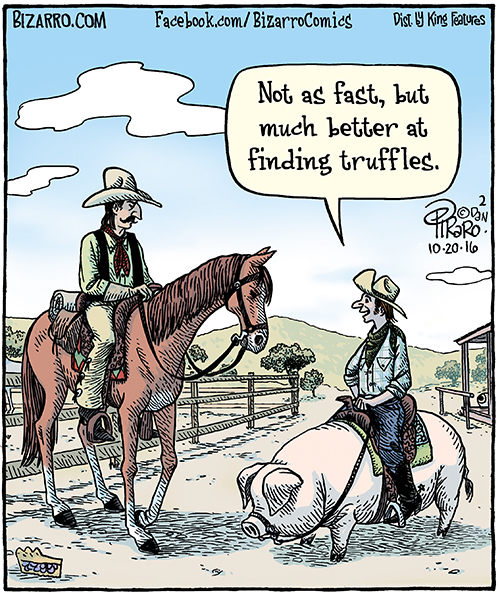 This is a joke about a cowboy on a pig. If you really love mushrooms, you might think it is funny and forward it to a friend of yours who also loves mushrooms. Other than that, I don’t have a lot to say about it. I’m not a big fan of mushrooms unless they make you see funny things. 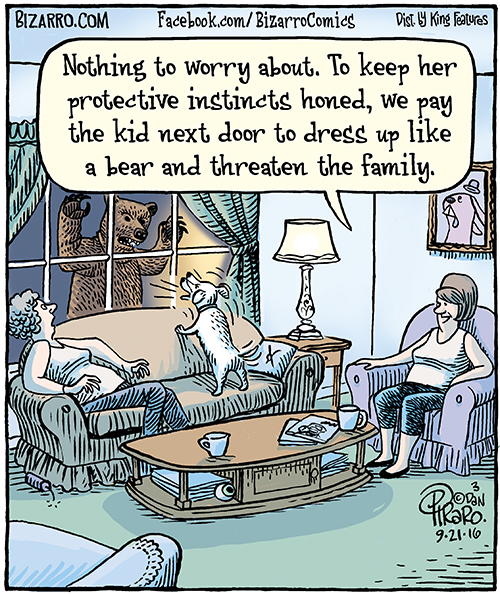 Dogs evolved to be of use to humans not only as companions, but also as hunters, herders and guardians. In our modern world, dogs often report that they do not have enough to do, are bored, and cannot think of ways to be of use to their humans. I think it is good to challenge them from time to time, even if the circumstances are phony.

I don’t watch TV news anymore mostly because it is too ratings-driven and so they cover “exciting” nonsense rather than less-exciting issues that actually matter to human history. I get all my news from the Washington Post, The New York Times, and NPR, so I don’t miss the TV bullshit coverage at all, and one of the aspects of TV news that I really love doing without is all of that extra information they run across the bottom of the screen while they’re talking about the main story––the “news crawl”. No wonder our species’ attention span is shrinking faster than (could someone think of a punch line for this sentence and leave it in the comments section, please? Thanks.) 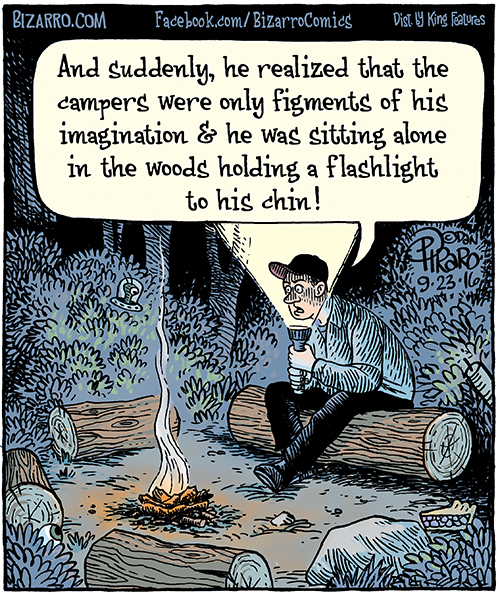 I enjoy starting with a cartoon cliche and finding a surprising punch line for it. The spooky-story-around-a-campfire motif has been used a lot in the world of gag cartoons, but I’ve not seen this angle on it. I was alone in the woods at night one time and it was scary as hell. I admit that this was entirely because I was raised in cities and am now incapable of surviving for more than a couple of days in the place where my species evolved: nature. If there is some kind of apocalypse and the entire technology grid crumbles and we’re all on our own, most of us modern first-world people will be wishing we were good buddies with one of those hillbillies who’ve been prepping for the hostile government takeover or a zombie apocalypse. 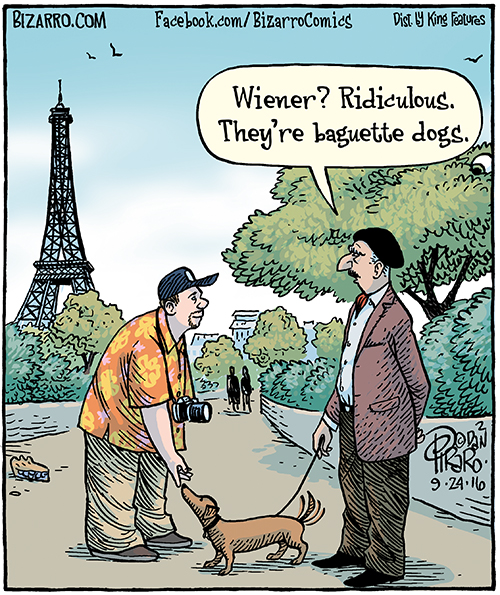 And the Chinese call them “long-grain rice dogs”.

This one’s about the ubiquitousness of pumpkin-flavored stuff this time of year. Each autumn there are numerous cartoons and articles and jokes about “pumpkin spice” so I thought I’d go completely over the top and make it the actual reason her stomach is big and round.

On a slightly different subject, did you know that it is not unheard of to get a tattoo of your baby’s ultrasound? Sadly, it is not. And if you’re looking for an equally terrible idea for a tattoo, you might wait a few months and do this. Yes, this is deeply distressing but in a free society you have to be willing to let people do stupid things if they want to. 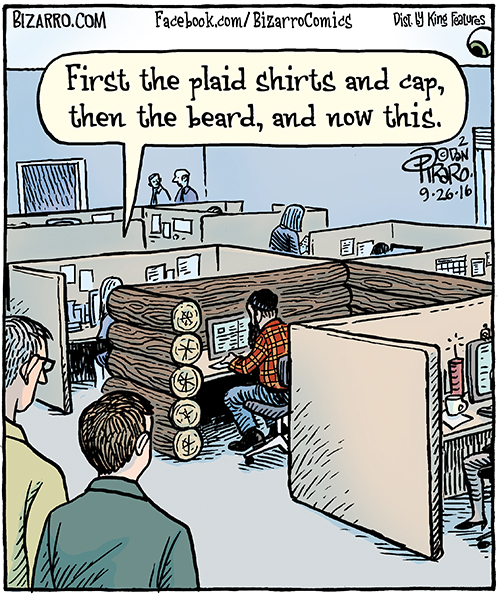 I know this big beard fad won’t last forever and it’s always amusing to make fun of people who jump on bandwagons, but I have to say I really like the big beard thing. I’ve long been an advocate of eccentric beards and mustaches and have worn a crazy mustache myself for decades. If I had the right kind of beard, I’d grow it to be much bigger and stranger but, unfortunately, this is just another of many ways in which god has cursed me biologically.

Still, the popularity of the urban faux lumberjack look is ironic considering what I was talking about above regarding the average American’s inability to survive in nature. For reals, though, how cool would a log cubicle be? 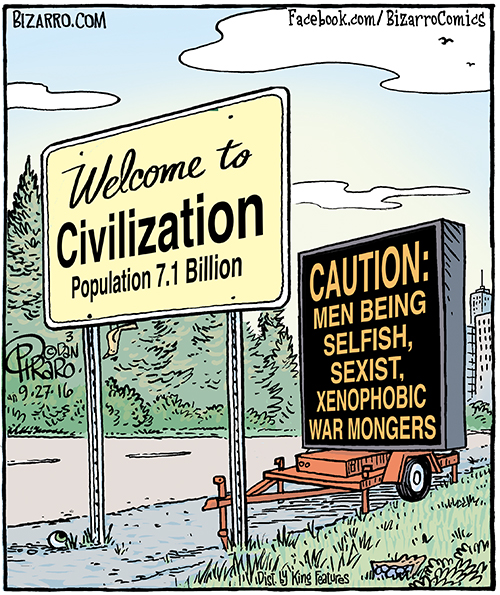 This cartoon got a few really angry emails and comments. I figured it would draw a little criticism but I didn’t expect people to take it personally. Here’s a typical one:

“Until today I have generally enjoyed your humor. But I will read your squib no more. There is nothing even pretendedly humorous about today’s hate-message against all men. Your misandry is going along with today’s popular Big Lie, which presumably makes you feel righteous. But it means only that you have joined a huge mass of people with innocent blood on their hands, because words have consequences.”

I politely thanked this guy for his comments and asked him what the “Big Lie” is and what “blood” I have on my hands because of my words, but his email address was incorrect and my reply bounced back. I’m guessing maybe this is one of those white males who is tired of being blamed for everything. I get that. Not all white males are bad. I’m a white male and I don’t think I’m bad. But it is undeniable that white males have been in charge of most of the world for most of human civilization (approx. 10,000 years) and are behind the overwhelming majority of incidents of racism, injustice, war, child abuse, sexual molestations, environmental abuse, and institutional violence of just about every kind. That’s not to say that any other style of human (black, brown, female, etc.) might not have done the same terrible things had they been in charge all these centuries, nor is it to say that all males have done terrible things, but it is undeniable that many males have done these things and the vast majority of women, as a group, have not.

One last note: that guy’s second sentence sounds like he might have traveled here from the 19th century, so perhaps he’s dealing with all kinds of crazy time-travel issues I know nothing about. 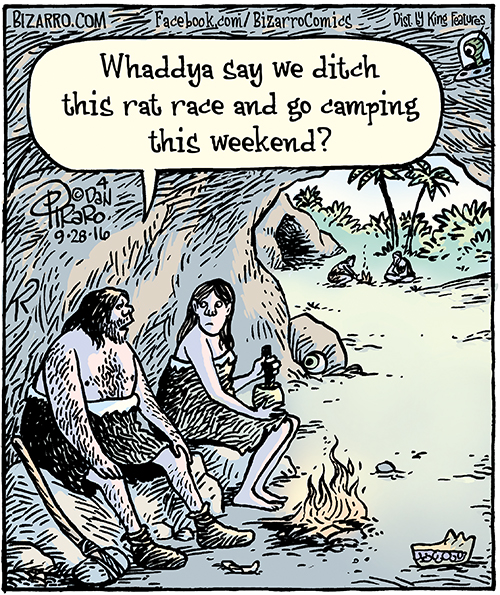 I guess when I wrote this week’s gags I was on a kind of kick about the rat race that civilization has become. From the urban office dude who dresses like a mountain man, to the “civilization” joke, to this cave man talking about going camping, there’s a similar theme here. 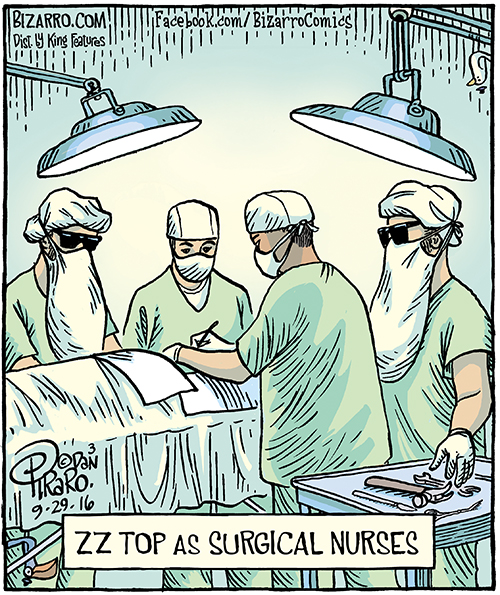 I think this ZZ Top gag got the most chuckles out of me this week. Just good, old-fashioned stupid fun with no deeper meaning. In addition to the “civilization” theme, I guess I was thinking a lot about beards this week. 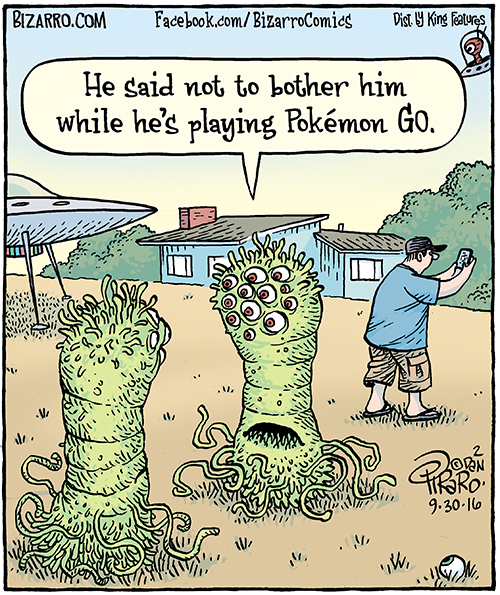 This Pokemon gag isn’t all that original, I know. I’ve seen a few other cartoons about the amazing things people are missing while they’re busy playing that game. I wrote it just after the game made headlines but the way newspaper syndication works, it takes weeks for me to go from a written idea to a published cartoon so “getting there first” on current events is difficult for me. 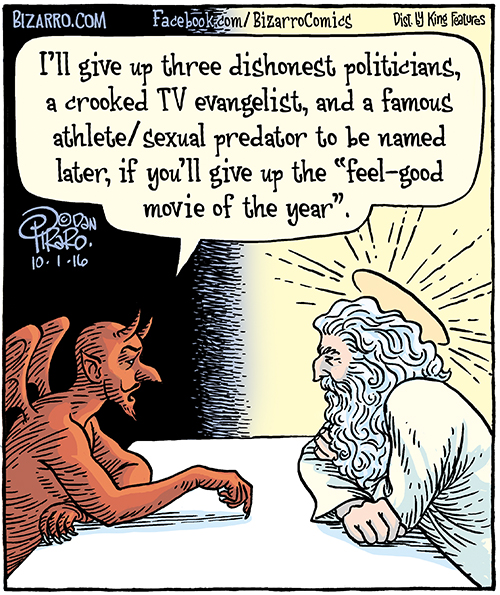 My last cartoon for the week is this mythological moment between the god and the devil made famous by the super popular desert religions. “Feel good movie of the year” used to be a term you’d hear a lot but I think maybe nobody says it anymore. Oh well.

That’s it for these two weeks, see you next Sunday. In the meantime, a special thanks to those of you who have donated a few bucks or who contribute monthly to Bizarro via my Tip Jar to keep me able to post my cartoons for free on the web. Your support is much appreciated!

Another great way to support my efforts to keep you smiling is by buying a print of any Bizarro cartoon from the homepage of Bizarro.com.  Just find a cartoon you like using the calendar function below the cartoon, then click “Buy Prints”.

If you’d like a larger, nicer, limited-edition, signed-and-numbered print, or a piece of original hand-drawn art from Bizarro, go to this groovy LA art gallery website!